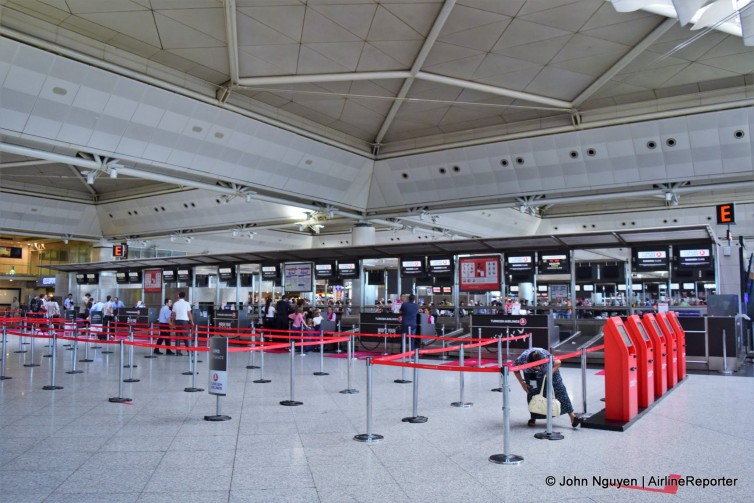 We arrived at Istanbul Ataturk Airport approximately two hours from departure on the Havatas bus, which drops us off on the departures level; we had to get upstairs to the check-in counters. To even enter the International Terminal building, every passenger and visitor must clear a security screening as thorough as a regular airport checkpoint, so sometimes these lines can back up. This is in addition to the passport control and secondary security checkpoint to get to the the boarding gates.

The entrance closest to the Turkish counters was backed up, so we found another entrance that had no line, and effortlessly entered the check-in area. 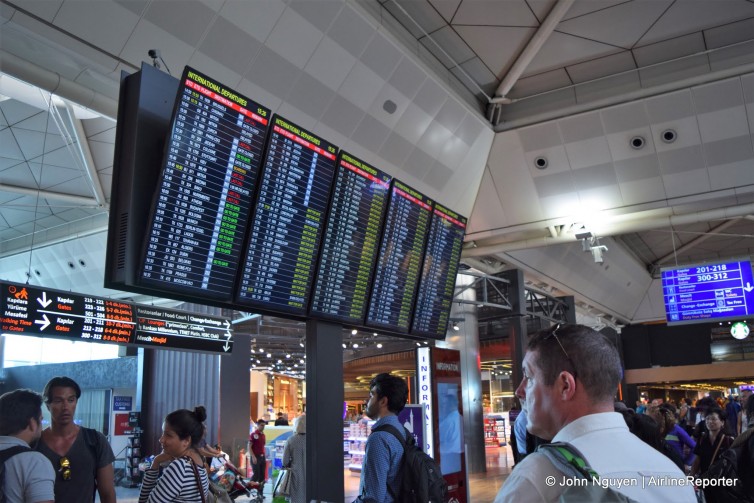 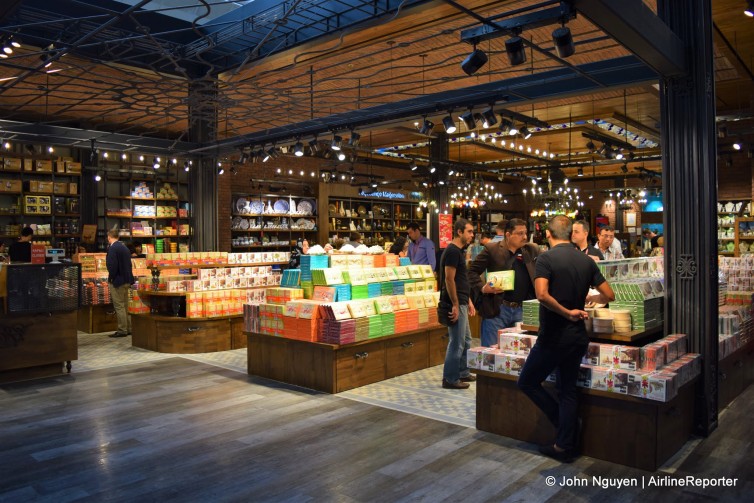 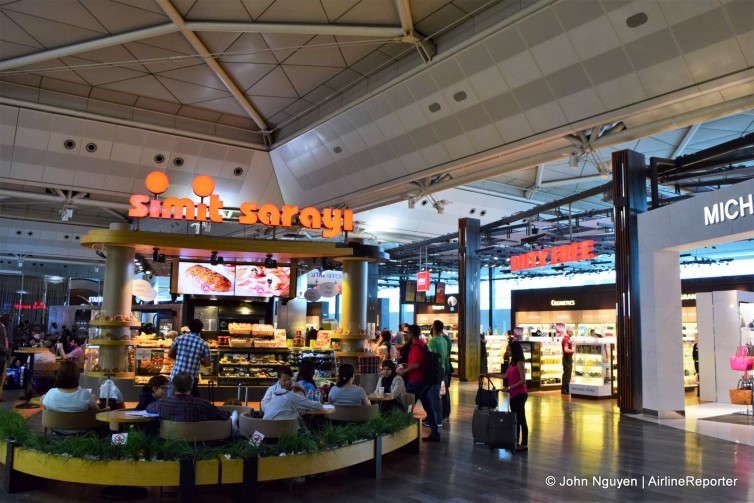 Pro tip: At many airports, there are multiple entrances to the secured area. If one checkpoint is crowded, ask if there may be another less crowded one you can use.

Not having elite status with any Star Alliance carrier, we would have to travel as mere muggles on this trip, but fortunately the lines for economy check-in weren’t long. With no bags to check, we grabbed our boarding passes and headed towards passport control and the secondary security check. We passed through in under five minutes, without having to take our shoes off!

Immediately beyond passport control, the duty-free shopping area greeted us with its wide array of items just begging to be taken home. From the typical liquors and fragrances, to local delicacies like Turkish delight and baklava (free samples!), temptation abounded. 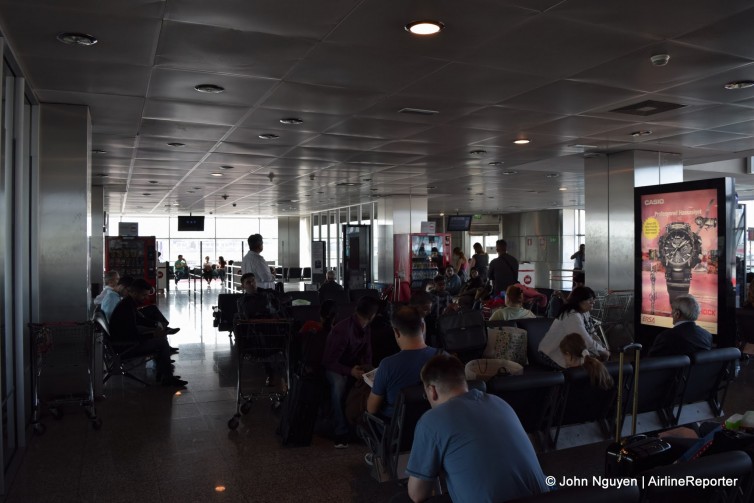 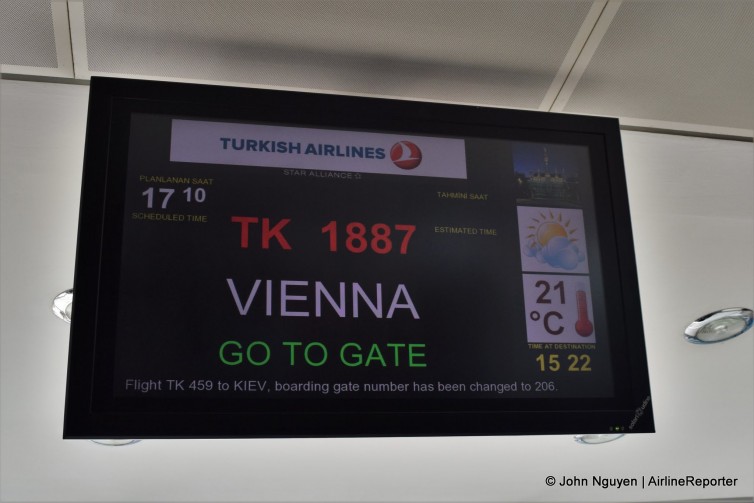 Gate monitor for our flight to Vienna 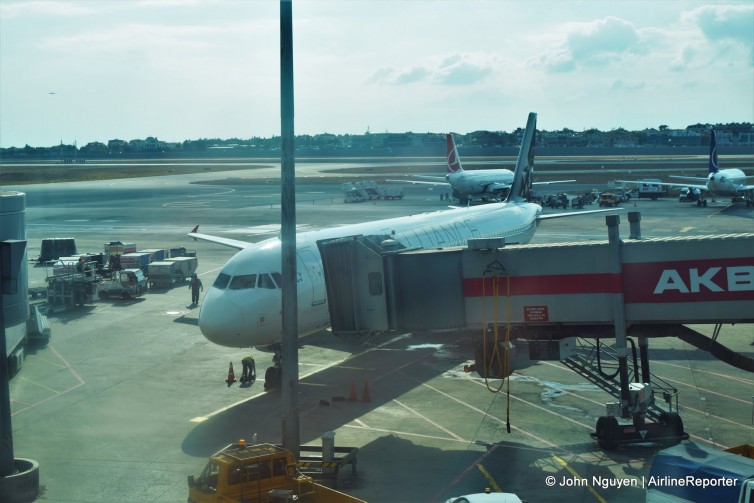 Our Turkish Airlines A320, in Star Alliance livery, to Vienna.

We initially went to the gate indicated on the departures board, but upon arrival it showed that our flight had switched to another gate farther down the concourse. No harm, we continued another few hundred feet and at last reached our darkened departure gate, with no flight information posted on the screen. While it was a sunny day, all the interior lights in the area were off, which made the area dim. Coupled with the lack of adequate air conditioning, it suggested that the airport was on some sort of energy saving plan, which during a hot summer day did not a happy passenger make.

The ground staff didn’t arrive until 20 minutes prior to departure, and the aircraft didn’t appear until five minutes prior… yet everyone claimed that the flight was still on-time! Of course I knew better and started wandering around. 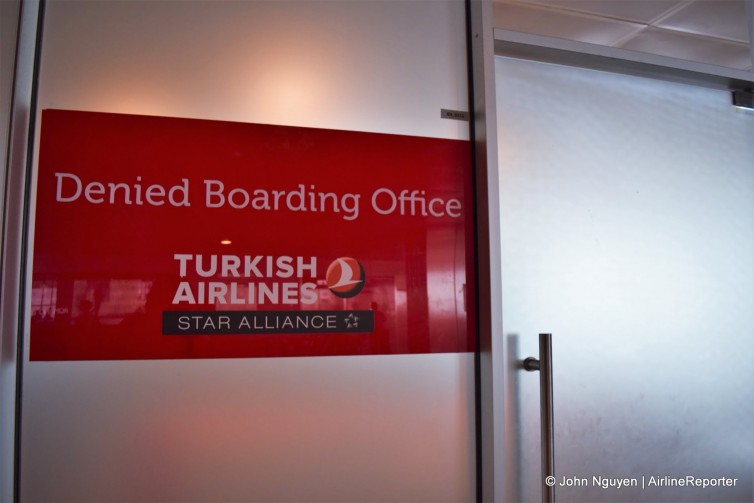 A whole office for passengers who are denied boarding 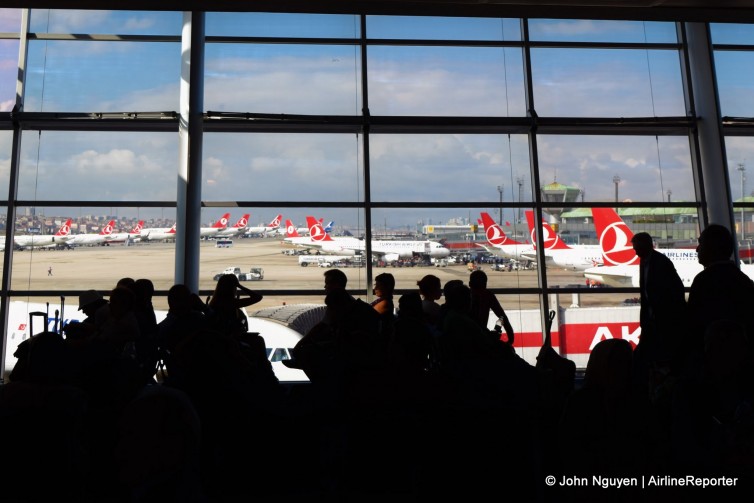 Overlooking the ramp from the international terminal at IST 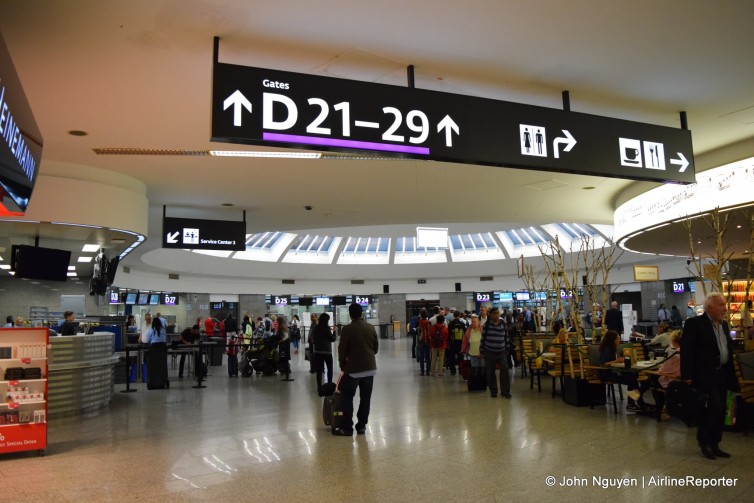 Thirty minutes past our scheduled departure time, boarding was announced for our flight. Turkish uses roped lanes, with business class and elites boarding first, then by economy sections starting with the rear third of the cabin.  The lanes remained empty until the boarding announcement was made, after which the passengers dutifully queued up in their respective lanes… very controlled and organized.  There was a preboarder, which highlighted IST’s unique motorized wheelchair for disabled guests where the attendant actually stands and drives the chair like a powered trolley.

Turkish equips its Airbus A321s with a convertible Euro-style cabin, where all the seats are economy, but the first rows can be converted to business class seating by blocking the middle seat and moving a dividing curtain between the sections.  We boarded one of their Star Alliance-liveried aircraft and took our seats in row 7, which is within the convertible section, however our flight only had three rows of business configured for this trip.  Since the flight wasn’t full, we had reserved seats 7D and 7F, hoping that the middle seat would stay open (which it was, though we didn’t want to receive the crews ire by flipping down the center armrests).  The legroom was average, with about three inches of room between my knees and the seatback in front of me.

Pro Tip: For a potentially more comfortable flight, reserve your seats with an empty middle.  If it ends up being occupied, you will very likely be able to barter with that passenger for one of your window or aisle seats. 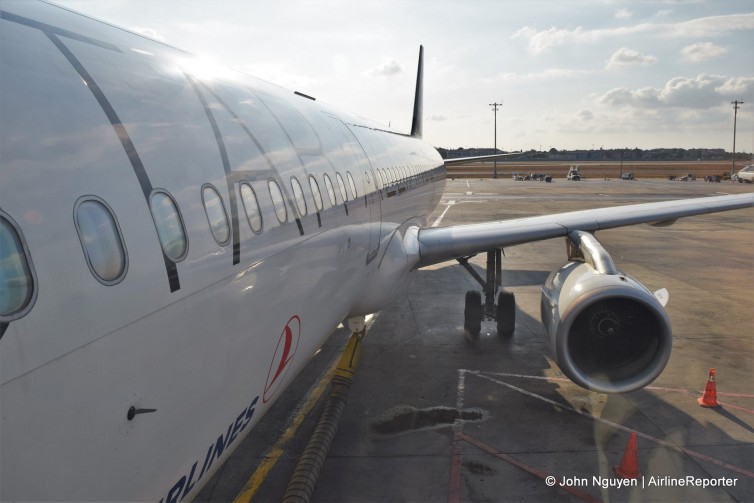 Our Turkish Airlines A320 to Vienna 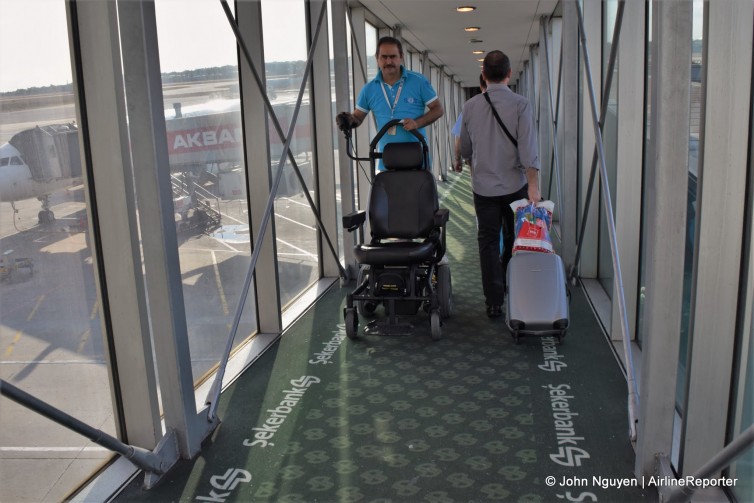 Down the jetbridge, whilst IST’s clever disabled passenger trolley comes back up 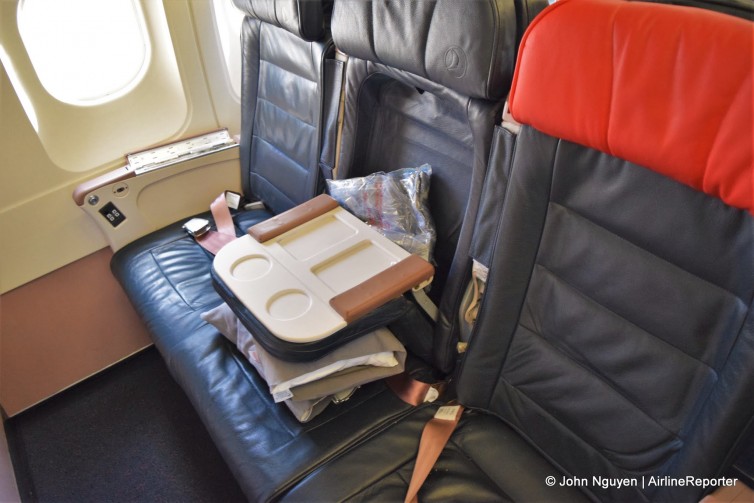 Right after the door closed, the flight attendants came through and handed out piece of Turkish delight candy to each passenger – a very nice and unique touch.  Naturally, I dropped mine; the wrapper saved my piece, but powdered sugar covered my shoe. It was still tasty (the candy, not my shoe).

Shortly after, menu cards and complimentary earbuds were handed out, while in front of the curtain I spied an onboard chef serving dinner to the business class passengers.  After a standard beverage service for coach passengers, the chef came to the back to help with the meal service.  I’d be lying if I said having my food tray handed to me by a guy in a chef’s hat didn’t make me chuckle. 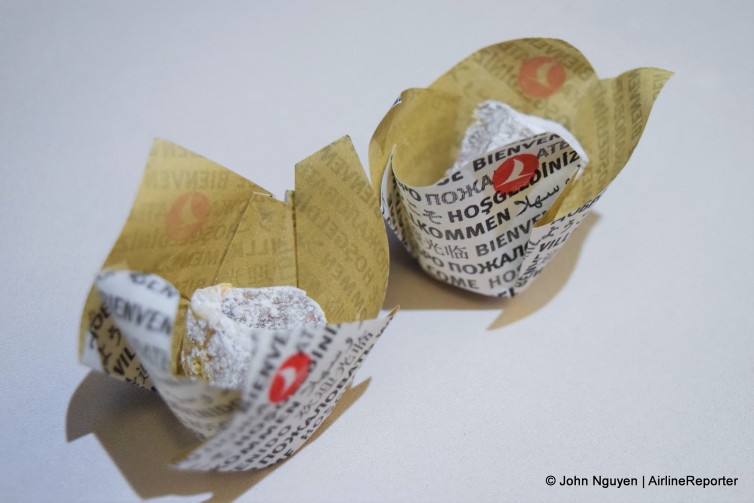 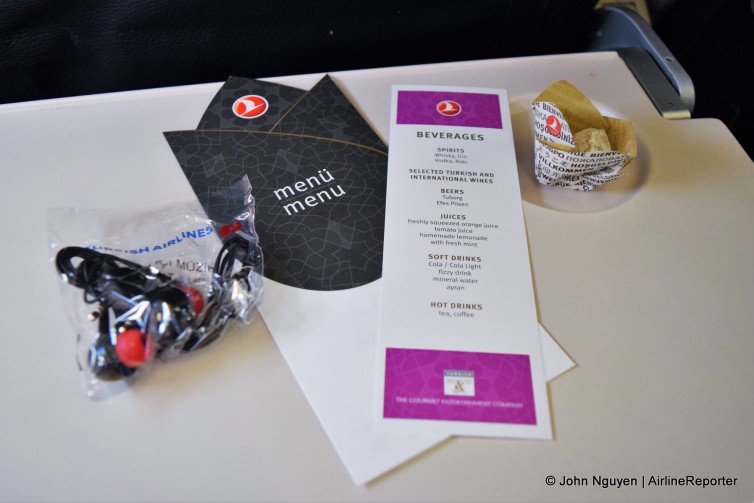 Menu card and offerings for Economy class on Turkish Airlines 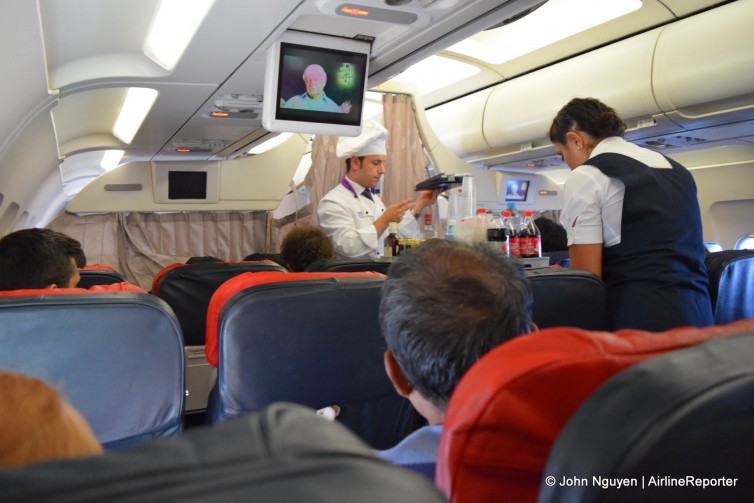 Why yes, that IS a chef serving Turkish economy passengers their meals #PaxEx

I’m old enough to remember hot meals in coach in the US, so Turkish having a full meal service made our flight very pleasant, especially for a flight under two hours.  The pasta was a little soft, but the rosemary cream sauce was delicious.  I liked the curried chicken with rice more; the curry flavor was more subtle than overpowering.  Both entrees came with an okay potato salad and a good chocolate mousse for dessert.  All in all, a decent airplane meal. 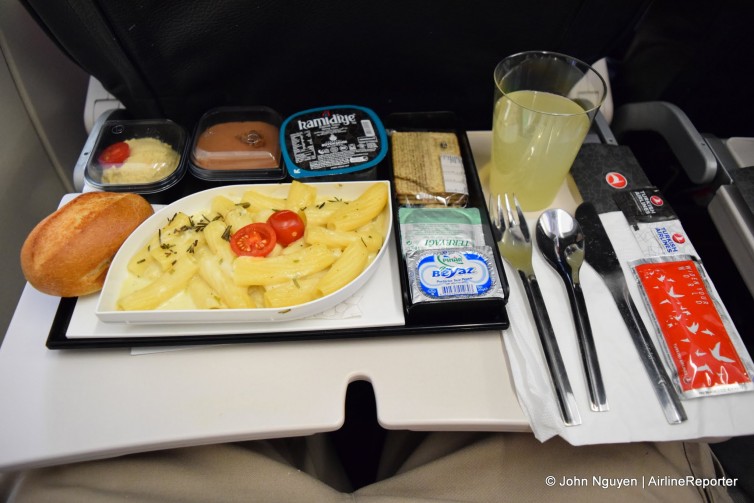 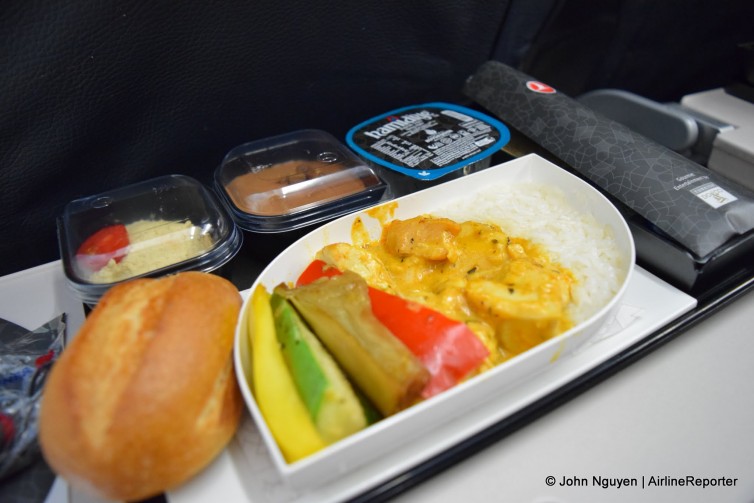 In short order, we arrive into a hazy Vienna International Airport. A quick taxi, short line for passport control, and we’re heading into the city for the next chapter of our adventure… 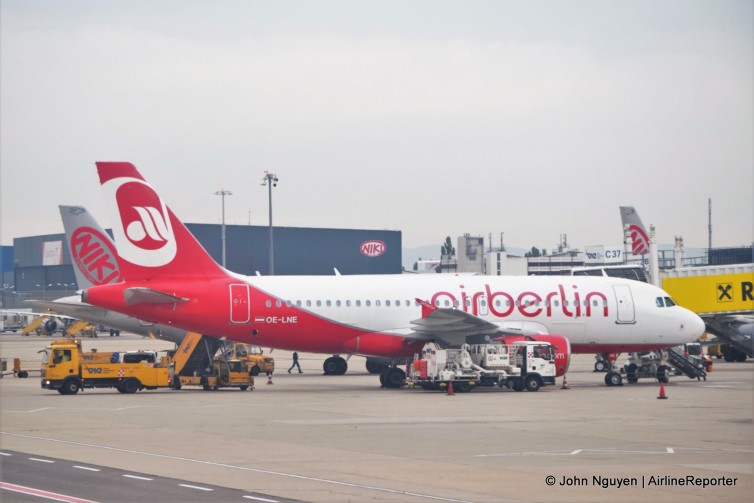 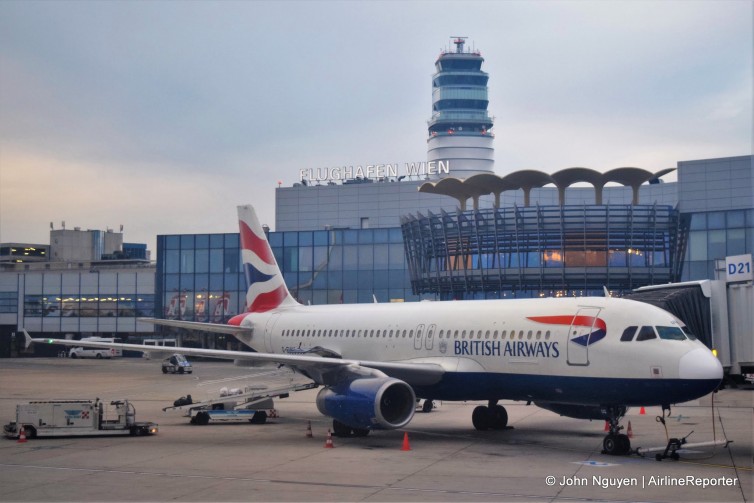 When did Turkish join Skyteam? 😉

Indeed, that’s a funny looking Skyteam livery, isn’t it?? Thanks for catching that… I’m usually a Oneworld guy, so Skyteam, Star Alliance… it’s all the same to me 😉