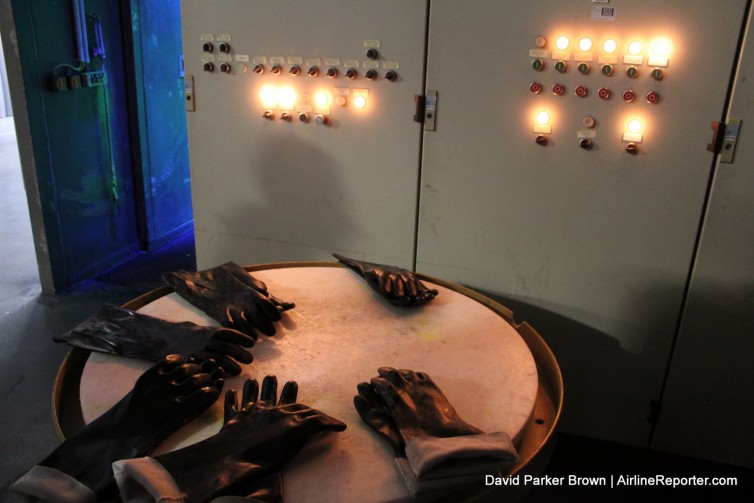 Where are we? Is it Halloween?

Engine parts are removed and inspected for cracks in rooms that more closely resemble a Halloween haunted house than a state of the art machine shop. In these rooms, engine parts are sprayed with mineral oil and examined under blacklights. 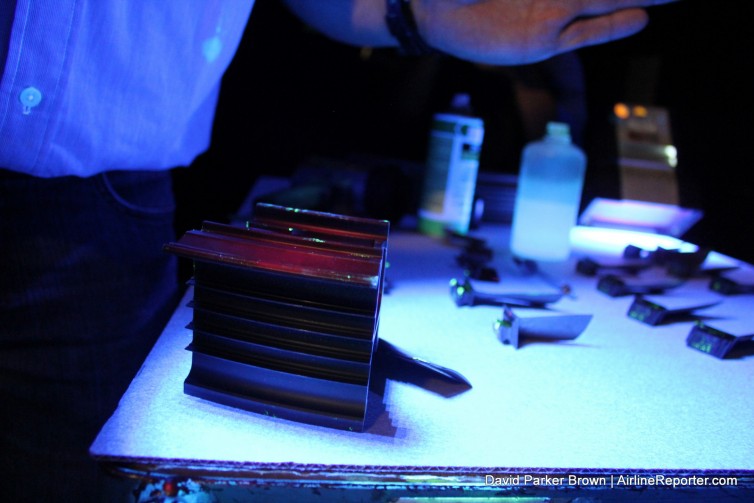 Damage lights up in the black light

Any cracks or dents to the metal are easily identified by the greenish glow, which tells mechanics that the part requires repair, or needs to be discarded entirely. It is one of the strangest (but coolest) things I have seen at any MRO facility. 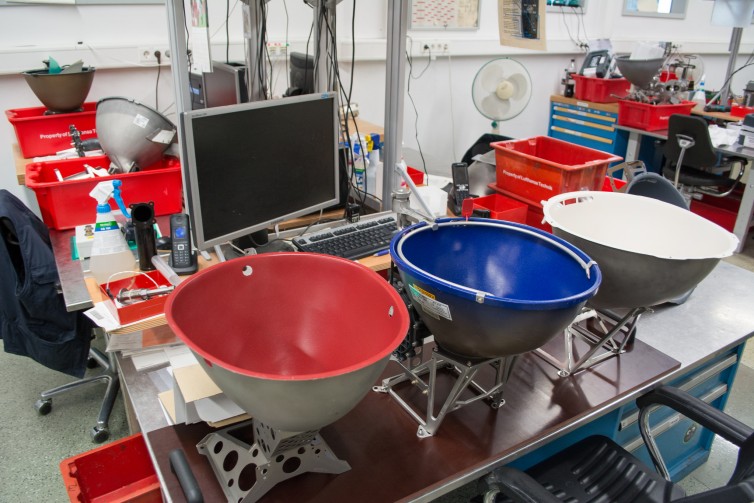 Just down the hall from the engine shop are the lavatory repair and oxygen mask repair centers. At the lavatory repair center, entire toilet assemblies are torn down, repaired, and cleaned in a giant washing machine. You may not think much of the toilet system on a widebody aircraft, but they are quite complex and very susceptible to failure if any external item is introduced. The staff keep some the most interesting items in a glass display case, containing everything from passports to handcuffs that an Air Marshal dropped during a flight. 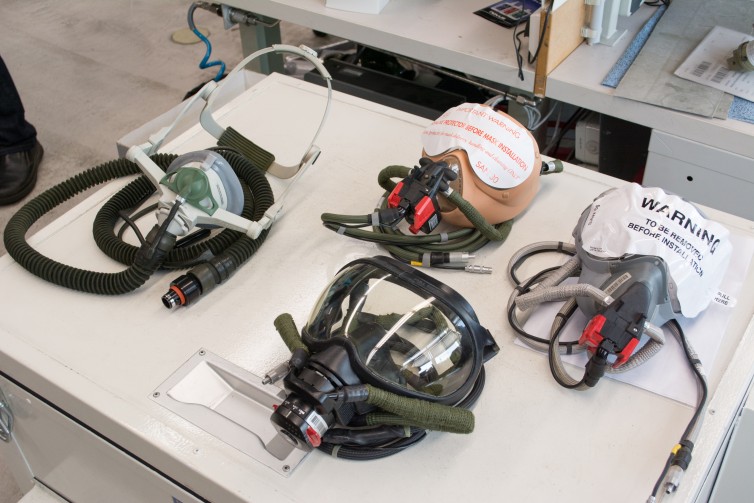 In the oxygen mask repair center, Technik employees repair masks, from the newest 787s all the way back to the DC9. The masks have become increasingly complex over time, evolving from just a mouth piece and strap to full-face protection with integrated microphone and automatically adjusting, self-inflated straps.

No passenger oxygen masks are worked on here, as those are simple disposable chemical generated oxygen kits. If they malfunction or need repair, they are simply discarded. 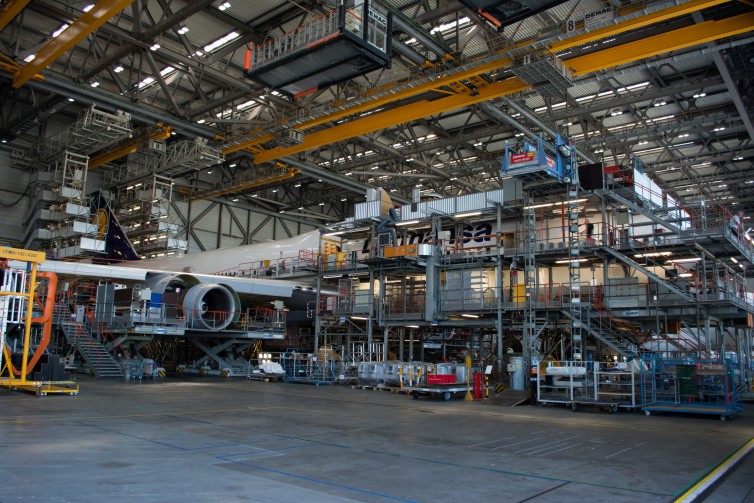 A Lufthansa Boeing 747-400 being worked on – Photo: Jason Rabinowitz

Over in one of the several hangars in Hamburg, the main attraction awaited us. Lufthansa is wrapping up a major widebody cabin update program, and we were invited into see a Boeing 747-400 mid-overhaul. The entire overhaul will take anywhere from 30 to 40 days, and we caught D-ABVM somewhere right in the middle.

BONUS: Photo Tour of an Airbus A380 at Lufthansa Technik in Frankfurt

The crews had just finished installing one section of economy and premium economy seats, while most of the aircraft was stripped down to its bare bones. 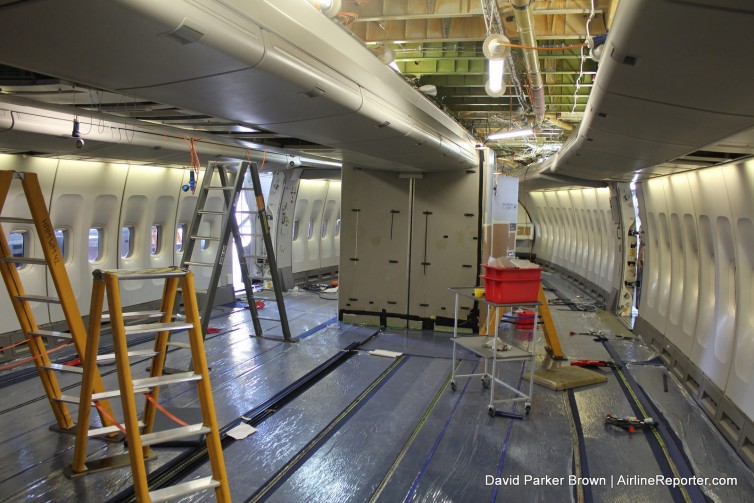 The new ladder section in the nose of the 747

Stepping into the massive 747 without any cabin furnishings installed is quite a strange experience. Everything that was once hidden away behind sidewalls and ceiling panels were exposed, including flight control cables, air conditioning ductwork, and miles upon miles of electrical wiring. In just a few days, everything will be put back in its proper place, and passengers will never know that this aircraft was completely torn down to the frame. 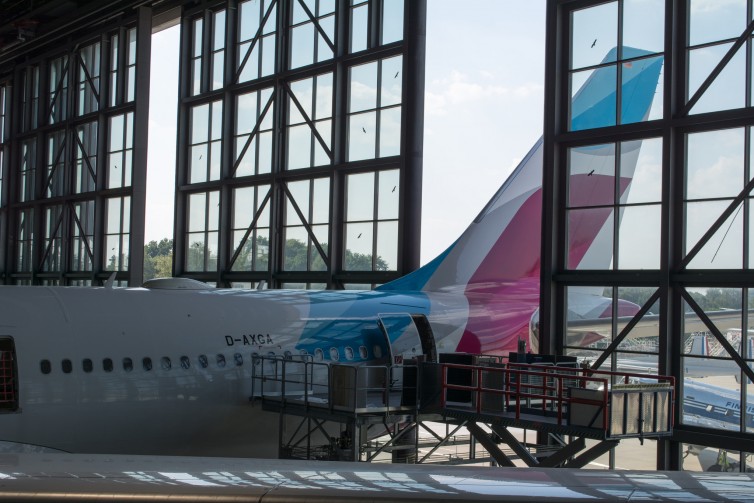 A Eurowings A330 – notice the DC-3 in the background – Photo: Jason Rabinowitz

Right alongside the Lufthansa 747-400 was one of the first Eurowings A330s, also undergoing a full cabin refurbishment before its entry into service. Every piece of cabin interior from its former airline (EVA Air) had to come out in preparation for the launch of Eurowings. 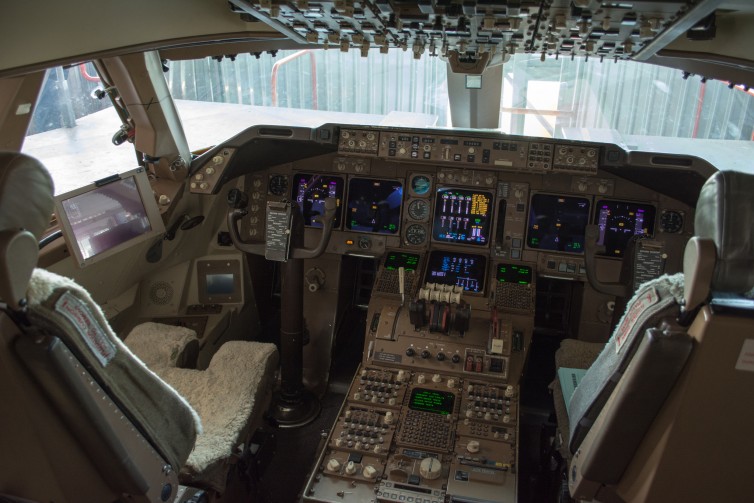 Next to the A330 was another 747, but one that did not belong to Lufthansa. In fact, I’m not even allowed to tell you who it belonged to. Lufthansa Technik is one of the few places in the world that preforms heavy maintenance and cabin preparation for government and VIP aircraft. These aircraft receive highly customized interiors and systems that often keep them in the shop for months, or even years, before an entry into service. 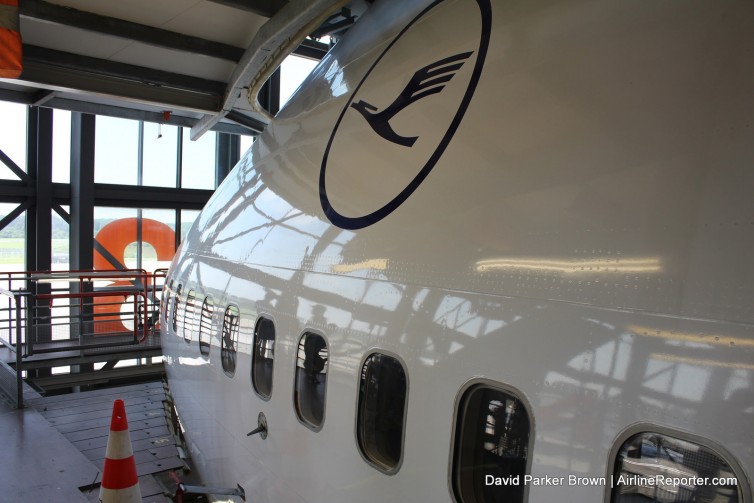 The amount of work that goes into maintaining a passenger aircraft is, simply put, incredible. The technical knowledge necessary to nearly completely disassemble, reconfigure, and put back together an aircraft the size of a 747 is staggering. After seeing the process first hand, I have a new respect for MRO facilities, and might even be a bit more forgiving when an airline says it might take a little longer than expected to furbish its entire fleet.

See more of my Lufthansa Technik photos on Flickr. Not enough, then see David’s on Flickr too.

A great post and pix, Jason. Yes, LH Technik is an impressive organization. The amount of hands-on work required for a full C-Check on a B-744 can boggle the mind. That they can do it, and do it well in 30-40 days must require eight day weeks and 30-hour days. Industry wide, the only item more expensive than a C-Check is buying a new airplane.

Fantastic
i am so proud of being knowing on such stream i happend to participate the airline job as service kraft this talent i didnt use it cose of the new airport in berlin made me unpleasent my dream of work and from this point of view i would rather always looking for a Job and no sucsess wher is thze probem i have no idea but one thing i still bleive that i will my dream Job very soon when i leave this bastard place.and this i know it .please help me!!!!!