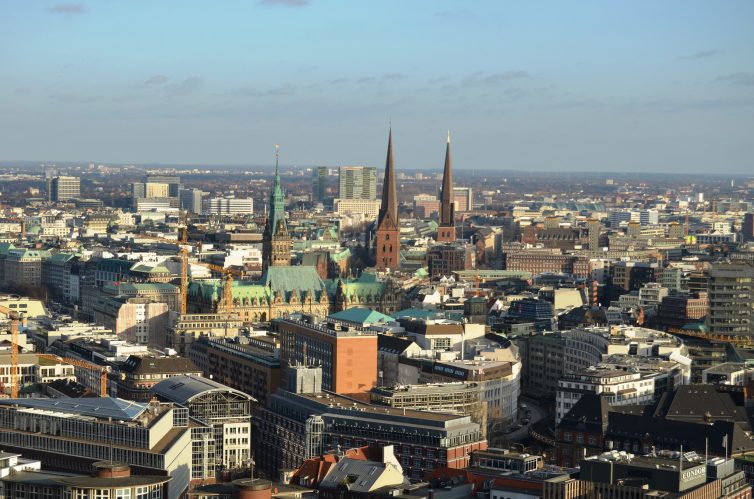 In Hamburg, you have to pay attention.

Things are moving here on the edge of time. A store doesn’t open at 9:59, it opens at 10:00 exactly.  People still have wrist watches not as an accessory, not as a nod to the 90s, but actually use them for their intended purpose. The train / subway / HochBahn is rarely, if ever, late. Only once in six whole months did I see a train come startlingly late (I would consider “startling late” ten minutes), and it caused panic to ripple throughout the crowd. Where is the train? How could this happen? When the HochBahn comes, it opens and closes its mouth within ten seconds and you better already be there to jump in. One time I made it, but my bag got caught. The doors do not wait for anyone or anything. Every four minutes it arrives and leaves. Time is important here, efficiency is important. Hamburg people cannot live on borrowed time, and there is something to respect in this efficiency.

In Hamburg, people stare at you.

Truly, stoically, painfully, everlastingly look at you. Never have a cold sore in Hamburg. Make sure you brush your hair. The staring, the (perceived but often not real) judgement, and the curiosity only increases between the elderly and the children. You feel 15 and awkward again in Hamburg. Why is everyone looking at me? They are not, in fact; everyone is looking at everyone else. Over the months, the stares don’t feel so strange or threatening. You begin to realize that the staring, the looking-for-longer-than-necessary-look is how people interact with each other here. It is different, it is uncomfortable, it can be unbearable and then… it isn’t. Eventually you will stare back.

In Hamburg, fashion is function over form. There are not a lot of bright colors or varieties of clothing here. Sensible black shoes, a Fjà¤llrà¤ven backpack, a jacket that hits your knees that is both waterproof and windproof for the unpredictable dark winter. In some cases, this is a relief. You don’t have to fuss much about your wardrobe in Hamburg. It is easy to wear greys and blacks and the occasional pop of color scarf. You bundle up here. The extreme humidity in the summer means you sweat, but in the winter it means there is a sharper cold. Looking put together, clean, sharp, business ready is very important, but fashion in itself is not. Maybe it is the climate or maybe it is the culture… I can’t tell the difference.

Over the years, I have had many people email me, tag me, and in other ways share with me videos of the Miniatur Wunderland airport, which is located in Hamburg, Germany. I enjoyed watching each one and was quite impressed with the videos.  That said, no words, no video, no photos, not even this story can come close to convey just how freak’n awesome this place is!

I was set to arrive in Hamburg at about 11:00am local time and didn’t have any media events planned until the next morning. That almost never happens — most media trips are packed full of (mostly) good stuff. I always appreciate having some of my own time to explore the area — and Miniatur Wunderland was #1 on my list. I asked Jason Rabinowitz to tag along, who was also scheduled to arrive somewhat early, and we penciled in to head to downtown. He stated that he had been before, but he was totally down to going again — score!