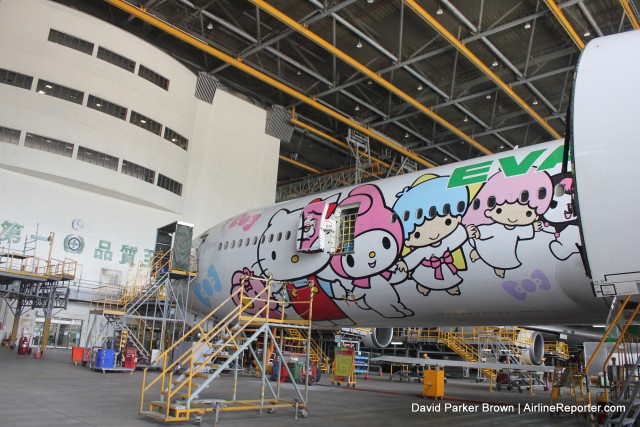 One of EVA Air’s Hello Kitty planes being worked on

My tour started with a nice welcome on their TV screen in the lobby. Then I was met by Kin Chong, who is the executive vice president, business coordination development at Evergreen.Â Â We had some time to sit down, chat, and review a presentation on EGAT. Afterwards, I putÂ on a hardhat (got to love those things) and we made our way into the depths of the facility.

The first aircraft I see: a Hello Kitty Boeing 777. I had to chuckle, since I just flew on EVA’s newest Hello Kitty 777 and thought I might of had a break from the smiling “non-cat” for a while, but I couldn’t seem to get away. Oh well, I re-focused my attention to learning. 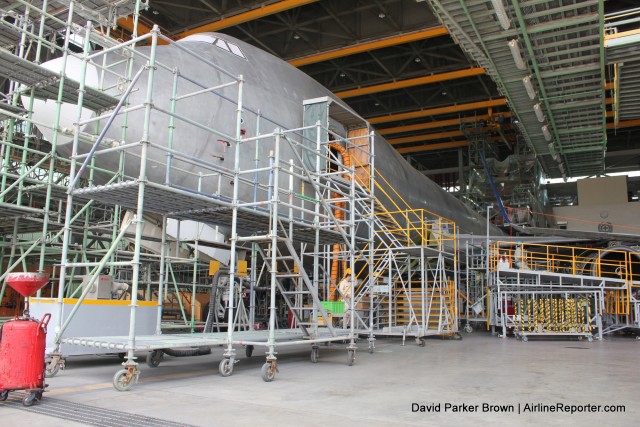 Evergreen Aviation TechnologiesÂ was created in 1991 with only 100 employees and the mission to fix EVA Air aircraft. Today, the facility has four hangars, over 2,000 employees, and works on planes from different airlines around the world. Actually, about 70% of the aircraft today are from other airlines than EVA.Â They do everything from line maintenance, to engine overhaul, to complete nose-to-tail re-skins. 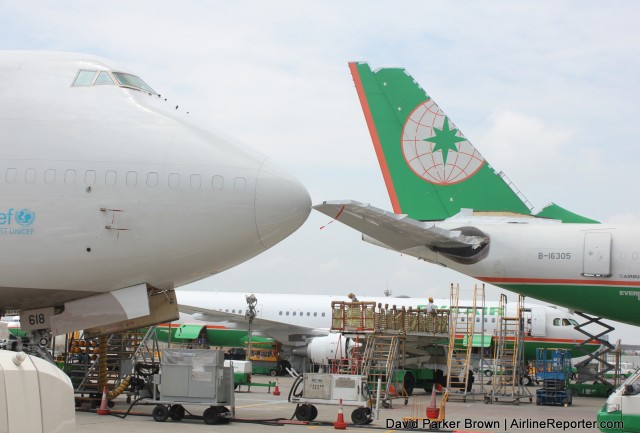 From nose to tail, EGAT takes care of the planes – that is an Airbus A330 tail

The placeÂ is big enough as it is, but there is a fifth hangar being built. The first hangar can handle three wide-body planes, the second can do two wide and two narrow, the third can handle two narrow, and the fourth is a “shelter” that can house just one narrow. This is not to mention the engine shop, offices, inventory, and tarmac space as well. 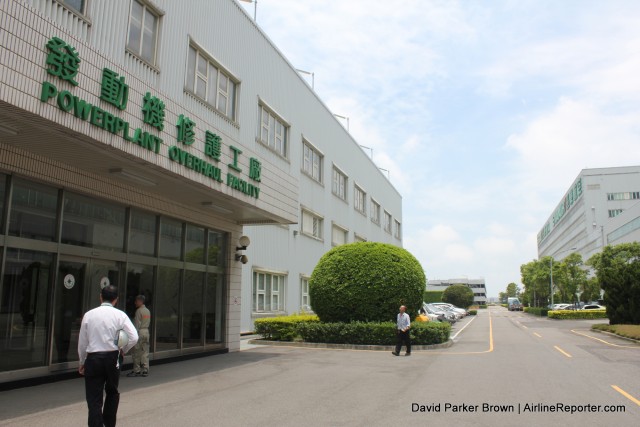 Heading into the engine shop at EGAT

EGATÂ considers themselves a “boutique”Â Maintenance, Repair, and Overhaul (MRO) facility, and their goal is not to just expand and increase profits. They openingly admit that they won’t be the cheapest, but they are still competitive.

Their stock holders are the employees, and they want to work more on maintaining quality and building relationships; those are not always in alignment with rapid growth or huge profits.. Yes, yes, most any MRO is going to say that, but they have a way to make it happen. Actually… that is sort of their tagline: “Make it happen.” 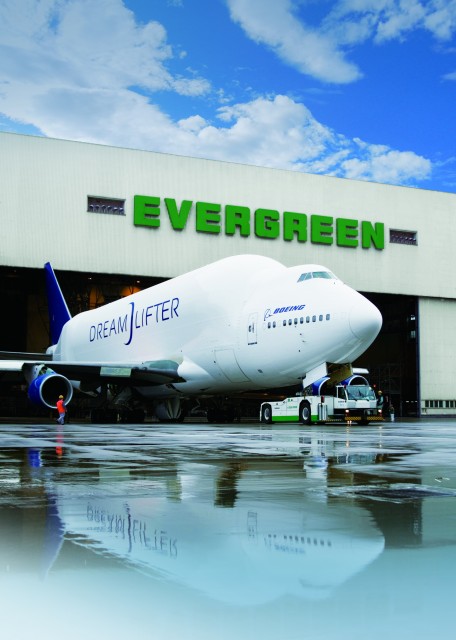 So, when Boeing was asking for a plane larger than the 747 to haul Dreamliner parts around the world… Evergreen made it happen.Â This is whereÂ the 747-based Dreamlifters were born. EGAT won the contract in 2006 to convert four Boeing 747-400s into the Dreamlifters, and then soon delivered. 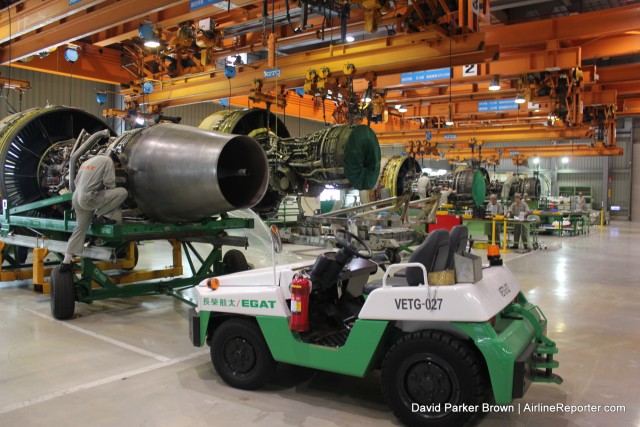 Multiple engines being worked on at EGAT

EGAT works to keep up with new technologies. To help handle the maintenance on the next generation of GE engines, EGAT partnered with GE, creating GE Evergreen Engine Services. Currently, they are set to do quick repairs and the test cell should be ready to handle GEnx engines by September. They hope to offerÂ modular repairs by 2017 and then complete overalls by 2018. The engines are still new, so hopefully none will be needing overhauls before then. 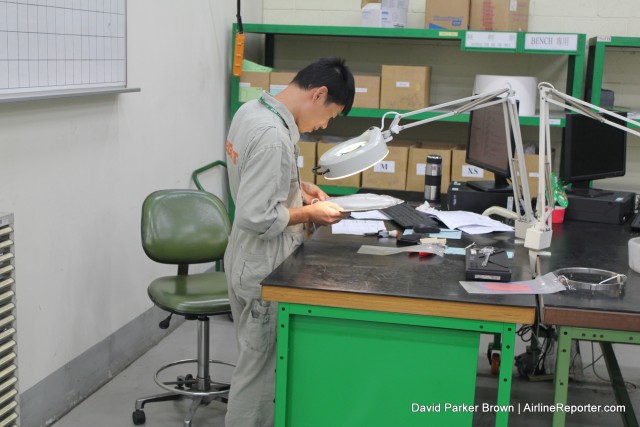 Engine parts being inspected by one of the EGATÂ technicians

Before my tour, I had not realized that when an airline takes delivery of a new aircraft, they often stagger the engines. As in, they will take off one (or even both) of the new engines and swap them within the fleet with used ones. This makes sense. Sort of like replacing both headlights when just one goes out, since it is likely the other might go out soon. The airline wants to have engines on each plane with different hours on them, so that the maintenance timelines will not be aligned. 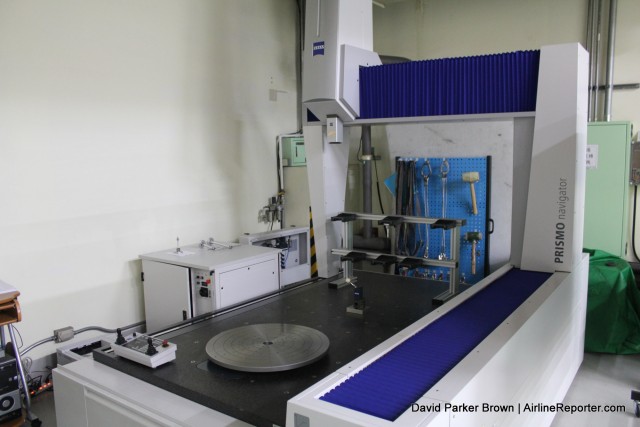 Machine that steam cleans the parts before being inspected further

Even though EGAT might not be fully motivated by profits, they are still looking to be a successful enterprise. When an aircraft comes in for some major work, Evergreen willÂ work with the airline to see if there are any other upgradesÂ to be done while their plane is already out of service. Things like winglets or electronic flight bags can be installed, without adding much time to the plane’s maintenance schedule. 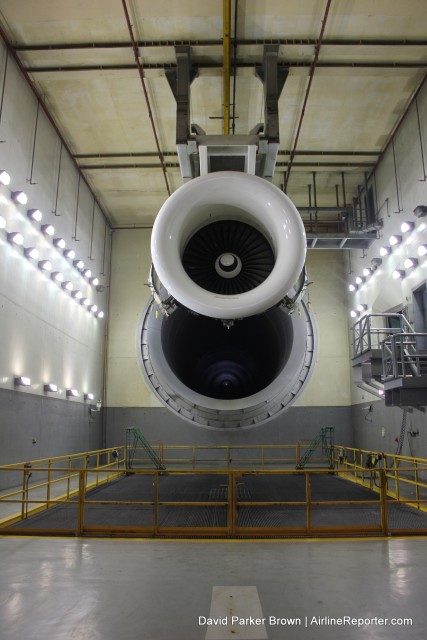 Engine being tested before being put back on the plane

One of the coolest parts of the tour was checking out the 120,00- lb test cell. It was great timing, since there was an engine in place, but it wasn’t being tested. I could only imagine the sound and the amount of wind going through that bad-boy when a GE90 is in there at full-throttle. 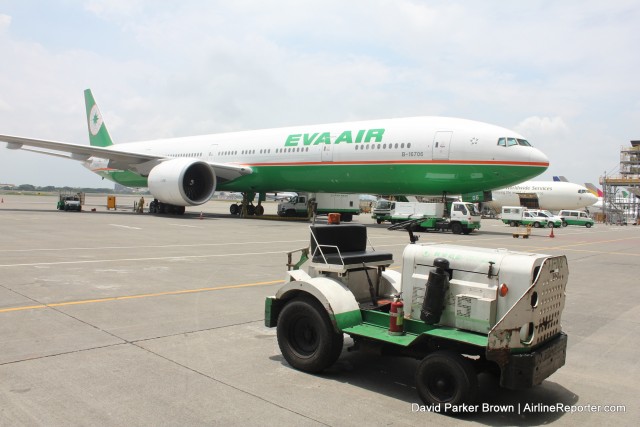 Heading outside to the next hangar. Plus, a nice EVA tug.

By the time my tour concluded, I had interacted with many different EVA Air and Evergreen employees. I have to say that they don’t just talk-the-talk, but they also walk-the-walk. Not just with getting the job done, but also being passionate about what they do and their company.

I think that they got a kick of me doing the tour as well. Even though it was just me and two Evergreen folks, I kept having to ask them to slow down. They weren’t used to having media that not only cared, but was actually a bit giddy — it seemed to excite them. And, of course, I wanted to make sure that I took tons ofÂ photos and also absorbed the AvGeekiness.

I know that if I had my own private airliner jet, I would entrust EGAT to take care of it. And that is saying something, because I would want to make sure that thing is treated like royalty!

View even more photos of my EGAT tour with EVA Air

NOTE: EVA Air flew me to and from Taipei and took care of accommodations as part of their launching service to Houston. Opinions are my own.Â

https://www.airlinereporter.com
Flying in “Fat Albert” with the Blue Angels
Mitsubishi Arrives in Washington State for the MRJ
4 Comments

Learned a lot of new stuff today, most interestingly that the LCFs weren’t retrofitted by Boeing– I always assumed they had been. Cool!

Awesome report David. I think I would have been just as giddy!

Was the A330 with the missing parts on the tail being repaired or scrapped?

Great info especially about the Dreamlifter. I was really surprised to read that it wasn’t designed by Boeing.