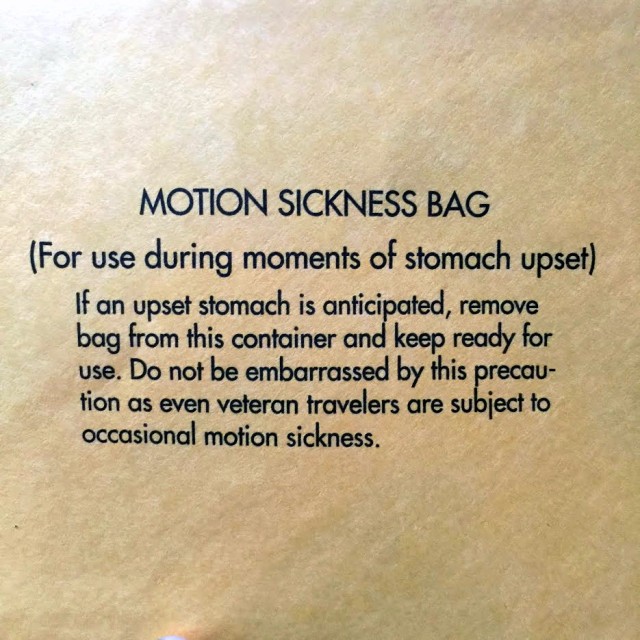 When talking with the Blue Angels, there is a clear atmosphere of trust among the team. As Captain Thomas Frosch, Flight Leader/Commanding Officer, explained, “I don’t pre-flight my jet; I trust my team to do that… I wake up to the sound of my jet being started up.”

In addition to trust, the atmosphere is very high energy. The procedures, such as pre-takeoff checklists are all very routine, so the team stays alert and makes the procedures more fun, such as by singing through their checklists.

Listen to the pre-takeoff checklist be performed in the video below; it is quite different and exciting:

While pre-takeoff checks were being performed, I was checking and double-checking my seat belt. Despite all the talk of negative-G scenarios and cell phones flying out the back ramp, I was secured in with no more than a normal commercial airliner seat belt.

The seats were mostly bench seats, which went sideways along the plane, rather than forward-facing rows. The exception to the bench seats was a metal beam, near the ceiling of the plane. One lucky passenger, which last Friday happened to be a guest military personnel, got to sit on this metal beam and stick their head into the clear, bubble-shaped window in the roof! 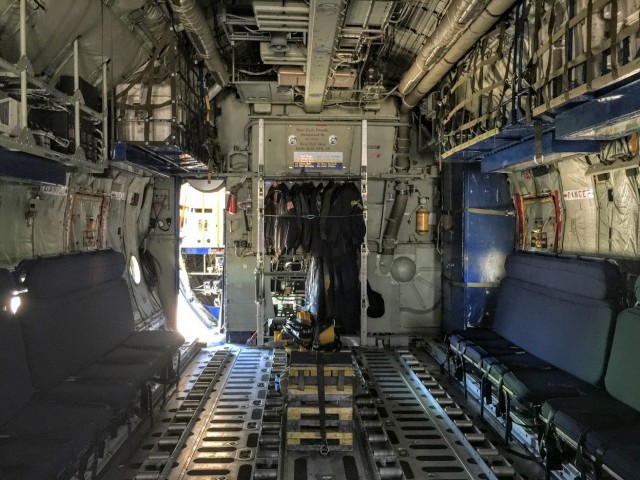 Anticipation built as we taxied down the runway at Boeing Field. The crew sat at the end of the open ramp, casually waving to the crowds. This was just another day for them. The girl on my left, the young military man on my right, and I all looked at each other for visual reassurance that our seat belts were properly fastened as we tried to determine if the ramp was going to close. It eventually did, which brought a combination of relief and disappointment.

While passengers were required to remain buckled in, the crew gave quite the show, holding on to a stationary ladder with their hands, so that their feet would fly up to the roof during negative-G moments. The weightless came in short, but exciting moments. The duration was just long enough to notice a pen stay steady for a slight moment. Luckily, I was able to experience this three different times during the 10-15 minute flight! 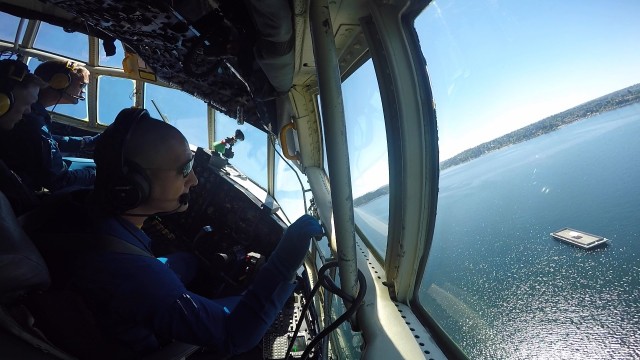 Apart from the moments of unusual G-forces, the ride was surprisingly smooth and steady. The few windows that exist in the rear of Fat Albert are quite small, so the visual aspect of turns is hidden from passengers, possibly contributing to the perception of a smooth, steady flight. However, the detailed briefing showed that the flight was truly composed of intense maneuvers. In our video below (I was able to put a GoPro camera in the flight deck), you will see that the C-130 does many maneuvers such as low-level flying with very steep banks and dramatically pitched descents, especially on landing.

The next video shows  the nose-down landing that was a very intense part of the demo flight. While very dramatic from the flight deck, I did not feel much force from this descent in my sideways-facing seat. Looking back, I am very impressed with how smooth the landing was, especially with our speed and weight.

Concluding the flight, I had the opportunity to talk with the team a bit. It was clear that many of them have graduate-level and post-graduate education backgrounds, coming from diverse experiences. For example, while Captain Katie Higgins and Major Mark Hamilton are both C-130 pilots, Higgins has degrees in political science and international security, while Hamilton studied psychology. 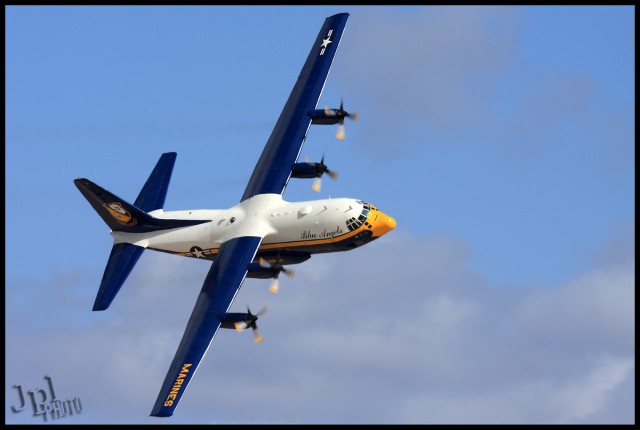 Coming out of this entire experience, I left inspired, not only by the team’s collaboration and piloting skills, but also their general communication ability and charisma. The crew was excited to meet me, teach what they could in our given time, and were truly passionate about their work. The Blue Angels are an example for us all, not only in their aviation abilities, but also in their life skills, such as team work and communication.

It was nice meeting you last Friday. We sure had a great flight of a lifetime, eh?

Good work and way better GoPro work than I did.