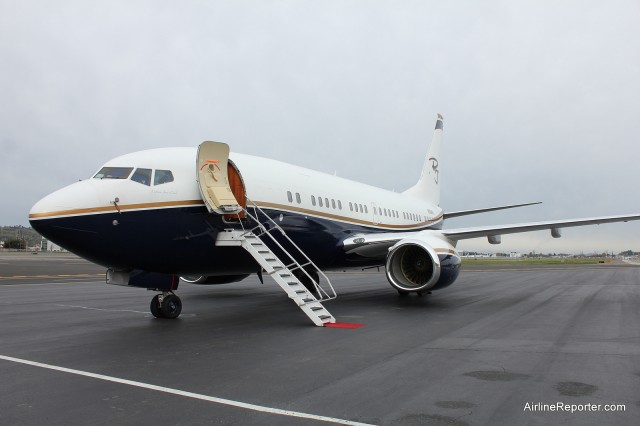 This BBJ has its own built in stairs. The red carpet is a nice added touch.

There are certain opportunities that are better than others. I think being asked if I wanted to take a ride in a Boeing Business Jet (BBJ) as one of the better opportunities I have had in life. I didn’t care about the details. I didn’t care where we were going. I didn’t care how I was to get back home. The answer was “yes” — maybe even a “hell yes.”

Once the details rolled in, I learned I had the chance to fly from Boeing Field (BFI), just south of Seattle, to Anchorage (ANC) on the plane. It was going to continue flying to Asia for a business jet conference, but I was happy to be on the short leg. 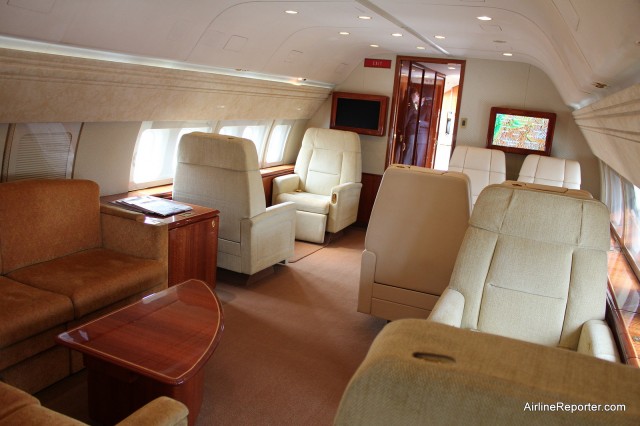 Access to aircraft like this is typically limited. Boeing delivers them “green” (nothing inside) and most owners are pretty private about these high-end transportation machines.

I didn’t want to waste this opportunity, so even though our flight was scheduled to leave at about noon, I made sure to show up a few hours early to take photos, video and just stare in awe.

The floor plan of the BBJ. Image from Boeing. CLICK FOR LARGER.

This BBJ was configured as an individual’s aircraft and not for a company. The aircraft is set up to fly 19 people in extreme comfort. This is impressive since the Boeing 737-700 for most airlines holds about 125.

In the front is a small crew rest area, galley and guest lavatory. The first main section houses a living type area, with a smaller dining table, multiple seats and two couches with a lamp. 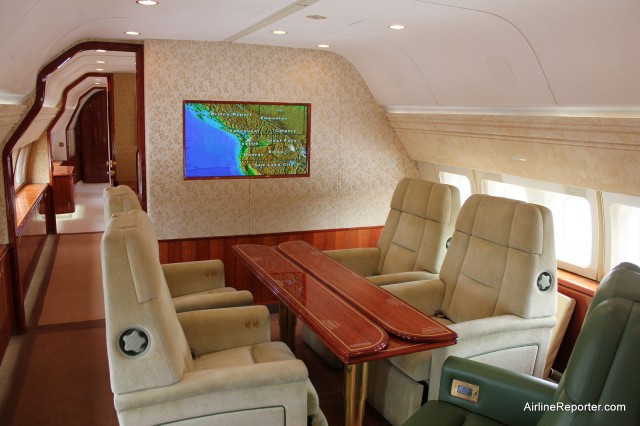 The dining area with 42″ screen on the wall.

The next section back is more of a main dining area with larger table that can seat five people. Behind the dining area is a study with desk, fax machine and a couch. The last area of the aircraft is the bedroom, which has a queen size bed and bathroom with a shower.

Typically, the Boeing 737 cabin pressurization is equal to about 8,500 feet, but like the Dreamliner, this BBJ1 has the pressurization set to 6,500, reducing jetlag. The bed, shower and all the other amenities probably helped to reduce the jetlag as well. 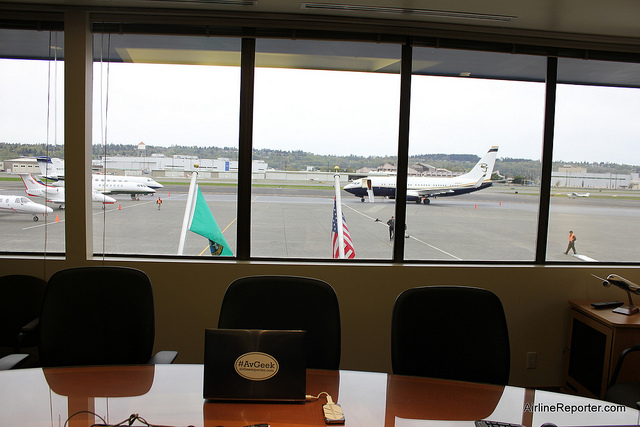 Getting some work done with a view. The other private jets just don’t look as impressive next to the BBJ.

After doing a run through of the BBJ, I hung out at the Boeing Business Jets’ office a bit before we boarded to take off. As usual, there were quite a few other private jets that came and went during my time there and I couldn’t help but notice how they seemed to be lacking compared to the BBJ — I was already getting spoiled. 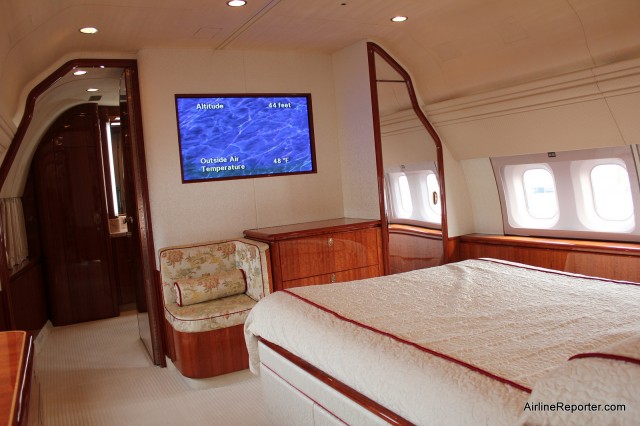 No jumping on the bed. Actually, if this is your plane, you can do whatever you darn want.

Before take off, one of my dilemmas was, “which seat do I sit in?” One of the chairs facing backwards might be fun. But also sitting on the couch could be interesting too. Luckily I was able to upgrade — to the flight deck.

Since this is not an airline, nor a scheduled flight, lucky passengers like me have the opportunity to sit in the jump seat during flight operations. I have had the privilege to be invited to the flight deck while in mid-flight a few times during a commercial flight, but never during take off or landing. Let me tell you — it took hours for that stupid grin to come off my face. 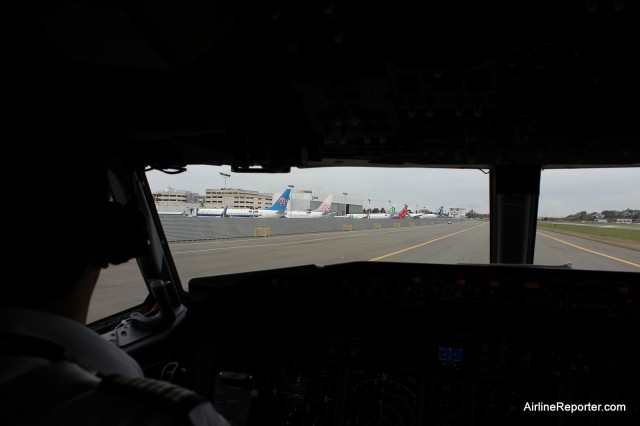 There were not too many of us making the flight, so boarding was a breeze. It took me longer to figure out the jump seat, which is kind of like a piece of wood that folds down from the wall, blocking the main door, with a little cushion on it. One has to awkwardly crunch into the flight deck while unfolding and it was a little challenge for me to get the 5-point belt on, but all totally worth it.

Shortly after I was settled, we were on the move. We took off to the south, which meant we got to taxi by the line of brand spanking new Boeing 737s before lifting off. 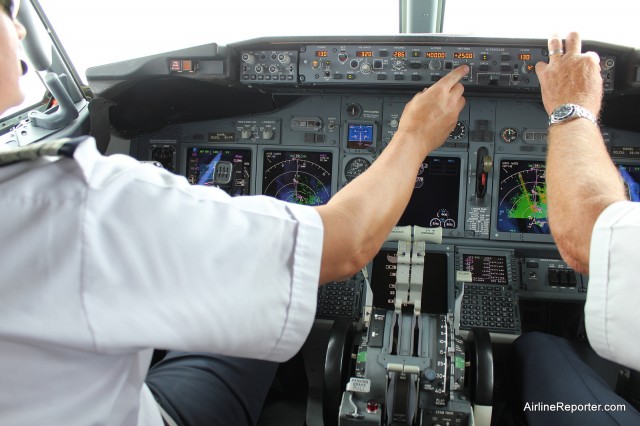 Taking care of business after taking off from Seattle.

We lined up for take off and received clearance. I am sure the take off seemed like any other 737 take off for the folks in the back, but for me, it felt like a rocket-ship. I kept going from watching the view out the front windows, to watching the pilots complete all their post take off tasks. I was once again in awe for those men and women who get to experience and complete take offs in jets like these each and every day.

Being Seattle, it got cloudy pretty quickly after lift off, making the outside views not so great. No worries, I had plenty of things to entertain me inside the flight deck. Although I could have easily stayed up front during the entire flight, I figured I should probably check out the back — you know for the story and such. 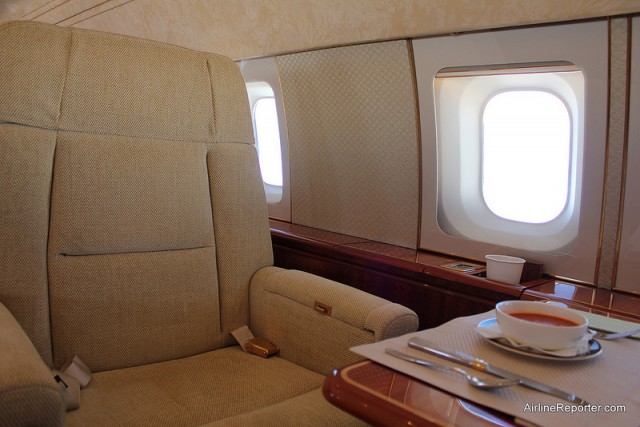 My chosen seat for lunch.

After figuring out how to get out of the jump seat (I looked graceful I tell you), I was just in time for a catered meal service. The plates, silverware and glasses were all custom for the aircraft (I am guessing chosen by the previous owners). The customization was just one of the small classy things that kept making the experience one of a kind. 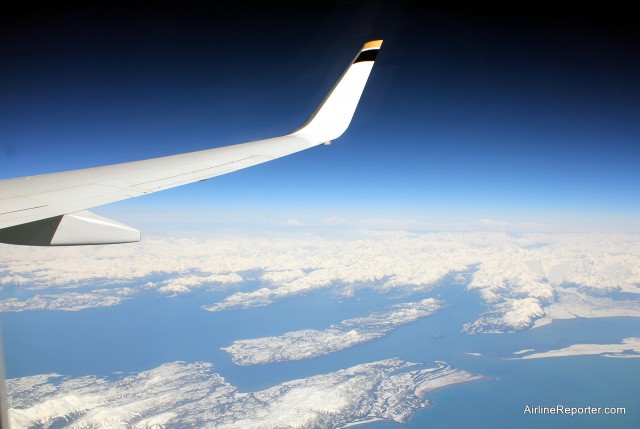 Flying over Alaska with clear weather was a real treat.

About 20 minutes before landing, it was time to head back to the front of the plane to get myself into the jump-seat (I was a pro the second time around). After getting situated, I took a look out the windows. Holy crap!

Mountains look pretty cool from the side windows, but nothing can beat seeing the beautiful Alaska landscape from the front of the plane. I was truly in awe and so were both of the pilots. 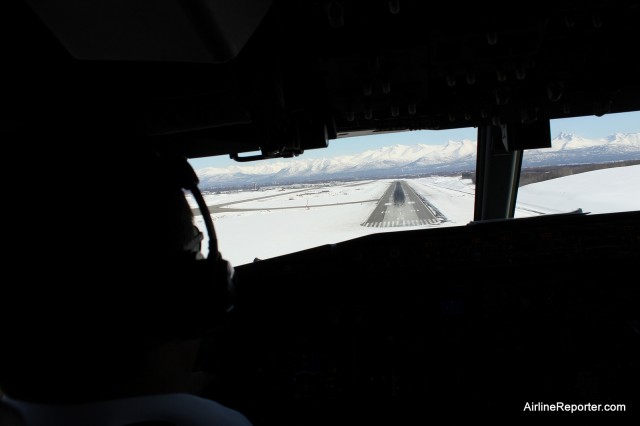 Lined up to land at ANC. What a view.

After landing, we pulled up to one of the FBO’s for the aircraft to get gas before continuing their journey to Asia. Unfortunately, I had to get off the plane and this is where my billionaire experience quickly turned back to real life.

The FBO was kind enough to give me a ride back over to the public terminal (you know, the place where people without private jets fly from). Once getting inside, I took off my suit jacket, undid my tie and even un-tucked my shirt. I was once again economy-David and ready to board my Alaska Airlines Boeing 737-800 home. 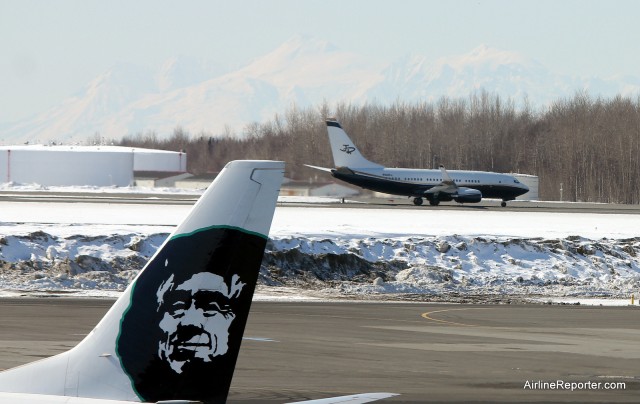 Back to reality. Time to fly an Alaska Airlines Boeing 737 back to Seattle as I watched the BBJ take off, heading to Asia.

Don’t get me wrong, I normally enjoy flying Alaska. Heck, I even had an empty middle seat next to me. But it was hard sitting in seat 27A looking forward, thinking of what the plane would look like configured as a Boeing Business Jet. I maybe forever be spoiled, but that is okay.

There are very few people in this world who have the means to own an aircraft like the BBJ. So, how much do Boeing Business Jets costs? To get the BBJ1 brand new, it will cost you about $57 million. That will only get you an empty plane, so make sure to set aside another $20-$25 million for the interior. That is the cheapest model. See the following chart for how much other Boeing Business Jets costs:

If you have to ask how much a BBJ costs, then you probably can’t afford one.

Needless to say, you probably should start saving now. The large majority of the owners of these aircraft are leaders of the world, either in government or in business. I felt very happy to be invited into that world for just a few hours. A big thanks to Boeing Business Jets for inviting me along and letting me share my experience. Now to get on one of those 747-8I BBJs…

NOTE: Out of respect for the previous owners, I have chosen not to identify them. I know many of you are pretty savvy at tracking this stuff down. If you do find this kind of information I kindly ask you not list any information in the comments. Thank you for your understanding.

AND EVEN MORE BBJ & TOP HAT PHOTOS ON FLICKR

https://www.airlinereporter.com
Ditch The Jet Bridge And Board From The Ramp With JetBlue
Change is Here: Airlines Increase Their Change Fees Again
8 Comments

I, too, was lucky enough (pre 9/11) to be able to sit in the jump seat on a commercial international flight during landing operations on a major Asian carrier. There is not enough words to describe the experience of sitting in the cockpit of an Airbus A340-300 during a NIGHT landing!! Unbeleivable
and extraordinary are the two that immediately spring to mind!! These opportunities will probably never come around again. That’s just too bad for us avgeeks…

Thanks for the fun post. I can think of worse ways to spend an afternoon and I’d bet that you had a wonderful time. I’m only guessing here, but I suspect Capt. Taylor (President of BBJ) enjoys his job. Nice pix.
(Yes, aircraft registration and ownership are easy to track. They are not relevant to your story and who cares?)

Captain Taylor is one cool guy. Don’t know if you caught my interview with him: https://www.airlinereporter.com/2013/02/interview-with-boeing-business-jets-president-steve-taylor/.

He was actually supposed to be flying the BBJ up to ANC, but his Presidential duties called him elsewhere, but we were able to get the photo together before he had to fly commercial.

I am envious of this and also your Beech Starship adventures! Thanks for the pics. Did you shoot any video?

Of course :), but coming soon. I was impressed with my own skills with taking photos, video and watching the take off / landing with my own eyes :).

Fantastic report! The closest I have had to this experience was a very small load on a DY flight b/w CPH-ARN. There might of been 19 people on board… Of course, the amenities compared to your trip were *ahem* lacking…

I’ve been lucky to charter for most of my life. Commercial is the worst. I love flying the jumpseat. I’ve had the pleasure of flying on a BBJ owned by an influential man in Las Vegas. I couldn’t believe we flew non stop LAS to MACAU. I’m normally on a Challenger 604 (nothing to stick a nose up at) but nothing in the world compares to a BBJ. First class was ruined for what seemed like forever until very recently when Emirates and Etihad started offering what I consider private jet experiences on commercial flights (for the same price.) But no matter how nice their hard product and service may be you still have to deal with all the hassles of commercial airports. Nothing beats calling the pilots, pulling up the airport, and leaving when you’re ready to go.

in such conditions, I can travel. 🙂 Looks great !!