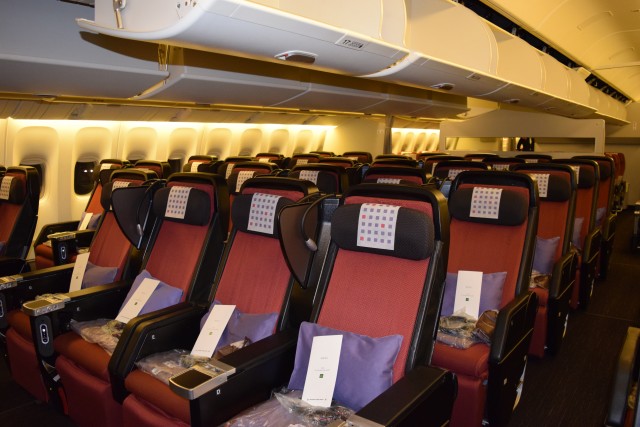 The Premium Economy cabin on JAL’s 777-300ER is configured 2-4-2, as compared to 3-3-3 in regular economy, so it’s definitely easier to get from the window seat to the aisle when you don’t have to climb over two seatmates. I also liked the wide center armrest between seats.

The seat was the type that slides forward, so there is also no chance of the passenger in front of you reclining into your space. I didn’t use the IFE, other than setting it to the flight map, but I thought that the screen was a nice size, if I had been watching a movie. I did take advantage of the in-seat power, though, charging my phone with the USB port beneath the screen. There was also a full power outlet on the seat itself, near the floor. The flight offered their SKY Wi-Fi by Panasonic, but I was too busy sleeping to give it a try. 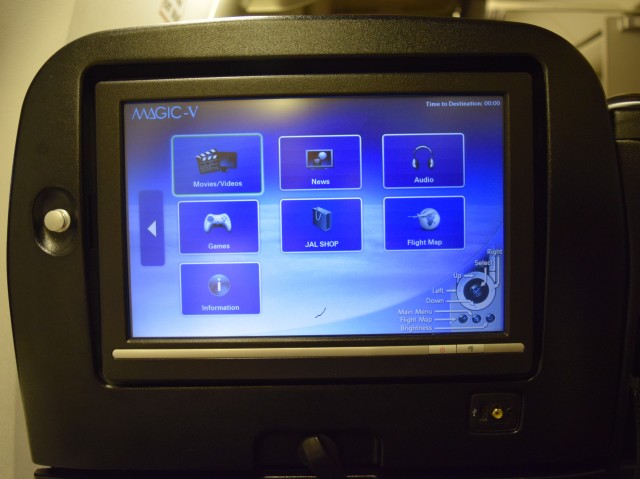 Upon boarding, each seat was already furnished with a blanket, down pillow (definitely nicer than your standard coach pillow), headphones, menu, and small amenity kit in a plastic bag. The amenity kit included a toothbrush/toothpaste, earplugs, an eye mask, a face mask, and ’œeye refresher’ (a moist towelette shaped like an eye mask). There were also a pair of slippers tucked in the seat pocket. This was the first time I’d ever worn slippers on a flight, so I thought that was a nice touch. As we were departing, the flight attendants came through the aisles and handed out small bottles of water, as well. 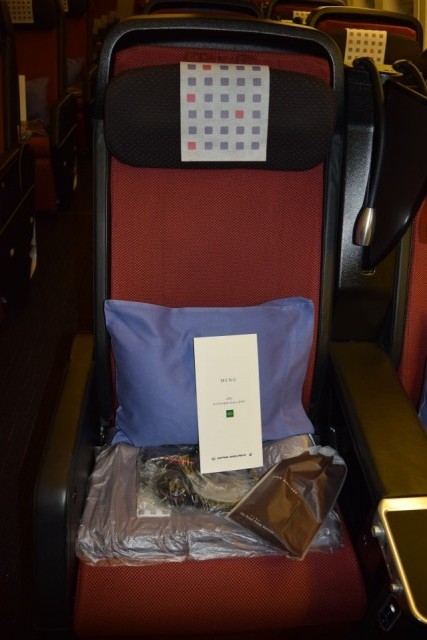 Shortly after departure, they offered a drink service along with what they termed the ’œlate night snack.’ Given that it was about 2:15 am, I certainly didn’t want much food. I was happy with a cold sandwich that I could eat quickly and I also appreciated that the drinks and snack were served together, to maximize my hours of uninterrupted sleep.

I thought the onboard service was quite good, although I didn’t interact with the flight attendants very much. During the time I was awake, I saw that they were frequently roaming the aisles offering refills on coffee or tea. They also made an announcement inviting passengers to visit the galley if they wanted snacks or anything during the flight. 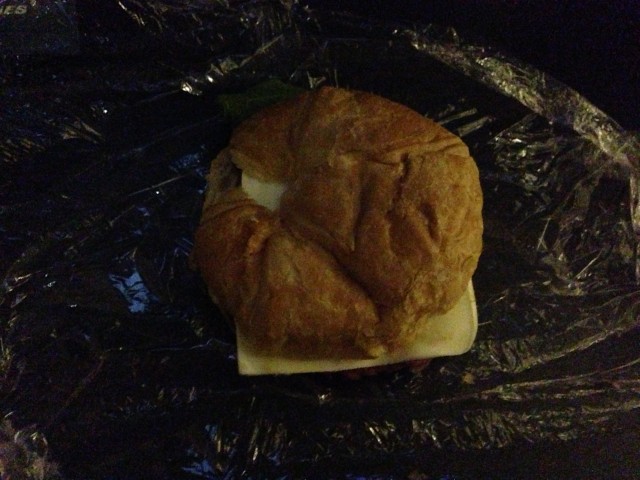 This was my late night snack. Tasted better than it looked! – Photo: Lauren Darnielle

When it came time to sleep, I was all for it! Fortunately, the flight was smooth and quiet, so I had the optimal environment. The seat was comfortable and I enjoyed the generous 42’ seat pitch. I definitely find it easier to sleep in seats that slide forward, even when the seat doesn’t go fully flat. Realistically, part of that is because I never recline a seat, even on long-haul flights. But on this flight, I put up my footrest, slid the seat all the way forward, and fell right asleep!

The cabin lights came back on about 2 ½ hours before arrival, and I got up to use the lavatory before the breakfast carts came out. 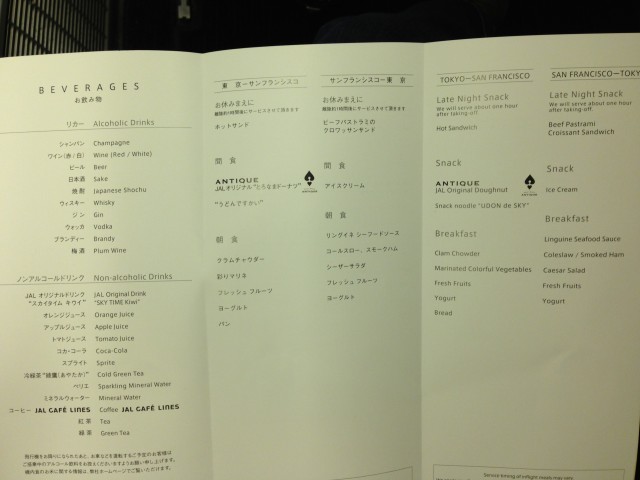 I made it back to my seat in time to catch the second hot towel service and then it was time for food. Linguine and salad seemed odd, until I got to Japan and realized that it’s not odd at all, but the flight attendant was happy to bring me an extra snack sandwich from the night before.

I ate some of the pasta, but I’m not a fan of anything with cream sauce, so that was a little disappointing. I was also expecting that there would be some sort of choice on the entre. In retrospect, I definitely should have called to order a vegetarian meal ahead of time. The other thing you can see on my tray is their special ’œSKY TIME Kiwi’ drink. That was good, and of course no one can complain about ice cream with breakfast. In terms of food, it’s also worth noting that it’s exactly the same food as regular economy; they just print it on a menu to make it look classier. 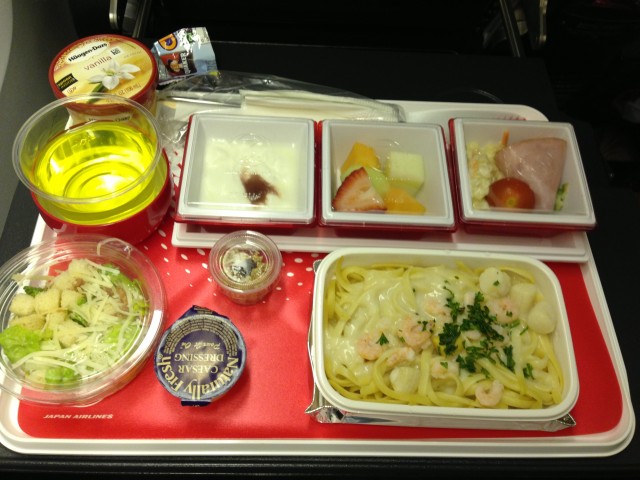 The rest of the flight was uneventful, and I watched the flight map to see us get closer and closer to Haneda. As I was waiting to deplane at the end of the flight, staring at the bulkhead wall next to me, I noticed postcards among the brochures and grabbed a few. That was another fun touch ’“ I wish I had a souvenir postcard from every airline I’ve flown with! 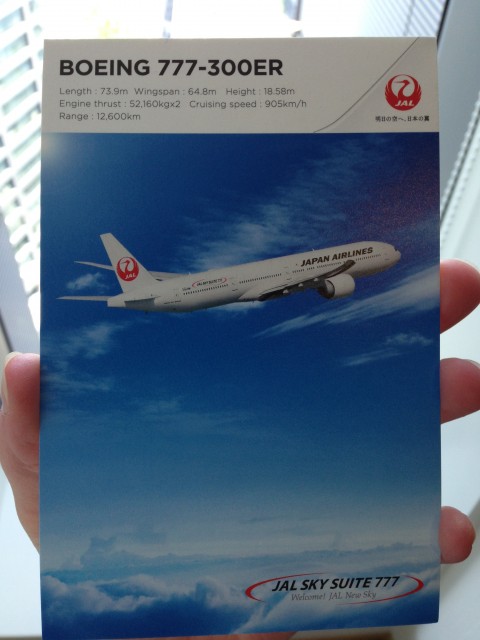 I love my postcard! Everything you need to know about the 777-300ER – Photo: Lauren Darnielle

My flight arrived a bit early, so I got into Haneda about 4:15am local time. I prefer red-eye flights whenever possible, because they make it easier for me to sleep and also allow me to maximize my sightseeing time at my destination. The combination of an early morning arrival and getting a lot of sleep in Premium Economy was really nice. It was too early to leave the airport right away, so it also gave me a lot of time to explore Haneda, which I had never visited before. I especially loved the 6am planespotting from the outdoor observation deck!

When it was time to head into Tokyo, I also benefited from Haneda’s convenient location. By public transportation, it was about 30 minutes to my hotel, versus the hour or more it would have taken from Narita. 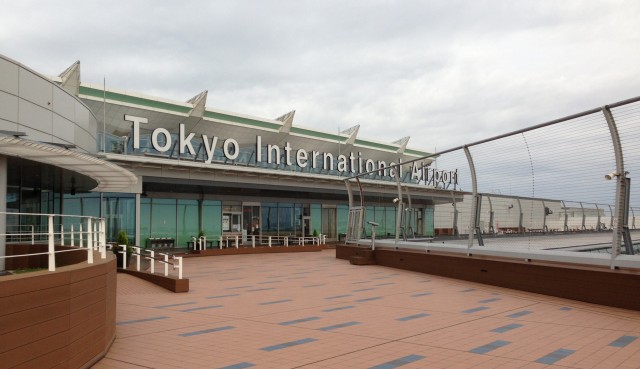 Overall, I really enjoyed my Premium Economy experience. There are definitely important distinctions from economy that make it worthwhile. I had a good experience flying economy on the way home, but I missed my slide-forward seat, slippers, down pillow, and bottled water. It’s a clear step up from economy, and I think it’s a good middle ground for those who aren’t able to fly in business class.

The only aspect of the flight that disappointed me was the food. Having previously flown on another Asian airline between Hong Kong and Narita in economy, I was expecting higher quality food and some choice of entre, particularly on a long-haul flight. Still, I would fly JAL Premium Economy again, if I ever go back to Japan!

Note: I purchased my ticket in economy, but Japan Airlines upgraded me one-way to Premium Economy to experience their product. Opinions are my own.

In reference to your comment about flying Asian airlines, I can recommend Singapore ( SQ ) to you! I flew their A380s to / from NRT from LAX. I returned home two weeks ago.

I flew in their Y Cabin. Their ” product ” was the BEST I’ve ever experienced! Even better than Emirates! They fed and watered me well! I can only imagine their service in their higher classes!

I’d love to try SQ someday! This was only my second time flying anywhere in Asia, so it doesn’t come up that often, though. (Plus, since they’re in Star Alliance, it’s probably not in the cards any time soon.)

I also flew Korean Air ( KE ), during my extended spotting mission at Narita. I did a short ” reccie ” ( reconnaissance mission ) over to ICN / Incheon, Korea. Korean Air was better than ANY US carrier! I flew in the Y Cabin. They fed me a FULL HOT MEAL on both flights. Flight Time from NRT>ICN vv is around 2 hours. As did SQ, they supplied me with GENUINE silverware! Not the CRAP plastic eating utensils – that a child would use – that are commonplace on US carriers! My only negative comment about KE is that they distributed those CRAP ear buds; as their headset!

Hi, Lauren. Another great piece, and I notice your title has changed. Welcome to the team! I’m digging the postcards as I’m still old school in sending them to friends and family on most of my travels. What a nice touch! Curious, were they available in economy on your way home?

Thanks! I’m all official now! 🙂

I didn’t pay attention to see if there were more postcards in economy. The rack with the postcards & brochures was attached to the bulkhead at the front of Premium Economy. So if you’re walking through Premium Economy at the end of the flight, anyone can just grab a postcard as they’re walking by.

During the flight, they had the curtains closed to keep Premium Economy separate, so they might not like people from economy going up there during the flight. But the cabin crew was nice, so if you asked them to bring you a postcard, I’m sure they wouldn’t say no.

Were you put in JAL economy plus as a result of booking the economy fare with AA? I am looking at the same situation and wondering if I buy an AA economy fare will be put in automatically or randomly or given any options to pay for an upgrade. I see via the AA online booking process I am unable to request upgrade on these flights via status and miles as I am on domestic flights nor select my seat online.

I am interestingly seeing that the AA fare (code shared with JAL) is several hundred dollars more than purchasing direct with JAL.

Lauren was put in economy plus based on a request from us to do a review and JAL agreed to do so. She already had an economy ticket. As far as the rest is concerned — I have to say I am not sure :(.