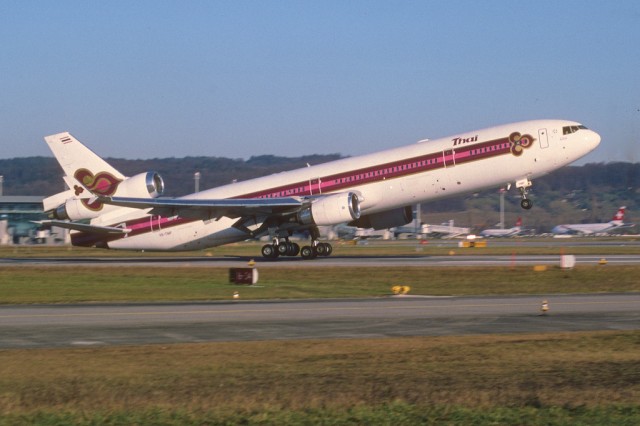 By this point, airlines were starting to question the viability and future of McDonnell Douglas as a commercial aircraft manufacturer. No new DC-10 orders were placed in 1984. The line was only active because of the U.S. Air Force order for sixty KC-10s. 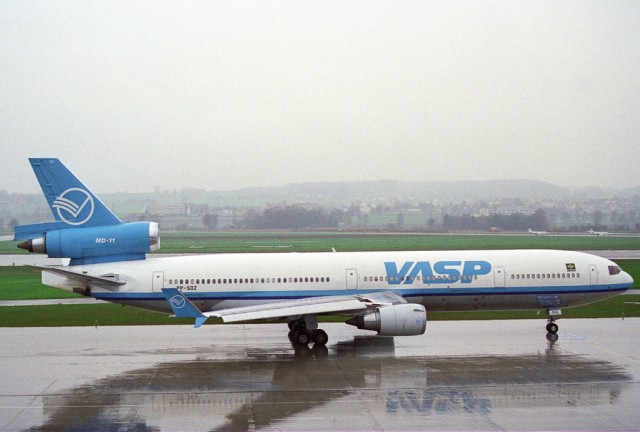 When the board granted authority to offer in July of 1985, the MD-11 was morphing into a different DC-10 configuration once more. This time it was a baseline 320-seat aircraft with a stretch of 18’7″ over the DC-10-30, with a range of 6,800nm. There was also to be a shorter MD-11ER, with a range of 7,500nm. Other proposed variants were both dedicated and combi freighters. McDonnell Douglas also dreamed of stretches.

The MD-11 was officially launched on December 30, 1986, with 52 firm orders and 40 options. Ten airlines and two lessors made up the customer base. Three customers had already backed out by the first aircraft’s assembly in 1988.

The first MD-11s were intended as freighters for FedEx, but were held onto as test articles until 1991. 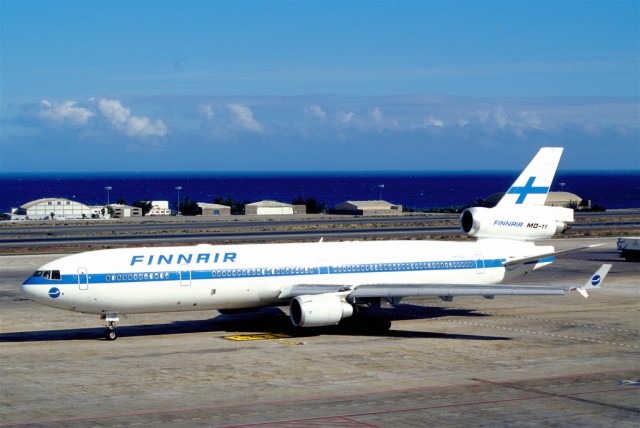 Finnair’s first MD-11 was delivered on December 7, 1990 (after a host of delays). The aircraft were originally intended for JAT Yugoslav Airways, but they were not taken up due to the raging civil war in that, now defunct, country. Delta would be the first American operator of the MD-11; also in 1990.

After entering into revenue service, it became clear that the MD-11 was not performing as it said on the box. Nowhere close, at least in airline terms. Singapore Airlines, frustrated with the payload and range shortfalls declared that they could not use the aircraft on theirÂ long-haul routes. They cancelled their twenty frame order. American Airlines was, in the words of Robert Crandall, “very unhappy.” They cited both aerodynamic problems and issues with Pratt & Whitney for the 4% higher-than-expected fuel burn. Delta was also a little cross – they were experiencing dispatch reliability issues with their first batch of aircraft. 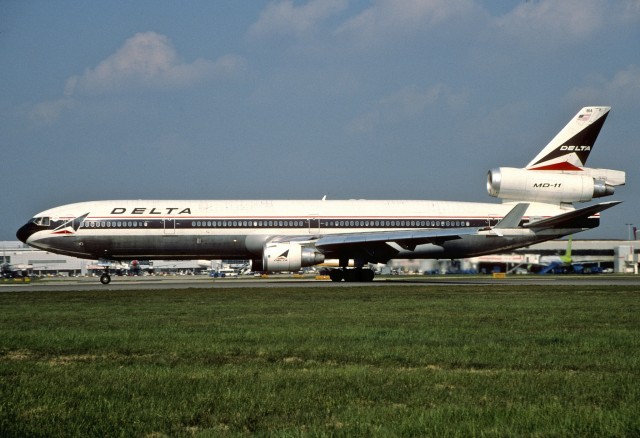 McDonnell Douglas scrambled to devise a performance improvement program with Pratt & Whitney to try and make the aircraft live up to its promises. Collaborating with NASA’s Langley Research Center, this program lasted until 1995. It worked. Unfortunately the MD-11 was already seen as an under-performer and was getting destroyed by its twin-engine competitors. Sales never recovered. 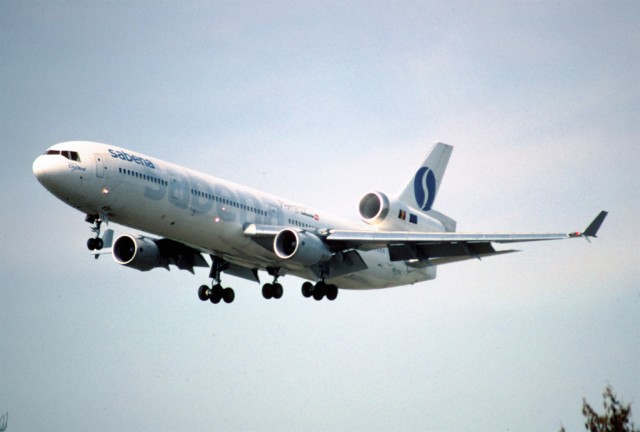 The last passenger MD-11 was delivered to Sabena in 1998. The last freighter went to Lufthansa Cargo on January 25, 2001.

The MD-11 was one of the first commercial aircraft to use computer-assisted pitch stability augmentation. It even had a fuel-ballast tank in the horizontal stabilizer. Much of this was necessary because the aircraft’s tailplane was smaller than the DC-10’s to improve fuel efficiency. This would actually come back to haunt the design, as it made the aircraft not only challenging to land, but also inhibited its crosswind performance.

Furthermore, the aircraft was designed with a center of gravity much farther aft than most airliners. The FAA also urged Boeing to update the flight control software, as the aircraft was potentially prone to violent, unintentional pitch movements and oscillation. 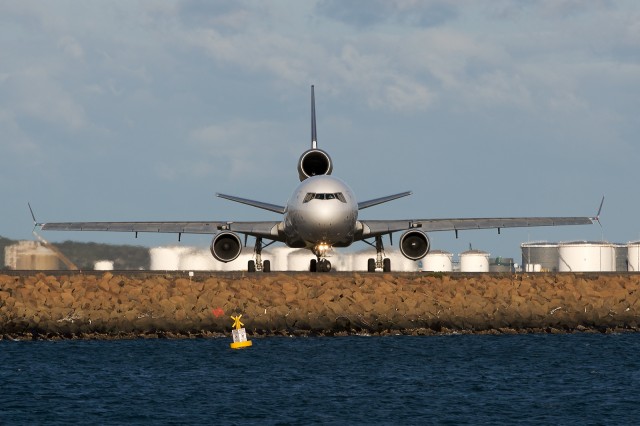 The majority of passenger MD-11s were gone by 2004. Some airlines abandoned them much faster. Korean Air made it known that they wanted to convert their MD-11s to freighters as early as the closing days of 1994. American Airlines agreed to sell their nineteen MD-11s to FedEx in 1995. In American’s case, not before leasing two of their frames to failed start-up USAfrica Airways.

Finnair’s MD-11s soldiered on in passenger service until February 22, 2010. As of today, only KLM operates a dwindling number of MD-11s. They will retire from commercial service on October 25. There will, however, be enthusiast flights to celebrate the MD-11 on November 11th. KLM is also offering prizes in an MD-11 trivia contest.

KLM, thankfully, is aware of the enthusiast love for the MD-11.

So why do we love the MD-11? It underperformed, lands like a fighter jet, and has some alarming safety issues that the NTSB still wants corrected. It seems like that would disqualify it from everyone’s list of favorites.

Oddly, that’s exactly why it’s loved. It represents an era when flying was a challenge – when skies, and liveries, were diverse. If you love the DC-10, you probably also love the MD-11. Because of, and despite, its flaws.

I will be on the last commercial MD-11 flight for KLMÂ tomorrow, so be sure to stay tuned!

https://www.airlinereporter.com
A Unique AvGeek Wedding – Inside the First 747
My Dinner with Audrey – The Last Commercial MD-11 Flight
10 Comments

I came with in 1 week of being instructed in a MD-11. The Cargo Company I was flying for was negotiating for 2 of them with Korean Air Cargo. But the deal fell through when the Board of Directors decided to go with 757’s instead.

Who or what is McAir and how did he factor into the design phase?

I always loved the MD-11. It was my favorite plane because it was just so different from everything else. Being 16, however, I never got to fly in one, and probably never will. I suppose my only chance is to become a pilot and fly for UPS or FedEx. But even that’s a long shot.

I love the picture of the VASP MD-11. My only 2 flights on an MD-11 were VASP. One flight from MIA to GRU, and the second from SSA to GRU which happened to be the domestic continuation of the VASP flight from ZRH. I have great memories of taking the bus from the terminal at SSA expecting something much smaller only to turn the corner and see the huge MD-11 waiting for us.

Great article on one of the most comfortable aircraft American has flown. I only have two issues having started my career at McDonnell Douglas RAMS and spending a good portion of it at American. First, American used the General Electric CF-6 80C2 engine. The type did not last long at AA due to the reliability and economic deficiencies noted. Second, no one I know whom ever worked at MDC ever called it “McAir.” IMHO it cheapens a once proud brand by McDonald’s-izing it. But good article that brings back great memories.