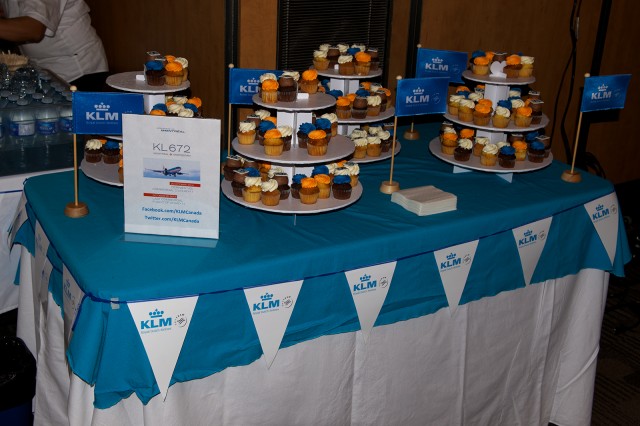 It was at this point that I realized that, while a vocal minority of the passengers were die-hard AvGeeks, the rest had no idea what was going on whatsoever. I felt bad for them. Not because they didn’t understand the great joy and deep sorrow of the end of a spectacular failure of an aircraft, but because this was a roughly six-hour night flight – and all us AvGeeks had no intention of sleeping.

To avoid jetlag, I had already decided to keep my mission profile on Redmond time (aka staying up all night), but that doesn’t apply to everyone. AvGeeks can be very excitable and forget that not everyone around them feels the same way. I was worried the other passengers were going to become insomnia-zombies, not of their own accord.

BONUS: The End of the (Passenger, Widebody) Trijet: Saying Goodbye to the MD-11

I was unable to worry for my fellow passengers long, however, as the General Manager of Air France-KLM for Canada started to give a speech on the significance of the MD-11 to both Montreal and KLM.

KLM has been serving Montreal for 65 years. and will continue to do so from today on with the A330-300.

Shortly after that, the flight crew was ushered onto the ramp for a photo with the aircraft. A very classy move on KLM’s part. I only wish I didn’t have to shoot it through the double-glazing! 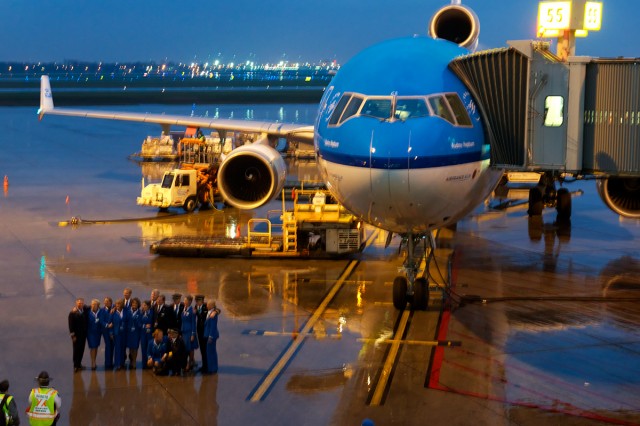 The crew of KLM672 posing for a photo in front of PH-KCE – Photo: Bernie Leighton | AirlineReporter

As boarding time drew nearer, I began to worry that this was the end of the celebration and the flight would be routine. 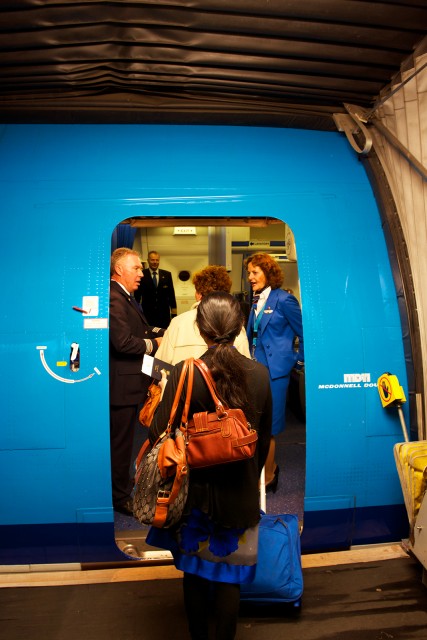 I was, thankfully, mistaken! As I boarded and took my obligatory cabin shots, one of the cabin attendants told me something to the effect of “you should take more photos, it’s not like you will ever get to fly on an MD-11 again!” So I did. I photographed the extremely spacious galley, the lavatories, the ingenious water spigots and associated cups, and finally a celebratory cake for the crew. 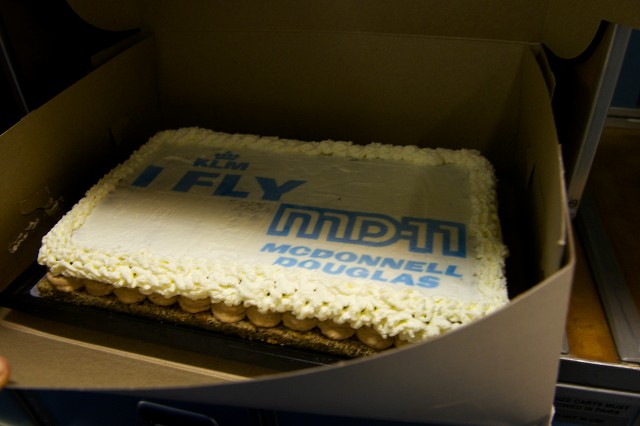 Even the overhead bins are completely different than any other widebody aircraft in service. 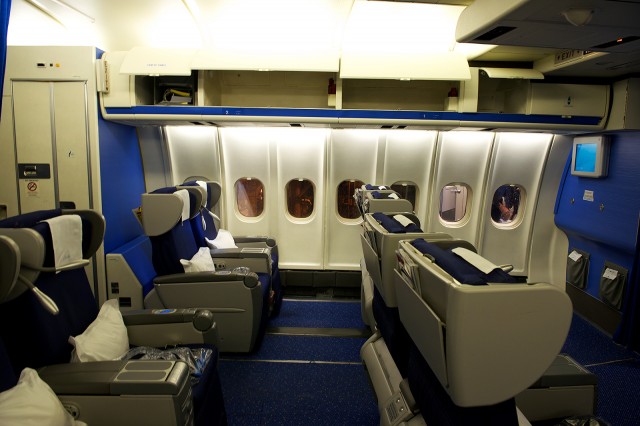 That’s the thing, the MD-11 offered a completely different passenger experience than any other aircraft in its class. It feels extremely open and spacious, despite the fact it is the same width as a DC-10. Even in business class, there is space between the cabin wall and the seats. The aisles are much wider than we’ve been conditioned to expect, and the ceilings feel higher. Even the overhead Passenger Service Units are unique. There are no gasper vents, no overhead reading lamps (at least in business) – it’s a perfectly flat surface.

We pushed back to scores of ground staff and other airport employees wielding their cameras and waving at us furiously.

Engine start-up was a sad event. Not only was it the last time those three GE CF6-80C2D1F would ever be started in commercial service, but because I could barely hear them. While the DC-10-30 has an amazing growl and rumble to it, the MD-11 is nothing but a low hum. Seriously, it makes an A330-300 with the latest Trent 772C-60s sound like an MI-2!

I was expecting to be deafened by something other than silence. Combine that with the giant windows and it felt like I was on a plastic fantastic. It’s clear that McAir, despite neglecting its commercial division to a depressing degree, was able to spend an extensive amount of design resources on passenger experience. Also, even though Audrey was 20 years old, KLM’s maintenance department kept her looking fresh off the line.

Yes the business class seat was generations behind, but for a five-and-a-half-hour flight you don’t need much more. It still offered 160 or more degrees of recline. Other amazing airlines like Cathay Pacific use a similar product on their “regional” flights that are up to similar lengths.

Taxi was sad, mostly because the crew made a great point that this was the last time anyone would be seeing the safety video.

Upon our arrival at the runway, the pilots stood on the brakes and revved the engines. Even at close to 100% N1, the engines sounded like nothing more than a gentle whining. Thankfully, takeoff itself was thrilling. Over the course of our 31.65 second takeoff roll, I could only really hear the wind rushing past the aircraft. Liftoff was awesome. The angle of attack we adopted was much more akin to a rocket-powered-sled than a commercial airliner. Nothing shallow there. It was hilarious to watch the passenger information screen on the three informational LCDs being outpaced by our ascent.

It was at that time that I discovered what a stable platform the MD-11 is. There were relatively heavy showers in the area as well as a deeply entrenched storm system closer to the Atlantic Ocean. Didn’t feel a thing.

Once the seatbelt sign was switched off, I got up to speak with other MD-11 enthusiasts on the flight, including some serious heavyweights from Boeing Commercial Aircraft and KLM.

During that time, there was a surprise service. 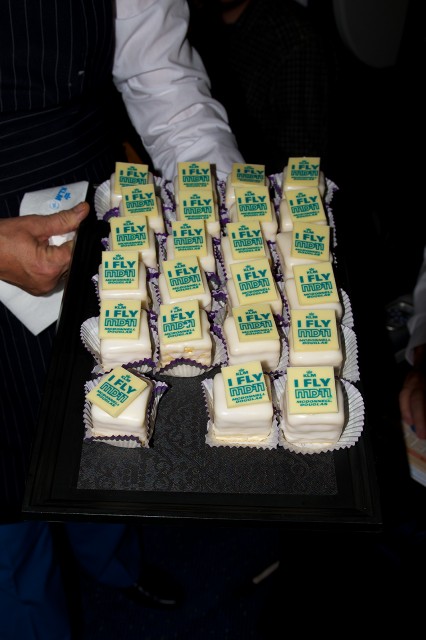 The MD-11 cakes were delicious.

Soon after, it was time for dinner, which meant I had to leave my exciting conversation behind and return to my seat. 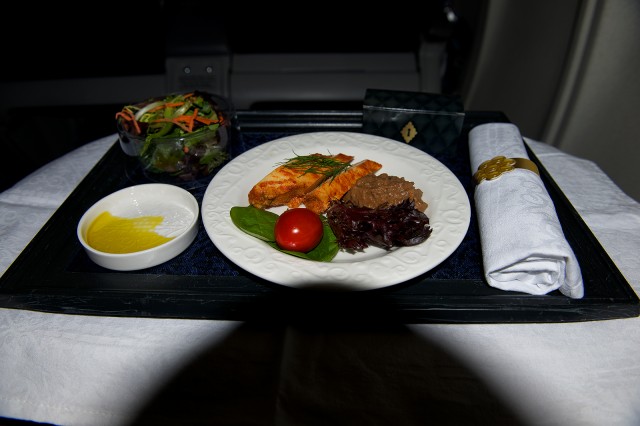 To be completely honest, I wasn’t flying this flight for the catering. I’ve also been having a run of bad luck when it comes to airline catering across the Atlantic — I wasn’t expecting much. I was pleasantly surprised by my Caribbean chicken salad. Hats off to KLM’s menu planning and catering subcontractors! 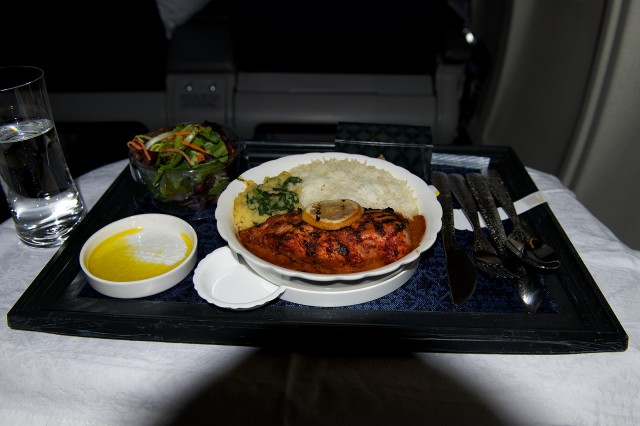 My only complaint about the tandoori chicken was that they used a skinless chicken breast. Because of this, somewhere within the cooking or reheating process it got a little dry. Still tasted good.

After dinner, sane people went to sleep. None of the AvGeeks did. 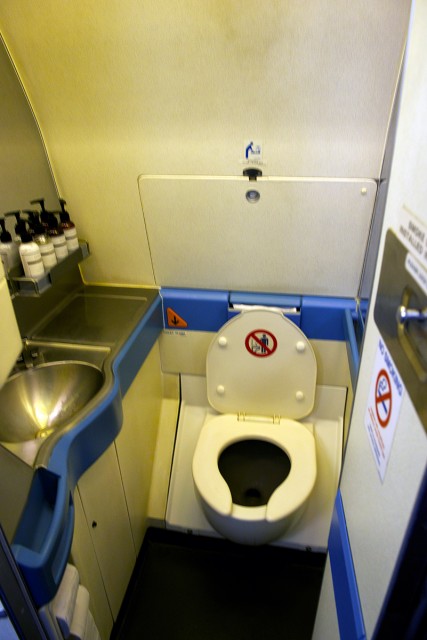 I took the time to talk to the other AvGeeks and reflect on the little differences between the MD-11 and every other aircraft out there. Take the lavs, for instance; most business class lavatories are narrower, but gussied up to look like they belong in a medium quality five-star hotel. Not true on the MD-11 – purely utilitarian. There’s something to be said about that.

In what felt like seconds after dinner, we were already one hour out from Amsterdam. It was time for breakfast. 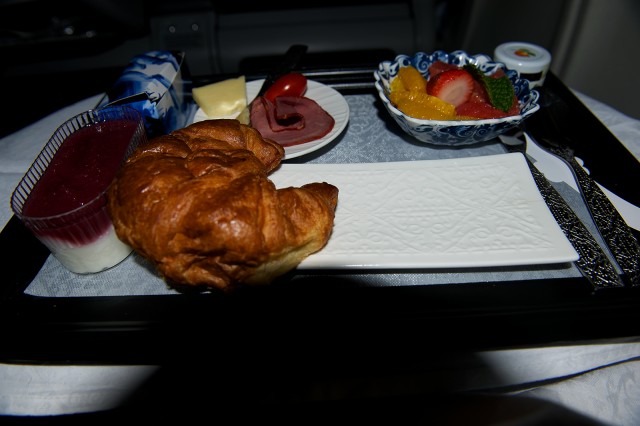 I hear you can get a good Breakfast at Tiffany’s, but only before 10:00am! Photo: Bernie Leighton | AirlineReporter

Considering dinner service had completed only about three hours prior, breakfast was quite substantial. Not pictured was the vegetable frittata.

Soon after that, we commenced our descent. There were a few bumps, but the airframe handled them graciously. Nothing that would annoy me or concern me about anything being spilled. KLM also took the time to present every passenger with a certificate proving that they were on the last MD-11 commercial flight. Passengers in business class were also presented with a lovely model of PH-KCE.

Upon landing at the extreme edge of EHAM (Runway 18R) we were met by a V-formation of escort vehicles to lead us to gate D2. Unfortunately, they were ahead of the aircraft- and we could not see them. Not the point, I admit- but it would have been nice! 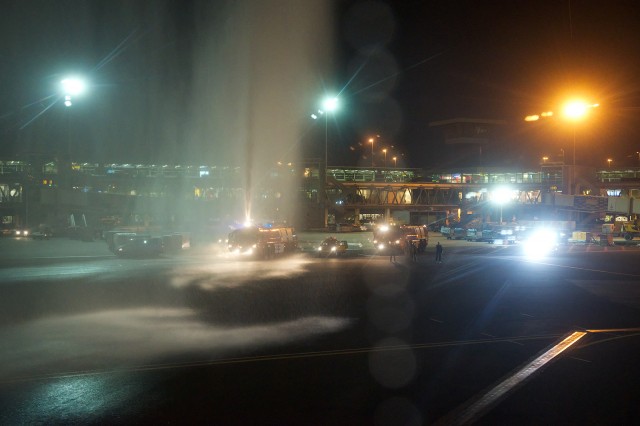 We were also given another water cannon salute on our arrival into the gate.

PH-KCE only accumulated a tiny amount of hours for a retiring commercial airliner – 86,000. All of them, I am sure, were amazing. 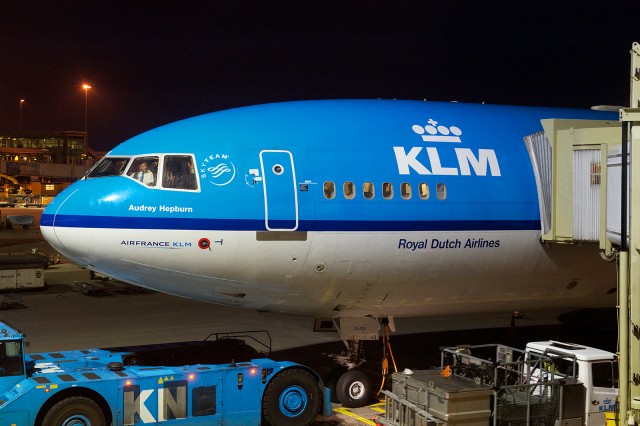 On November 11, 2014, KLM will be operating a series of MD-11 enthusiast flights around the Netherlands, but I hear they sold out really quickly.

http://www.airlinereporter.com
The End of the (Passenger, Widebody) Trijet: Saying Goodbye to the MD-11
Gone Gliding – Part One
6 Comments

Thanks for sharing and nicely written article. I flew on Audrey in the late 90’s – totally love the MD-11’s. Sad to see them go!

Why did you have the toilet flanked by the dishes of your meal?

Tells a story of what happens to the food?

Thanks for the chronicle. I was living in Dayton and St Louis during the 1990s with offices near Wright Patterson and across the runway from MD in St Louis respectively. From my interaction with USAF Flight Dynamics, MD, GE Engines and TWA I knew the MD company and aircraft quite well, both military and commercial. TWA was one of my accounts in St Louis and I flew quite frequently on MD aircraft and sold and supported many airframe subsystems. Great company and aircraft and great contributor to aerospace and our country.

Thanks for the nice article. I am searching all over the internet for people who have been on the last flight of the md-11 or took pictures of it going and landing. I’m from Holland, but live in Greece, so unfortunately I couldn’t be there myself at Schiphol to take photo’s of it’s last flight. I’m not a planespotter or into planes like you are, but my dad used to fly 25 years for KLM and many years he flew the md-11. He died 3 years ago, suddenly, only 60 years old. Somehow I feel love for this type of plane because of my dad. I’m sure he would have been at Schiphol to see it once again (he was retired). It breaks my heart to know they won’t fly anymore.

It also breaks my heart to know MD-11s are now out of passenger service, though they will live on as freighters, and very good ones, too. I’m glad you loved the airplane because those of us who gave it life at McDonnell Douglas loved it too. I was on the last test flight of the MD-11 which went around the world in three flights—22,000 miles in all—in simulated airline operations in late October 1990 just prior to FAA certification for delivery to airlines. The trip took three days and all flights were equivalent to full passengers and bags even though there were only about 40 of us on each leg. The rest was added fuel or spare parts for ballast. The flights were Dallas to Seoul, Seoul to London and London to Yuma, Arizona via the North Pole. All were longer than any tri-jet routes then being flown in service. The airplane performed flawlessly. We all thought it was a good omen for the type and the company.