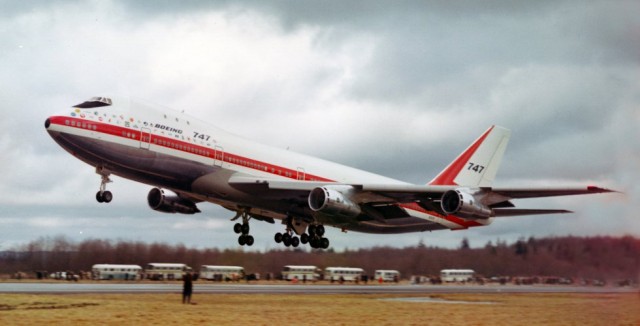 Thanks to a great relationship with the Museum of Flight through AirlineReporter’s Aviation Geek Fest work and other things, they were all for it. We now had our venue locked in! Time to work out how to do it! Both Heidi and I spent time with the museum staff working out what, how, and when we could do things. We had to move quickly though; part of the plan was that we would get married on 747 day at the Museum, when some of the heavyweights in the 747 program would be there to celebrate the refurbishment. To be the first people married in that plane (and from what we could tell, the first people married onboard any 747) and to possibly have the designer of the plane in attendance, it was too much. I was as giddy as a schoolgirl!

Things had to be kept quiet though; we didn’t want things to get over the top as we were not only space-limited but time-limited as well. So that we could have a great, calm, peaceful ceremony, we had to do it after hours. That meant keeping things quiet so we didn’t have everyone wanting to be there. It also kept the situation exciting for us. We each told some friends along with the people attending. Of those who were told, especially the AvGeeks, there were a lot of dropped jaws, stunned expressions, and the usual “she let you do that?” comment. 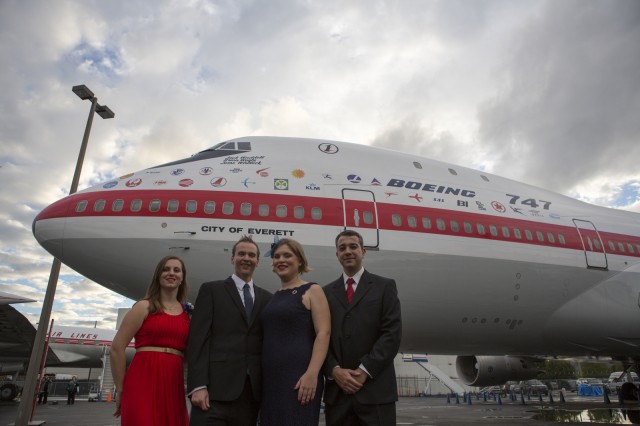 The wedding party posing next to RA001. From L to R are Sylvia, Heidi’s Maid of Honor, Myself, my wife Heidi, & my Best Man Daniel – Photo: Jennifer Nagle

As the day quickly approached, media had been notified, dresses were arranged, stress was abundant (we had three weeks to plan a wedding!) and the excitement was palatable. We had mementos made that were reminiscent of the day, and Heidi even chose a dress that seemed in theme with the history of the plane (described as “60’s flight attendant gets an upgrade”).

Funnily enough, the morning of our wedding, it poured rain in Seattle. I was too stressed trying to transport a hand-made (by me) three-tiered wedding cake to even think about what was happening that day. Everyone was asking me how I felt, it didn’t hit me until later what was happening.

I got to meet Joe Sutter, the designer of the 747, along with Brien Wygle who was chief pilot & the Captain on the first flight. Their faces, when they were told I was the man getting married that afternoon in their plane, were priceless. It wasn’t until this moment that it hit me – I was getting married, in a plane.  My excitement was over the top!

BONUS: The Legendary Men Behind the Historic Boeing 747 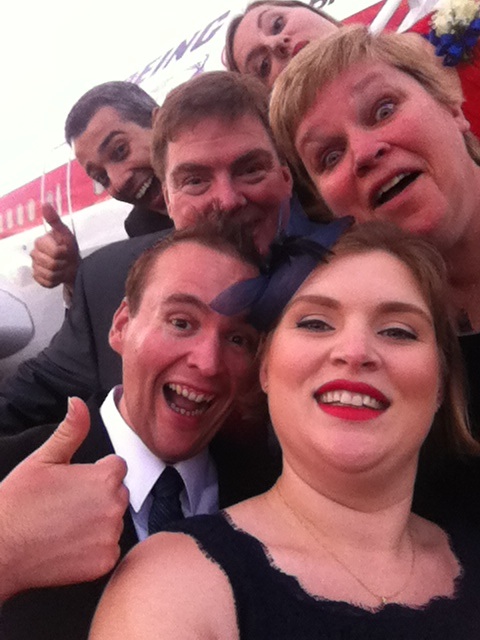 What is a wedding without a selfie? Our wedding party selfie on the steps of the first 747          Photo: Jodi Reimer

The moment I saw my wife in her dress I was stunned; it is, I am sure, the same feeling any man gets when he sees his partner like that. We had met up before the ceremony to do our photos before the light got too low. It was at this time we ran into a friend who was working for USA Today.

He was advised of the event, but didn’t have any details; telling him that he was to shoot the wedding of someone he knows inside a plane brought a funny look. Some of the photos were priceless. Plenty of goofy shots and of course the family/friends shots you would expect. 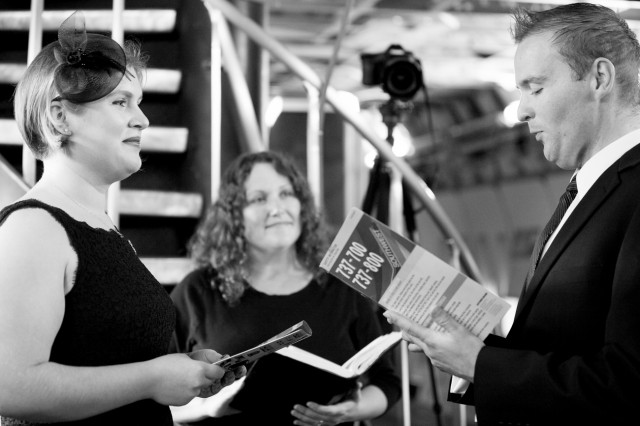 Saying our vows from safety cards.. it had to be done – Photo: Jeremy Dwyer-Lindgren | JDLMultimedia.com

When it came time for the ceremony, we all met up in the nose of the plane. I huddled nervously, shuffling my feet, while I waited for my wife to be escorted up the steps to walk in door 1R.  The ceremony went off without a hitch; we read our vows from safety cards, for an extra little bit of an AvGeek touch (no safety demonstration was given, sorry) and once it was all said and done, we signed on the dotted line right above the original concept model of the 747 (when it was meant to be a single-aisle, double-decker aircraft). 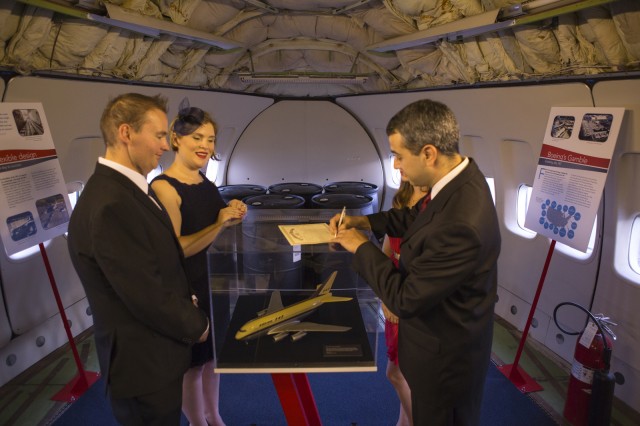 Daniel, my Best Man, signs our Marriage Certificate on top of a display of an original 747 design – Photo: Jennifer Nagle

Our day was amazing and our life together has just begun, but as an AvGeek I can’t believe what we did – what we were allowed to do. We have many people to thank, especially those at the Museum of Flight. Without their support, we could never have had this dream wedding. Thank you everyone!

Although not everyone might be able to set up a wedding quite this unique, the Museum of Flight is always up to chat with folks about creating unique wedding opportunities.

https://www.airlinereporter.com
The Legendary Men Behind the Historic Boeing 747
The End of the (Passenger, Widebody) Trijet: Saying Goodbye to the MD-11
8 Comments

Congratulations and best wishes to you two! How exciting to be married in such a unique location..and how gracious of Boeing to be so accommodating!

Thanks Joe. It was very gracious of the Museum of Flight to let us use the aircraft. We wouldn’t of been able to do it without them!

Awesome news Malcolm! This is clearly a new beginning in so many ways… happy you got to make herstory & history for yourself, your bride and for avgeek-dom.

Congratulations on both the wedding, and on getting married in one of the coolest spots ever!

Malcolm,
Congratulations to you and Heidi! Only you could have pulled off a wedding on the original 747! All the best to you!

seems like just yesterday that we were all at school having fun and being goofy. well friend I am so happy for you both and may you have many more exciting and fun times with Heidi. congrats.xxoooxxoo