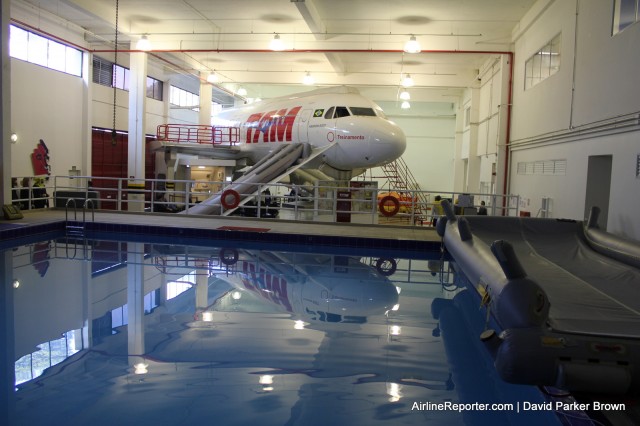 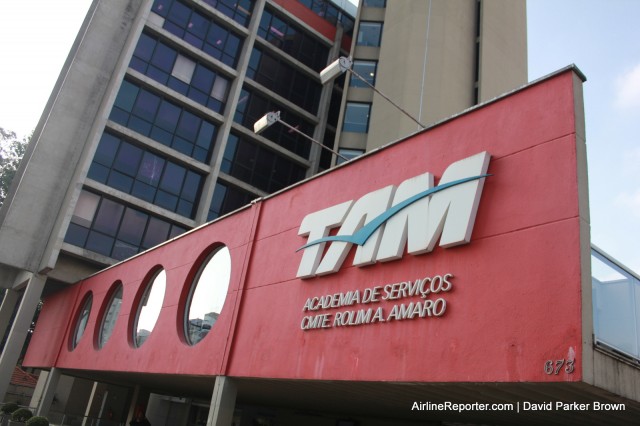 Everytime I go to one of these facilities, I am reminded how flight attendants have complex  jobs. Many see them as glorified waiters and waitresses, but they are anything but. 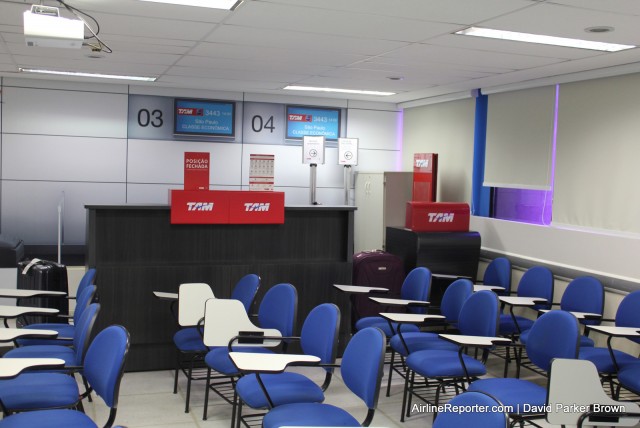 The ticket counter and gate agent training for TAM Airlines

Upon arriving at TAM’s flight training facility, located in Sao Paulo, we first viewed the classroom where new crew are trained how to work the ticket counter and gate. 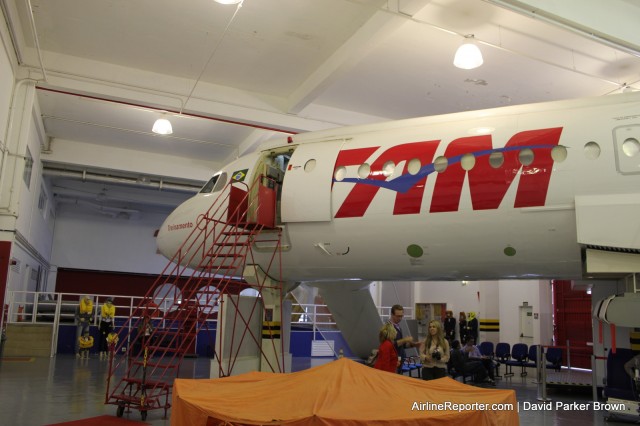 This Fokker 100 is used as TAM’s trainer

Next, we were shown the main training room, with lots of AvGeek eye candy. The first thing to notice is the large swimming pool with a Fokker 100 looming above. Back in the day, TAM ran a fleet of 53 of the aircraft type, until retiring them in 2008. The one used as the trainer has an interesting history.

Back in 2002, the TAM Fokker 100 operating as flight 3804 made a forced landing into a field northwest of Sao Paulo. Luckily, none of the passengers or crew were too seriously injured, but there was one fatality on the ground — a cow.

Although a little broken up, the aircraft was salvageable to be used as TAM’s trainer. 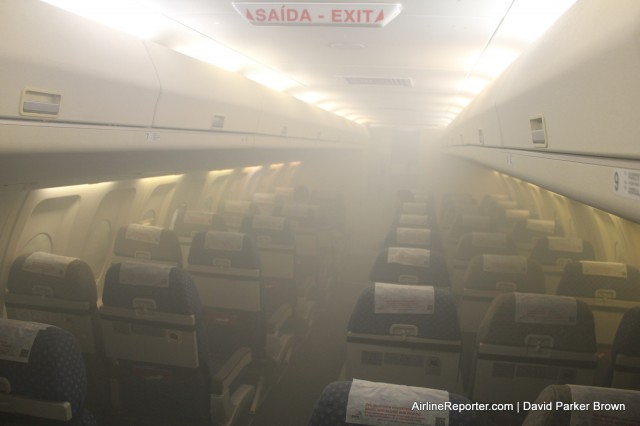 Smoking or non-smoking section; TAM’s trainer is able to pump fake smoke into the trainer

The trainer is mostly used to teach flight attendants how to handle fire and emergency evacuation procedures.

There are parts of the cabin that can simulate a fire in a lavatory or an overhead bin. The cabin is also able to be filled with smoke. Although fake, seeing an airline cabin fill with smoke is a surreal experience. I couldn’t imagine actually being in that situation.

BONUS: See a a full ditch training video with AirTran 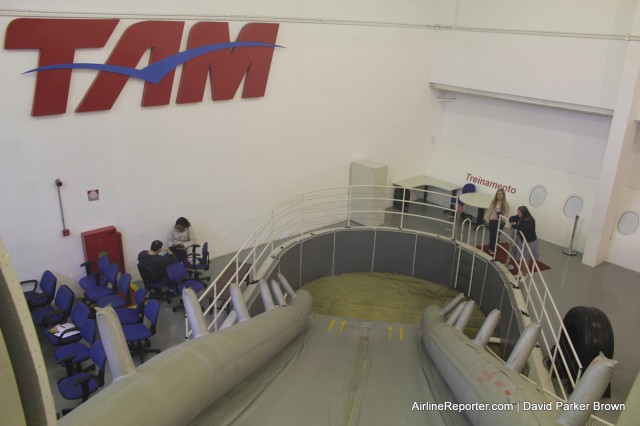 About to jump down the emergency slide

With all my visits to other training facilities, I have never been allowed to go down a slide. Oh, I have asked, but for one reason or another, I have been politely told no. Not with TAM — let’s do this!

Not going to lie — I was a bit nervous. Proper procedure is to jump from standing, but I had my phone taking a video and sat first then slid on down to safety. It was quite the trip! 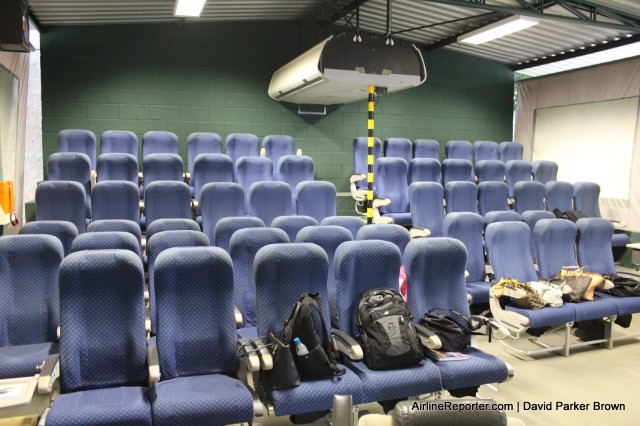 Check out that classroom seating

Next we headed outside to some fire and jungle training. Their outdoor classroom was interesting, with airline seats set up in a 12-abreast configuration. 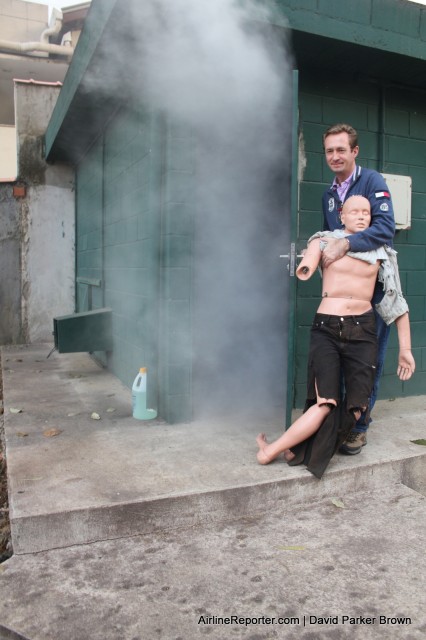 This is Truman, who is TAM’s safety guy, and the dummy named Serverin.

Part of the outdoor training is a green, cinder-block building that was probably the most difficult thing we did. Inside is a maze. Somewhere in that maze is a passenger (played by a dummy named Serverin). The challenge is that the whole building is filled with smoke and is totally dark. Teams of flight attendants must go in and communicate with each other to try and work through the maze, find the passenger, and get him to safety.

It was not easy. At all. Four of us went in, and I was in the back of the group. It was hard to navigate the dark and smoke and it took us a while to find some seats. But I was feeling all over the seats and I couldn’t find our passenger. Finally one of us did (not sure who) and then we had to pick him up (he was not light) and make our way back outside. We finally made it out, but our timing was too slow and likely Serverin would not have made it — poor guy. 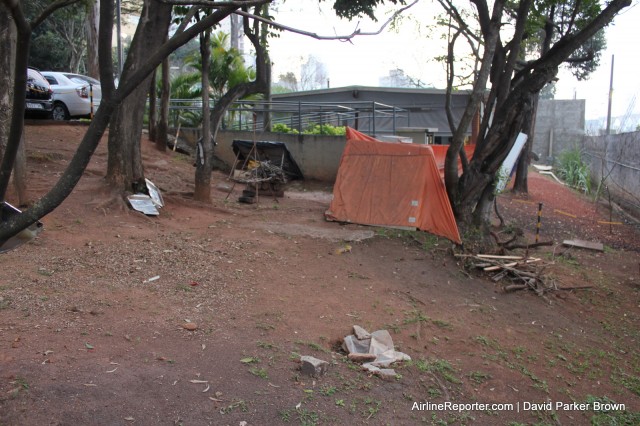 The jungle survival training area for TAM Airlines. Might look like some sort of fun camping trip, but it is not!

Then we headed over to the jungle survival training. That’s right, TAM has a specialized training in how to survive in the jungle in case a plane goes down. The biggest threat? Insects. 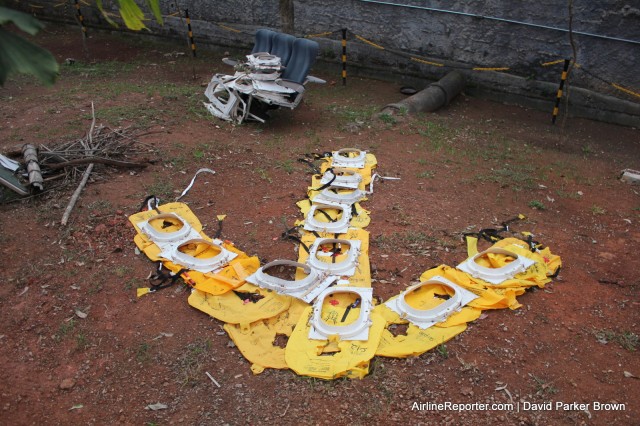 It is actually required by the Brazilian government that any airline based in Brazil needs to offer this sort of training. I have never seen this sort of training with any other airline, so it was quite interesting. The area is used to train flight attendants how to gather bits and parts of the crashed plane to build shelter and, hopefully, be rescued in a timely manner. 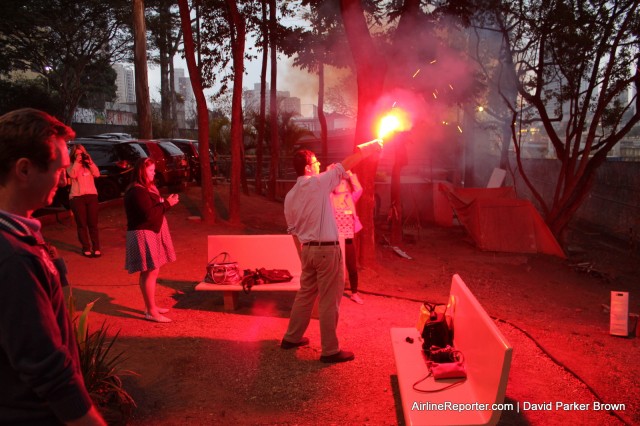 The last thing we got to do, as it was getting dark, was to try out some emergency flares. The odd thing is that when I started my night flare there was a helicopter that was flying above quite low. I was afraid that the helicopter would think that we were in distress and report it or try to help. I am not sure if it is a good or a bad thing, but the helicopter kept on its journey. 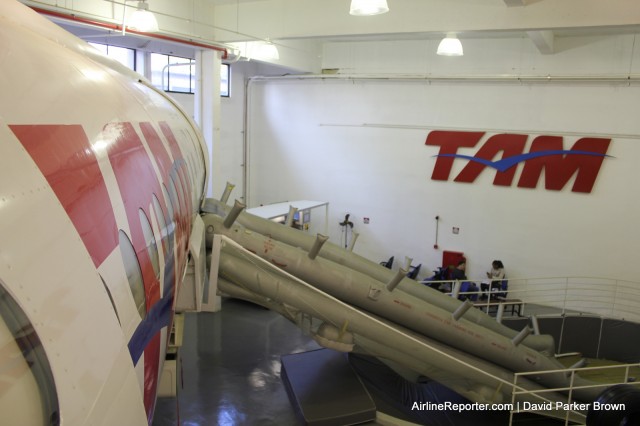 The emergency slide on the Fokker 100 — yes, I did get to slide down it!

Getting to be a TAM flight attendant and go through the training is not an easy task.  First, new employees must take classes at an external school for four months, pass a test, earn their license, then apply for a job with TAM. It is a rigorous process, but this assures that TAM ends up with some of the best and well-trained flight attendants.

Take a look at quite a few more photos of the TAM flight training facility on our Flickr.

Disclaimer: TAM paid for my flights and my accommodations. All opinions are my own.

its great to see the training these f/a’s go through.i am a big fan of f/as since they also are the ones who directly serve the customers and can make your flight a good experience.enough that you want to fly the airline again.i am grateful for the job they do.

Considering the terrible 2014 year for Airlines, this is really reassuring. Flight attendants do so much for an airline- they become the interactive human side that people are more likely to remember. That TAM would go to this level of training is amazing to hear and I would feel comfortable flying with them.

This is an amazing and insightful training programme. The Survival part in the ‘jungle’ is remarkable. I would love to do that (& all of it!).