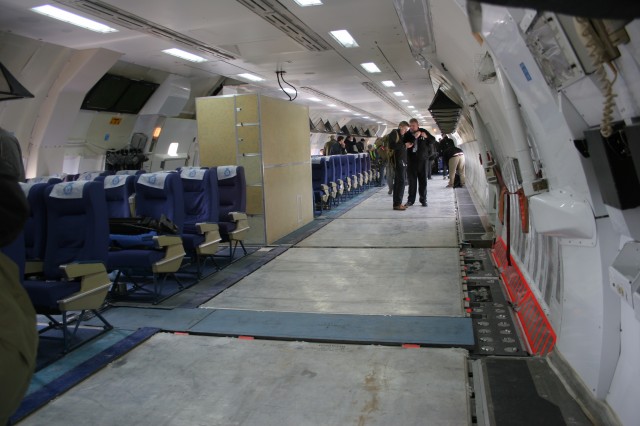 At 8 a.m., right on time, RAF Brize Norton’s Deputy Public Affairs Officer, Flight Lieutenant Rachel McCulloch, arrived and started to tick off the 40 or so names of the media who had been selected to accompany the last air-to-air refueling sortie by an RAF Lockheed Tristar, and a slightly larger number of enthusiasts who would be aboard the actual tanker.

We all board the military bus, pass through the main gate, and disembark outside the main trooping terminal known as Halfway House. It’s a big improvement since my last visit: 12 January 1974, when I flew to RAF Akrotiri on Cyprus in a 99 Squadron Bristol Britannia! 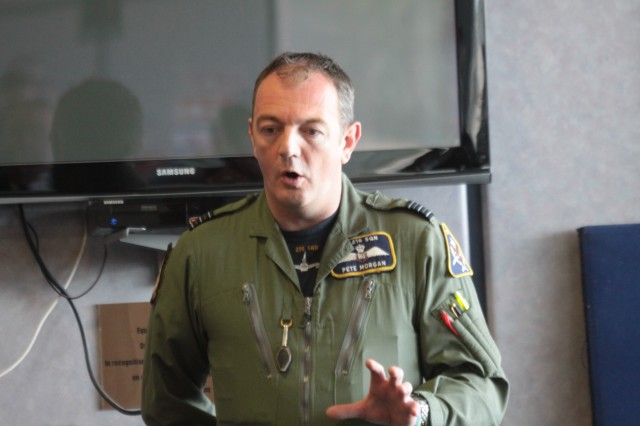 The media were told to check-in with the Air Movements Squadron personnel manning the desks, which took only a few seconds and then it was on to the security checkpoint to go into the Departure Lounge: just like any civilian airport this involved removing shoes, trouser belts, everything in pockets, jackets, computers etc. The enthusiasts remained for the moment in the check-in area.

At 9 a.m., groups of three journalists at a time were given brief private interviews with the Commanding Officer of No 216 Squadron, Wing Commander Pete Morgan. After this, we were joined by the enthusiasts, and the ’˜Wingco’ who gave a presentation on the Squadron which was formed in France in 1918 ’“ 96 years ago! 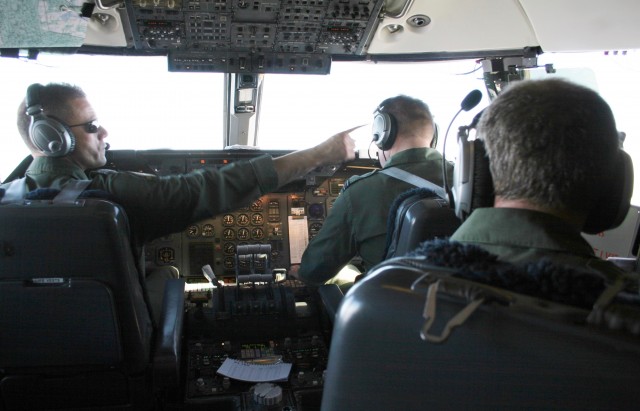 In the flight deck of the L1011 – Photo: Graham Dinsdale

During its service, the Tristar, fondly known as ’˜Timmy’ in the RAF, was the backbone of strategic air transport and air-to-air refueling, and participated in nearly every British military conflict since it entered service. The fleet of nine ex-civilian aircraft were acquired as a direct result of the Falklands war and the need to provide support to British forces in the South Atlantic, and to enlarge the air-to-air refueling fleet.

Tristars have also provided air-to-air refueling for fast jet aircraft operating over Afghanistan and Libya, and provided a vital air-bridge transporting troops and cargo to Iraq and Afghanistan. During the Iraq war, two aircraft were painted pink and were known as ’œPinky’ and ’œPerky’, after two pigs in a popular children’s cartoon series. 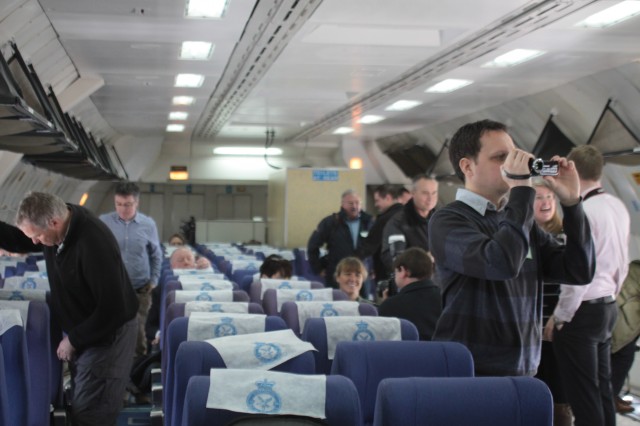 A shot of the cabin, with everyone free to wander around as they wish, including to the cockpit. Waiting for our first fighter to take on fuel.  Photo: Graham Dinsdale

Over eight years, No 216 Squadron has flown to Afghanistan 1,642 times, carrying 250,000 passengers each way and travelling a total distance equivalent to flying around the world 640 times.

Boarding the transfer coach we drove the few hundred yards to the pan where our Tristar awaits. At 10:35 we took our seats on ZD950. Half the length of the starboard side of the cabin contains the usual airline-type seats, with the whole of the port side used as the cargo deck when carrying pallets which are loaded through the large, forward upward-hinging cargo door. 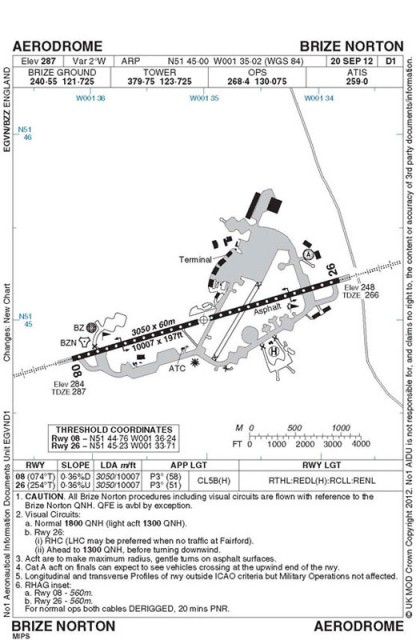 Map of RAZ Brize Norton, where we took off

With the usual pre-departure safety briefing completed, at 10:45 the first of the three mighty Rolls Royce RB211 engines started up, and at 10:50 we pushed back. At 11:01 we started our long taxi via the eastern and southern taxiways, to the (west) end of Runway 08. At the same time, backtracking along the runway was ZD948, on our starboard side, before he turned and tucked in behind us at the threshold.

We departed first at 11:12; after a 26-second ground roll, the lightly loaded aircraft rotated and we quickly climbed and commenced a left-hand turn onto a northern heading. 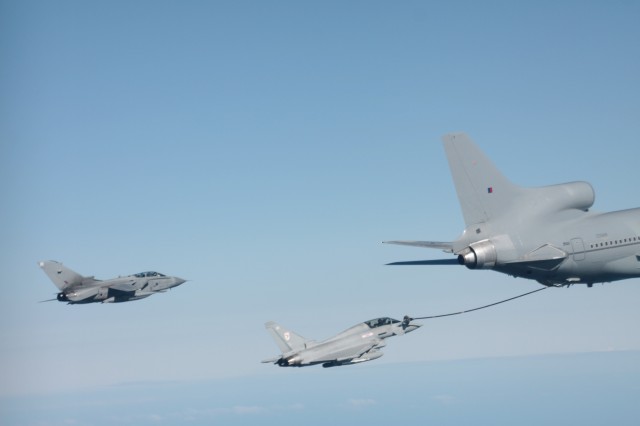 ’œChaos’ is joined by ’œLOS 82’ – a Tornado GR4 belonging to No XV Squadron (15 Squadron), based at RAF Lossiemouth in Scotland Photo: Graham Dinsdale

Ten minutes later, we saw ’œFAGIN 11’ slowly gliding into view a couple hundred yards to the right and slightly below – for the next 20 minutes or so we flew in close formation as we headed north then east, out over the English coast, to the North Sea. Our ’˜destination’ was Air Refuelling Area No 8, several dozen miles off the Lincolnshire coast.

By 11:50 we had taken up the usual anti-clockwise ’˜racetrack’ pattern, in the smooth, calm air at FL160, and awaited our first ’˜customer’. 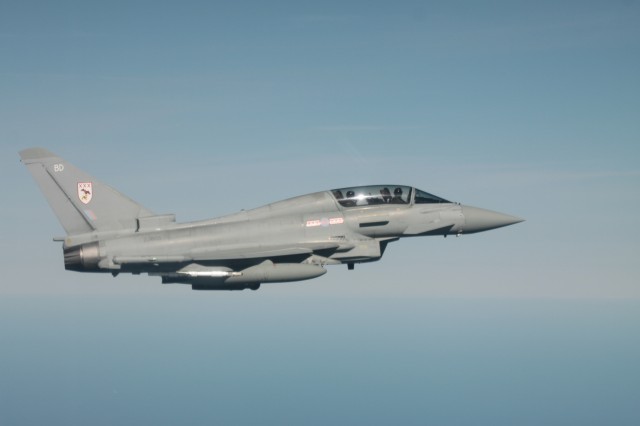 We did not have to wait long. Within five minutes, Typhoon ’œCHAOS 21’ belonging to 3 Squadron appears out of the sky blue heavens and without further ado, slowly reduces the distance to the center-line mounted Hose Drum Unit (HDU) and the trailing ’˜basket’. The pilot made no mistakes in hooking up at the first attempt and the transfer of fuel commenced. The Typhoon was obviously very thirsty, and he was still ’˜drinking’ 15 minutes later when we were joined by one of 15 squadron’s Tornado GR4s ’œLOS 86’. In the next half hour, three more Typhoons from 3 Squadron join the queue off our port side awaiting their turn: ’œRAMPAGE 31’, ’œRAMPAGE 32’ and, last but not least, ’œTYP 21’. 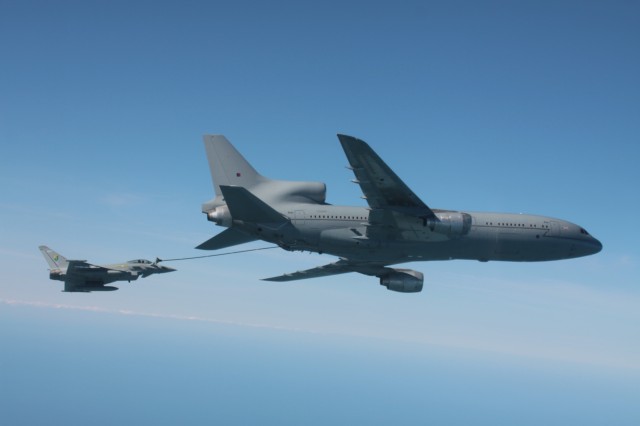 Air-to-air refueling is done on a racetrack pattern (not in a straight line, nor a circle), and the fuel flows all the time; here we are starting a turn – Photo: Graham Dinsdale

After just over an hour the air-to-air refueling part of the flight came to an end, and so too does another chapter in the history of British – and American – aviation history.

As we crossed back over the Lincolnshire coast, we went our separate ways: ’œFAGIN 11’ conducted a flyby of Cambridge Airport – home of Marshal Aerospace which carried out heavy maintenance on the RAF’s fleet of Tristar aircraft from when they first entered service. Then we flew over Derby, the home of Rolls Royce, the manufacturer of the Tristar’s three RB211 engines; and finally, on the southern coast of England, Bournemouth airport and the location of Cobham (an air-to-air refueling systems supplier). 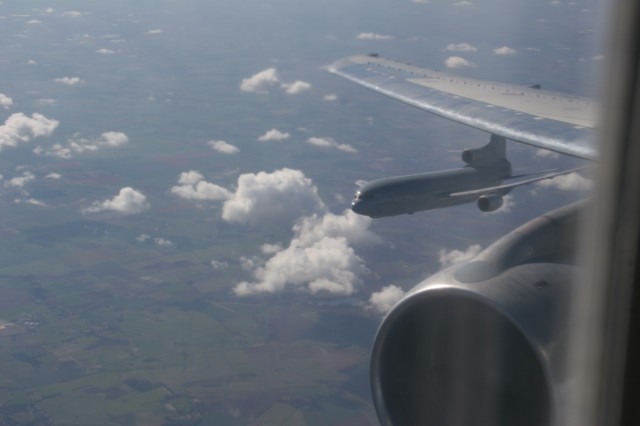 “FAGIN 11” landed back at Brize an hour later than the media. Meanwhile, onboard ’œFAGIN 12’ we headed back to Brize Norton; time to finally sit down and relax, pay a quick visit to the flight deck, chat with the crew, and consume our RAF lunch of sandwiches, chocolate bars, biscuits, and yogurt. 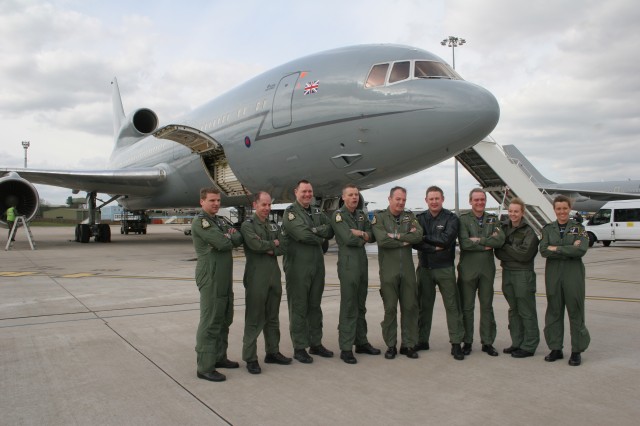 Approaching Brize Norton from the east, we ’œkissed’ runway 26 and slowly rolled out, turned onto the southern taxiway, and made our way back to our pan passing the C-130 Hercules, C-17s Globemaster IIs, and the Tristar’s successor, Airbus (A330) Voyagers. Engines were shutdown at 1:40 p.m.

There was no mad scramble to head for the exits; nobody talked – it was just silence as everyone reflected on what they had  experienced.

On the day of the flight, there were four Tristars at Brize Norton: One was being readied for its last flight to GJD Services, a commercial scrapping company located at Bruntingthorpe airfield a few miles away (about 20 minutes flying time) which is a few miles east of Coventry; another one had arrived a few hours earlier, having flown in with British troops from Camp Bastion, at the end of their operational deployment to Afghanistan, and was being de-militarized prior to its flight to Bruntingthorpe.  Additionally, there were FAGIN 11 and FAGIN 12 making their last operational flights.

During the afternoon and early evening of the next day (Tuesday, March 25th), the two remaining squadron aircrews flew the first two Tristars to Bruntingthorpe: first to arrive through the low clouds and rain was Tristar C2 (ZE704) and then thirty minutes later KC1 (ZD 950) appeared through the gloom and touched down on the short runway.

With no air traffic control tower on the airfield, no airfield radar, landing lights, nor aviation aids whatsoever, any landing was going to be a challenge, but for large ’˜wide-body’ Tristars the task was daunting.  That said, the two 216 Squadron crews took it in stride. The plan was for another RAF aircraft to fly both crews back to Brize Norton, but when it failed to appear, the head of the squadron arranged for them to be driven back on the two hour/80 mile journey as quickly and as safely as possible, climb aboard the last two tankers, and fly them straight to Bruntingthorpe.  This they did, and Tristar KC1 (ZD 948) and K1 (ZD 951) finally took off as the light began to fade. The latter was the final Tristar to land at 18:45 GMT – in the dark. With not even any approach lights, this indeed was a very professional piece of airmanship and flying.

It would be great to see the RAF donate one of these aircraft to the Wright-Patterson Air Force Museum in Dayton Ohio, and also to museums in Britian.

Great story and photos, Graham! As for nomenclature, is backtracking the same as what we Yanks call a back taxi?

John – The sad fact is Duxford were offered one for “free” and refused !