This morning I was able to take part in a Boeing media event involving a much heralded aircraft: Air New Zealand’s first 787-9. We’ve discussed what the cabin will look like before on the site, but it’s a lot different to see- and feel- it in person.

The tour commenced by taking a look around the airframe outside, but with the caveat that we had to stay within the gate lines of the delivery stall. This meant that I had to get creative with my angles. We could, however, also make use of the balcony of the Everett Delivery Center, which provided some great views.

The outside of this plane is amazing, but I was mostly there to check out what was on in the inside. After getting external shots, it was time to head onboard Air New Zealand’s brand new aircraft. A special moment for me as I’ve never even set foot inside a 787 Dreamliner of any flavor before. 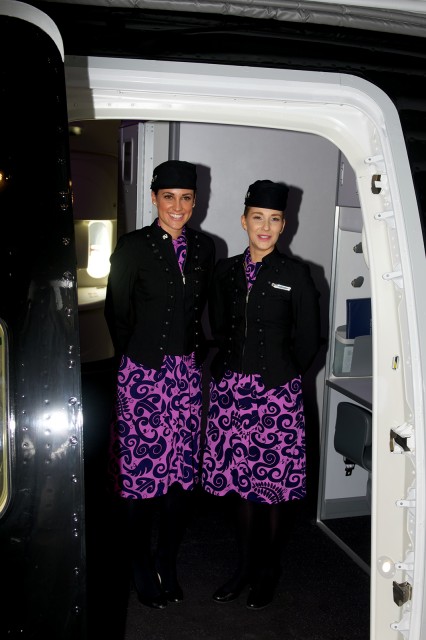 The first impression of boarding via L1 on Air New Zealand’s first 787 is that it’s so well lit and spacious. I know that’s a trait true for all 787s but it is a very open feeling cabin. The next striking fact is that Business Premier is in a 1-1-1 layout.

Not only does every seat have direct aisle access, but there’s no seat mate. Since Business Premier offers two person dining, one doesn’t need to sit next to someone they are flying with. 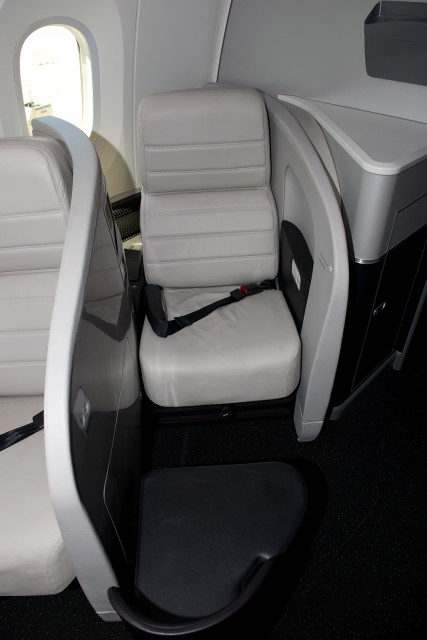 The 18 Business Premier seats boast 22 inches of width, 33 inches of shoulder room, and can be converted into a 79 inch bed. The seat itself is certainly reminiscent of Air New Zealand’s current business class offerings, but tweaked to be even more comfortable.

As far as herringbone seats go, it’s definitely the softest I have sat in so far — same goes for the bed. 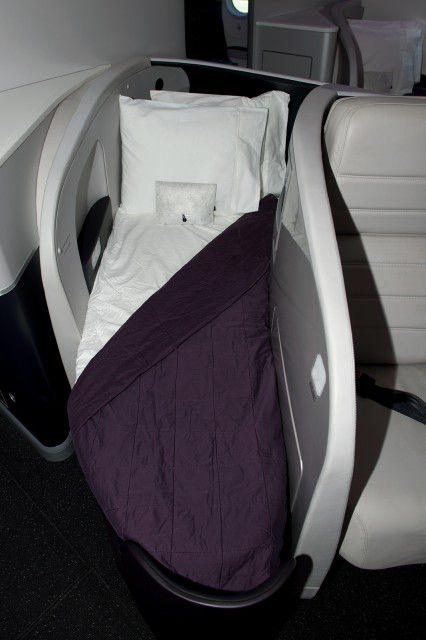 The IFE features an eleven inch screen across all cabins, but the real excitement comes from the fact that it is a custom system based off of the Panasonic eX2 product. For example, if the IFE goes down- there is local storage of the new-release movies so each seat so that there is always something to watch. When it is working, there is 2000 hours of content to choose from.

The real innovations are mostly in the user interface and the fact Air New Zealand has partnered with TripAdvisor to add thousands of pieces of information about the destination the passenger is being carried towards.

This system will be rolled out across the Air New Zealand long haul fleet, with the 777-300ERs being finished by the end of this year and the 777-200ERs as they go in for maintenance. 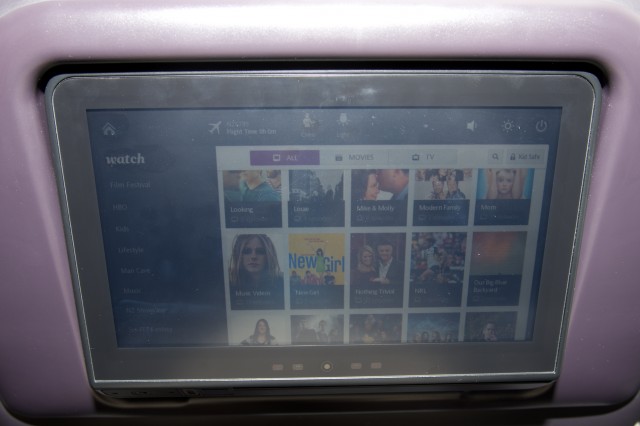 NZ’s new IFE system features more content than you could ever watch, and enough to satisfy everyone. Photo – Bernie Leighton | AirlineReporter

The IFE is also very fast, responsive, and well designed in terms of usability. The new system also features HBO content, so if you want to see a different dragon than Smaug on your way to Middle Earth- now’s your chance! 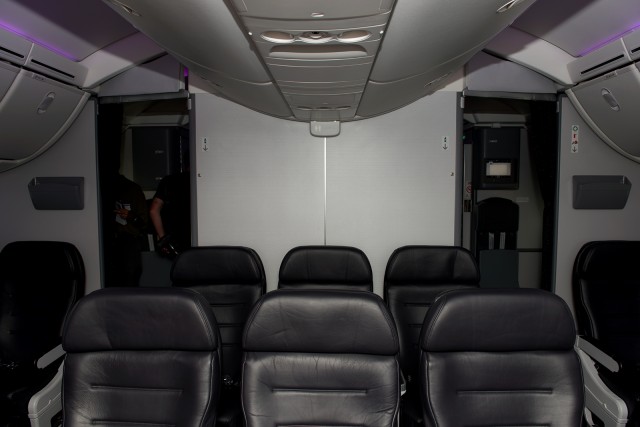 Premium Economy is another impressive offering aboard the 787-9 — it offers a full 41″ inches of seat-pitch. That number is not only important because it’s a competitive seat pitch, but it also allows Air New Zealand to offer a full leg rest as well as a foot rest in every row. There are twenty one seats in this cabin, making it feel very spacious and open. 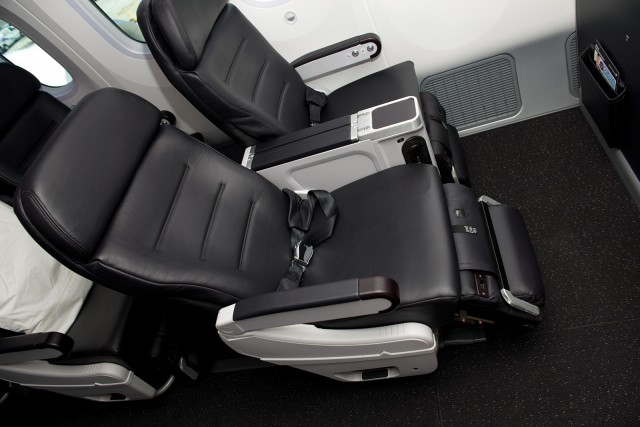 NZ’s premium economy seat. Pardon the angle, but it’s the only way to easily illustrate every feature at once. Photo – Bernie Leighton | AirlineReporter

To put things into perspective, 41″ is more pitch than most domestic first/business products. It feels just like one, too. On a 12 hour flight, that’s going to be hard to beat. Especially when you remember most domestic first/business products have a pitch of 38″, no foot-rest and let alone leg rest. I know, different market segment- but it clearly shows that Air New Zealand is ahead of the pack in Premium Economy innovations. 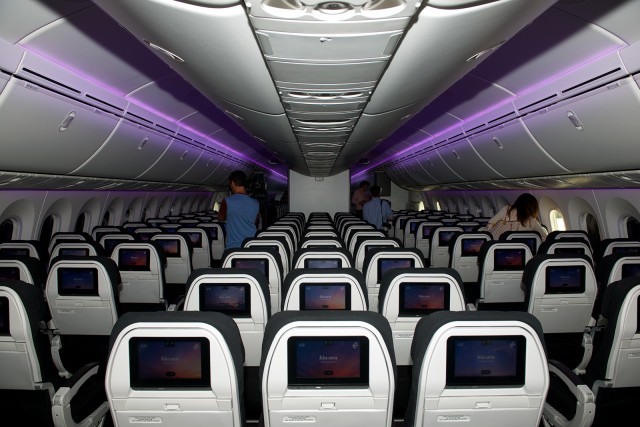 Economy, of course, features Air New Zealand’s very own Skycouch (aka Cuddle Class). There are fourteen rows of the Zodiac made Skycouch.

They are padded quite well and have a focus on creating a feeling of space, which is pretty easy to attain when they offer 5″ of recline. 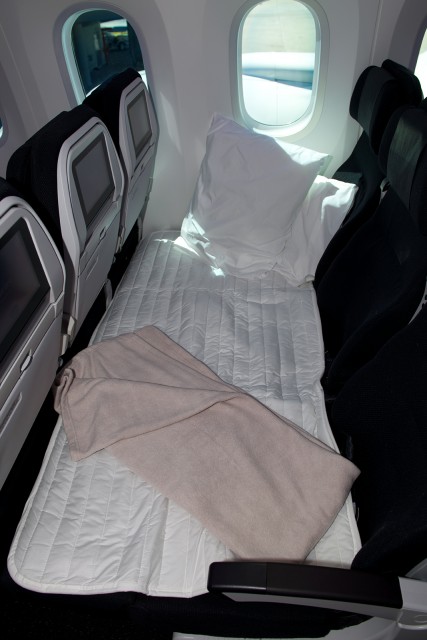 It’s a truly lovely aircraft and I look forward to flying either it or its siblings one day. Unfortunately for us Americans that will be a bit difficult for a while. When the aircraft enters commercial service on October 15 of this year, it will be flying the Auckland-Perth route. 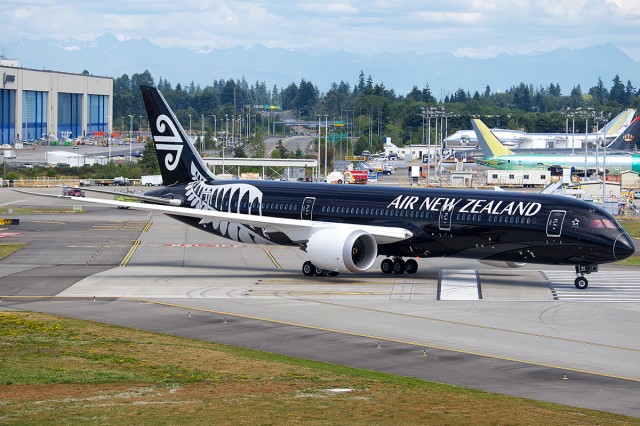 Air New Zealand’s seems to always strive to have a class-leading product on their aircraft, as they have shown with each successive generation they’ve added. The 787-9 is not a drastic improvement over the 777-300ER that proceeded it- but rather a refined, superior, evolution.

https://www.airlinereporter.com
Flying on Sun Country Air Surrounded by Children
Flying on a Genex Antonov AN-26
10 Comments

the plane and the uniforms look like its a flying Hearse from a funeral home. just too dark and morbid for me.

I was thinking the same. Too dark. Strange idea from Air New Zealand.

Not to mention the effort required to keep the a/c cool on the ground in the summer. (Lucky its winter down under right now) The All Blacks is the New Zealand men’s national representative team in rugby union, which is regarded as the country’s national sport.

Well, allow me to be the first to praise the livery. I’m soooooooooooo tired of eurowhite, and while all black may be a bit overkill, it’s a nice departure from the mundane, boring white coat that pretty much everyone else starts with.

JL I totally agree. This is a GREAT livery. Nice to see some fashion!

Absolutely gorgeous! That livery is unique and stunning. Props to Air New Zealand for not using the same boring white paint job every other carrier in the world uses!

On a Boeing Tour I did at PAE, the guide commented about the majority of airlines having a dominant ” color ” of white in their ” color ” schemes or livery. She further commented ” white is light “; meaning a lighter airplane has less fuel burned.

Air New Zealand so over hyping the Blacks team – well here we are. I don’t know any Safety Officer with an airline that would allow a extremely piece of machinery like this to be painted black – let alone the whole fleet. How is this airplane to be seen in crowded terminal control areas – dusk, clouds and bad conditions? UA got this same complaint with battle ship grey paint job – that well blends in with real dark grey clouds. I think they are wonderful outfit to fly – a bit cheeky and fun.

Congratz to AirNZ on receiving their first 787-9. Boeing said this version is stretched by 20 feet and will carry up to 40 more passengers an additional 450 nautical miles. Thou this plane stretched by 20 feet still consumes 20% less fuel than the other aircrafts in its class .. I read here that 787-9 flight deck is equipped with dual head-up display (HUD), flat panel multifunction displays, dual electronic flight bags (EFB) and an electronic check list …this bird really has advanced technology equipped with … I am loving it …