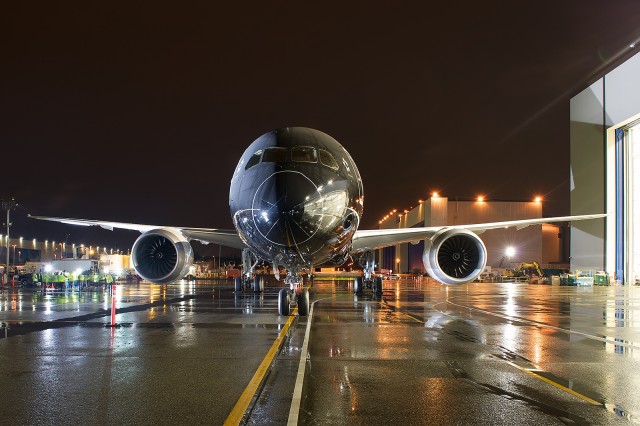 Air New Zealand expects to take delivery of the aircraft towards the middle of this year.  The tentative, October 15 2014, start date for commercial service will be to Perth, Western Australia from Air New Zealand’s home in Auckland.

The aircraft will feature an all new Premium Economy cabin- as well as Air New Zealand’s other trademark amenities. 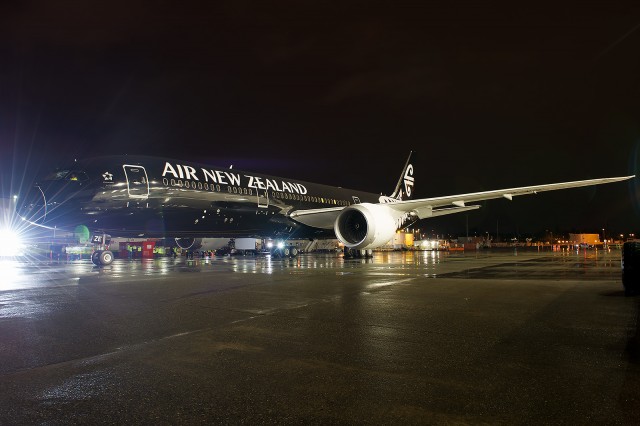 If you ask me – this is the best 787 livery yet. The photos (taken at night using my tripod) only look 3/4’s as good as it does up close. Air New Zealand has stated that one plane of every type will receive the all black paint treatment.

Good job cutting me out of the pics.

Give me a few minutes, I’ll blow your minds.

Looks absolutely hideous. Black is not characteristic of our beautiful colorful nation. It is inspired by NZs infatuation with Rugby foot ball which no one overseas understands or appreciates or cares about. A huge mistake Air NZ, change the color immediately. A total and embarrassing disaster.

Also speaking as a Kiwi, this is just not true & time has passed since this comment was made to prove this wrong – the black-painted Air NZ planes are well recognized & celebrated (not to mention look fantastic). From an aviation enthusiast point of view, bring it on, everyone likes these planes in the sleek black jobby & knows where they are based – job done!

It’s good to have modern airplanes and to have appealing designs. However, there has been a trend in New Zealand to no longer include the New Zealand flag in our passports or often anywhere else visible with regards to high profile events and to only use a silver fern. It’s an issue that needs to be addressed.

Although the design on the back looks good, there should also be consent to have a small NZ flag there somewhere on the design, if an official symbol is going to be appropriated or adopted. It represents our country and is the symbol seen. The flag issue is something that Air New Zealand ought to consider and to make inclusion on somewhere in order to be fully representative.

It could be smaller and at the front or somewhere on the side or on the tail in addition and is easy to add. It’s New Zealand. Our flag is also very important in our representation.