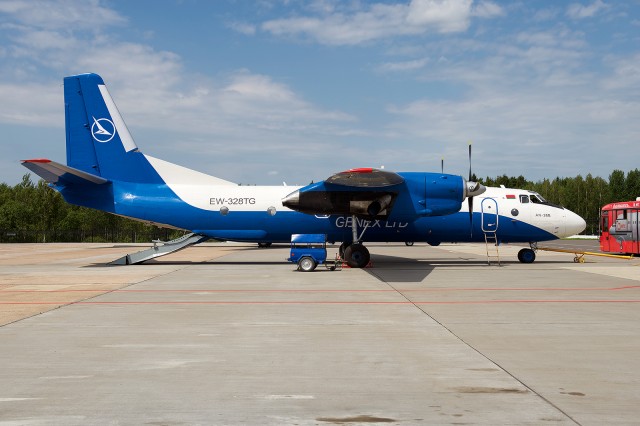 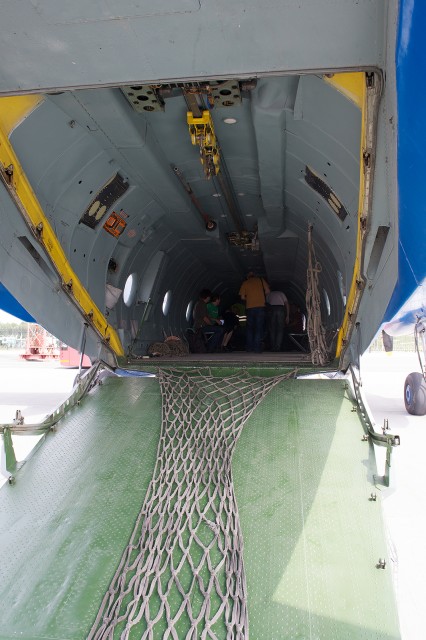 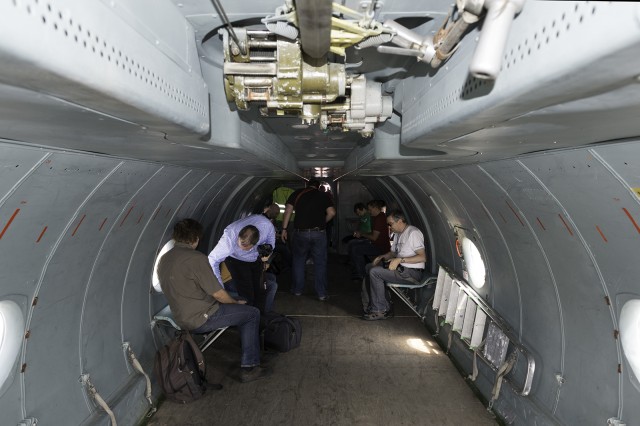 The, spartan, cargo hold of an AN-26. Love the plywood floor. Photo – Bernie Leighton | AirlineReporter

So I sat down, strapped myself into the lap-belt (a canvas material), and waited for the cargo door to thud shut. Once that was done, it was time for the wail of the Kuznetsov Â APU on the number one engine.

There was a ground power kit, but to my understanding that was necessary to start the APU. The engines take more effort to get started than you’d expect for an aircraft designed to operate independent of any support.

Of course, I boarded late so I couldn’t actually see the props start turning. What I could do, however, was hear them. I know, same engines as an AN-24- but much, much, less sound insulation. It’s sort of a persistent scream — a loud howl attached to a helicopter-like sound of the props beating the air into submission. Every time the throttle is adjusted you can hear the chorus of the engines edge higher. 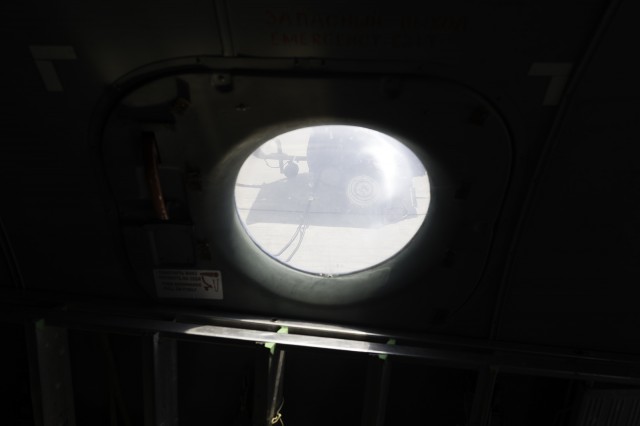 One of four whole windows on an AN-26. Allowing for some view. Photo – Bernie Leighton | AirlineReporter

Taxi was another disorienting experience — there’s nothing like facing sideways with no windows. The AN-26 can really move, again- it’s an Antonov. Like the AN-12, it can turn on its axis.

So, after backtracking on the runway it was time to take off for our short flight to Minsk-1.Â The takeoff was extremely powerful, I was almost thrown into the person next to me.Â Unfortunately, the flight was quite turbulent.

This would have been fine on any other aircraft (or if I was facing forwards), but it was also around that time that one of my fellow passengers began to become disoriented and a bit nauseated. I spent the rest of the time wondering if I was going to need an involuntary change of clothes. Not because of my own lack of fortitude, but out of fear of a chain reaction.

Upon approach into Minsk-1 we knew we were not going to land, we executed an extremely low pass. The best part was the pilot fire-walled the throttles and gave a huge wing wag. It was so intense we could actually hear the air rushing over the control surfaces.

It was time to begin our climb to 10,000 feet so we could open the cargo door.Â In retrospect, that was probably a mistake –It seemed like a good idea at the time!

For those of you not familiar with the way the cargo door opens on an AN-26, part of the door assembly retracts upwards into the fuselage, two ventral jump-guarding fins pop out to tamp the airflow immediately around and outside the door. The remainder of the door goes downwards and retracts into the fuselage.

It retracts into the fuselage so that, in war time, one can do a low pass over a flat area and kick the cargo out onto said surface without having to slow down or land- all while not having the door hit the ground and kill everyone and those nearby. This is a wonderful engineering decision and I will now proceed to explain why.

After the slight ear pop, the roar, and the thud of the cargo door opening- all of us assumed that after a few minutes the cargo door would shut and we’d be on our way back to Minsk-2 to go fly on even more, obscure, Russian aircraft. For instance, an AN-2 or IL-76.

First the loadmaster came to the back and started to fiddle with the control panel/circuit breakers in the breeze.Â Nothing. 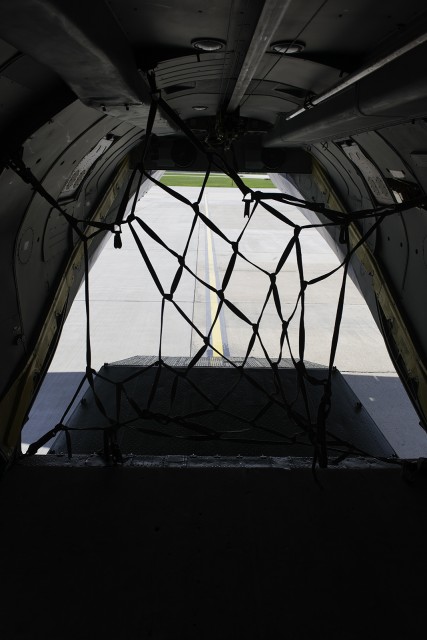 Then the flight engineer came out to poke at the same circuit breaker box. He then went back to the flight deck and grabbed something akin to a broom handle.Â On returning with this broom handle, the engineer put it into a pump like structure under the alternative hydraulic control panel, and started to yard on it.

My knowledge of engineering left me with the assumption that he was trying to manually pressurize the hydraulic lines to “jump-start” the gate closing.Â That didn’t work.Â So then both the heroic loadmaster and the flight engineer came out to, futilely, mess with both at once!

That’s totally going to work, absolutely, it has to.Â Who thought that was a good idea?

I should mention that when we were boarding, we are pretty sure we saw one of the ground engineers accidentally turn off/depressurize the hydraulic lines so there was not a single way the cargo door would ever be closed in flight.

The problem, in all actuality, was that the Belorussian CAA would rather not have aircraft landing with an open cargo door.

Not because it’s dangerous, but because you might accidentally be able to see Alexander Lukashanko’s business jets. Worse, you might be able to take a photo while on the ramp at Minsk-2. The horror!

So, with that in mind- I was starting to get a little annoyed that we were doing wild tail shaking and roller-coaster like maneuvers to get the door closed.

I was enjoying the amazing noise of the AN-26 with the cargo hatch open, but conversely, gazing backwards out the cargo door and watching two Belorussian men who, due to similar ancestry, bore vague resemblance to me bashing on things so perilously close to an open door was a little scary.

Yes, before I remembered that the cargo door retracted inwards I was a little scared. When I remembered how Russian cargo doors functioned- I went back to being bemused.Â I much prefer Â bemusement to terror. 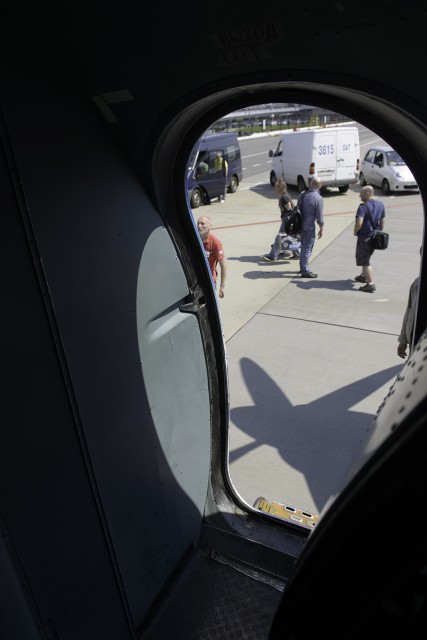 The crew and, it would seem, passenger door of an AN-26B. Photo – Bernie Leighton | AirlineReporter

So, eventually, after burning through all the fuel and eating into the reserve- the Belorussian CAA relented and agreed that we could land at Minsk-2 with the door open.Â Now that’s awesome.

I wish I could’ve been standing up to take photos out the cargo door of the runway underneath us, but it is so cool to actually see the tiny movements of the rudder and elevator, backwards, watch the flare, and well- see the cargo door hanging gently in the breeze.

Naturally, with the hydraulics being of questionable utility- the cargo door didn’t magically swing back down to ground level.

We had to exit this 1983 vintage aircraft via the front door.

I have flown in C130s twice with the RNZAF. They never opened the loading ramp in flight I would have made the flight a bit more interesting but still I do enjoy flying on herks the noise and siting on webbing seats makes it very different from your average airliner experience.