Vancouverâ€™s spring rain actually let up about an hour before the inbound flight turned onto final for Runway 08L. After a smooth touchdown, the 767 taxiied through a welcoming â€œwater cannonâ€ salute, courtesy of YVRâ€™s emergency services. Our media group was on the ramp not far from the fire trucks, and, thanks to a change in the wind, we got nicely soaked. At least ANA got a free plane wash.

Our group got back to the gate area as the inbound passengers deplaned. After finishing their speeches, dignitaries from YVR, ANA, and the Governments of Japan and British Columbia, took wooden hammers and whacked open a ceremonial drum of sake, which was served in traditional wooden boxes made especially for the event. Both inbound and outbound passengers enjoyed an eclectic buffet of sushi and sausages, to the sounds of a Japanese koto. 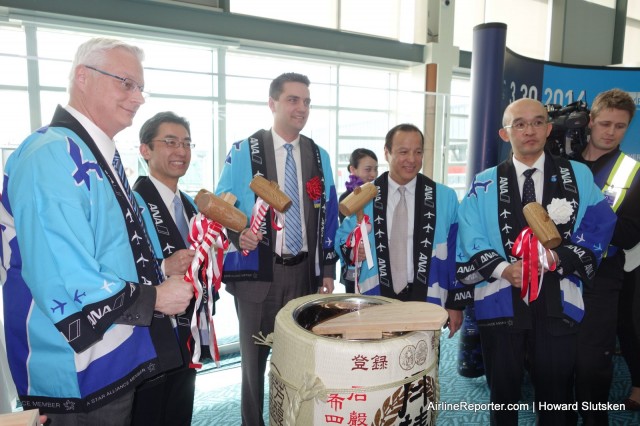 Somewhat surprising to AvGeeks, ANA decided to put the venerable 767-300ER on this new route. Many expected to see a Dreamliner, perhaps in response to Japan Airlinesâ€™ switch earlier this year to a 787 from a 767 for its NRT-YVR route. But itâ€™s going to take some time for ANA to take delivery of the rest of their 787s, so for now, YVR will see the 767.

Our plane was ANAâ€™s â€œ214â€ configuration, with 35 Business Class (J) seats, and 179 Economy (Y) seats. The inaugural to HND was almost full, with 173 passengers in Economy and 31 in Business Class 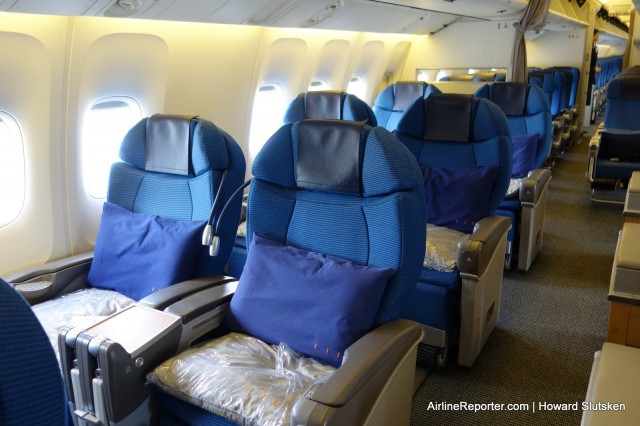 With all the events at the gate, boarding began a bit late, about 25 minutes before the scheduled 4:50 pm departure. I was on board quickly, and after taking a few photos, settled into Seat 8G in Business Class. Although ANAâ€™s 767s arenâ€™t the newest planes in the fleet, this 20-year-old aircraft was spotless. However, as would be expected, the Business Class seats were an older-style recliner, with extending footrests. The In-Flight Entertainment (IFE) system has a 9″ screen that stows beside the seat, as does the folding tray table. Considering that ANA will be replacing 767s with 787s, Iâ€™d be surprised if the older planes ever get an update to â€œlie-flatâ€ seats, but it sure would be nice. Not that Iâ€™m complaining.

Pushback from gate D55 was about ten minutes behind schedule, and after engine start and disconnecting from the tug, ANAâ€™s YVR team lined up and waved goodbye to the flight. Â A nice touch! 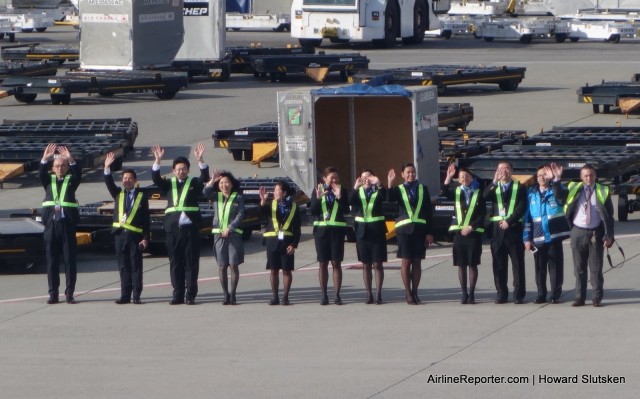 While taxiing to Runway 08R, I noticed that the ceiling- and bulkhead-mounted monitors were displaying a forward view. The camera must be mounted forward of the nose gear, because the view ahead was clear, without the plane being visible as with the tail-cam in the A380. It was great to follow our progress to the runway, with a view as if I was on the flight deck. I wish. 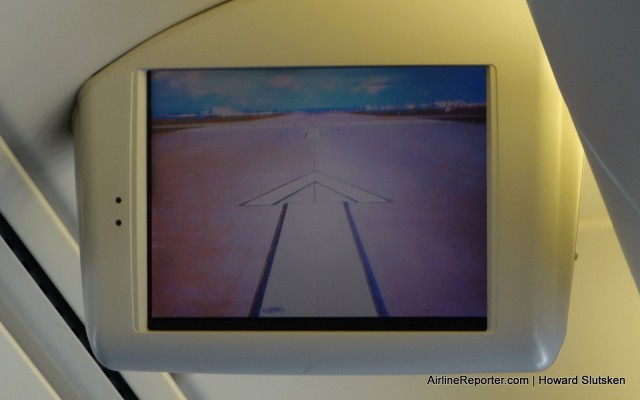 We turned onto the runway, and waited for a moment before the engines spooled up to takeoff power. After a short 30-second ground roll, the 767 rotated and lifted off, and were on our way to Haneda!

Stay tuned for Part 2 â€“ our flight to HND, with sunset chasing us all the way.

I contacted ANA a while ago to see if they would send a logojet B767(eg.Mohican retro) like Qantas did in 2006 for their return to YVR.Their reply was unfortunately the logojets (B767)were used domestically.

Seems someone have been listening. ANA sent the Panda (JA606A) to YVR today (May 17)

I am looking forward to part 2!

Does AC have their code on this? They tried YVR-HND and it didn’t work – I wonder if ANA is offering a better schedule, and AC can feed it.

Yes, the flight shows up on the AC website as a codeshare. AC6249 to HND, AC6248 coming back to YVR. I wonder if AC will return the favoUr when they launch their YYZ-HND 787 service.

I remembered ANA’s B763s having nosewheel cams since my first flight with them as a 9 year old from KUL-BKK in 1998!
Back then there was only ‘main screen entertainment’, but I had enough resolution to remember the plane landing on it’s right main gear!