Boarding Singapore Airlines’ A340-500 at LAX

THE START OF THE JOURNEY

Hot damn – over 21,000 miles in less than four days is quite the adventure, but I signed up for it with smile. To cover the world’s two longest flights, I recently traveled from Seattle (SEA) to Los Angeles (LAX) to Singapore (SIN) to Newark (EWR) and back home again to Seattle. Lots of miles, lots of time in the air, and lots of good fun.

I have already shared my live blog of the world’s longest flight, but I want to tell this story of what the whole epic process was like.

Although I was looking forward to a big high-end adventure, it all started with a bus ride to Seattle-Tacoma International Airport, followed by an economy flight on Alaska Airlines to LAX. I felt that with each step towards Singapore I was going a bit more upscale.

Getting down to LAX was easy and uneventful. I took an early flight to make sure that I had plenty of time to check out the new international terminal at LAX, but I always forget that the ticket counters do not open so early. Luckily, there were some food options that allowed me to eat before I was able to check in (have to say that the food quality at the Daily Grill was quite disappointing this trip).

I checked in and was escorted by the airline to the new Star Alliance Lounge for a tour. I was hoping to also have the time for a full tour of the new Tom Bradley International Terminal, but with the lounge and Airbus A340-500 tour, I wasn’t able to – next time. 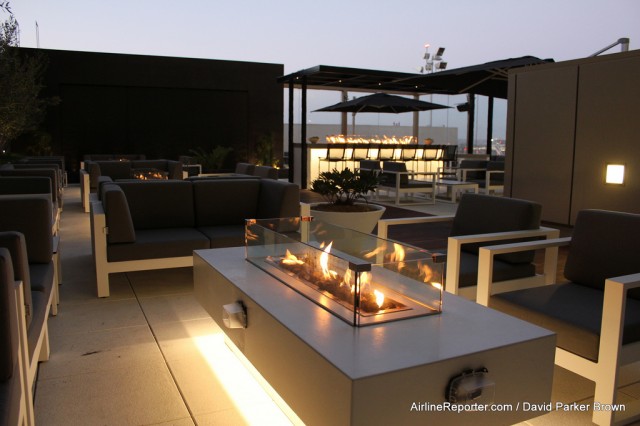 It was hard leaving the outdoor section of the Star Alliance Lounge.

After my visit to the lounge (and a bit of relaxation, I headed to the gate early. I was set up to pre-pre-board the Singapore Airbus A340-500 to get some photos with no passengers on board.

I was given a tour of the aircraft by two very friendly employees (thanks Heidi and Leo), which included the flight deck (where, unfortunately, I was not able to take any photos). 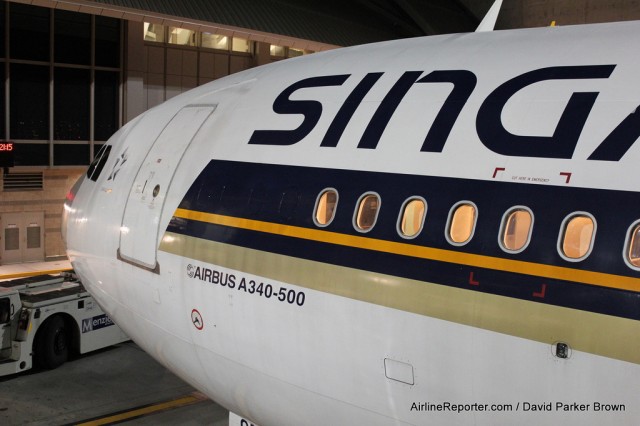 Checking out the A345 before general boarding

One of the coolest parts of the tour was speaking with the security guard who is posted in the jetway to make sure no one unauthorized is getting on/off the aircraft.

She has been working that post for about 20 years and explained to me how for her and for many others, this LAX-SIN route was more than just a flight, but a family. As I stood in the jetway, some of the cabin crew arrived and it was like a homecoming; almost everybody knew everybody. For many, this was to be their last LAX-SIN flight, and it was a sad moment. 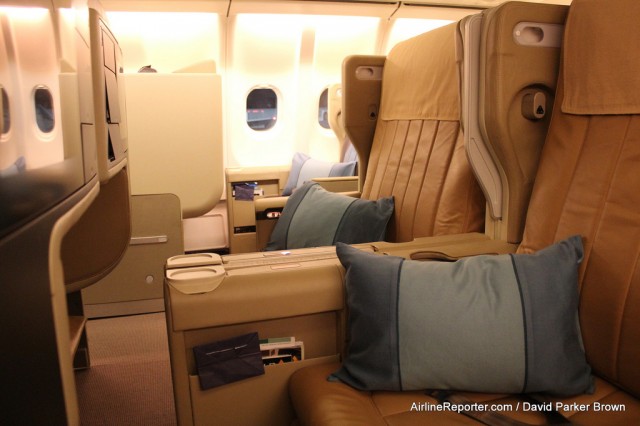 Not a bad place to hang out for nearly a day

After my tour, I went back into the terminal and waited for the standard boarding process to begin. The gate agent announced that status members could board, then Business Class passengers were able to board. I found this amusing, since all passengers on this 100-seat flight were Business Class.

I quickly found my seat, 30F, which I chose because it was a “bulkhead” and has a wider area for one’s feet.  After experiencing all the lavatory traffic in front of me, I almost wished I chose one of the seats farther back. 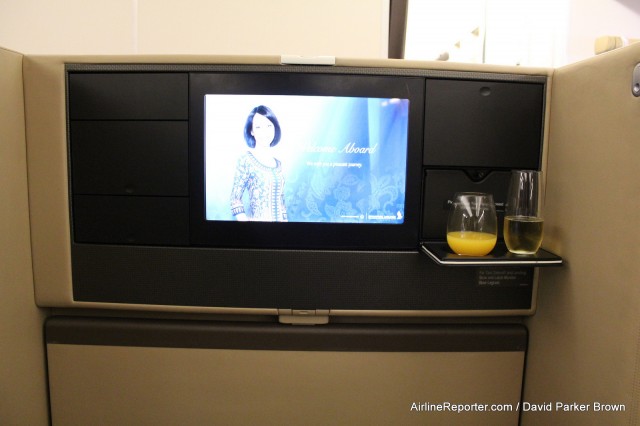 Since I pretty much documented the heck out of my Singapore to Newark flight in my live blog, I don’t want to re-hash many of the similarities.

The biggest difference for this flight was being able to just relax (no live blogging) and enjoy the flight. Part of the relaxation was taking a seven hour nap (is it a nap when it’s that long?) after the meal service. What was surreal for me was that after eating, watching a movie, and waking up from my nap, I still had eight hours of flight time left and that was a good thing. 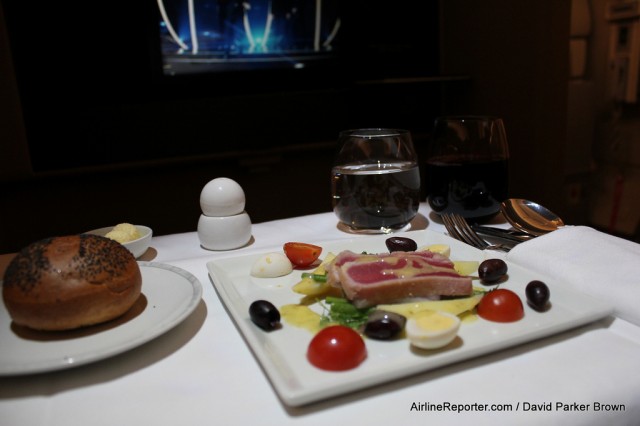 Lots of good eating and drinking on the flight to Singapore

Although the Singapore Business Class product on this A340-500 was still impressive, its age was showing. This makes sense, since the aircraft have already been sold and the flights have now been stopped. There was not much motivating Singapore to keep them up. Also, it probably didn’t help that I recently took a tour of Singapore’s new product, which is quite the improvement. 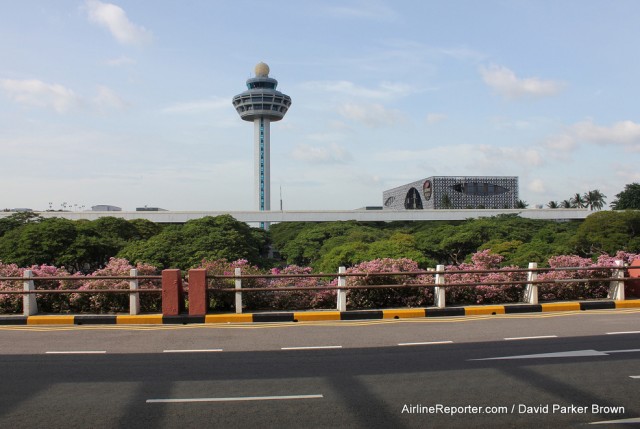 IN SINGAPORE FOR 30 HOURS

We landed early at Changi Airport, at about 5:00 AM local time. It was weird because I felt refreshed despite taking such a long flight, but I was still very motivated to take a shower.  I was really hoping that I would be able to check in at the Crowne Plaza hotel located with-in the airport, and luckily for me, there was not only a room ready, but also one that overlooked the airport. 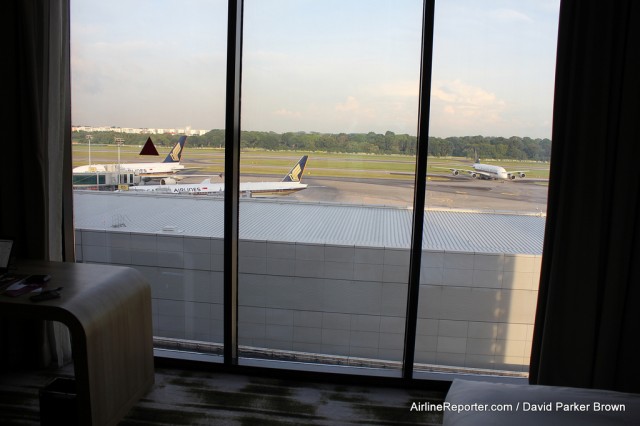 There are a few hotels around the world that provide some pretty amazing spotting, and the Crowne Plaza is one of those hotels. Not only was the room itself quite nice, the view was amazing. I ended up rearranging the furniture to have a better view while getting some work done.

I had about 30 hours on the ground and wasn’t sure what my game plan was going to be. I decided to play it by ear and see how I was feeling. I had visited Singapore not to long ago for a few days, but wouldn’t have minded getting back into the city.

But I was also mindful that I was planning on staying up during the world’s longest flight and needed my rest to prepare. Before I could make any decision, I needed a shower, some food and possibly a short nap.

CONTINUE READING WITH PART TWO OF MY ADVENTURE…

NOTE: Singapore Airlines provided my LAX-SIN-EWR flights and accommodations in Singapore. All opinions are my own.

any hints on booking first class seats in the dreamliner with united air miles…they are all greyed out in the web page?

Had no issues getting a UA Dreamliner from SFO-IAH recently using miles for a business/first seat.

Thank you for the beautiful photos. Beside the excellent photos you took, is it possible next time you take photos of the wings? For example, flaps and spoilers and other mechanical parts.

I have been to SIN many many times and never knew there is an Aviation Gallery at T3. My last trip in Nov 2013, I transit through SIN 3 times. I spent nearly an hour at T1 watching the “Raindrop” display.

The best room at Crowne Plaza Changi Airport for spotting and photography is Room 909. It is at the top floor so the view is not blocked by the boarding bridges and planes. It is also next to a small open space to the apron. I watched the plane landing/take off from the comfort of the air conditioned room and just run outside to shoot the pictures.