On Sunday of this week, Amazon.com CEO Jeff Bezos made some pretty outrageous claims about the future of his company. Specifically, he said his goal is for Amazon Prime customers to receive parcels within half an hour of purchase.

Okay, so what? Ordinarily us Airline Reporters don’t really cover matters of delivery. We’re happy to talk about FedEx, UPS, and other cargo carriers that bring goods to integration centers and then, eventually, to customers. This, right here, is the future of delivery. Point-to-point, airborne, and unmanned.

The quadrocopter is not a new concept in the door-to-door delivery world. University students have toyed with the idea for such things as pizza delivery. This is the first attempt that I would call serious. 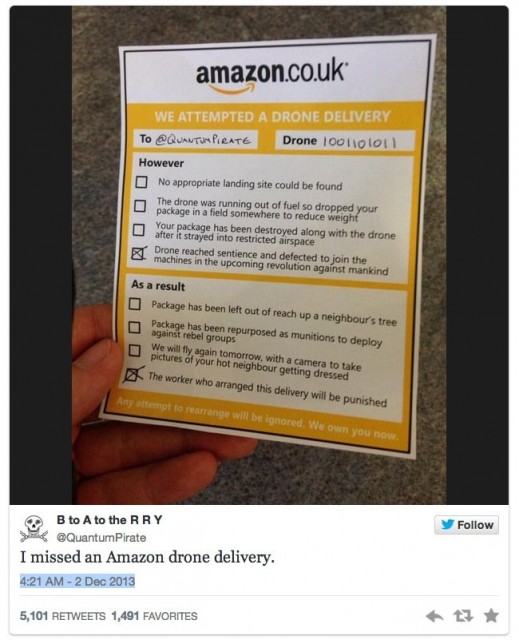 Amazon has a large amount of capital to spend on research and development. Moreover, they have the impetus to disrupt what customers have come to expect from both the brick and mortar and online retail experiences. If Amazon can deliver a reliable, half-hour delivery solution, they are capturing the sense of instant gratification that most brick-and-mortar retail stores can provide. They are also cutting costs. Amazon, presumably, will operate their own UAVs – and even though they have negotiated shipping rates with all the major global integrators and shippers, none of them can beat the cost of a small UAV.

I look forward to seeing where this technology goes. Because, unlike many people – I don’t see a wave of  “drone robberies” where people near the fulfillment center shoot down the UAVs to steal the contents below. Even if they did, the cops could just look for a dumpster full of Amazon Prime Air boxes.  What do you think – will Amazon harness the power of a drone fleet?

I think Bezos should be congratulated for changing the way people think so quickly!!