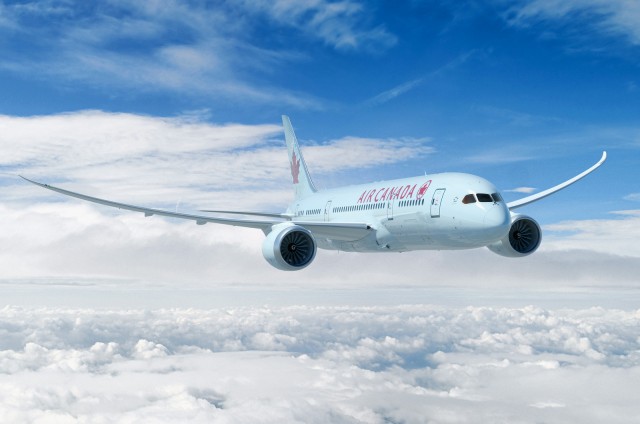 Air Canada has just released details of a new cabin design for their soon-to-be-received Boeing 787-8 Dreamliner. The first three aircraft will be delivered to Air Canada in the spring of 2014. The first AC routes to receive the 787 will start on July 1, 2014 from Toronto (YYZ) to Tel Aviv (TLV), and a new Air Canada route from YYZ to Tokyo-Haneda (HND). The Dreamliners will also fly on select domestic Canada and international flights on a “preview” basis as they come into the fleet, which we’ve seen with other new 787 operators.

Not unlike AC’s new 777-300s, the Dreamliners will have three cabins – International Business Class, Premium Economy, and Economy. The 787-8s will have a total of 251 seats (comparable to LOT Polish’s 787s, seating 252, which we featured earlier this year). Air Canada describes the 787’s cabin color palette of slate grey and neutral tones, accented with “Canadian red” and “celeste blue”, as being contemporary and sophisticated.

The 787’s Business Class isn’t like J-class in the new 777 or older AC planes. The new 787-8 configuration is a “reverse herringbone”, with four-across seating in a 1-2-1 setup, for a total of 20 lie-flat seats. Â AC’s older wide-bodies have a “herringbone” Business Class, where the seats face towards the aisle. Instead, the outer pods in the 787 will face the windows, and be angled towards each other in the middle of the cabin. I’m looking forward to seeing this setup; it isn’t easy to look out the window in the current J-class, and it’s challenging to chat with a partner when you’re both in the opposite-facing middle seats. The 787’s window seats might be a bit quieter, too, because your head won’t be up against the outer wall of the fuselage.

The 787s will have new features added to Business Class, including a massage feature in the seats, an 18″ IFE screen with a touch control handset, and a new espresso and cappuccino service for international flights. 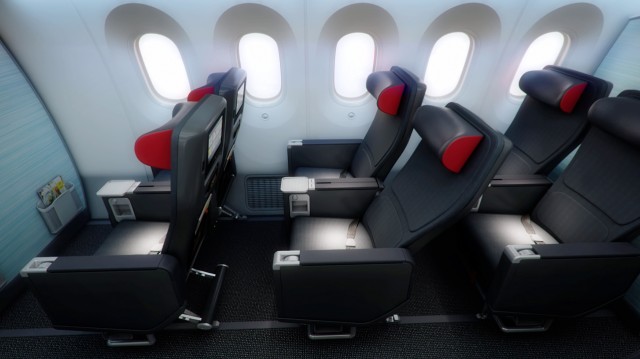 And then we come to the new 787-8 economy cabin, which sports 210 slim-line seats in a 3-3-3 configuration with a 31″ seat pitch. In their press release, AC says that the configuration provides “personal space consistent with the comfort of Air Canada’s current Economy cabin.” Â The seats are a bit wider than in AC’s new 777s, at 17.3″ vs 17″, but the 787’s five-inch seat recline is one inch less than the new 777’s. Consistent? Perhaps. Comfortable? For the 12 hour-plus flight from TLV to YYZ? Let’s wait for the first passengers’ impressions. 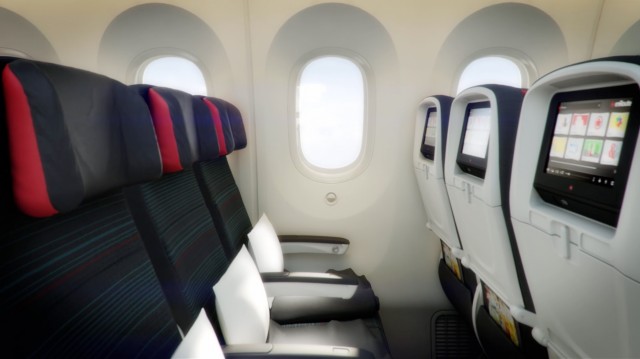 What do you think about this new cabin for Air Canada’s 787s? Have you flown an international business class with this configuration? How about a 9-abreast 787 economy flight? Leave a comment.

http://www.wingborn.aero
Flying Over 21,000 Miles to Singapore in Four Days – Who Needs Sleep? Part 1
An Overview of First Class Pajamas From Around the Globe
6 Comments

No thanks on the 787 9-abreast economy seating. When my wife and I travel to Europe we prefer window-aisle pairs, so I’ll look for a 767 or A-330/340 for our next trip. The 787 cabin is 15 inches wider than the A-330, but they are squeezing in one extra seat per row. It is too bad the bean counters are ruining what would have been a great passenger experience on the 787 with an 8-abreast configuration.

I’m pretty small (5’5″) so the less leg room of the new AC widebodies affects me less than others but I can’t imagine being taller than 5’8″ or 5’9″ on a long haul flight in one of the new 777’s or in one of these in economy class.

The United Dreamliner was more comfortable. The ANA 787 had a retractable footrest that made it uncomfortable for me to stretch out. And it had the seat that slides forward rather than retracts … which was not really comfortable. The takeaway for me is that seat width isn’t the be-all end-all of comfort.

That said, ANA battered United on the service and food. It was a dead draw on entertainment.

Thanks for the look at the latest from Air Canada!

After removing the A330 from the fleet they will also be removing the A319/320/321 and replacing them with the Boeing 737 Max resulting in a 100% non-Airbus fleet. There will still be Bombardier (Express) and Embraer aircraft.

It is not my first time to visit this site,
i am browsing this site dailly and get nice facts from here every day.