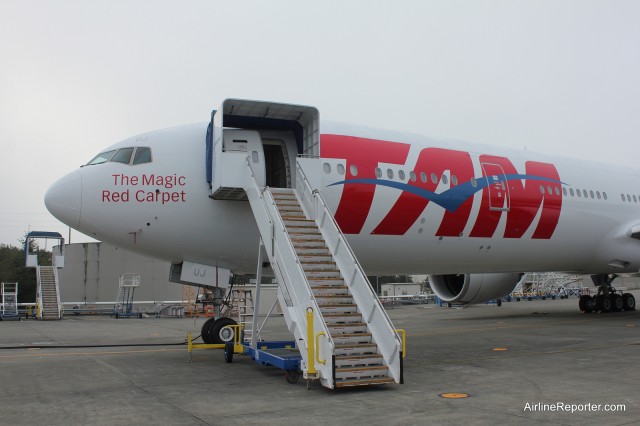 Time to climb the stairs, put on some booties, and check out the Magic Red Carpet. Photo: David Parker Brown

Touring a brand-new plane is quite a treat; it never seems to get old. The first thing to remember is not to break anything! (That is actually a pretty good rule to have anytime that you’re on a plane, but especially one that has not been yet delivered.) Boeing obviously wants to deliver the plane in pristine shape and I would figure that TAM likes getting their aircraft, valued at over $300 million, in working order.

After reaching the top of the air-stairs, I put on some white booties to go over my shoes to ensure the carpet and flooring would not have unnecessary wear. The booties are pretty standard operating procedure and they make gliding on the flooring quite easy. 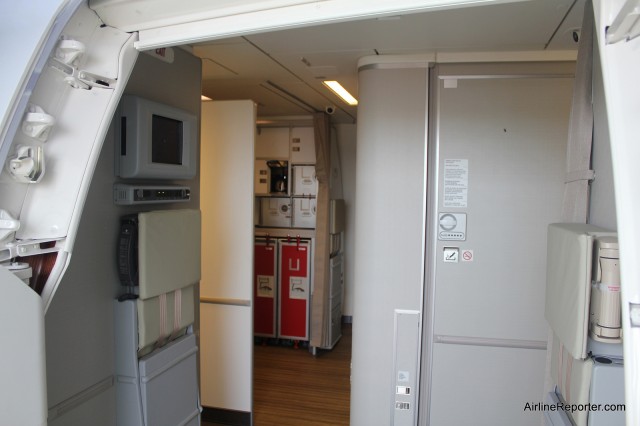 The entryway to the TAM 777 is spacious and warm, given the usage of wood floors. Photo: David Parker Brown

I have to say I was a bit surprised when I first boarded the aircraft. On the nose of the plane, it clearly states, “The Magic Red Carpet,” but stepping inside, the floor was wood. Now, don’t get me wrong, I always like a wood floor (especially on a plane) but I felt I was missing something. Stepping into the aisle, I looked up and down and still no red carpet, just gray – what gives?

Turns out the “red carpet” is more of an concept than a physical thing. “This refers to Rolim Amaroâ€™s idea of red carpet service that goes back to the founding of the airline in the 1970s,” TAM explained to AirlineReporter.com. “Today we donâ€™t actually have a red carpet (except for at the door/stairs) â€“ it is a promise of red carpet service for all passengers and to treat customers with human warmth and affection. For TAM flights, the Captain and Co-pilot and all of the staff line up in a receiving line a great you as you board. This is the red carpet service in action.”

I guess I’d rather have the level of service versus the actual red carpet. Plus, I think that the wood flooring in the galley and gray carpet down the aisle match the decor much better. 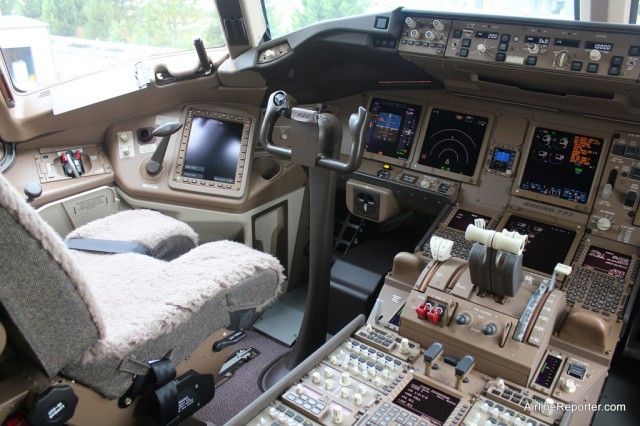 I know that after entering, I probably should have taken a right to check out the passenger cabin, especially First Class. But I couldn’t help myself – I headed left to check out the flight deck.Â  Each cockpit just seems like a technical work of art and this one was a bit more impressive, since I was able to see those large Boeing factory doors out of the windscreen.

After getting my fix on the flight deck, I got down to business and headed to the First Class cabin. 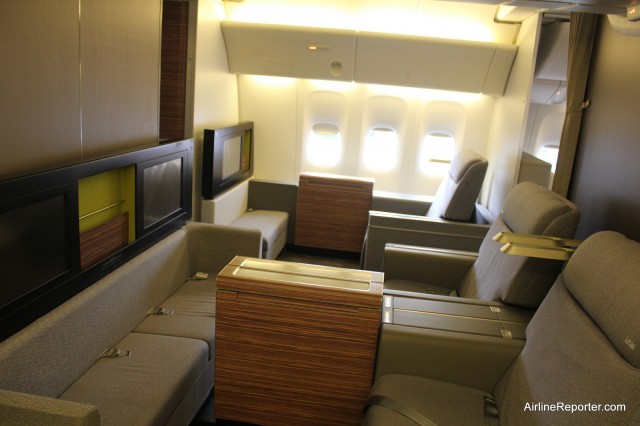 The immediate impression I had of TAM’s new First Class was it looked like I was standing in a living room – this is a good thing. The section is super-exclusive, with only four seats, and has a welcoming energy that is not found in many other First Class sections I have experienced.

It turns out that the homey feeling was no accident. “Our concept was to design a â€˜Home away from Homeâ€™, moving away from hard finishes and creating a softer, luxurious cabin more in keeping with high-end interior design,” Luke Hawes, director at Priestmangoode (who designed the new seats) and head of the TAM project explained. “The two central seats have a feature sofa that replaces standard footstools, offering a relaxed and comfortable social setting for passengers travelling together.” 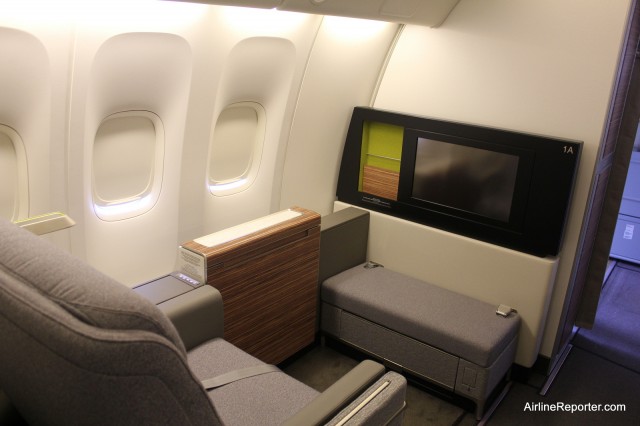 The new product is laid out in a 1-2-1 format, so each seat has aisle access. There are also dividers that can be put up to create privacy or you can keep them down, as shown, to easily work, connect, and talk with the person next to you. This is one of those products that I have to admit looks even better in person than it does in photos. Many other times I feel that photos make a product look better. 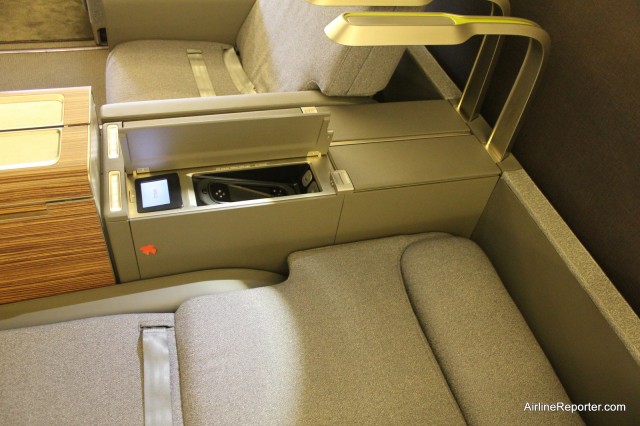 The First Class product as lots of fun gadgets to play with. Photo: David Parker Brown

On the 777, First Class passengers enjoy a vast array of amenities: 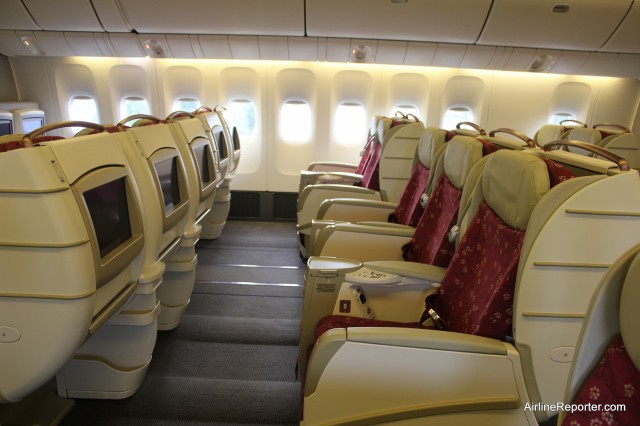 Although my main goal of the tour was to see TAM’s new First Class, I figured I should probably check out the rest of the plane.

The next section back is Business Class, which is arranged in a 2-3-2 layout, which unfortunately means that someone is still going to get a center seat in each row. I have not flown TAM’s version of the seat, but have flown it on other airlines and found it to still be competitive in the international long-haul market, although a bit dated.

The seats do not recline fully-flat, but it does go down to a respectable 170-degrees into a fixed shell. The seat also provides passengers with 63″ of seat pitch. 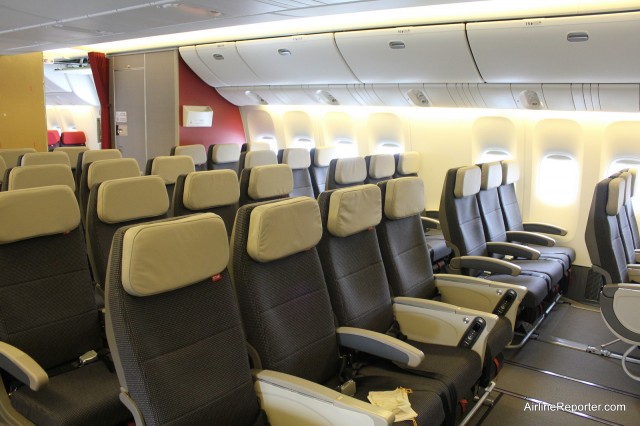 The next section back contain Space + seats, which are in a 3-4-3 configuration and give a little extra seat pitch versus the standard economy seat. The 10-abreast seats are a bit cramped, but 10 is becoming the new normal for most airlines on the 777.

Compared to the skittle-like red, blue, and green Economy Class seats farther back, the gray Space + were a bit drab. 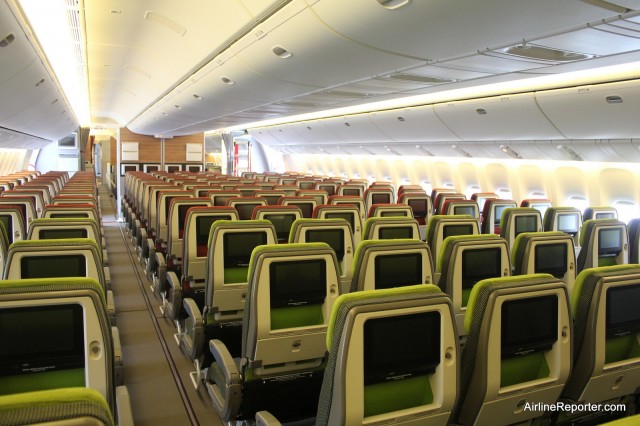 The seats in the back might have the least room for passengers, but no one can argue that they aren’t the most colorful.Â  TAM states that, “the colors reflect the warm, vibrant tones of South America and Brazil to create a relaxing, cozy environment especially geared to the benefit of the passenger.”

Although some passengers will care about the bright colors, more are likely to enjoy personal entertainment systems at each seat to help them pass the time during long-haul flights.

MORE EXTERIOR AND INTERIOR PHOTOS OF THE TAM BOEING 777-300ER

Nice tour!
About the red carpet, it was a tradition in TAM back to its golden years, the Rolim era and a little on. In every TAM flight, that would be a red carpet welcoming the passengers at the plane’s doors during the boarding. Also, the capitain would be at the main door welcoming he passengers (what ended after the crash of flight 3054). That was to reenforce the TAM’s ideal, that was to make each coustumer to feel special, and became a TAM’s “landmark”. Because of it, thy started painting the text “the magic red carpet” on the nose of the new fleet, when the frist A330s and A319s came, back in 1998, tough TAM’s livery was mostly blue. In 2002, with the arrival of the A320s, TAM changed its main colour to red, and the text was restricted to the widebody fleet. Even with TAM’s rebranding in 2008, the red carpet was still a mark for TAM, and the text was kept, but I’m not sure if the still have the red carpets. Unfortunately, with the LAN merger, these marks are likely to disapear.

That upholstery in Business Class looks like something my grandmother would have chosen for her “TV room” in the 1950s.

The rest of the interior is beautiful, however.

The setbacks in coach look state of the art with the tv and the tray table. I also saw a page on tam’s website about space plus and it gives the seat pitch for both space plus and economy. The space plus pitch i read for the 777 pictured in this article is at least 36″, particularly in the forward economy cabin, which i think is a good amount for a long flight and for tall people. If you want to run into roomy seats, the bulkheads and exit rows have about as much pitch as first and business class.

Forget the passenger section. It’s what’s up front that counts. Makes me misty eyed having been F/O for 2 years and captain for 14 years on the 75 and 76. 77 is practically the same layout. Nice to see a spanking nice new cockpit. Best jumpseats of any airplane that I’ve been in!!!! Then again the 2 pilot seats are great for the first year or so but after that……… 🙁 Mr Bill CA/767/JFK retired