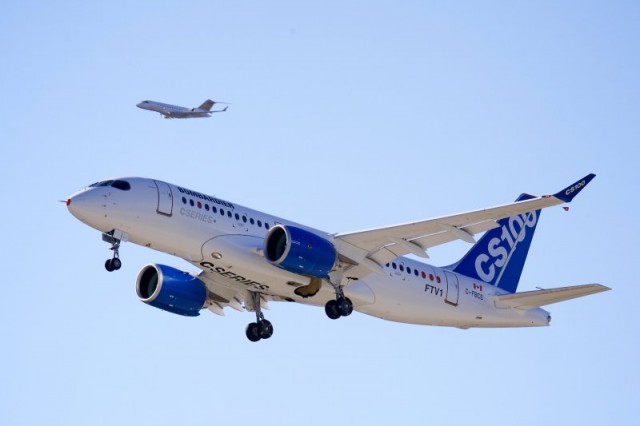 I’ve been writing about the CSeries for a while, and I was at Mirabel to cover this exciting event in Canadian aviation history for Airchive.com. Â I was really looking forward to not just seeing, but hearing the new tech PW1524G geared turbofans that power the CS100.

It was ironic, then, that FTV1 started rolling for takeoff while the loudspeakers in the viewing area were blaring with the commentary from the first flight webcast. Â I saw FTV1 take off, but didn’t hear anything. Had it been another single-aisle jet, I know I would have heard the engines over the sound system. FTV1, nope. It’s that quiet. 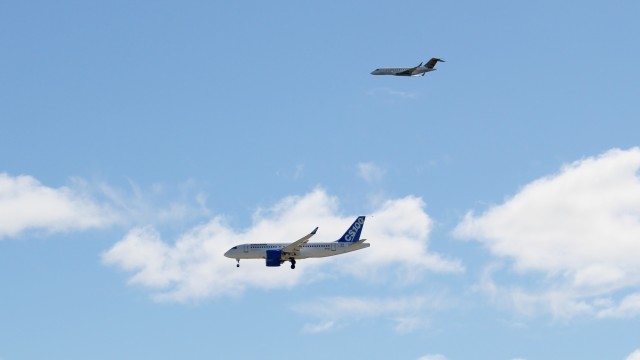 When FTV1 returned to YMX, the pilots flew a low approach over the runway, and again, the noise level was remarkably low. After a smooth landing, FTV1 taxied back to the apron and stopped right in front of the cheering crowd, and me. I tried to really listen. My perception? The CSeries is as quiet, if not quieter than a Q400 turboprop at a similar distance.

The quality of the sound is different, perhaps not surprising given that the PW1524Gs are fully cowled. The Q400 has two huge 6-bladed paddles spinning around, and the sound seems to be lower in pitch than the CSeries.Â In any event, Bombardier will be doing extensive performance testing of the CSeries during its 2,400 hour test flight program, and will no doubt determine the true sound level of the plane. 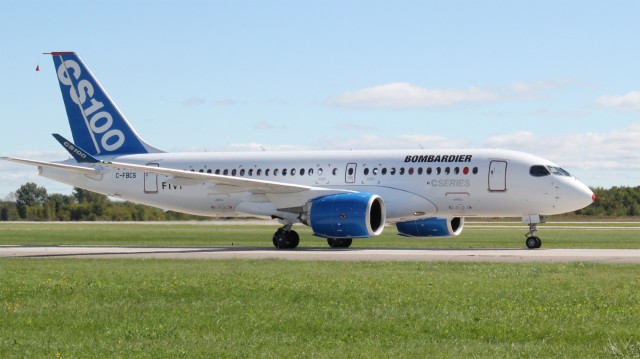 FTV1 stops to take a bow in front of the cheering crowds at YMX, after its successful first flight. Photo: Howard Slutsken / Airchive.com

So there it is. FTV1 was the first of two first flights this week, with the 787-9 almost ready to go. Do you think the CSeries will be the game-changer in the market as Bombardier hopes? What about the competition? Boeing, Airbus, Embraer and the other companies aren’t sitting still, and almost all of the “next gen” planes are going to be powered by the same engine as the CSeries, or GE’s comparable LEAP series. It’s going to make for interesting times!

Wonderful! What a great step forward for BBD!