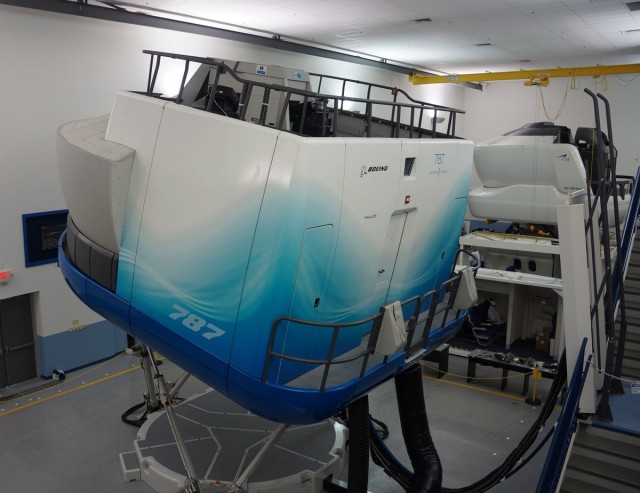 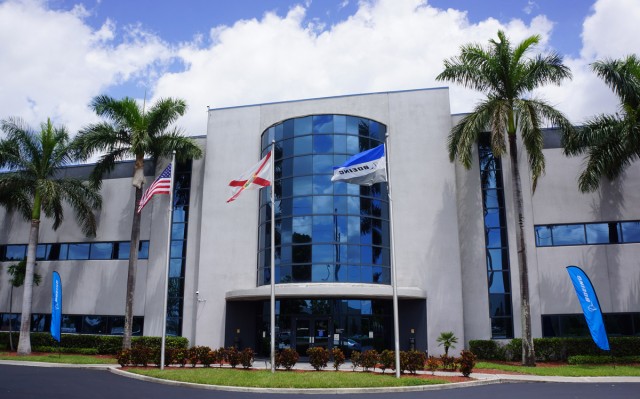 With the event, Boeing marked the launch of 787 customer training with new Dreamliner operators Aeromexico and LAN Airlines as the first two customers to train on the Thales 787 flight simulators at its $160 million Boeing Flight Services (BFS) campus. These simulators, along with and a handful of BFS staff, were relocated from Seattle. 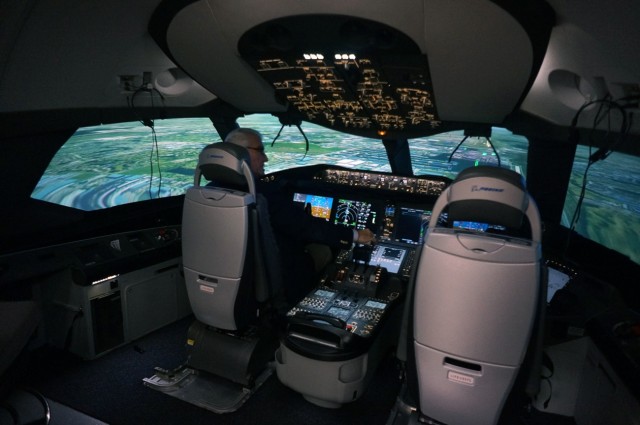 Boeing attributed the move to the fact that Miami is the hub of the Americas and is easy to reach for most of its customers from Europe, the Middle East, and Africa, making it more cost-effective and closer in terms of travel times then relatively-isolated Seattle. The Pacific Rim carriers can easily be handled via Boeing’s Asian campuses, as Miami doesn’t yet have direct links to Asia. It also doesn’t hurt that Miami has become a world-class business and tourism destination. 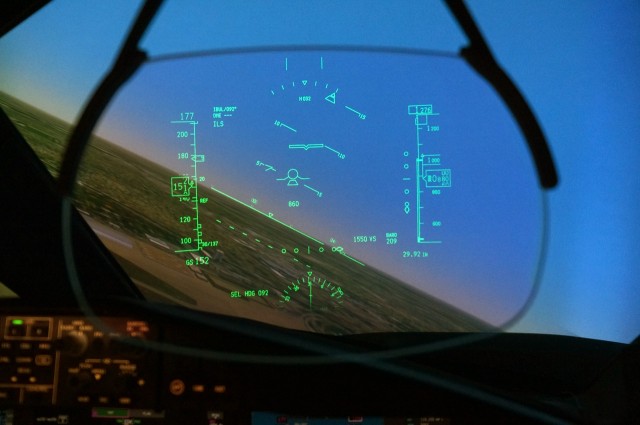 The Heads Up Display (HUD) on the 787 sim. Photo: Chris Sloan / Airchive.com

Of the international campus locations, including Shanghai, Singapore, and London, only London has more 787 simulators (with three). ’œMiami has always been an important Boeing training campus and the largest campus in our global network. Now it will also play an expanded role in training the pilots and technicians who will fly and maintain the groundbreaking 787 Dreamliner,’ said Carbary. Boeing also established Miami as its de-facto flight training campus for the Americas – the location where airline crews will receive the initial training provided to Boeing customers for new model airplane introductions.

The Miami campus is now the company’s largest commercial aviation training facility and is in fact one of the world’s very largest, if not the largest non-airline affiliated, independent commercial aviation OEM training facilities in terms of simulators alone. The campus isn’t limited to pilot training. Cabin staff and mechanic are trained here as well using teaching technologies such as tablets, eBooks, gaming technology, and even 3D simulated ’œwalk-arounds’ of aircraft. Boeing Flight Services trains 50,000 personnel at over 20 facilities worldwide per year, including 5,000 in Miami currently, with over 70% of those from outside the United States. 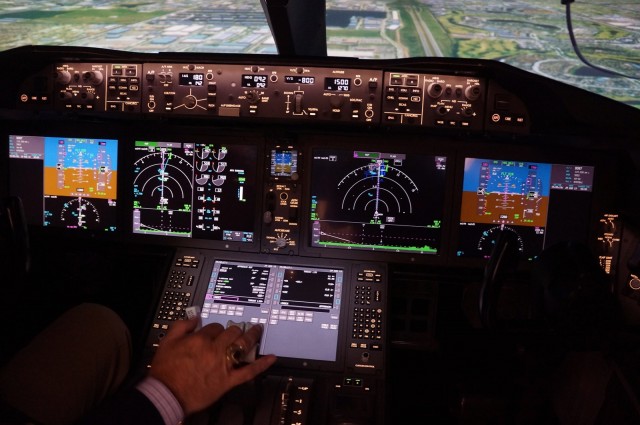 The extensively-covered launch event became a jobs rally led by Florida Governor Rick Scott, who is up for re-election in 2014, as well as a number of other local and state government officials and airline customers, almost overshadowing Boeing’s announcement of 100 jobs (including 25 training pilots) being created in Miami-Dade County. The pro-business Florida governor noted that Florida is the #2 state in aerospace jobs in North America. Scott then half-jokingly suggested ’œMoving Boeing’s corporate headquarters from cold and windy Chicago to Miami would be nice.’

Clearly playing to the local crowd, Scott went further by suggesting the Boeing should build aircraft in ’œpro-business, low regulation Florida.’ With Boeing’s corporate move to Chicago and second 787 assembly-line in Charleston, South Carolina still fresh ventures, these two ideas are unlikely to come to fruition. Boeing is making a $10 million annual contribution to the area’s economy, both directly and indirectly, including hotels, lodging, transportation, housing, etc. Boeing handed out a list of the many vendors it subcontracts out to and works with in Florida. 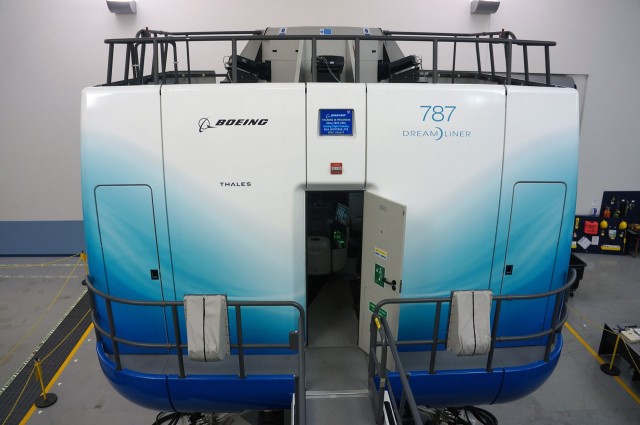 It is never too easy to say good bye to a flight simulator.  Photo: Chris Sloan / Airchive.com

Boeing also took the occasion to issue its industry-respected Pilot and Training Outlook forecast. Boeing projects that over the next 20 years, the industry will require 498,000 new commercial airline pilots and 556,000 new commercial airline maintenance technicians. ’œThe urgent demand for competent aviation personnel is a global issue that is here now and is very real,’ said Carbary. This is largely due to increased pilot demand in all regions (except Europe) driven by steadily increasing new airplane deliveries, airline expansion particularly internationally, and pilots reaching retirement age.

Boeing projects a global requirement for about 25,000 new pilots and 28,000 new technicians annually. However, the new aircraft will require fewer mechanics over time as aging planes are retired. New airplane technologies featuring more advanced components are likely to lead in some areas to lower maintenance requirements and lower technical demand. In terms of new personnel over the next 20 years, the Asia Pacific region (at 192,300 pilots and 215,300 techs) somewhat exceed Europe and North America combined. The Middle East and Latin America are identified as key growth areas as well. ’œThis is a global issues that can only be addressed by industry-wide innovation and solutions,’ added Carbary.

Boeing fired all of their experienced simulator instructors when it moved “sim city” from Seattle to Miami. All instruction in the Miami facility is being provided by temporary contract instructors.

boeing should have been put this cockpit on their B747-8….big miastakes

I’m not at all surprised the Boeing Commercial has consolidated their North American SIM training someplace and MIA is the no brainer choice. What does surprise me is that that did not retain one 787-8/9/10 ‘stimulator’ in Seattle **for their own** research and training purposes. Perhaps the logistics of supporting one machine do not outweigh the costs of camping so many folks in Miami on a regular basis. Mother Boeing knows best.

And now there is talk that they are unionizing with SPEEA soon. I wonder if all their jobs are in jeopardy. Maybe upper management is in trouble now.

Are you referring to the contract instructors unionizing or the simulator technicians?

Howdy! I simply would like to give a huge thumbs up for the good data you¡¦ve got right here on this post.

I will probably be coming again to your blog for extra soon.