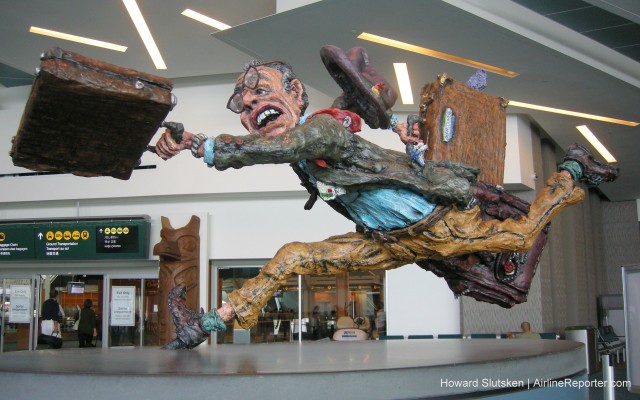 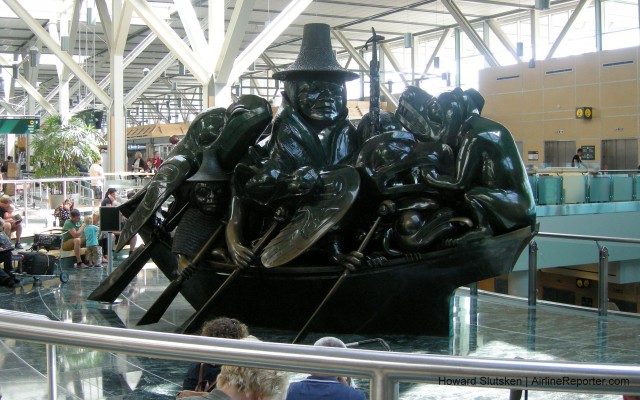 “The Spirit of Haida Gwaii: The Jade Canoe” by Bill Reid – international area

The collection includes many works by British Columbia’s “First Nations'” artists. In the U.S., the First Nations are known as “Native Americans”. The focal point for YVR’s collection is “The Spirit of Haida Gwaii: The Jade Canoe”, by Bill Reid. It’s a 6-meter long (19 ft) brass casting with a jade patina, and weighs over 4,900 kg (10,800 pounds).

“The Jade Canoe” is actually the second casting of the piece – the first is known as “The Black Canoe” and is on display at the Canadian Embassy in Washington, D.C.

Artwork is on display throughout the terminal, on both sides of security. Many works are located in the departure or arrival zones of the different areas, so only passengers in those areas get to see the pieces. But last week, Chris and Terry of YVR’s Communications Department gave me a tour and I was able to photograph many of the installations. 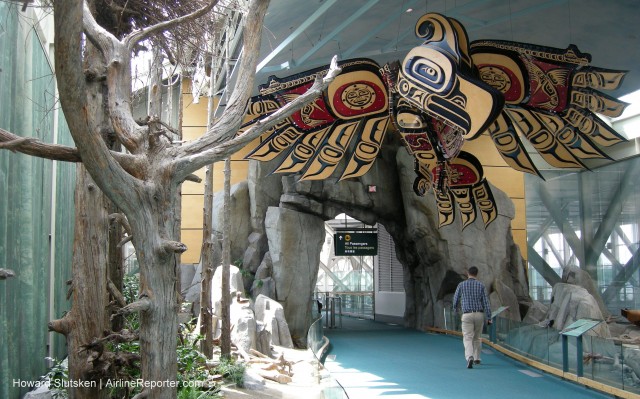 “Pacific Passage,” featuring the “Hetux” or Thunderbird. U.S. & international arrivals corridor, on the way to customs.

Arriving international passengers (including flights from the U.S.) are taken up above the departure gates and along window-lined corridors on their way to clearing customs and immigration. In one area, passengers enter a traditionally constructed post-and-beam longhouse doorway, in to the “Pacific Passage.” 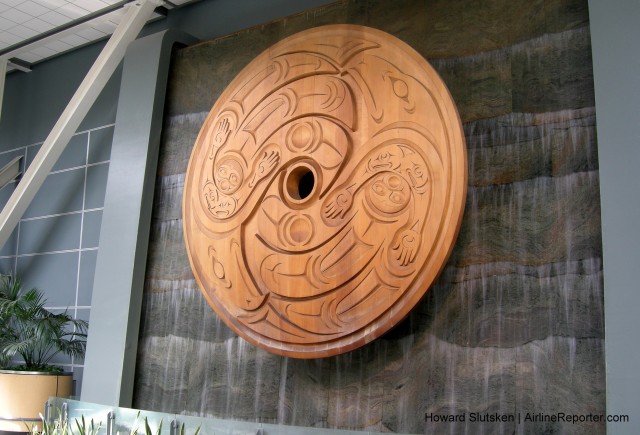 As passengers work their way towards the Customs Hall, they hear and see a waterfall. That’s part of a work called “Flight”, made of red cedar, by Susan A. Point. The whorl uses the traditional images of an eagle and a man with raised arms, welcoming visitors and also gesturing flight. 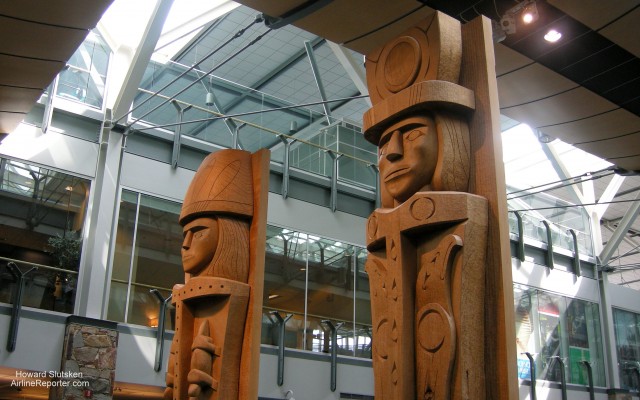 “Female & Male Welcome Figures” by Susan A. Point. In the Customs Hall.

Coming down the escalators into the Customs Hall, passengers are greeted by the “Female and Male Welcome Figures”, carved in red cedar, also by Susan A. Point. These figures exhibit the traditional carving style of the Coast Salish people. 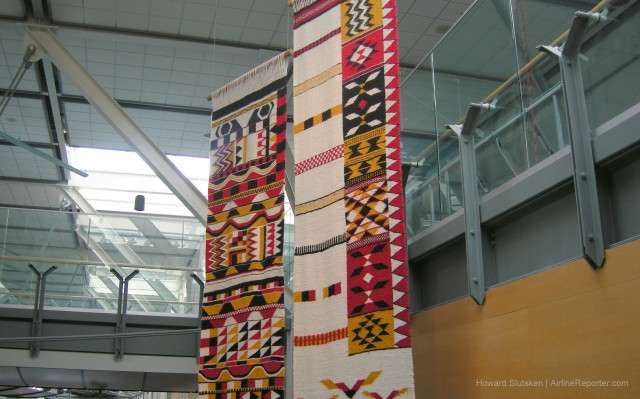 “Out of the Silence” – Musqueam Nation Weavings. Above the Customs Hall.

And if they look up, passengers will see beautiful Musqueam weavings hanging above the Customs Hall. The weavings are called “Out of the Silence” and reflect the beauty, integrity, and warmth on which the Musqueam people have built their traditions. 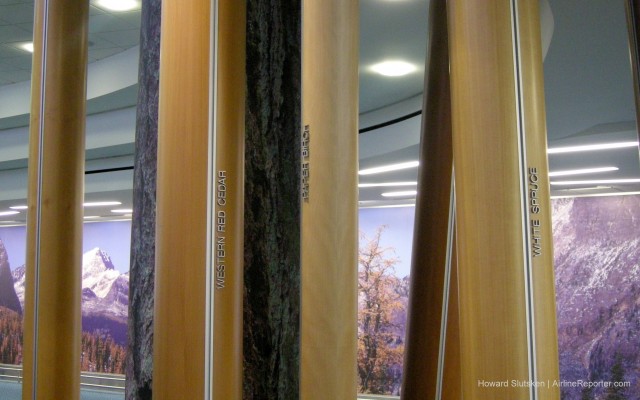 As passengers leave the customs area, they’re treated to something a little different. YVR has put in a display showcasing the kinds of trees found in British Columbia, each stripped of its bark and labelled. 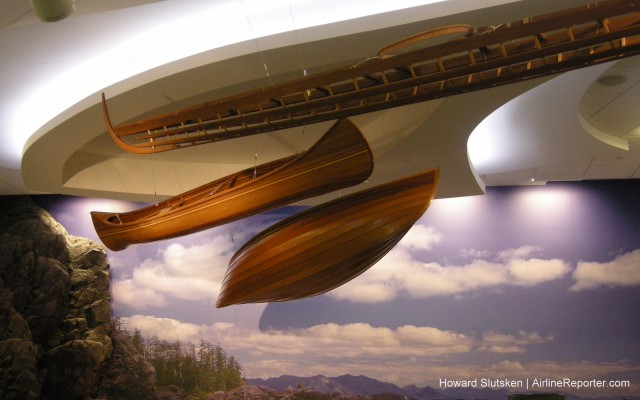 “Flying Canoes” in the wilderness.  Just outside the Customs Hall.

And just past the timber, wooden canoes are hung from the ceiling in front of photo-mural of BC’s wilderness. Unfortunately, most arriving passengers don’t notice these displays – they’re relieved that they’ve made it through customs, and they’re looking forward to being greeted by friends and family. 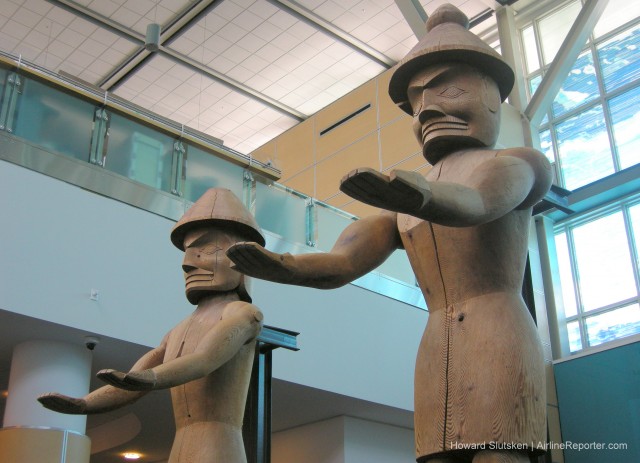 As passengers enter the public international arrivals area, they’re greeted by another iconic YVR work: “The Welcome Figures.”  The two figures, one male, one female, were carved in yellow cedar by Nuu-chah-nulth artist Joe David.

They originally stood at the entrance of the British Columbia pavilion during Expo ’86 in Vancouver. Carved in the Clayoquot tradition, figures such as these would be temporarily positioned, with arms raised, on the beach in front of the village, to welcome guests to special events. Welcome to Vancouver! 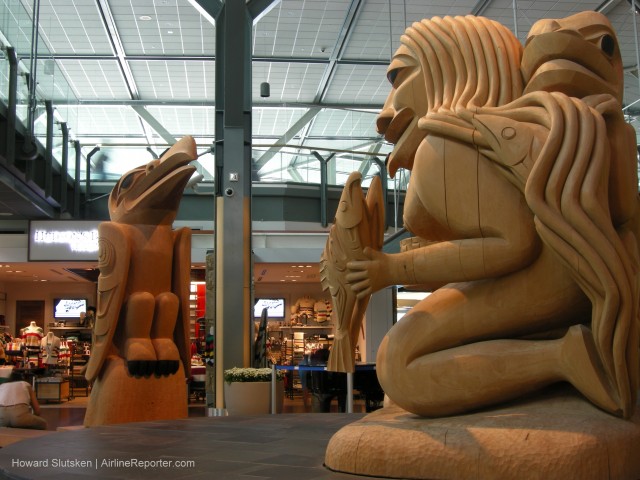 “The Story of Fog Woman and Raven” by Dempsey Bob. International departure gates.

Departing international passengers have to work their way through security and the ubiquitous duty-free shopping area before reaching their gates. After finishing their shopping, they’ll see “The Story of Fog Woman and Raven”, by Tahltan and Tlingit First Nations artist Dempsey Bob. This work, made from laminated yellow cedar, red cedar, paint, and stone, depicts the legend that brings salmon to the streams every year. 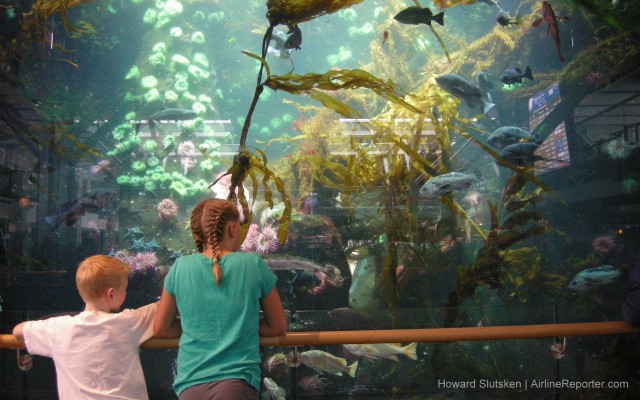 YVR doesn’t just have great art. In the middle of the international departure gates is a huge aquarium! This 114,000 litre (30,000 gallon) tank holds over 5,000 sea creatures, including sea stars, wolf eels, kelp, corals, sea urchins, sea stars, 21 different kinds of fish, and a whole bunch of anemones. The aquarium is monitored and managed by Vancouver Aquarium staff. It’s a rich collection of marine life native to British Columbia. 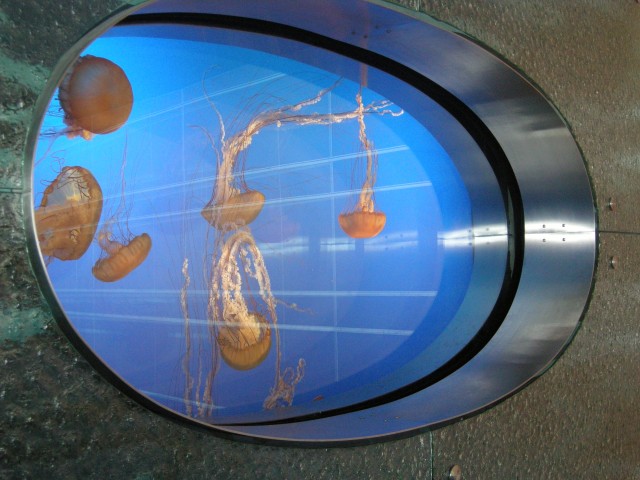 Passengers arriving in this zone of international gates enjoy their own aquarium, in the corridor leading to customs. It’s much smaller at only 1,800 litres (475 gallons) and is home to twelve Pacific Sea Nettle jellies that were raised at the Vancouver Aquarium by its resident “Jelly” expert. Heck of a title for a business card. 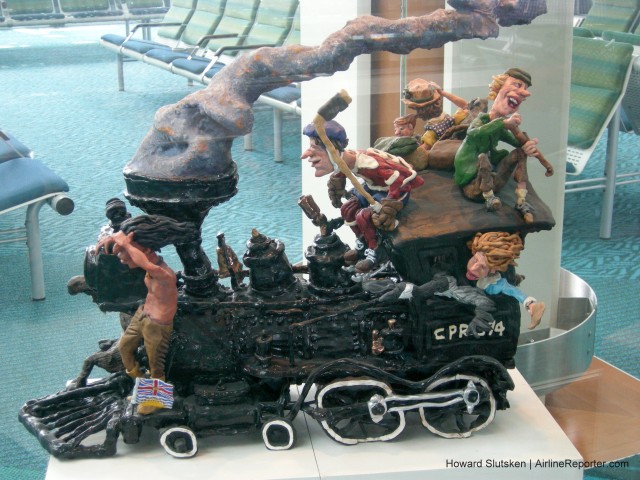 There are works scattered all over the airport in display cases and, in fact, the collection is so extensive that the displays are changed regularly. I particularly liked the above piece by Patrick Amiot and Brigitte Laurent, called “The Great Canadian Train.” If you look carefully, you can see that a Canada Goose is driving the engine. Watch out, Captain Sully!

Augmenting YVR’s collection, the YVR Art Foundation provides scholarships and awards to young BC First Nations artists. The foundation has awarded over $200,000 to more than 40 artists of woodworking, weaving, jewelry design, and printmaking. Winning projects go on display in the airport for a year.

YVR is also the home of the Lorne Balshine Inuit Art Collection, made up of 75 contemporary Inuit sculptures. This collection is on exhibition just past “B” pier security in the domestic area. 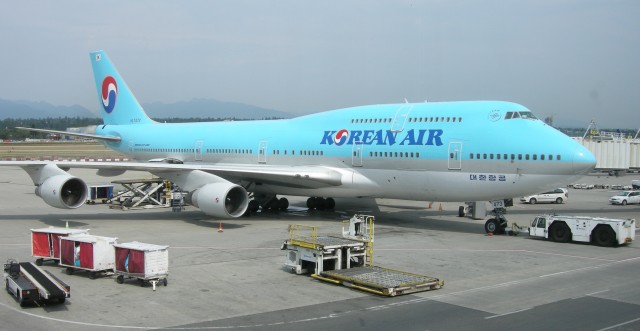 And in case you’re thinking that I wasn’t really at YVR, here’s a shot I took of a Korean Air 747-400, part of the mid-day trans-Pacific “push” at YVR. I’m sure you’ll agree that the 747 is most certainly a work of art.

If you’d like to look at more of my YVR artwork photos, you can find them HERE.

So next time you find yourself at any airport, have a good look around. You might be surprised by what you see. And if you happen to be visiting Vancouver or just connecting through YVR, make sure you take some time to enjoy all this great airport has to offer.

Being from PDX, I have my biases, but I sincerely do love YVR. My wife and I flew through it in 2011 on our way to YYJ for our honeymoon, so there is a special fondness for British Columbia and YVR…nice article!

YVR…wasn’t this one of the airports mentioned on an episode of Corner Gas? That’s the one episode every AvGeek should watch! Oh, yeah, great story and nice photos!

Thanks for the comments, Mike & Corey.

Mike, was that the Christmas episode where Lacey drives to YEG when YYC is closed by bad weather, and tries to get to YYZ via YVR? 🙂
Not that I watched the show, or anything…

Indeed it was…I’m laughing just at the thought of it; then again, I’m easily amused!

BTW, I noticed one thing missing from your terminal art photos: a real airplane. Does YVR not have a stuffed bird or two hanging from the ceiling? That would make it a complete collection, IMHO.

BEST AIRPORT IN THE WORLD!!

And, light rail can take you swiftly from the airport to Downtown .. ..

For the first time ever, I was not in any hurry to leave an airport after arriving and just stretched out, ate, enjoyed the shopping and OBSERVATION DECK and left when I had to .. ..

And, my family of three agreed > Even sent our postcards from the airport before we left!!!

Thanks, Sam – I happen to agree!
And IMHO, the Fairmont Airport Vancouver at YVR is one of the best airport hotels in the world.
But THAT’s for another story!

Thank you! You did a great job!