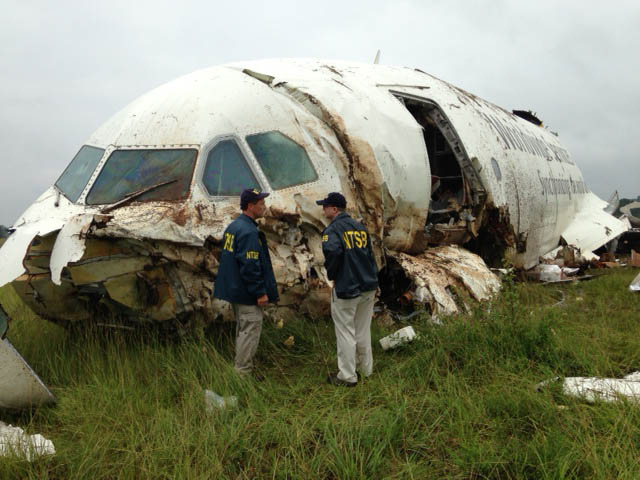 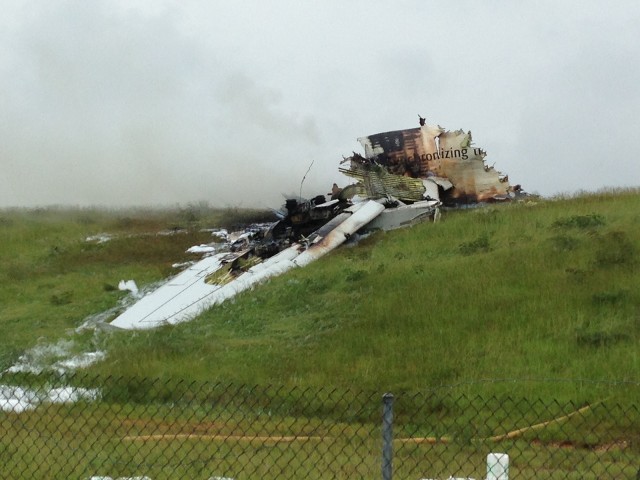 Airbus has stated that the plane in question (MSN841) was delivered to UPS in 2003 and had about 11,000 flight hours (over 6,800 flights) at the time of the crash. They also state that they will, “provide full technical assistance to the French BEA as well as to the authorities who will be responsible for the accident investigation. A team of specialists from Airbus is being dispatched to Alabama.” 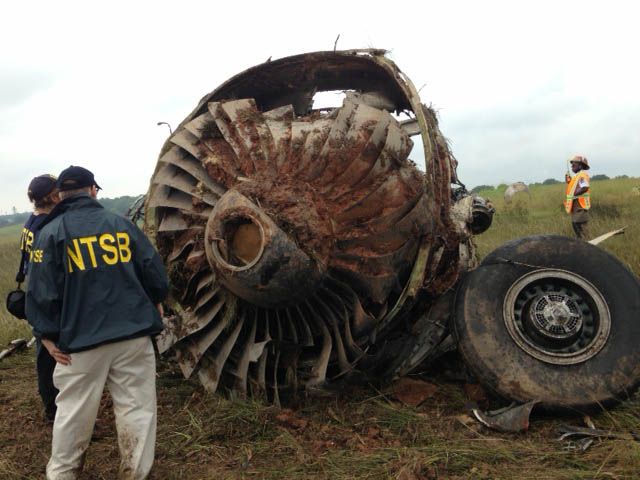 One of the Pratt and Whitney engines of the UPS Airbus A300. Image: NTSB / Flickr CC.

In a press release, UPS Airlines President Mitch Nichols stated, “This incident is very unfortunate, and our thoughts and prayers are with those involved.  We place the utmost value on the safety of our employees, our customers and the public. We will immediately engage with the National Transportation Safety Board’s investigation, and we will work exhaustively on response efforts.” 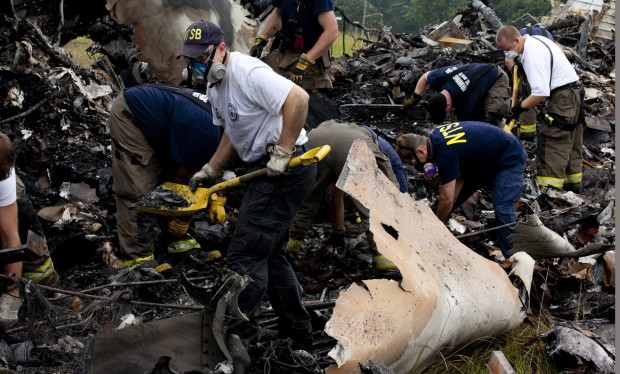 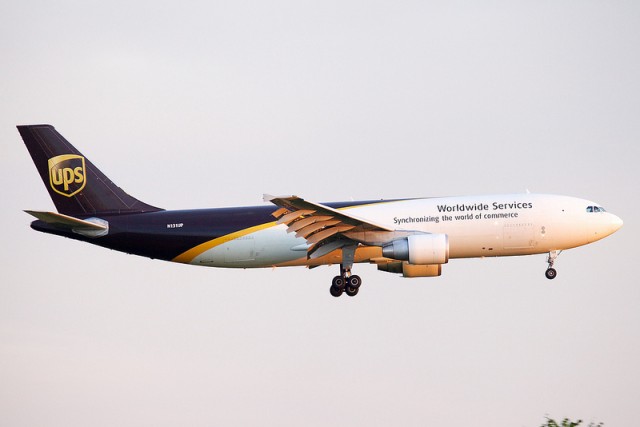 An Airbus A300-600F, similar to the one that crashed earlier today. Image: Patrick Cardinal / Flickr CC.

The NTSB held a press conference a bit before 5:30pm EST and gave additional details about the crash. 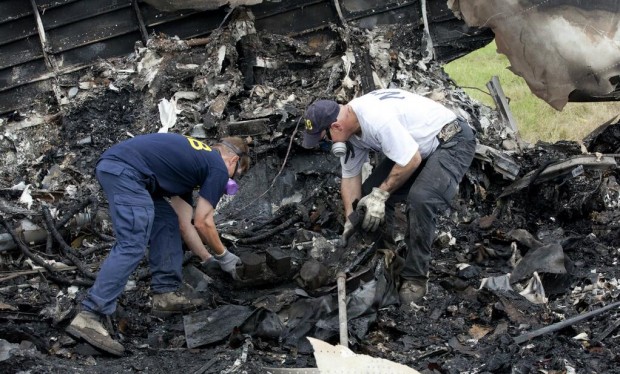 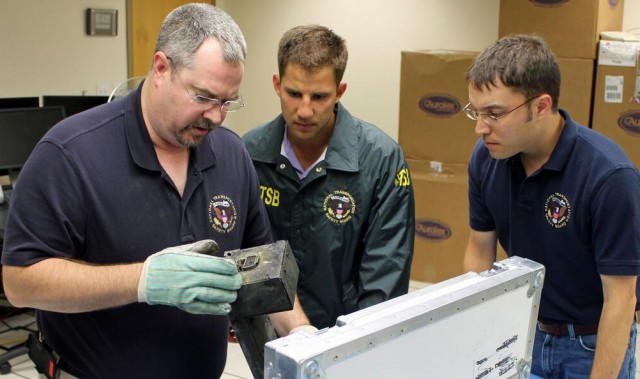 Investigators conducting initial examination of one of the recorders from UPS flight 1354 in the NTSB laboratory. Image: NTSB.

https://www.airlinereporter.com
YVR – Vancouver’s Award-Winning Airport, Art Gallery and… Aquarium
From Buying a Ticket to Walking on a British Airways 747
16 Comments

Think you have the wrong Birmingham. It was BHM.

This was in US as Adam said, not BHX (England)!!

Does anyone know if an A300-600F is a glass cockpit / fly-by-wire aircraft? I used to fly into BHM frequently as a Capt for part 121 carrier flying A320 aircraft and recall that there is rising terrain north of the runway 18 at BHM and used to only have a non precision approach to that rwy. Also, as I recall, the VOR is not on the airport property. It used to be several miles from the airport center. A low vis; non-precision approach in IMC conditions at 5AM could be a challenge in a dark flight deck and non-glass airplane.

A300/600 is a glass cockpit aircraft with conventional flight controls.What is questionable is why try a landing on a 2164 m runway with a wide body aircraft when runway 24/06 is 3658m long with an ILS approach. Fatigue?!!!!
May God rest there souls and safe flights to all the rest of us.

First, thank you for the information about the crash. My prayers to the families of the crew who lost their lives. May God help them to be patient and all of us. Amen. I hope the crash was not because too slow too low otherwise, this shows us that people do not learn from each other.

OA pilot-an article stated that the longer runway was closed for maintenance. It was their only option

This make me wonder about proficiency? How often do the airlines shoot approaches without the aid of glide slope? I guess there’s also the optical illusion thing. One of our guys crash landed an MU2 in the snow next to the runways due to strange lighting. You almost want it to be a mechanic failure. The thought of professional pilots flying two good airplanes right into the ground (SFO) sucks. I guess the NTSB will figure it all out in time. I’m so sorry for their families and friends.

Fatigue a big factor. Also tower in many places is closed due to low traffic volume early in the morning. It is said the visibility was 10 miles. In my experience published weather is very stale this time of the day, official weather and what you really encounter are two quite different things. You wouldn’t like the pilot seat if you knew you can get prosecuted by FAA after landing in clear weather, while the official weather still in effect hours after the last observation was made, was not the actual weather. That is a generality, and probably doesn’t apply here, but what does apply is fatigue.

Why different crew rest rules for box haulers? Who is really making the rules, FAA, or really the operators? Fatigue will explain the 20 degree misalignment, and the aircraft being low. Are the UPS pilots under pressure to 1. salvage bad approaches? 2. go a little lower to take a peek.

Someone else may have made the main point, was the altimeter setting correct? If not, go again to the topic of fatigue.

You should read into the information, The reason they were landing on that runway is that the other runway was notam closed for runway centerline lighting maintenance.

A300 has Flight Path vector mode to assist on visual approach..also when all else fails..you can build an approach in the FMS..prayers for all involved

Another question comes to me: what about pilots getting blind by laser spots from the ground ? In Europe, many safety warnings have been issued concerning this serious topic (and stupid/criminal behaviour).
Did anyone hear about such lasers around BHM ?

A point interest is according to another report I read they had a very rapid descent rate of an average of 3450 FPM for the two minutes prior to the approach.

I haven’t flown since the early 80’s and was never in heavies but even for a light aircraft that’s a huge sink rate. Is that normal for an aircraft like an A300?

We’ve enjoyment together with, lead to I came across precisely what I had been seeking. You’ve got ended my personal 4 working day extensive search for! The lord Many thanks guy. Possess a terrific day. Ok bye