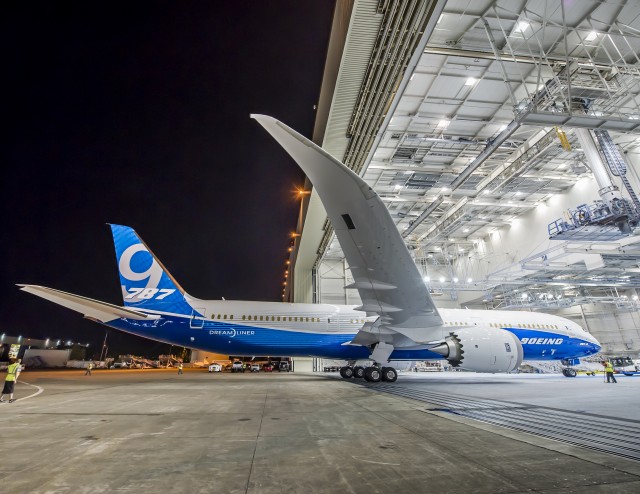 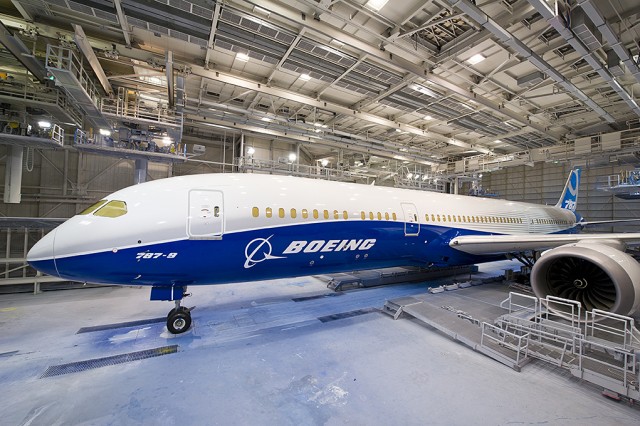 The first Boeing 787-9 in full Dreamliner livery. Photo from Boeing.

I took a quick trip over to Paine Field to try and spot the first 787-9, but it appears that soon after Boeing first rolled it out of the paint hangar, they rolled it into another hanger, likely for a special employee event.

Boeing is expecting the 787-9 will take first flight in late summer and then Air New Zealand will take the first delivery by mid-2014 in one of two of ailine’s new liveries. 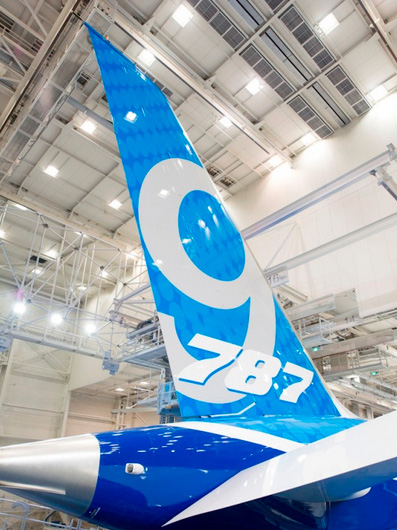 Detail of the tail on Boeing’s new livery. Image from Boeing.

https://www.airlinereporter.com
How I Flew Round-Trip To Florida on JetBlue For Only $1.99
Could this Be the Last Boeing 777-200ER Ever Built?
8 Comments

Finally, the journey from July 7, 2007 has made a full circle to the -9. This should be called “The Lessons Learned” -9, but a more distinguished Name should be the “Indomitable Spirit” of Boeing. After the Lewis and Clark story from the “Corps of Discovery” journals crossing the wilderness to the Pacific Ocean not far from Paine Field in Everett. In fact its about a 175 miles to the south from Paine field. I would recommend naming this Aircraft The Indomitable Spirit. However, Ambrose’s Book title on Lewis and Clark, “Undaunted Courage” better represents this aircraft. It represents every effort and every skill learned on the trail to the -9! The 787-8 paved the way with a high price of lesson’s learned. This aircraft will be the validation of that spirit and “Undaunted Courage”, that Stephen Ambrose wrote about in his book with the same title.

Given the fact that every carrier flying 787’s has had multiple incidents of electrical fires I would suggest in withholding celebrations until the plane shows a track record of reliability. Exploding ovens on Air India. Qatar Airways grounding dreamliners and negotiating a $200 million reimbursement from Boeing. The only celebration is happening at Airbus right now. Boeing should seriously consider massive firings of any engineer involved in this massive disaster.

“every carrier flying 787″²s has had multiple incidents of electrical fires”?
Actually the 787 has experienced just two “fires”: one on a parked JAL 787 (Li-ion battery related); the other, on a parked Ethiopian Airlines 787, was apparently caused by the plane’s emergency locator beacon, which is powered by a Li-Mn battery
“the plane shows no track record of reliability”?
787 dispatch reliability is currently 98.7%, good even for a “proven” commercial airliner
“exploding ovens on Air India”?
it was an overheated (not exploding) oven, almost certainly caused by cabin crew carelessness
“The only celebration is happening at Airbus right now”
Airbus will have their own problems with their new A350, plenty of them. Airbus knows it, which is why they’ve remained mute on the 787’s teething issues
Boeing should seriously consider massive firings of any engineer involved in this massive disaster.
What is it you propose, Mr Jay F ..firing the entire 787 engineering team? You don’t seem to be a serious commentator

lol @michael, if you think airlines gonna speak out about all B787-8 problems, you’re really mistaken. Do you think Airlines gonna scare their passengers and said “hey the B787 that we operate got a problems, so hop on board and enjoy the flight”. All airlines gonna keep their mouth shut cause they wouldn’t want to get reputation of airlines that operate problematic aircraft. Then all of them gonna ask for reimbursement from Boeing. Qatar grounding some of their aircraft in June because of certain reasons that they don’t want to tell the public of, even from that statement we could see something fishy going on between boeing and Qatar airways. The different between Boeing and Airbus is that Boeing like to talk shit all the time compared to Airbus, instead of making fun of the competitors, Airbus like to proved to others if they can do better. And who the hell think you are telling others that A350 gonna get into trouble when it’s enter to the service, you can’t see into the future, and you ignore everything that happen to B787 and said A350 gonna be suck. That is exactly what Boeing have done since the day Airbus come to the market, arrogant company for arrogant people!

Rather than call it a new Boeing livery, let’s call it what it is: Boeing painting the 787 in faux-United livery as a thank you for being the US launch customer.

I am going to have to disagree a bit. United has stated that they choose their livery based on the original Dreamliner livery. I think both look quite good.

it would seem to me that the problems with the 787 are more from the sublets than the actual aircraft. I think Boeing and we the enthusiast got comfortable with the products and this was a gentle wake up call. The plane is a good and I agree does need to prove itself before we begin celebrating.