This story was written by Chris Sloan and originally was published on Airchive.com. This is the next of a multi-part series talking about the Boeing 737 factory in Renton. Read the first part: A Historical Look at Boeing’s 737 Factory in Renton.

In 1988, the first serious competitor to the 737 monopoly, the Airbus A320 entered service. With even more advanced systems like fly-by-wire flight controls, new higher powered and fuel efficient engines, a wider cabin, the first major use of composite materials in a narrow body airliner, and somewhat larger capacity on a direct model comparison basis, the A320 family quickly became a force to be reckoned with. In addition, Airbus offered aggressive pricing and quicker delivery windows. Having only recently launched the 2nd generation 737s, Boeing didn’t respond to the European framer’s challenge for another 5 years.

In 1993, Boeing finally answered with the Boeing 737 Next Generation. First flying in 1997, it first entered service in 1998 as a 737-700 (comparable in size to the 737-300) for launch customer Southwest. While retaining commonality with the 2nd generation 737s, the NextGens included a redesigned wing, and eventually winglets, that increased total fuel capacity by 30% and range to over 3,000 miles. Quieter, more powerful and more fuel-efficient engines in the form of CFM56-7Bs came online as well. 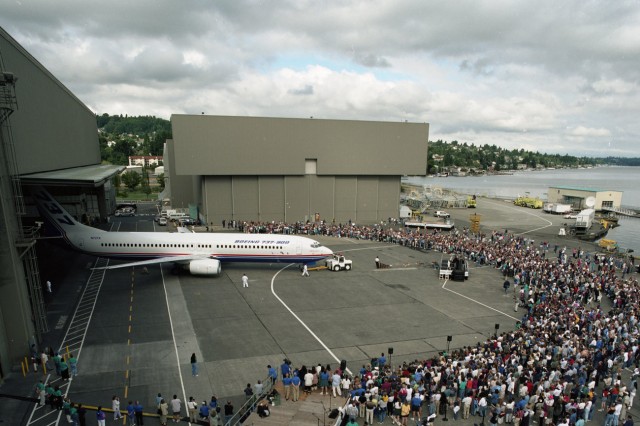 The flight deck was further upgraded with new avionics. The NG’s upgraded passenger cabin was inspired by the then new 777 with bigger overhead bins and more curved surfaces. Airlines ordered 724 of the Next-Generation 737 models between the Next-Generation program launch Nov. 17, 1993, and the day the first airplane was delivered on Dec. 12, 1997.

The family quickly expanded on the low-end to the 737-600 to the high-end -700, -800, and eventually the -900. These new models allowed the 737 to perform missions once thought unthinkable for an airliner of its size such as trans-oceanic and trans-continental services. When the 737 was stretched to the -900 in 2000, the 737 effectively again hastened the demise of another Boeing brethren, the 757. 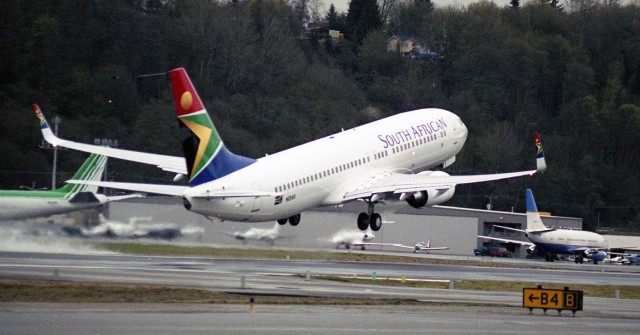 The first Boeing Next-Generation 737 with production-installed winglets in a joint venture with Aviation Partners, rolled out of the paint hangar in Seattle on March 25, 2001 and first flew shorty thereafter. Image courtesy: Boeing

With a perfect storm of the global bullish economic era of the mid-to-late 1990s and the emergence of low cost carriers such around the world such as WestJet, EasyJet and RyanAir, sales of the 737 NextGen order book absolutely exploded. In 2004, The 1,500th Next-Generation 737 was delivered to ATA Airlines.

The Next-Generation 737 family reached this milestone delivery in less time than any other commercial airplane family, six years after the delivery of the first model. The Next-Generation 737 bested the previous record holder, the Classic 737 series, by four years. Where it took 26 years to reach 2,500 737 total deliveries. It only took another 13 years to reach 5,000 deliveries ’“ a Southwest 737-700 in 2006. 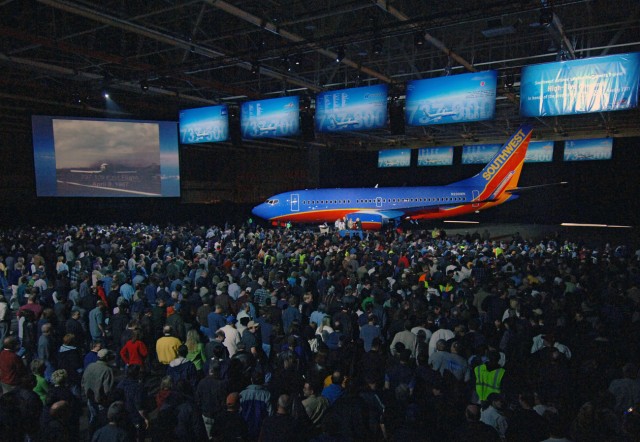 At this point, the Guinness World Records acknowledged the 737 as the most-produced large commercial jet airplane in aviation history. It was just shy of 15 years between the first Next-Generation 737 order and the 5,000th order. Again, the Next Generation 737 reached this order milestone more quickly than any other commercial jet in history. The milestones continued to pile on. 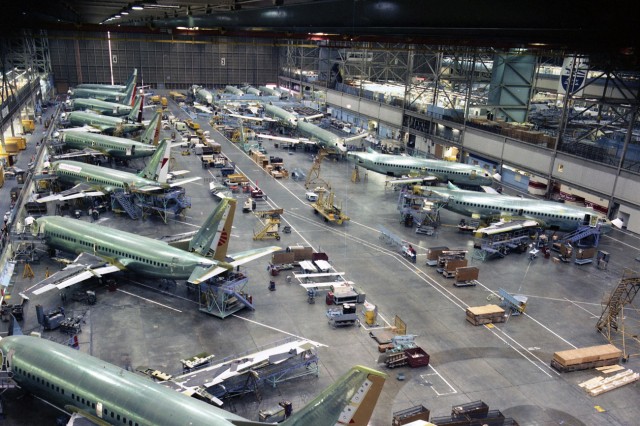 Though this unprecedented success was a boon to sales and marketing’s bulging order book, it was an absolute bust to manufacturing. The orders were coming in fast and furious but the suppliers and sub-contractors couldn’t keep up. On top of that, there were the issues of co-building the NextGen and Classic together. 1960s production flow techniques were being used to build state-of-the art aircraft.

This meltdown culminated into an embarrassing and costly stoppage to the 737 line in 1997. Labor relations were still somewhat sour following a 1995 strike that didn’t help the situation. ’œWe bit off more then we could chew’, admitted Randy Tinseth VP/ Marketing, Boeing Commercial Airplane.

Clearly something had to be done. 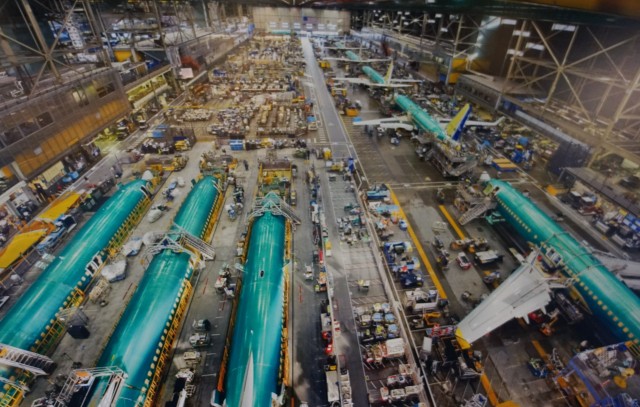 The 737 moving line was introduced in 2002. Image courtesy: Boeing

Boeing considered a number of things including closing Renton and moving 737 production to the large, and largely soon to be unused former 717 factory at Long Beach, California that Boeing had acquired in the 1997 merger with McDonnell Douglas. While Airbus expanded its production footprint for the A320s with factories in Hamburg, Germany and China, real-estate swollen Boeing following the MDC merger began to shrink Renton selling off 65 acres.

This land became apartments and a shopping mall that now hem in the complex. The Renton complex retained about 145 acres. This decision would come back to haunt the company a few years later, but also spurred it to be much more innovative and efficient in assembling jetliners. In spite of the most optimistic of marketing predictions at the time, no one could foresee how profound these decisions would be just a few years down the road. 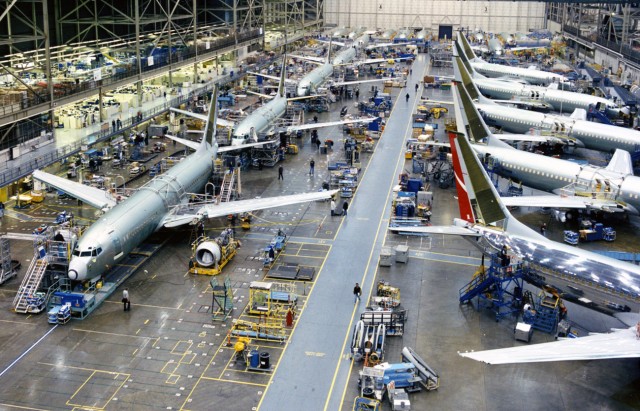 The moving assembly line at Renton at the time of its opening in 2002 appears left-of-frame. The original static assembly line on the right side of the frame provides a fascinating contrast. Image Courtesy: Boeing

Carolyn Corvi, then VP/GM of the 737/757 Programs led ground-breaking initiatives which reinvented the assembly process not only for the 737, but Boeing as a whole. Under Corvi’s leadership, the 737/757 Programs incorporated industry-leading applications of lean manufacturing principles.

Erik Nelson, the Director of 737 Manufacturing describes Lean+ as ’œBoeing’s one overarching continuous improvement approach centered around a five-step continuous improvement process that integrates various techniques and tools, which we call Elements. It provides a common language, tools, principles and training so we can improve productivity, and make our amazing products and services better tomorrow than we do today ’“ and better than our competitors ever could.’ 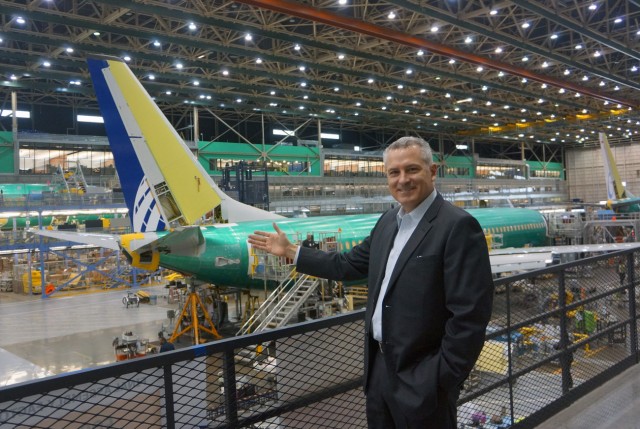 In January 2002, Boeing introduced a moving assembly line that reduced 737 final assembly flow time from 22 days in 1999 to 11 days in 2005. This is quite a feat considering each 737 uses 394,000 unique parts and 42 miles of wiring. Erik Nelson points out ’œProduction of an airframe officially beings at the spar load. From spar load to delivery takes about 2 ½ months, a process which used to take a year.’

The 737 moving line was inspired by a visit to Toyota as well as commercial aviation’s first moving line, the Boeing 717 (MD-95). It has since inspired the 767 and 777’s moving line and the 787’s pulsing line. Once the Boeing 757 production ended, The 737 took over the 2nd line at the Renton Factory in December 2005. Airbus didn’t introduce their moving line until 2004. 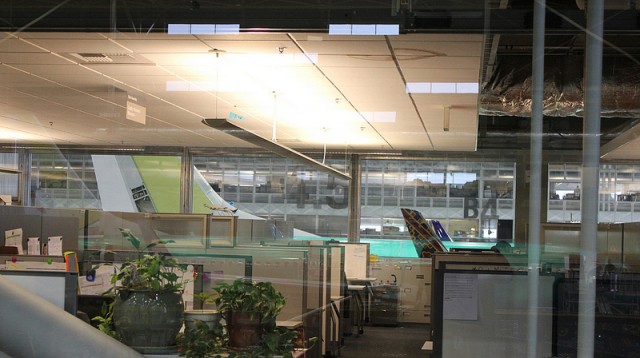 Office with a view. Boeing workers were moved into the 737 facility. Photo by David Parker Brown / AirlineReporter.com.

Corvi also was responsible for the ’œMove to the Lake’ project, which co-located most of the people who design, build and support the 737 inside the Renton Final Assembly building on the south shore of Lake Washington. In 2004, 2,500 support employees from finance, engineering, tooling, and materials management to the Renton Final Assembly Building consolidating most involved with the program into 1 location.

Area where parts were previously stored were converted into office space in three towers. This was designed to support the flow of the product ’“ the support staff in the factory delivers drawings, financial date, build plans, and parts list to the factory floor similar to the way parts and tools are delivered. With just-in-time parts delivery, excessive storage space is needed. As an added touch, the towers correspond to the earth’s hemispheres while the conference rooms are named after cities served by the 737.

Additional stories on the Boeing 737 Renton Factory will be coming to AirlineReporter.com soon.

Special thanks to: Boeing’s Doug Alder, Jr; Michael Lombardi, and Erik Nelson for their invaluable time, expertise, and assistance in the writing of this post.

Hi,I log on to your blogs named “Inside Boeing”s 737 Renton Factory and the Successful Next Gen – AirlineReporter : AirlineReporter” like every week.Your story-telling style is witty, keep doing what you’re doing! And you can look our website about proxy list.