A Close up look at the new Scimitar Winglet – Photo: United Airlines

On Tuesday the 16th July 2013, a new type of winglet took to the skies for the first time.  Forget about the blended winglet or even the sharklet, the new kid in town is the Scimitar Winglet.  This new winglet is similar to the Advance Technology Winglet that is destined for Boeing’s new 737 Max aircraft, but is built for the 737NG instead.

The first flight was operated by a United 737-800 (aircraft N37277) and was conducted at Paine Field (KPAE) in Everett. Many of the test flights out of KPAE are operated by Boeing at the north-end of the airport, but this flight was completed at the south-end via Aviation Partners Boeing where the aircraft was retrofitted with the new Scimitar Winglet. 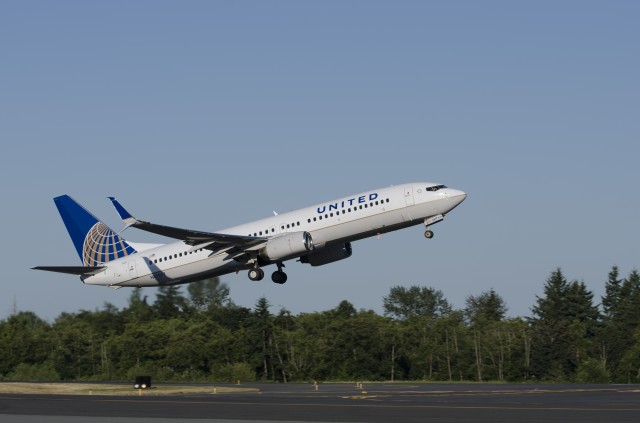 This January, United Airlines placed an order to retrofit their 737-800 aircraft with the Scimitar Winglet. Then last month, they extended it to cover their existing (and new) 737-900ER aircraft as well.

“We are always looking for opportunities to reduce fuel expense by improving the efficiency of our fleet. The Next-Generation 737 Split Scimitar Winglet will provide a natural hedge against rising fuel prices while simultaneously reducing carbon emissions,” said United’s Vice President of Fleet Ron Baur.

The first order of Scimitar Winglets to be retrofitted to a Boeing 737 Aircraft comes from United – Image: Aviation Partners Boeing

By fitting the new Scimitar Winglets to a 737-900ER, Aviation Partners Boeing expects the aircraft to be able to increase range by approximately 60 nm.  It may not sound like much but from an airline’s perspective, every little bit counts.  Not just range will be extended but the aircraft should also be able to carry an additional 3,300lb [that’s a lot of extra bag fees].

The biggest savings will be to the fuel tanks. A whopping 57,000 gallons of jet fuel can be saved for every aircraft, fitted with a Scimitar Winglet, each year.  That is same as over 2190 tanks of gas for a Dodge Ram 1500.

Considering that United has over 76 of these aircraft currently flying (with 4 more on order), you can see just why this makes sense for them.

The new Advance Technology Winglet that will go on the Boeing 737 MAX. Image by David Parker Brown.

’œUnited Airlines continues to lead the way in adapting its fleet to be as fuel efficient and eco-friendly as possible,’ said Aviation Partners Boeing executive vice president and chief commercial officer Patrick LaMoria. ’œUnited’s relentless drive to improve fuel efficiency is the perfect complement to APB’s focus on continuous innovation.We are once again very excited to launch another new program with United.’

After further testing, other 737NG aircraft (the BBJ & 737-700) will be able to be fitted with the Scimitar Winglet as well. You can soon expect this new winglet to be a frequent site at an airport near you so have your camera ready.

https://www.airlinereporter.com
Inside Boeing”s 737 Renton Factory and the Successful Next Gen
VIDEO & PHOTOS: Roll Out of First Boeing 787-9 Dreamliner
5 Comments

Correct me if I’m wrong but a “sharklet” is just Airbus’s version of a blended winglet and there is no significant difference in design (apart from fitting) between a sharket and a blended winglet (as found on a B738)?

The APB blended winglet on the 737NG is held on by about 15 bolts. They are removed and inspected
at intervals for lightning damage at the mating surface. It would be safe to assume that sharklets are similarly installed in order to perform similar inspections. Im pretty sure there are a few aerodynamic diffetences between the two. However, this thing looks like an MD-11 winglet.

The Scimitar to me looks like what you would get if you mated a blended winglet to the Airbus Fences put on the A320 & A380, some kind of weird combination of the two.

How about a comparison between the Simitar and Boeing’s to be on MAX?

Its like you read my mind! You appear to know so much about this, like you wrote the book in it or
something. I think that you can do with some pics to drive the message home a little bit, but instead
of that, this is fantastic blog. An excellent read.
I will certainly be back.