During my ANA Ambassador trip, I was given the chance to fly three different types of All Nippon Airways (ANA) Business Class seats and I wanted to share my thoughts on them. For my story, I will be concentrating mostly on the hard product (the seat) vs the ’œsoft’ product (meals, service, amenities), which is common across all the aircraft.

The current generation of Business Class seats are fitted to ANA’s 787 as part of the Inspiration of Japan series. There are two different versions: international and domestic. The long haul (international) 787 seats are called ’œBusiness Staggered’ and are similar to a small pod. This is currently the airline’s premium product. The seats lie fully flat and, with a length of over 6ft, allows passengers to easily get some rest. The Business Staggered seats can also be found in some of ANA’s 777s (though the 777 version is slightly larger). 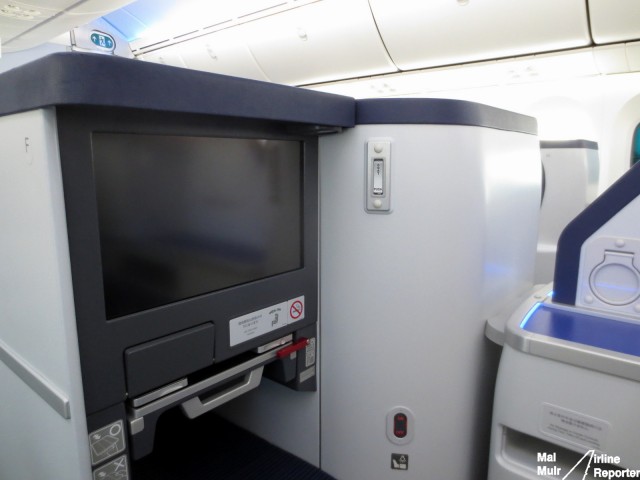 The product offers an on-demand in-flight entertainment (IFE) system with a high definition 17’ screen.  The choices were predominantly Japanese-based, but this makes sense since they are a Japanese airline. The IFE system on the 787 was a little bit sluggish at times, but nothing too bad.  There was plenty of storage space in the seat and with the generous overhead bins, I had no problem storing my belongings.

The tray table is large and extends from the seat in front (unique amongst most current Business Class offerings) and gives passengers quite a large working & eating space.  The seats of choice are either A or K for those who want a window.  All the seats have aisle access, however the A & K seats have the storage areas on the aisle side, allowing you to be closer to the window. 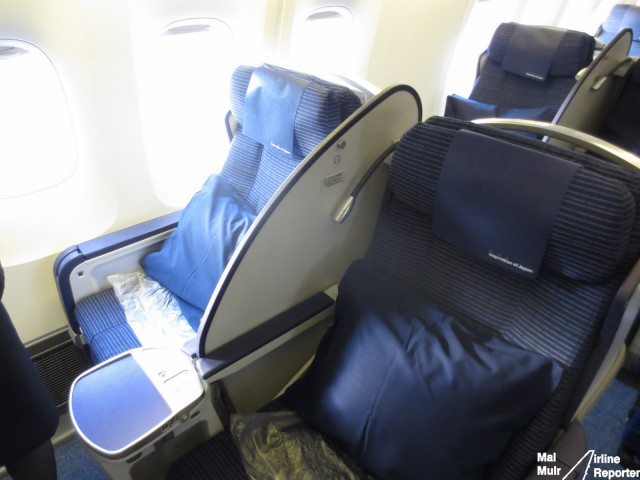 The second of the Inspiration of Japan seats is their new regional seat, also known as ’œBusiness Cradle’.  This seat is fitted to select 767-300ERs along with the domestically configured 787s.  For my four hour flight between Tokyo and Hong Kong, it was a great option.

Although the seat does not lie flat or even be angled-flat, it can recline to a decent level.  Since it is a shell-style seat, when the passenger in front of you reclines, you won’t lose any of your precious legroom.

The product offers the same IFE system, but with a smaller 12’ screen versus the Business Staggered product. The tray table, although not as large as the long haul option, is quite stable and can easily accommodate a drink and an average sized laptop.  The seat of choice, if you don’t want the window, is the middle row.  The 767 is configured 2-1-2 and the middle seats resembles more of a ’œthrone’ than a seat. 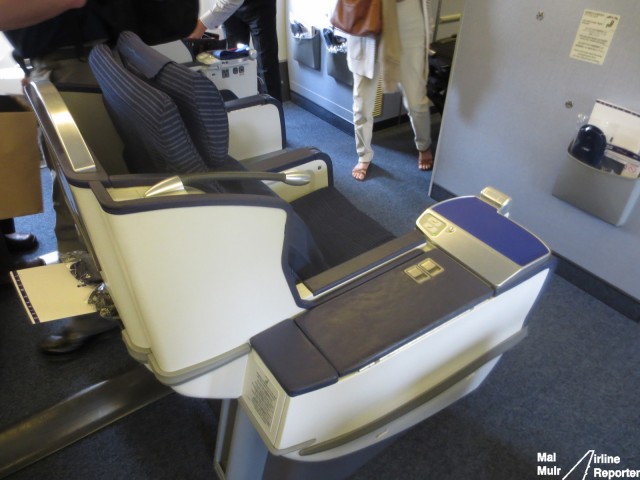 The ANA Business Cradle “Throne” seat. Check out the nice big storage compartment on the right.

The last of the business class seats I was able to experience was the previous long haul generation simply known as ’œBusiness’.  This angled flat seat is found on the 777-300 (those not fitted with the new seats) & 777-200 fleet.  Although the seat is slowly being phased out, it is still not too bad, but seems aged compared to the Staggered Business.

BONUS: My Review: Flying in All Nippon Airways Business Class

Configured in a 2-3-2 set up, there is going to be one unlucky person stuck right in the middle. It can be quite annoying to use miles or pay out of pocket for a premium seat and find yourself in the middle.

Like the Business Cradle, there is ample legroom and space as the shell seats mean no one is reclining into you.  The storage space was a little bit lacking in my bulkhead row, though in the other rows, the seat in front provides extra storage space.  The IFE monitors deploy from the armrest in between the seats and the tray table comes out of the armrest on the aisle/window side. 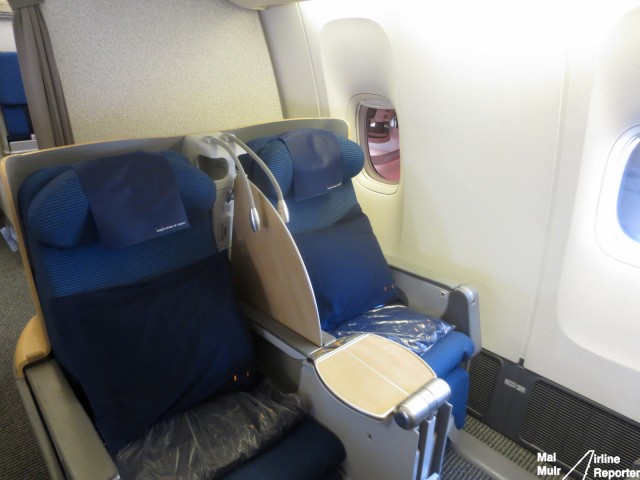 The ANA Business Seat. The prior generation of seats is used on some routes between the USA & Japan.

The middle console between the seats has a power port at the bottom and then at the top a convenient water bottle storage area. My only complaint was that the seat did not seem long enough in a relaxed/lounging position for someone of my height as it felt like my legs were not being supported.  Although once into a more reclined position it was fine. 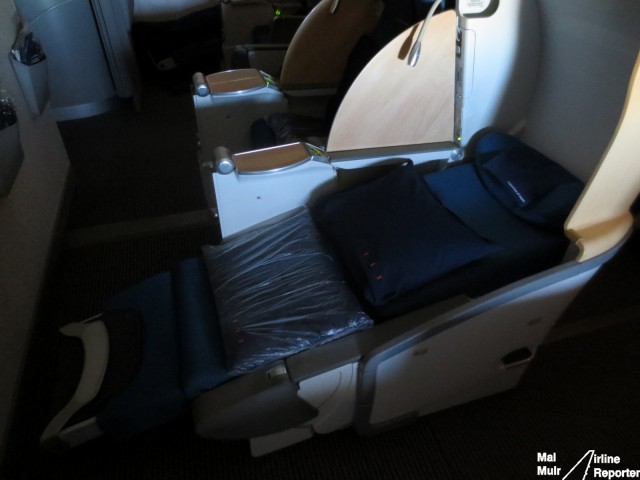 As stated previous, no matter which Business Class seat you fly in, the soft product remains the same.  There is one large ’œCourse Meal’ (as it is referred to by ANA) and then depending on the length, they will serve a smaller arrival meal as well.  The meals offer either a choice of Japanese or international fare. Typically, the international choice will have a strong french focus (albeit with the occasional bit of Asian fusion).

On some of the longer long haul routes, a number of snack options are available between the meal times and in some cases make a great alternative to the 2nd meal service.  Business Class guests can borrow a sweater or pair of pajamas for the duration of the flight, but unfortunately you can’t keep them.

Although ANA does not offer an amenity kit for its guests, they do stock the lavatories with ample supplies of everything that a passenger could want, including eye masks and face masks.  Doing it this way reduces waste from many of the amenity kits not being used, but many premium passengers have an expectation of their own kits. Each guest is provided some comfortable slippers at their seat and along with the large pillow and duvet, comfortable sleep is quite easy. 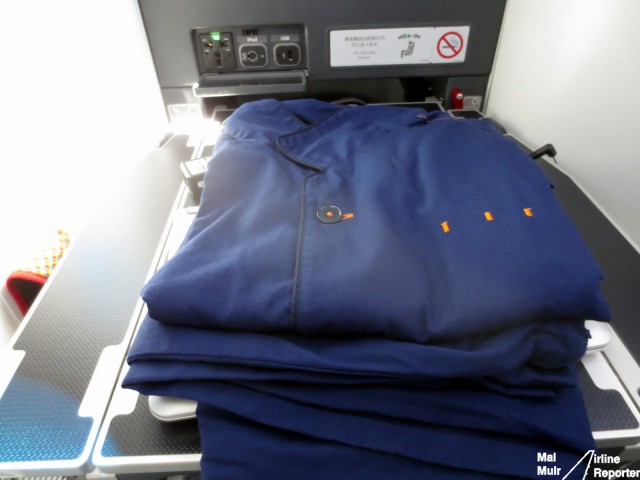 Why wear that suit & tie the whole flight? Change into a pair of the ANA pajamas and you will sleep so much better on your long haul flight.

With the new ’œInspiration of Japan’ seats starting to be rolled out on more of the flights to North America (currently on flights to New York, San Francisco, Washington DC, Chicago & San Jose), ANA is able to offer a great Business Class product on par with the best seats available in the market. However, if you are on an ANA flight without the new Inspiration of Japan seats — don’t fret too much, they still are not a bad product.

https://www.airlinereporter.com
The Next Generation Cabin Product by BMW for Singapore Airlines
A Unique Video of Frankfurt Airport – It Looks Like a Model!
5 Comments

It is truly a nice and helpful piece of info. I’m satisfied that you just shared this useful info with us. Please keep us informed like this. Thanks for sharing.

My wife and I intend to fly in business class early next year,from London. I wonder what type of aircraft it would be and what would be the seats like? Any advice on best seats and low long before our travel we can reserve it?

Recently flew business class with ANA and I think there have been a few changes – you do now get an L’Occitane amenity kit on the B777-300 for example… you can read more here:

What’s up,I log on to your new stuff named “Comparing and Contrasting ANA’s Three Business Class Products – AirlineReporter : AirlineReporter” like every week.Your humoristic style is witty, keep doing what you’re doing! And you can look our website about love spell.

This is amazing. I like it and want to experience it.