After a nice long flight over the Pacific Ocean onboard the 787 and a brief stop in the All Nippon Airways (ANA) Lounge in Narita, it was time for me to make my connecting flight to Hong Kong.  The last part of my journey that ’œday’ was on-board an ANA Boeing 767-300ER.  At the other end of the four hour flight lay a bed for me to finally get some rest. 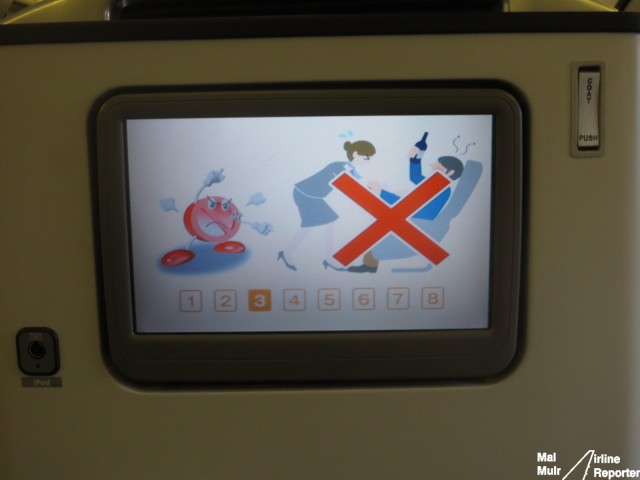 A shot of the ANA Safety Video. Is it telling passengers to behave when drunk and you cannot beat up the cabin crew –I think. Photo: Mal Muir | AirlineReporter.com

ANA operates two flights per day between Tokyo Narita & Hong Kong (with more services from Tokyo’s more central Haneda Airport). The 767s are not actually operated by ANA but instead by Air Japan, a subsidiary kind of like Skywest in the USA.  Air Japan operates a large fleet of 767s for ANA to the majority of regional Asian destinations.

As I got settled in my ’œBusiness Cradle’ seat, the sun was setting and the views out the window were magnificent.  There were plenty of AvGeek goodies around to keep me interested as I waited for our turn to take off.  Once we started climbing out of Narita, the pre-dinner drink service began and just like any flight, if you’re not sleeping, you are eating! 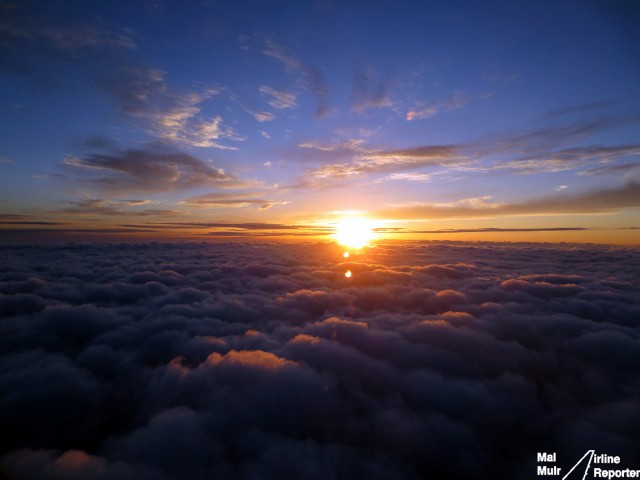 Sunset shots, like this one departing Tokyo, are what make flying even more special – Photo: Mal Muir | AirlineReporter.com

I decided on the Japanese meal and it was very good. It was a little bit weird having potatoes, noodles & rice all in the one meal, but hey — no judgement!  The meal consisted of different foods, textures, and tastes that combine to make a wonderful sensation across my palate.

The dessert was a piece of sponge cake, and although that may sound boring, it most certainly was not.  The cake was ’œCastella,’ a specialty of Nagasaki in Japan and dates back to when the Portuguese first arrived. 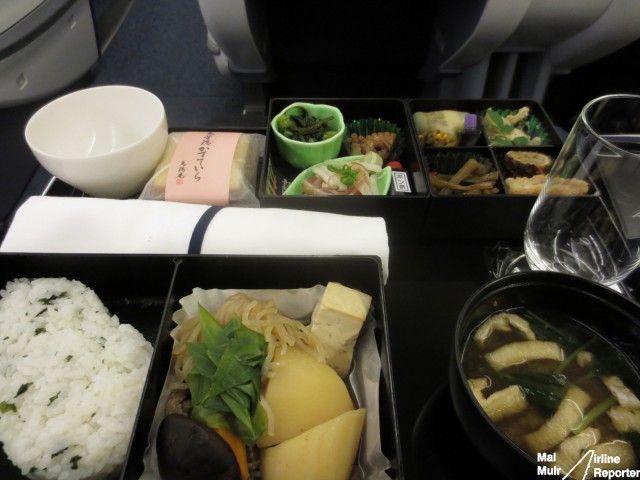 Since it was a night flight, there was not too much to see out the window, so I decided to check out the in-flight entertainment (IFE).  Thankfully the 767 business product  uses the same IFE that is found on the 787 Dreamliner in domestic configuration.

By the time we landed in Hong Kong, I had eaten dinner and dessert (with a tub of Haagen Daaz again), had some coffee, done a little work and watched a movie, all while trying to stay awake.

NOTE: I will be talking about my adventures in Hong Kong in future stories…

When it was time to come home from Hong Kong a few days later I had another 767-300ER belonging to Air Japan.  Again this 767 was fitted with the new seats and was also one of the 7 aircraft fitted with winglets.  The blended winglets fitted to 767s are over 11 ft tall and look great in the ANA livery.

My flight left Hong Kong with a slight drizzling rain, but it was all sun and blue sky after we got above the clouds.  During the ground taxi in Hong Kong there was quite a bit of AvGeek eye candy to view.  I managed to spot several special liveries, plenty of rarities (747-8Fs or 777Fs) along with a few Asian carriers that I had not managed to see before (saw my first Cebu Pacific). 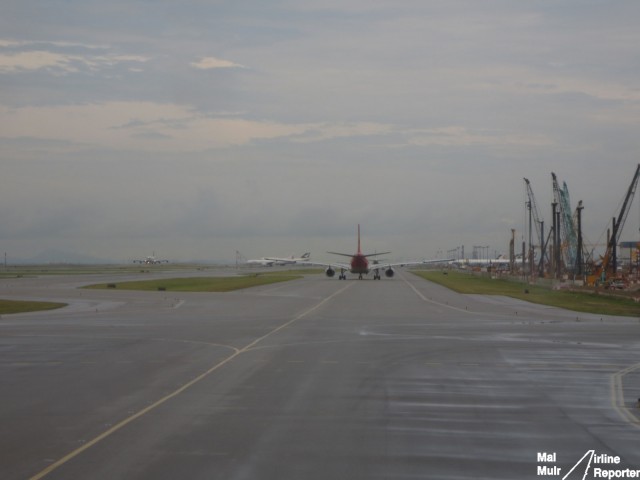 Waiting for our turn to Depart Hong Kong. A lot of aircraft ahead of us this morning – Photo: Mal Muir | AirlineReporter.com

With a 3pm arrival into Tokyo and a time zone change, the flight served lunch and I decided to go with the Western meal.  I had been rushed to order as there was a forecast of turbulence. Although I had just literally finished eating breakfast in the lounge minutes before boarding, the crew told me if I didn’t eat now, they couldn’t guarantee I could eat later.  So, I ate an early lunch and then got some work done. The tray table was not as large as on other seats, but it was quite sturdy. 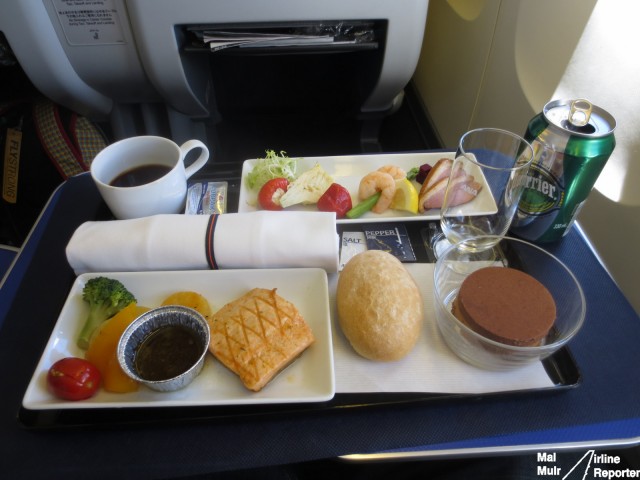 With a daytime flight there is plenty more to see out the window and this time the views at times didn’t disappoint.  The sky was beautiful and at one point, I could even spot a rainbow.  The descent into Narita brought us for our first glimpses of Japan since we left days earlier and the landing was easy.

We taxied to a bus gate and although this had groans from some people on-board, you wouldn’t hear it from me. Bus gates gives the perfect AvGeek finish to a flight; walking down the steps onto the ramp and then a drive amongst all the aircraft.  Plus it meant I actually touched Japanese soil (technically — well pavement) during this trip! 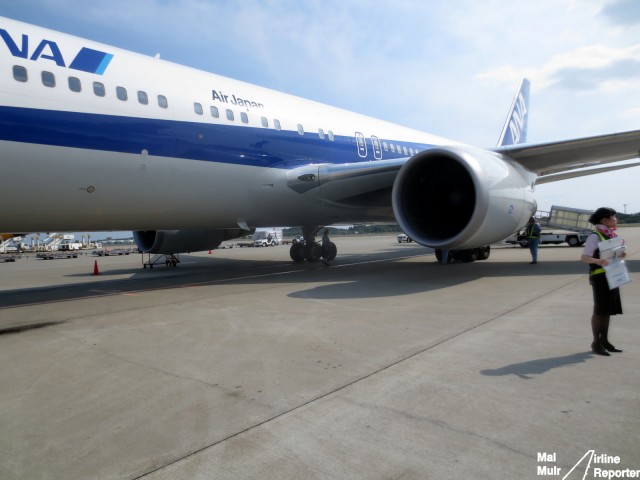 The Ultimate view for any Avgeek. Getting up close and personal to the Tarmac at Tokyo Narita – Photo: Mal Muir | AirlineReporter.com

Then it was back into the airport and through security again. I now waited for my direct Boeing 777 flight back to Seattle. If only I was able to ride on of the 747-400Ds, I would have flown on every ANA Boeing wide-body on my trip — maybe I can before they go away.

No one has made anything at airports out of actual tarmac in decades, and had it not been for the news media jumping on that word during a hijacking several decades ago, no one would be using it today. The word isn’t used in commercial aviation, where the words ‘ramp’ and (occasionally) ‘apron’ are the proper terms. In the photo above, you’re clearly standing on a concrete ramp, which is certainly not made out of tarmac material. Tarmac couldn’t hold the weigh of today’s aircraft like concrete can, which is why it hasn’t been used in decades.

Hi Mavcable. Thanks for your feedback.

Hi Malcolm,
Sounds like ANA is pretty good to Asia, Do you count how many hours from US to HK?

Hi Tom.
Depends which part of the US. West cost to Tokyo is about 9-10 hours depending on winds and about a 3 to 4 hour flight (again depending on winds) down to Hong Kong. You will get around 1-2 hours on the Ground in Tokyo between flights which is plenty to hit up the lounges or do some shopping.