If you cover the airline world, you probably know the name, Stephen McNamara. He is the crazy (or pure genius) PR person behind Ryanair. I was shocked to recently read that he will be leaving Ryanair and heading over to Rugby Football Union as their Director of Communications.

You see, I have a special place in my heart for Mr. McNamara. He is well known as being elusive to many in the aviation journalism biz and I was extremely privileged to have him email me about some “mis-information” a while back. Him leaving has stirred up the memories and I wanted to reminisce.

It all started with me writing a story way back on March 10th 2010 about Ryanair stranding some passengers. The story showed up on my blog, but also on my Seattle PI syndication. This is where Mr. McNamara found my story and strongly disagreed with what he read. He wrote directly to the Seattle PI, but since they have no editorial control over my content, the email was forwarded to me. Mr. McNamara did not like that the Seattle PI was not able to change my story.

“Your answer is less than satisfactory and it is a damming indictment of the Seattlepi.com that you would allow clearly incorrect and biased information appear and remain on your site ’“ brushing this off as an issue for the publisher is simply rubbish ’“ it is on your site, you are the publisher,” McNamara stated in his response to the PI (see his full reply here). Even at this early stage in my blogging career, I knew I was on to some gold-standard material. 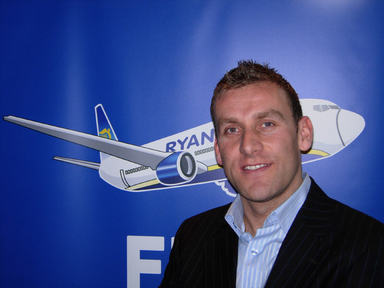 I decided to write him back. I truly don’t want to be writing wrong information and was happy to update my story. Although he stated that he doesn’t “have the time (or resources) to correct the errors most bloggers come up with,” McNamara gave me a very long winded reply email correcting my mistakes. His reply was filled with even better material and I questioned if I should share his entire email or just give a summary. Knowing Ryanair loves the negative attention and the fact that the message was just too good not to share, I made the decision to copy and paste.

If the same thing would happen today, I probably wouldn’t make the same move, but there are benefits to being a lesser known blogger.

Don’t get me wrong here… I have tremendous respect for Ryanair and Mr. McNamara. The crazy ideas they have come up with, just to get free publicity, have been pure genius. The fact that so many journalists around the world pick up the stories as fact has been hilarious.

Passengers and media love to hate this airline, but their business model of extreme ala-cart pricing and laughable headlines getting them free publicity has made them one of the most successful airlines.

It is amusing to me that some headings (example one and two) stated that working as head of Ryanair PR is the worst PR job in the world (well, Ryanair CEO Michael O’Leary actually said it first). I think I have to disagree a bit. Where else can you come up with stories, like offering standing seats only, banning kids from flights, requiring passengers to pay for toilets or state you are looking at only having one pilot instead of two in each plane and have media around the world eat up your story and give your company publicity? That sounds like a pretty rad PR job to me.

So, Mr. McNamara, I salute you and the work you have done at Ryanair. I hope your replacement is as equally entertaining and able to provide high-end content for little ‘ol bloggers like me. The fact that I have traveled the world to cover different airline and travel stories, but our interaction over two and a half years ago is still one of my favorite all-time stories says something. I wish you the best of luck.

NOTE: I will be emailing Mr. McNamara with a link to this story hoping to get some sort of comment. If so, I will update the story. I wouldn’t hold your breath, but it is the giving season right?

McNamara!!! Noooooooo!!! The airline I love to hate and get the most laughs out of will be no more after you leave, Stephen! Well, I guess I’m going to have to become a Rugby fan!

Heh. Do you want to run RugbyReporter.com?

Only if I can make McNamara mad at me and correct me on my lack of “balanced” information!