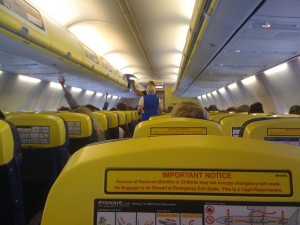 I debated if I should even blog about this, but figured why not?

Ryanair is out there running its (genius) PR machine again. It doesn’t matter how many times Ryanair says something the media will pick it up and treat it like fact. I love Ryanair’s ability to consistently do this and especially with a topic that has already been picked up previously. They will talk about some radical money-saving scheme (ie paid toilets) and then it never happens. Yet passengers get the idea that Ryanair is willing to do almost anything to save passengers money and look to them for the cheapest ticket possible, while Ryanair gets tons of free publicity. Like their PR strategy or hate it, at least it works (and I know I am guilty of helping them out).

Anyhow, Ryanair is at it again saying they are looking to provide uber low fares on stand up seats, but Boeing is saying no way. Aubrey Cohen with the Seattle PI quotes Boeing as saying, “We are not considering standing-only accommodations, nor do we have any plans to do so. Among other things, stringent regulatory requirements — including seats capable of withstanding a force of 16 Gs — pretty much preclude such an arrangement.”

Even though I don’t think it is that crazy of an idea to offer stand-seating in the future, I doubt we will be seeing them anytime soon. Many short-hop flights from 30-90 minutes could be done standing up. Think of riding a full bus or train and seeing people having to stand for longer periods of time. Unlike a bus or train, an airplane under-goes much more force with take off and landing.

Even if standing seats did exist, would they make economical sense? Ryanair is saying they would charge as little as $6 for a standing seat. Adding extra seats, but reducing fares while having to haul around more weight doesn’t seem to make business sense. It would most likely be more cost effective just to keep the sitting seats and charge more.

…and the more you do Ryanair blog entries, the more Mouth O’Leary loves you. 😛

Oh I know I am partly guilty, but they are such fun stories! I say they are genius and now Spirit is doing the same game.

And one time I got them to talk to me. I have had half a dozen people writing me trying to get in touch with Stephen McNamara https://www.airlinereporter.com/tag/stephen-mcnamara/

Part of me hopes he will write again someday 😉

At the other side of the pond, MOL’s idea is in active discussion, cf this French & English-speaking Aero Blog :

“They will talk about some radical money-saving scheme (ie paid toilets) and then it never happens. Yet passengers get the idea that Ryanair is willing to do almost anything to save passengers money and look to them for the cheapest ticket possible”