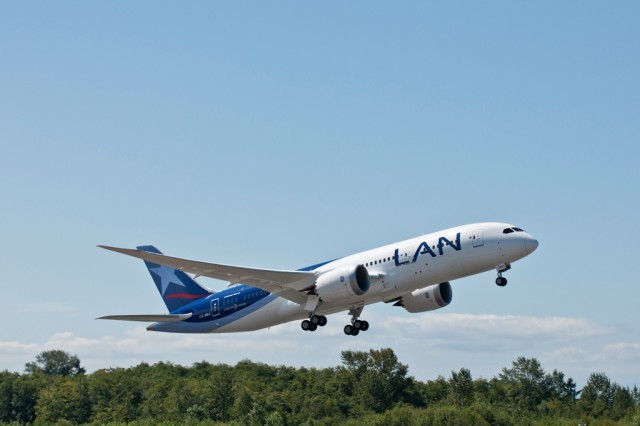 Last time, on AirlineReporter.com… I talked about the pre-events for LAN’s first Boeing 787 Dreamliner delivery flight. This story will talk about what happened from just before boarding at Paine Field, to preparing to land in Santiago.

The excitement to board the aircraft was almost palatable. Sure, we had all been on the plane earlier in the day for a tour, but this was different. This time, we wouldn’t be getting off until we arrived in Chile.

Before boarding we all had to go through a security screening just like at any other airport. While Boeing handles the screening with their own equipment, they are unlike other airports at least in that there are no TSA to be seen.

My seat assignment was 15A; economy. Heck, they could have put me in the overhead bin; I wanted to be on the flight. Due to weight issues all the media sat in the forward economy section where each row had an empty middle seat. Thankfully after the meal service everyone was able to spread out and have their own row. 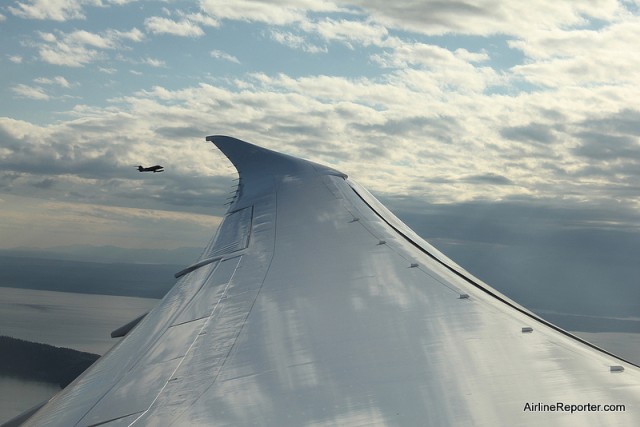 Taking off in the 787 is a great experience. Especially with a LearJet overhead.

Being inside of a 787 and hearing those engines spool up is amazing. The only thing better than hearing the engines roar (well, maybe ’œpurr’ since they are so quiet) was listening to the cheers coming from the passengers.

As we took off, some passengers noticed a black LearJet low on our left side: it was a spot plane from Wolfe Air Aviation. Instead of heading south towards Chile we instead headed west and did circles around Western Washington for about an hour.

It was entertaining watching the smaller LearJet dance around the 787, but some of the passengers weren’t so keen with the idea of another plane so close — they opted to not look out the windows. 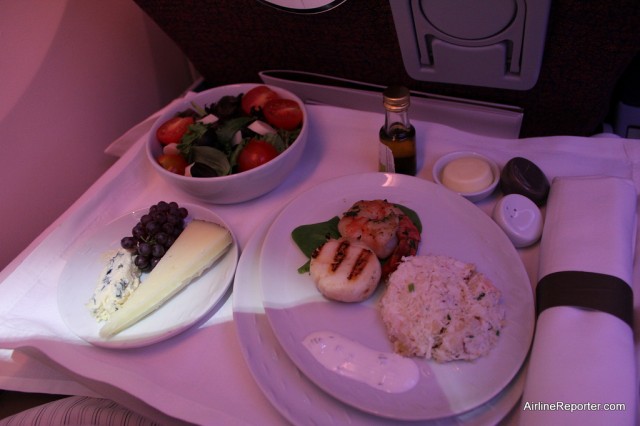 This is just the appetizer part of the meal. Yum!

This was a special flight, so no matter where you sat on the plane, everyone was getting a Business Class level of service. This meant that I was able to enjoy in some champagne before take off and the full-on meal service.

After we started heading south our first meal was served. It started with an appetizer of marinated shrimp, grilled scallop and crab timbale (Yeah, I had to Google “timbale.” Turns out it is a type of pan used in cooking. Eh, whatever, it was delicious). With the entrees, I had the choice between salmon, butternut squash ravioli, and steak. I decided to go for the steak. Finishing up the meal, I could either have ice cream or cheesecake. I didn’t feel like deciding and it was a time to celebrate, so I had a bit of both. 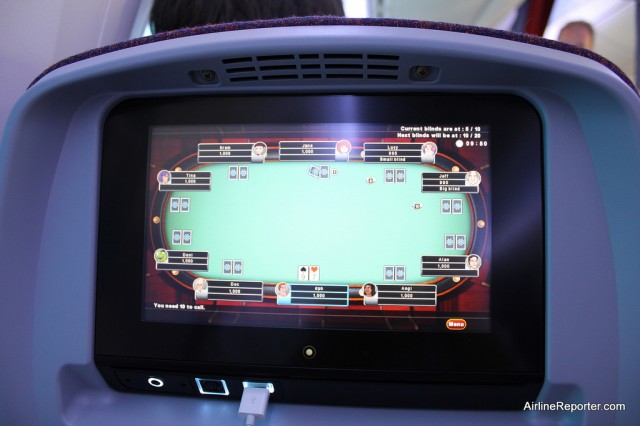 LAN’s inflight entertainment system was the best I have seen.

I was very impressed with LAN’s new in-flight entertainment (IFE) system. The graphics, speed and interface were like nothing I have seen before in an IFE system.

Many systems are quite slow and take quite a bit of work to make it respond to inputs. This system reacts very quickly and has an i-product like usability. Users can easily flick the screen to move from one menu to the next. Everything is done by touching the screen — there is no remote.

Normally I do not play many games on flights. Honestly most of them are slow and boring. But the ones on LAN’s new system were actually quite entertaining. The first game I tried out was poker. You can get up to ten people on the plane to play with you. Then I decided to try out some bowling, where you can play with one other person. With a group or on your own, the games are not just for kids. 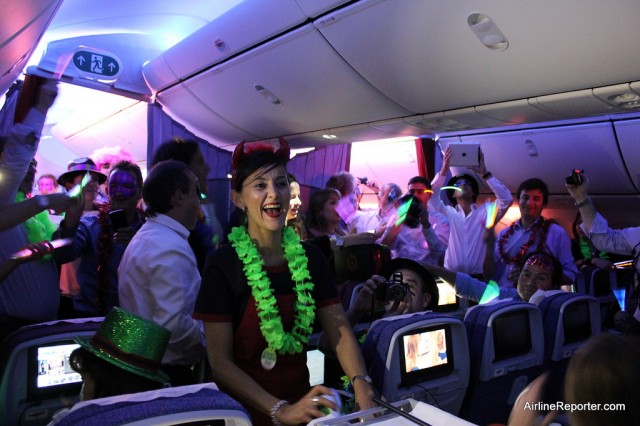 Probably the most epic photo I have ever taken inside an airline cabin. South Americans know how to party at 35,000 feet.

Right after the meal service was completed–about ninety minutes into the flight–I decided to settle down and start watching a movie, hoping to relax and prepare to get some sleep. Little did I know what was about to happen.

Suddenly the cabin’s LEDs started flashing different colors, music started playing and LAN employees came from the back of the aircraft dressed in party gear and glow in the dark sticks. They were handing out hats, masks, glow sticks and maracas. All of a sudden our 787 cabin turned into a disco-tech.

The many colors of the 787 LED lighting. I took multiple photos in the same location as the lighting changed.

People started dancing in the aisles as they sang to songs that were mostly in Spanish. I had no idea what the songs were saying, but it did not matter. The 30,000 foot party lasted about an hour before things started to die down and it was time for me to go back to my movie and try to get a few hours of sleep.

I have to say that I have never experienced anything like that in mid-flight. I have been a part of quite a few delivery and celebratory flights, but nothing this epic. 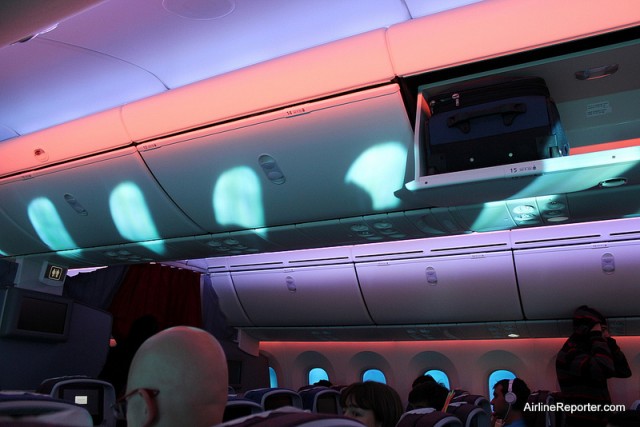 This was taken as the cabin and windows were transitioning from sleep-mode to time to wake up and eat mode.

We took off at about 6:00pm and were going to land at about 10:00am local time. That means the only sleep for the night was going to be on the plane. Even having an entire row on the 787 I found myself pretty restless, but managed to get about four hours.

During sleep mode, the flight attendants are able to control the dimming of all the windows at once, rather than visiting each seat to close the window shades. They are also able to lock them into dim mode, so that a passenger isn’t able to let a bunch of light in while people are sleeping. FINALLY. You know there is always that one passenger who decides to open their shade in the middle of everyone sleeping while it is still light outside. Lucky for that guy the dimmable windows still allows him to see outside.

Previously there have been some questions if the windows on the 787 dim enough for passengers trying to sleep. Even with the brightest sun blasting through the window, they dimmed enough so I could easily look out the window without squinting and they darken the cabin nicely. However, the cabin does not darken as much as when all the sunshades are down on a classic airliner. It is not enough to cause a huge problem for me, but those who are light sensitive might want to have an eye mask.

https://www.airlinereporter.com
Airline Livery of the Week: Belavia Belarusian Airlines and Their Retro Livery
Alaska Airlines is Out But Allegiant Still Wants to Fly From Paine Field
4 Comments

Hi David,
I can’t wait to read the next part of the trip.
How lucky you are to be in that flight, I really envy you 🙂
Hope you were able to enjoy your time in Chile.
Regards

What a great adventure. Wish I could have been there.

“The excitement….was almost palatable.” Palatable: Acceptable to the palate or taste. Palpable: Capable of being felt. Ergo, the excitement=palpable, the cuisine=palatable, or even tasty as you infer.

I stand by the comment. There was so much excitement, you could almost taste it. Maybe just smell it? Definitely could hear it.