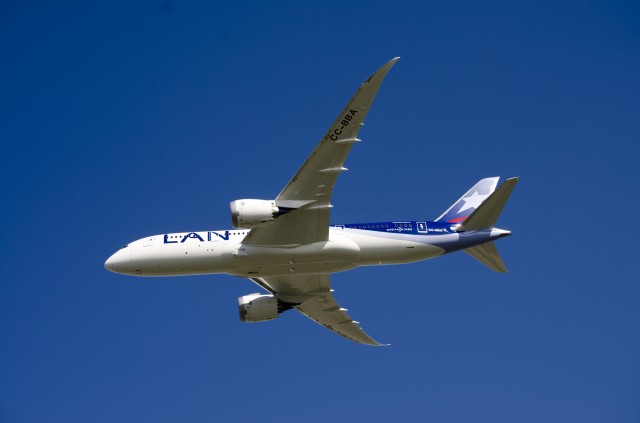 Before landing at SCL, we did a fly-over the airport. Photo by Lucas Frenk De Matos.

This is the third and final installment on LAN taking delivery of their first Boeing 787 Dreamliner. In PART 1, I shared what happened before the delivery, in PART 2, I talked about our flight and this part will wrap things up. In the near future, I will be sharing my thoughts on Santiago, giving a photo tour of LAN’s training facility and giving a review on my 767 flight back to LAX.Â

I should have been groggy with only four hours of sleep after twelve hours aloft, but the excitement of landing in a Dreamliner had me wired. I was told that we were going to fly over the airport before landing. I tried to predict what side of the airplane would face the airport and chose the left side: Darn it, the airport was on the right side. Oh well; win some, lose some.

As the plane landed, I could see hundreds of people surrounding the airport to catch a glimpse of Chile’s first Dreamliner landing. It was exciting to see so many people excited about seeing a 787 for the first time.

When taxiing to our gate, AvGeeks were not the only ones to welcome; there were also a few hundred airport employees who came out to the tarmac. I felt like a super star. 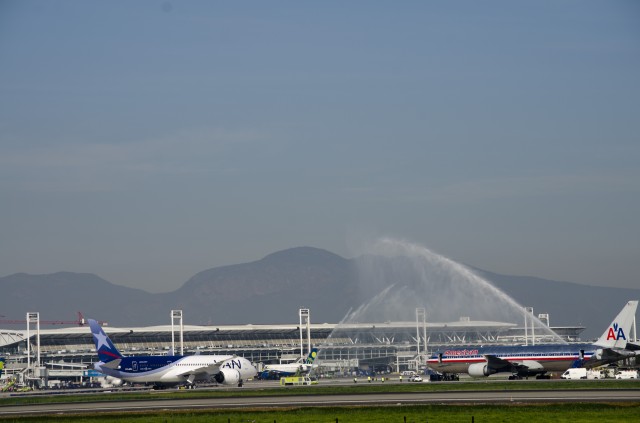 You can’t have a celebration without a water cannon salute. Photo by Lucas Frenk De Matos.

A proper welcome would not be complete without a classic water cannon salute. The picture above shows two nicely working water spouts, but unfortunately by the time the plane got to the fire trucks, something went wrong with the left one and there was no water shooting out. That is alright; I still felt plenty welcomed.

I arrived at the gate and a bunch more folks surrounded the aircraft on the ground. There was no ceremony at the airport, which was fine with me. Mostly because I wanted to get the hotel and take a much-needed shower. The Dreamliner is a great aircraft, but 12.5 hours flying economy on any plane can be tiring. 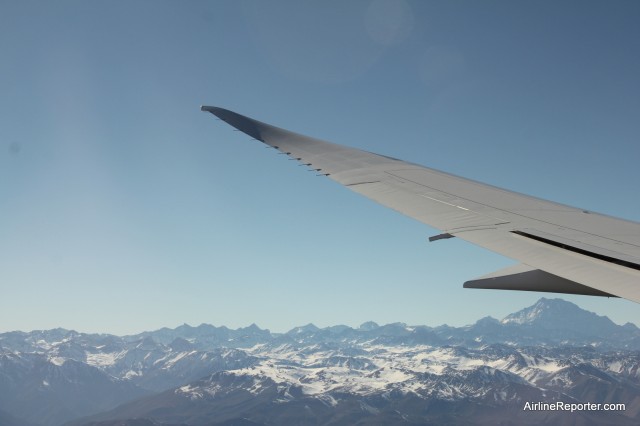 Chilean mountains and a curved wing tip — what more does one need?

Now for the big question: is the 787 that much better? To be honest it was hard to tell at the time. Boeing promotes the 787 as having lower pressure and higher humidity to lessen the effects of jetlag. Sure my nose wasn’t that dry and I actually felt okay for a 12.5 flight, but it wasn’t super obvious. It took flying home on a Boeing 767-300ER a few days later to fully realize how the 787 Dreamliner is actually different.

Even though I flew Business Class home and kept myself better hydrated, my nose was dry and I got a headache. Boeing might be on to something here.

The overhead bins on the 787 were another feature that I didn’t fully appreciate until flying home on the 767. My carry-on (which is border-line too large to be a carry-on) easily fit in the 787 bin in economy. But I had to remove some items from my bag to squeeze it into the 767 business class bin. 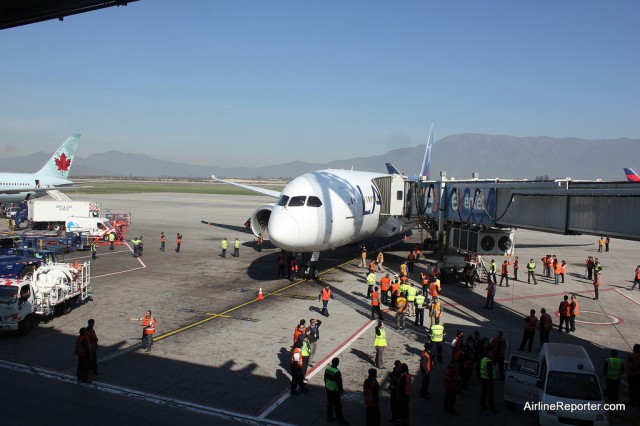 LAN’s 787 at the gate after we landed. People from around the airport came to check her out.

Previously, I have made fun of the LED lights. Mostly because Boeing, airlines, and media tout it as some revolutionary concept when really LED lights could be retrofitted into any other aircraft. But I do see there are some real benefits. Not only do they provide a great party atmosphere, but they also have the ability to slowly change the color settings. With the crew having full control over the windows and the lights programmed to slowly transition, it really allows passengers to feel the different stages of service. Again, not a huge thing, but these little things add up.

Another surprise was how spacious the cabin. The interior of the 787 seemed more like a Boeing 777 than a 767. Yes, the 3-3-3 layout in economy is a bit tight and if I had seatmates in my row, it would have been a pretty painful experience. I was told that LAN made this decision since they felt their service and product would make up for the skinnier seats.

And that wing; that amazing wing. No joke, airlines should put a notice under each window saying, “yes, the wing is supposed to do that.” At the beginning of the flight the wing was filled with fuel, so the arch wasn’t as obvious. As the fuel burned and the wing became lighter, it was quite obvious. Add turbulence to the equation and you really get a show. Sure, it might be a bit scary for those who are not used to it, but for those in the know it is truly beautiful.

Is it worth going out of your way and maybe spending a bit more to fly on a 787? I say absolutely. LAN should feel very proud to offer this new product and I cannot wait for my next flight. 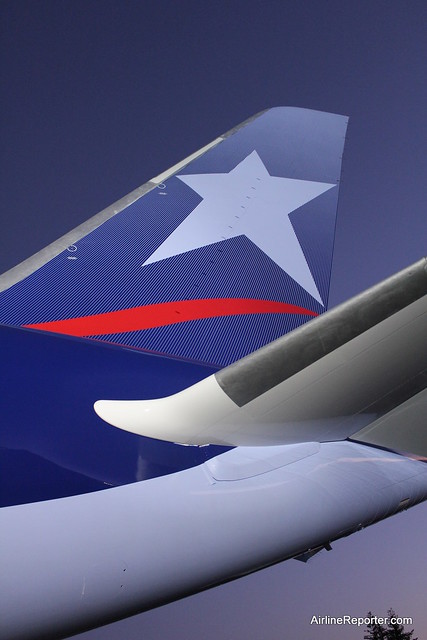 A special thanks to Lucas Frenk De Matos for letting me use his arrival photos and to Sebastian Gomez for reaching out to me about the photos.

Great story. I am planning a trip to South America and the LAN 787 is now going to be a part of that trip!

i <3 the 787 its a wonderful plane… I already buy tickets for the inaugural flight.

thank you for highlight my video in this report, David !
I am glad it was helpful in some way.
greetings