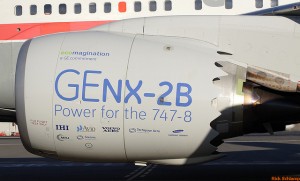 #6 The GEnx engine has one of the highest pressure ratios ’“ 23:1 that sets the high pressure compressor apart from other engines.

#6 The GEnx engine has one of the highest pressure ratios — 23:1 that sets the high pressure compressor apart from other engines.

#10 The GEnx engine has one of the highest pressure ratios — 23:1 that sets the high pressure compressor apart from other engines.

I got it the first time 🙂

Heh…I thought it was double interesting.

Thanks, I have updated with a new interesting fact :).

Dunno if this is interesting or not, the fan blades are made at a subcontractor named C-Fan, just outside San Marcos, TX.

I drive by them everyday on the way to my office.

Great info, David. You can see one of the really cool fan blades in our gallery. So beautiful, almost looks like art.

So why does the GEnx engine rotate the British way. Clockwise facing the front?

Really good question, let me see if I can find you an answer!

Alright! Heard fro Kent Moeller, GEnx Program Manager in Seattle and he says, “Unlike other GE engines the Fan and Booster on the GEnx rotates in the opposite direction to the Compressor. This was done to improve and manage the airflow more efficiently through the entire engine length.”

GE has some good info on the GEnx at http://www.geaviation.com/education/theatre/genx/ There are movies there that demonstrate the counter-rotation

I think the pressure ratio and bypass ratio came from wikipedia. Unfortunately the BPR is wrong, should be about 9:1.
Also the GE-nx pressure ratio is more like 42. 23 is for the HPC only.

Things could have changed since I posted this, but I got all the facts direction from GE.

The above GE link has some interesting numbers for 4 different variants of the engine, including BPR and PR.

Question: How much does it cost to buy a GEnx2B engine? I presume it would be between $10-15 million but I would like to know GE’s RRP.