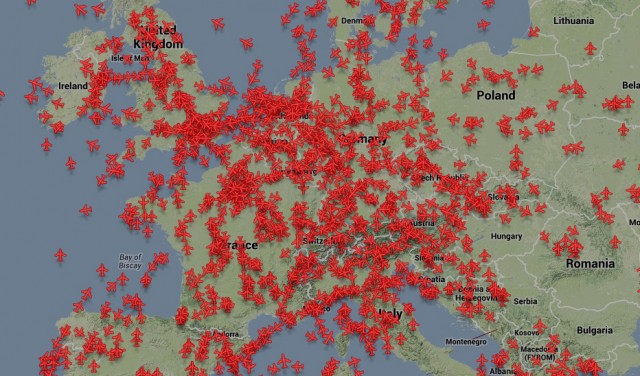 Many aircraft are flying over Europe at any given time. Image from PlaneFinder.net / Google Maps.

We are taught from a young age about the importance of working together.

’œThere’s no I in team’ was a common inspirational poster in my children’s classrooms and libraries. This is certainly still relevant to our lives today — in business, it is critical for groups to partner to address a common challenge. This mantra is especially applicable to aviation, as we must work together to make the most out of our increasingly congested skies.

With business and government leaders and even industry enthusiasts gathering in Le Bourget for the Paris Air Show last week, we were reminded of the importance of an efficient airspace system that can accommodate increased demand in interconnected air travel. The international airport that supported the influx of visitors from around the world was Charles de Gaulle Airport, located outside of Paris.  It is Europe’s second busiest airport and in 2011, the year of the previous Paris Air Show, the airport handled 514,059 aircraft movements and 60.97 million passengers.

Whether it’s to manage an increase in traffic to support a major event or to plan for steady global growth, stakeholders working as a team to create an efficient, interconnected sky — and a modern air traffic control system to effectively manage and improve it — will be critical to the success of the future of aviation.

This post was written by Steve Fulton, Technical Fellow at GE Aviation for AirlineReporter.com. Steve has been nuts about airplanes for as long as he can remember, working in high school in the antique airplane restoration business and trading work time for flying time in a PT-17 Stearman and Piper J-3 Cub. As a Technical Fellow, Steve spends his time meeting with GE customers to interpret their needs and translate that into innovative products and services, and he is continually seeking new ways to improve the air transportation industry.

It isn’t your imagination: more people are flying than ever before. The FAA predicts that air travel in the U.S. alone will double in the next 20 years, and will reach one billion passengers by 2021. Unfortunately, the finite amount of airspace to handle all of this air traffic is not being used as efficiently as current technology and methods would allow.

In an effort to improve this situation, I have spent the past 20 years working to accelerate the global adoption of a new air travel system that is characterized by predictability. This system, which I have likened to an interstate highway system in the sky, will help make air travel more efficient, providing numerous time, cost and environmental benefits. In fact, the impact of deploying this system at 46 regional airports across the United States could conservatively save an estimated 12.9 million gallons of gas and reduce 274.6 million pounds of CO2 emissions, not to mention slice off two years of time spent in the air.

In addition to allowing flights to depart precisely on time by better managing the flow of air traffic in and out of airports, highways in the sky will also allow aircraft to fly more accurate trajectories by shifting from ground-based navigational aids to a satellite-based system. Because pilots are no longer reliant on ground-based aids, it is now easier to maneuver aircraft in constrained mountainous regions, improving access to remote locations and increasing global connectivity.

Each country, airline and route has its own unique infrastructure, and therefore requires a specialized approach when working to solve the global airspace congestion issue. The work being done at Abu Dhabi International Airport, for examplewhere Airbus is collaborating with Etihad Airways to roll out optimized trajectories that shorten the approach paths to the runwayis different from the work in the mountainous airspace between Cusco and Lima. It is important to find a solution that is tailored to the distinctive needs of one challenge, while assuring its interoperability with other air traffic management systems on a regional and worldwide scale.

Making more efficient approaches can save time, money and the environment. Image from GE.

A significant effort along these lines is SESAR (Single European Sky ATM Research), a collaborative initiative to reform the European airspace and unite all of the varying systems of its countries under a singular air traffic management program. Last month I attended CANSO’s World ATM Congress, where the consistent theme was enhancing the performance of airspace and doing so by all stakeholders working together. CANSO is committed to collaborating with its partners and stakeholders and is working to make sure all of the talk and proposals of the event are converted into actions and deliverables.  A good example of this is CANSO’s commitment to work with IATA and its member airlines on the implementation of ICAO’s System Block Upgrades on the aircraft, further rollout of Performance-based Navigation and the implementation of ADS-B worldwide.  These are important elements necessary for deployment of highways in the sky across the globe.

Ultimately, it is a puzzle with many unique and intricate pieces, and many players working to fit them together. Thanks to David’s invitation to allow me to speak to the passionate, informed community that he has worked to cultivate, in my coming posts I hope to discuss some of the regional efforts to implement a revolutionary technology that is improving the way we travel. I hope to provide informative and interesting insight into how the aviation industry is working together to accommodate the rising demand in air travel, and ensuring sustainable growth.

As you may have inferred from Dale Carlson’s comments in an earlier blog post, many of us at GE Aviation are excited about our roles.  I have been passionate about aviation since my teenage years when I took up general aviation flying ’“ learning my ’œstick and rudder’ skills in a Cessna 172 while living in the panhandle of West Virginia. I’˜ve spent 27 years in the commercial aviation industry with airlines and with GE Aviation, and in my current role, I am focused on improving the sustainability of aviation so future generations can experience the same passion.

The value of the aviation enterprise is interwoven into the fabric of our worldwide society ’“ providing fast, safe, and dependable transportation of people and goods.  In fact, it is estimated that aviation is currently responsible for more than $2.2 trillion in global economic impact, or 3.5% of total worldwide gross domestic product.

However, we recognize that with our successes come additional challenges ’“noise around airports, local air quality emissions, greenhouse gases, and inflation of customer operating costs with rising fuel costs.  The good news is that we continue to make progress in tackling these challenges using advanced technology.  At GE, we call these efforts ecomagination ’“ striving to deliver operating and environmental performance with technology.  At GE Aviation, our sustainability efforts align with industry goals and focus on three pillars of improvement: operations, infrastructure, and technology.

One innovation I’m excited to talk about is drop-in, renewable Jet fuel that, once commercialized, will enable the industry to achieve up to 80% reductions in net carbon emissions versus petroleum based fuel.  The industry is also looking for alternative fuel sources that use a range of raw or waste materials that do not need to compete with food production or land use. So far, the industry has identified two pathways for the production of renewable Jet fuels, and is in the process of evaluating and validating at least five more.

Can you imagine a world where fuel comes from the waste stream and other biomass?  I can.  GE Aviation was one of the first companies, along with CFM, to test a biofuel-powered engine in flight. At last year’s Paris Air Show, GE Aviation showed an engine that was powered by 15 percent biofuel, and we will continue to discuss our biofuel-powered engines at this year’s Farnborough Air Show. Watch a video about our most recent renewable Jet fueled demonstration flights below, which, along with several other commercial flights, flew into Rio de Janeiro during the recent Rio+20 activities in June:

With all these innovations in operations, infrastructure and aircraft technology (including biofuels), I believe we have ample opportunity and reason to be passionate about the future of aviation.  Stop by GE Aviation’s exhibit at the Farnborough Air Show this week to explore more of our sustainable tech: Booth #7, Hall 4.