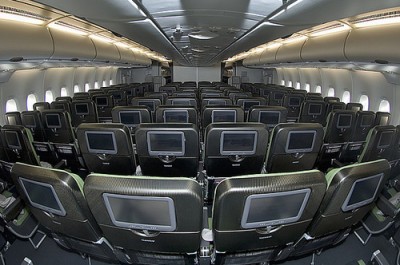 Qantas told me, ’œThe carbon fibre backshell on the Qantas A380 Economy seats is exclusive to Qantas and provides a unique natural element and visually stunning appearance. The material was selected for sleek design appeal and aircraft weight benefits.’

https://www.airlinereporter.com
Standing Seats are NOT Coming to a Ryanair Plane Near You
Ten Interesting Facts about the GEnx Engines Used on the Boeing 787 Dreamliner
12 Comments

I wonder how much weight these seats saved. I bet it was well over 1000lbs.

Well with 332 economy seats on a Qantas A380, I would imagine it would be quite a bit. I am trying to find out for sure. And even a little bit of weight saved can really add up to money and carbon emissions savings!

That looks cool. Any word on how much weight it is actually saving and how that translates into fuel savings? What about the pitch increase with these seats, or did they just make it possible to shove more seats into the plane. I would be curious to see how the recline feature with the sliding bottom works for taller people. As it is now when I sit in most economy seats my knees are within an inch of the seatback infront of me, if I have to slide forward I would not be able to recline.

I wasn’t able to get any answers (yet) on weight savings, but I would imagine they have to be significant for the extra costs that are associated with the carbon fiber.

According to SeatGuru.com, the A380 in Qantas’ fleet have 31.0″ of pitch, which isn’t bad. But with the slide reclining and footrest, it should make it feel like there is a bit more room. Hopefully I can check it out sometime soon!

Those look great, and so comfortable! Seems like a good move; weight savings are respectable and certainly beneficial. But it’d be nice to see some marked improvements in reclinability…….

I’m really curious about the difference in weight between the old and the new fancy carbon fiber seats.

having ridden on a Qantas A380, the seats were not that noticably different than the older-generation seats that are on most other aircraft.

Cathay Pacific also use this style of seat. It is completely useless for tall people since reclining reduces the amount of knee space available and that is what we are most short of. Read online reviews to see how happy people are with that. They also use thinner cushions which makes life even more miserable for taller people. BTW SeatExpert claims a 31-32 inch pitch on Qantas A380.

its only a backshell. more for the looks than for real benefits.
i bet it could be made of simple non reinforced plastics.
but of course this wouldnt look as “cool”.