Here it is — in the flesh. This is the new Frontier Airline’s livery seen outside of a hangarÂ atÂ Phoenix Goodyear Airport (GYR). It looks almost exactly as the leaked image of the livery — which is not too bad.

On Tuesday, Frontier Airlines will have an official unveiling of the new livery and we are excited to see it in person.

Are these the new liveries of Frontier and Southwest?

Today might go down as “Airline Livery Leak Day.” It appears that the new liveries of both Frontier and Southwest Airlines have leaked on the internet today, which shows that it is hard to hide things from social media.

Southwest Airlines has a media event set up at their headquarters for this Monday and Tuesday, where they have been promoting a big announcement. Similarly, Frontier Airlines has scheduled a media event for TuesdayÂ morning,Â giving big hints of a livery update. But it appears that the big surprise for both might have been ruined.

The Frontier Airlines’ image shows an evolution of their livery with a retro “F,” but keeping the familiar animals on the tail. Whereas the Southwest livery maintains the same colors, but is more revolutionary in its design. 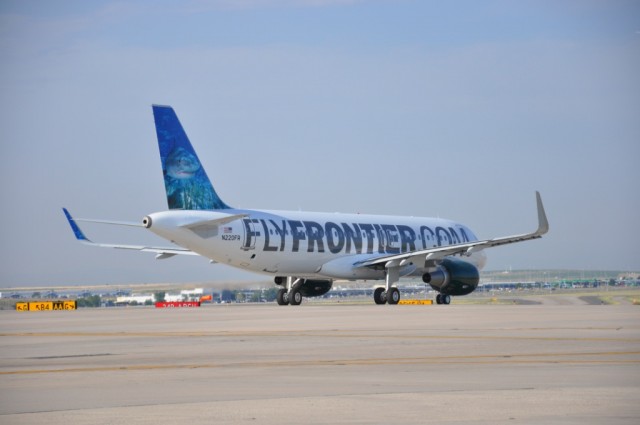 Do not worry, the cute animals are not going away! But Frontier has updated their livery to promote their website versus just the silver “Frontier” titles seen previously on the aircraft.Â  The first animal to see the new livery is Mickey the Moose, who was previously on a Q400 and Boeing 737 before being brought out of retirement to be on this Airbus A319.

“Changing our livery provided us an opportunity to promote FlyFrontier.com,” Frontier spokesperson explained to AirlineReporter.com. “We wonâ€™t change the rest of our fleet all at once, but when we add aircraft to our fleet or older aircraft need to be painted, weâ€™ll add the FlyFrontier.com to those aircraft as well.”