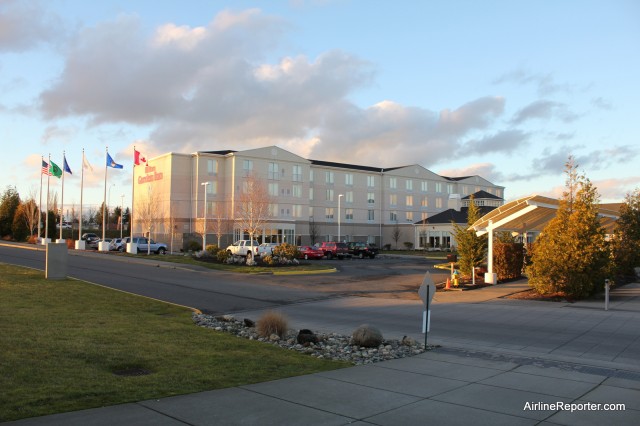 Yes, blue skies can exist in the Seattle area in January (this is Friday, most other photos are taken on Saturday with rain). This photos of the Hilton Garden Inn was taken from the entrance of the Future of Flight.

Not all hotels are created equally. Many compete with a long list of amenities to help entice travelers to stay in one of their rooms. Coffee makers, robes, Wi-Fi, breakfast are just some of the common weapons used to gain your business. But for AvGeeks there is something else that can trump all others: spotting airliners from your room. 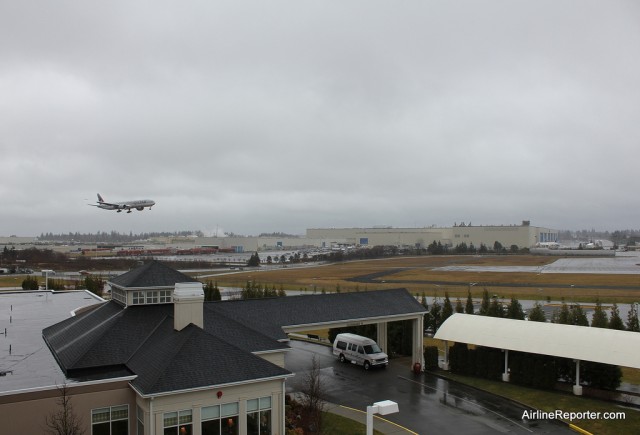 There  are the rain and clouds I have grown to love. A Qatar Airways Boeing 777-300ER about to land at Paine Field – taken from my hotel room. When it is sunny, there are plenty of wonderful mountains in the background.

There are hotels around the world where you can watch airplanes come and go, but there is only one hotel that is located right at the edge of Paine Field, where Boeing builds their 767, 777, 747-8 and 787 aircraft and that is the Hilton Garden Inn Seattle North/Everett. 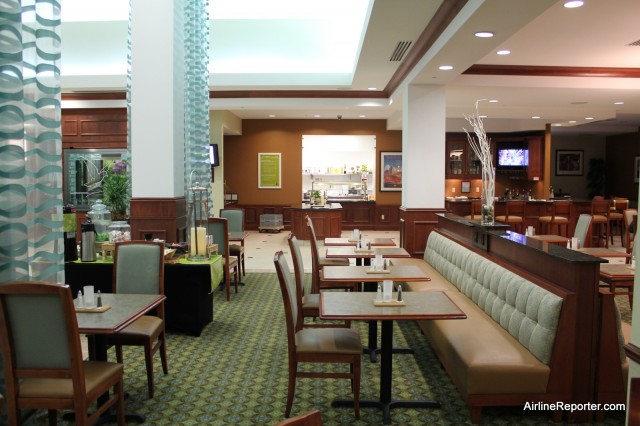 Just off the lobby is a bar (no draft, but they have bottled beer and hard alcohol) and restaurant.

Since I live about 15 minutes away from the Hilton Garden Inn, I have never needed to use it. However, talking to other AvGeeks who have stayed there, I heard positive things and wanted to see how good the aviation spotting would be from the hotel. When given the opportunity to stay at the hotel on a Friday night, I figured why not (they provided me the room for free for the review)? 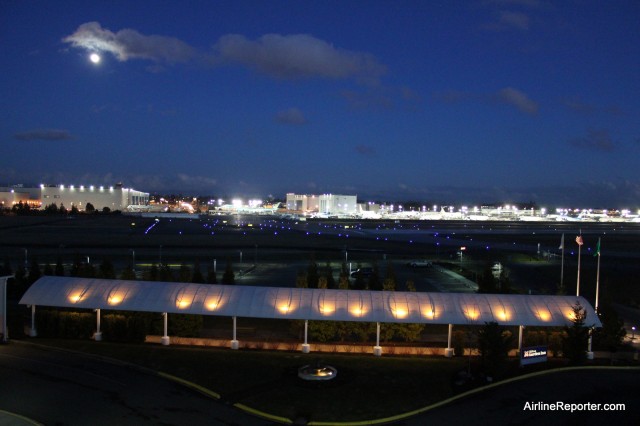 It was mighty cold outside, but warm inside my room when I took this photo of Paine Field.

The hotel is situated in the northwest corner of Paine Field, right next door to the Future of Flight. I visit Future of Flight quite often, so I was no stranger to the area. I was given the keys to the most premium room at the hotel: The Presidential Suite. Normally when a room has such an impressive name, I end up having pretty high expectations. And those expectations were more than met. 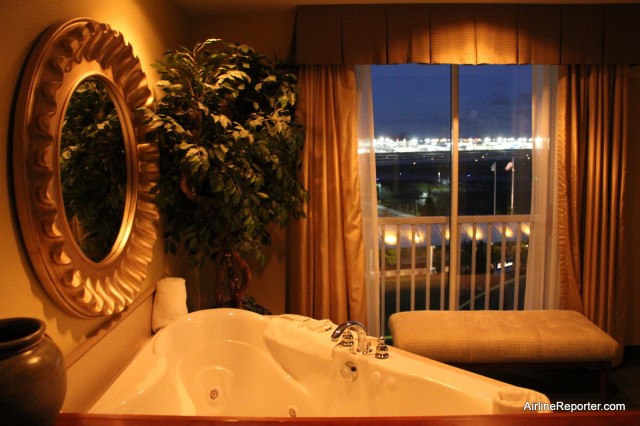 I have been very fortunate to see some pretty impressive hotels around the world. Not to say that Everett/Mukilteo/North Seattle are bad places (I mean, that is the area that I call home), but I wasn’t expecting to find such a nice room. I think when I first walked in I said something like “Holy cow, I wasn’t expecting this.” Maybe I said something a bit more adult than “holy cow,” but you get the idea. 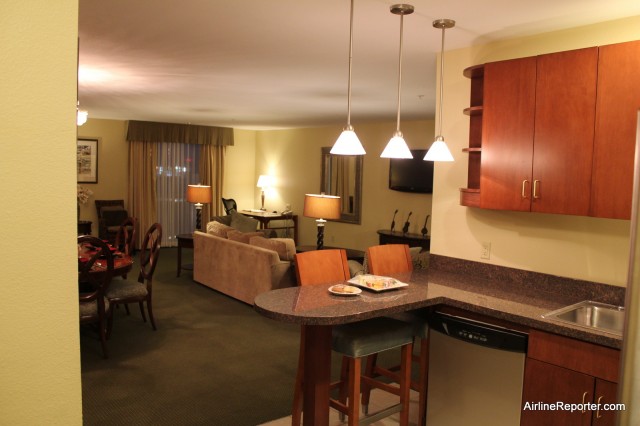 This is the view after walking into the Presidential Suite. Kitchen to the left, dining and living room straight ahead and bedroom to the left.

The Presidential Suite is the size of three standard rooms and has an almost full kitchen, a living room, full dining room, two fire places (not real fire, but whatever), and two bathrooms. I was hoping that there might be a jetted tub in the room and was excited when I found there were two: a smaller one in the bathroom off the bedroom and a quite large one overlooking Paine Field in the bedroom next to the king sized bed. 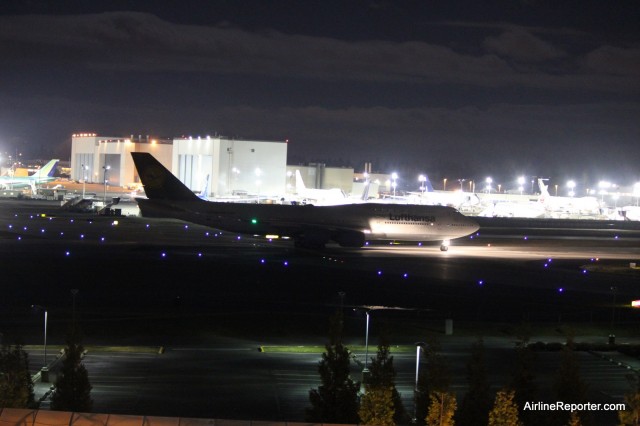 This Lufthansa Boeing 747-8I delivery flight was a few hours late, but still able to enjoy it taking off.

Sure, all these amenities are fabulous, but I wasn’t there for the trinkets, I was there to check out the view. Unlike other rooms that only have window views to Paine Field, this suite had three sliding glass doors that look out to PAE, making it perfect for spotting (which Malcolm Muir spotted me spotting from my room). Yea, I felt that this room was built for me and I was pretty certain I never wanted to leave. 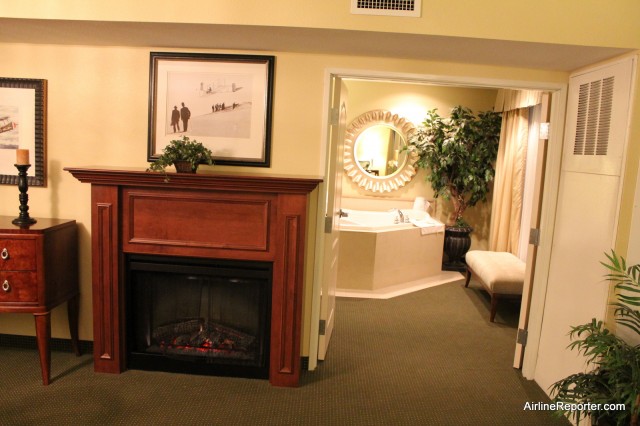 There is a fire place (fake, but still gives the ambiance) in the living room and bedroom. This is looking into one of the two double doors going into the bedroom. Also notice the aviation themed-art.

To make sure that I wasn’t only looking out the window the whole time, I brought my girlfriend Shannon with me to handle reviewing the  decor inside the room.

“When I first walked into the room, my first thought was that it was beautiful in every detail,” Shannon explained to me. “Then as I discovered the view directly overlooking Paine Field, the giant whirlpool tub that was positioned toward that amazing view, the incredibly spacious bathrooms (there were two in the Presidential Suite), and the firmness-adjustable king-size bed, I was awed by the luxury.  The full fridge, stove range, dishwasher, counter space and full silverware and glassware sets, as well as a wood dining table, all added to the exquisiteness of the room by offering functional amenities that are hard to find away from home.” 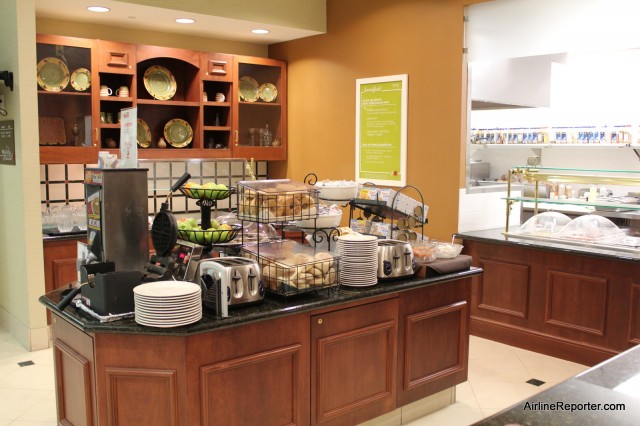 There is much more than just cereal and toast at this breakfast.

There is also the option for breakfast the next morning. I wasn’t really in the mood to get out of the nice warm bed, but luckily Shannon was willing to head down and check things out. “When I walked down to the lobby for breakfast, I wasn’t sure what to expect,” Shannon recounted to me. “Many hotels boast their breakfasts, but often disappoint.  However, when I was greeted by a smiling young woman who showed me the options for self-serve (including fresh juices, muffins and pastries, a variety of cereals, a self-serve waffle maker, bagels, and plenty of fruit), my doubts were quickly abated.  I selected the gourmet breakfast, an omelet with your choice of fillings and a selection of cheese, with sausage, bacon and hash-browns on the side.  Definitely a great way to start the day.” Don’t worry, she also brought me up coffee, juice and a waffle with strawberries to enjoy. The breakfast is not part of the room and costs $10.95 and is served from 6am to 10am (11am on Sat and Sun). 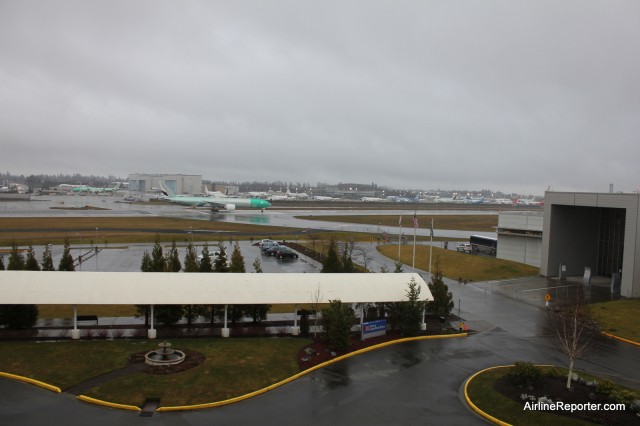 An Emirates Boeing 777-300ER prepares to take off a Paine Field. Taken from the room. That is the Future of Flight on the right.

The hotel opened at Paine Field on October 5th 2005 and offers 102 rooms and 13 suites. They estimate that about 90% of guests are connected to Boeing or one of their subcontractors somehow. This means that their busiest times are weekdays, which normally leaves plenty of rooms open on weekends for you AvGeeks to visit Seattle.

For guests, there is a free shuttle that will take you up to five miles of the hotel (you can walk to the Future of Flight, but this would be handy to check out the Flying Heritage Collection and Historic Flight Foundation) and they will also take you to the Alderwood Mall and Everett train station (which are outside the 5 miles). 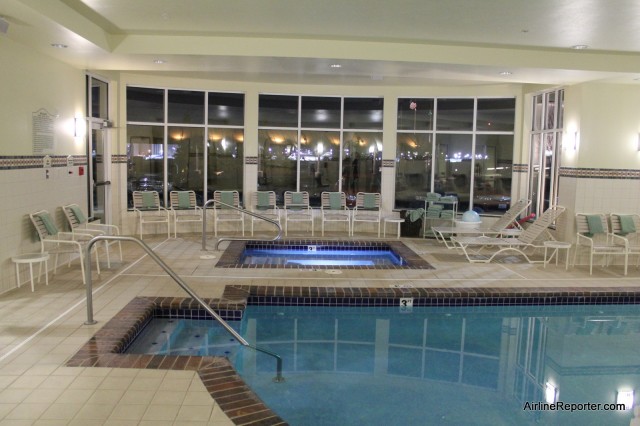 The hotel has a small pool and hot tub. Also a  well-appointed gym.

Shannon and I argued over what our room must cost. We were both way off (we guessed much higher). Get this: a night in the Presidential Suite ranges from only $159-$250 per night depending on the date. Now, I am definitely not a person of means, but that is totally affordable, even for a staycation. Heck. I am at Paine Field all the time, but was quite giddy with staying at the hotel and watching airplanes take off and land from my room (and a bubble bath).

This is a great hotel for a non AvGeek, but a must-see if you are coming into Seattle to check out some of our great offerings or even a local looking for some AvGeek excitement.

Maybe you have already stayed? I also know Aviation Geek Fest 2013 is coming up soon and the hotel is still offering a special #AGF13 rate. So, if you have stayed or will stay, drop a line or two in the comments to share your thoughts — the hotel will be listening.

ALL 38 PHOTOS FROM MY HOTEL STAY