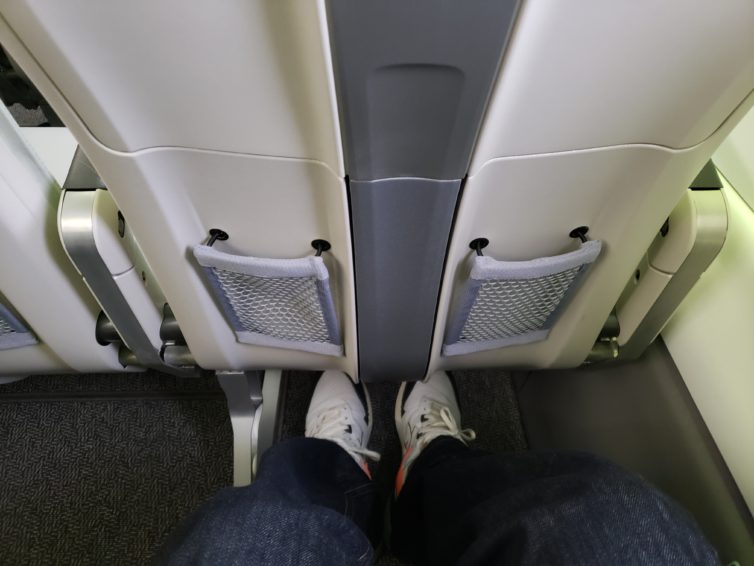 Plenty of legroom in the exit row of the A220. Photo: Jonathan Trent-Carlson

The seat itself was quite comfortable. I had plenty of room to stretch my legs out in front since I was sitting in an exit row. There was no wide seat back pocket at the bottom of the seat in front of me. Instead, two narrow pockets were provided. My smartphone was just barely able to fit inside them. At the top of the seat back was a hard, plastic pocket, where the safety information card was stowed. Other airlines have opted to put a seat back entertainment system there. AirBaltic, being a budget airline, did not have a seat back monitor or inflight entertainment options. There was a small monitor beneath the overhead bins at nearly every row. This monitor would serve as both a flight tracker and commercial advertisements during our flight.

Another man arrived in my row and sat down in the aisle seat. A flight attendant came by and asked that we review the safety information card since we were sitting in the exit row. One thing that struck me was, that unlike in the US, I did not have to give verbal confirmation that I was “willing and able to provide,” assistance in case of an emergency. There was no one in the middle seat, and I later learned that you could pay to have an empty middle seat. I had no idea if the passenger in the aisle seat had paid to keep the middle seat empty, but I was grateful that it was. 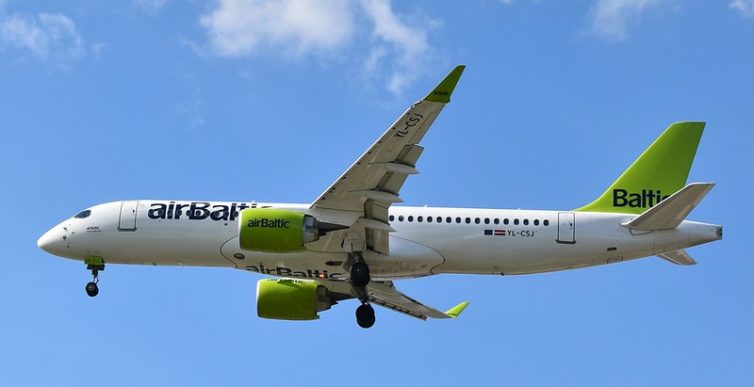 The boarding door closed, and it was time for takeoff. We were leaving about 10 minutes behind schedule. Although it was a brief delay, the captain announced her apologies before the safety demonstration started.

As we took our position on the runway, the engines revved up for takeoff. They were noticeably quieter than other engines of similar aircraft I have flown on previously. They gave off more of a soft whirr rather than a loud whine as we began racing down the runway to get into the air.

Takeoff was smooth, and we soon reached our cruising altitude of 38,000 feet. The flight tracker on the little overhead monitors showed we’d be flying over the Netherlands, Germany, and Poland before landing at VNO. I had a window seat, but you could see nothing but clouds below. 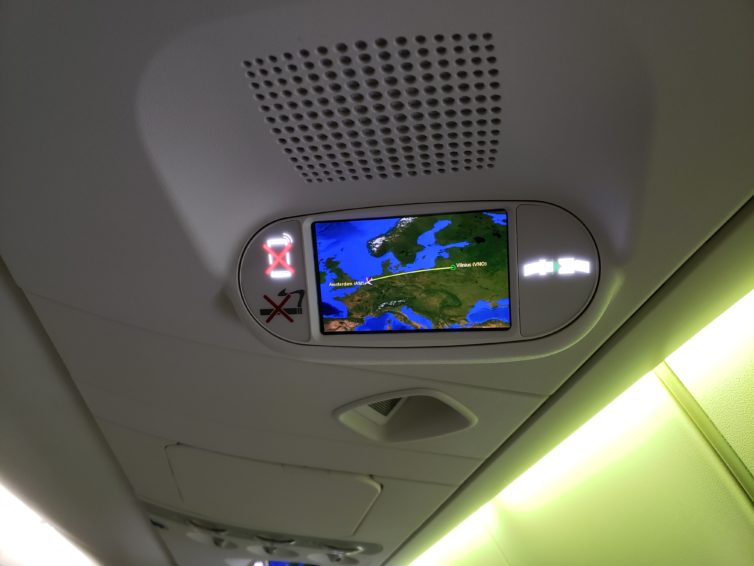 A few minutes after the plane had leveled out at the cruising altitude, the flight tracker screen became airBaltic QVC. As a budget airline, airBaltic charges economy passengers for drinks, snacks, and meals on some flights. I was not particularly hungry, but was in desperate need of caffeine, so I paid three euros for a cup of coffee. AirBaltic serves Illy coffee on their flights. Illy is by no means my favorite brand, but it gave me the boost that I needed. 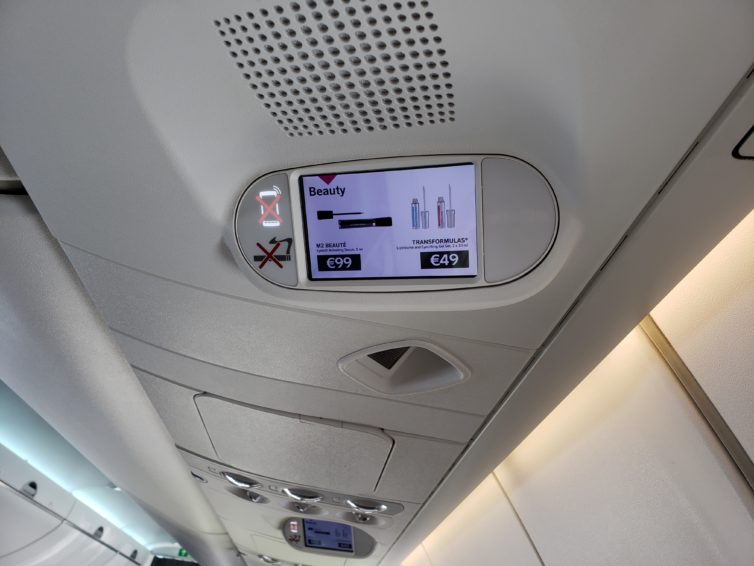 99 Euros for mascara + no shipping and handling. Thank you for watching airBaltic QVC. Photo: Jonathan Trent-Carlson

As I sipped my coffee and read my book, the flight attendants completed their cabin service. The overhead monitor kept switching from the flight tracker to the next episode of airBaltic QVC. This time, the flight attendants were pushing a cart full of watches, perfumes, and other items for sale. Most people declined to buy anything, and I went back to reading, as the clouds continued to obscure any view of Europe below. 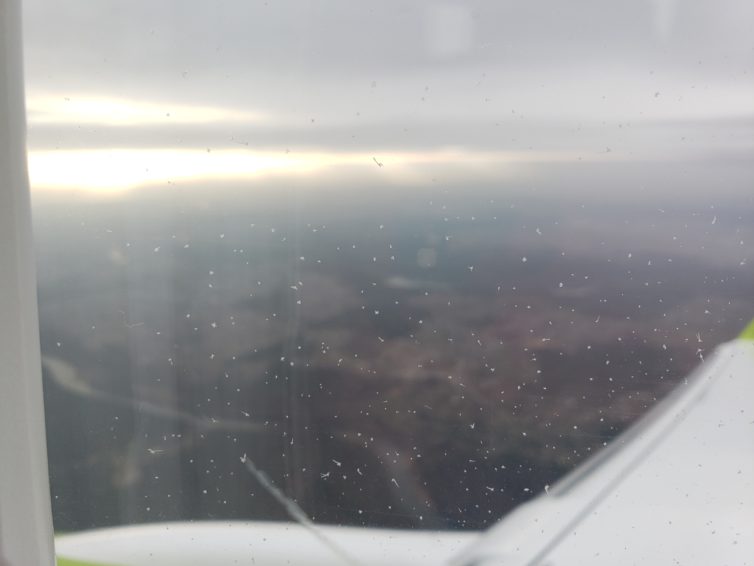 Small ice crystals stick to the window as the sun tries to break through on our approach into VNO. Photo: Jonathan Trent-Carlson

About one hour later, we began to make our initial descent into VNO. As we dropped below the clouds, Vilnius came into view, along with small ice formations sticking to the side of the window. In the distance, some breaks in the clouds showed pools of light with an orange sky, as the sun was beginning to set early in the afternoon.

The landing at VNO was smooth. We taxied to the gate, and the all female crew thanked us for flying them as we deplaned. The airport at VNO is small. The baggage claim area is in an area of the airport that is below the gates but still for passengers only. As people collected their bags and walked out the automatic sliding glass doors, I could see my friend waiting for me on the other side. When my bag came out on the carousel, I collected it and walked towards her. 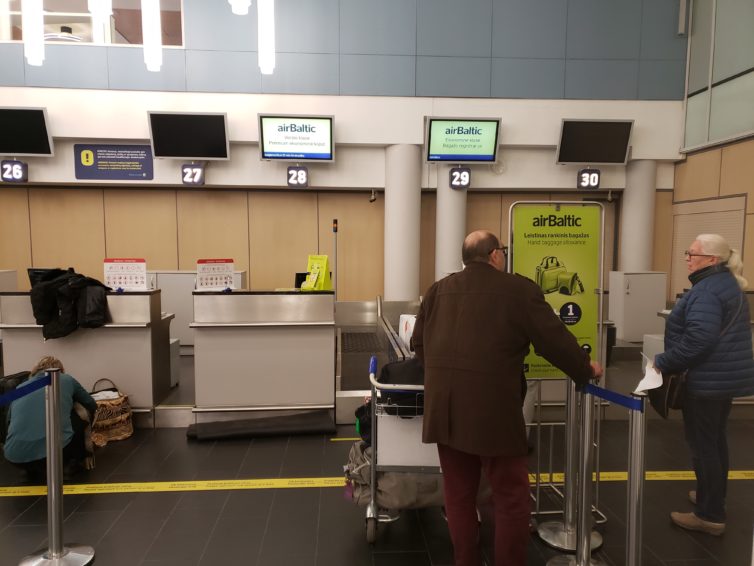 Checking in for my early morning flight. Photo: Jonathan Trent-Carlson

Fast forward a few days, and after we had explored Lithuania, it was time to return home. The first leg of the trip was from VNO to AMS, again on airBaltic. This time I had paid to upgrade to business class. I was looking forward to seeing the differences and seeing if it might be worth it. Stay tuned as I share my airBaltic Business Class experience soon.

Au Revoir Air France A380: This Grand Dame was Getting a Little Lame
Business Class on AirBaltic’s Airbus A220… Moving on Forward
2 Comments

Is that a camera pointed at the emergency exit?

Great question. I am honestly not sure what that is, and really didn’t notice much of anything else beyond the little overhead monitor. I’ll have to pay more attention next time. – Jonathan