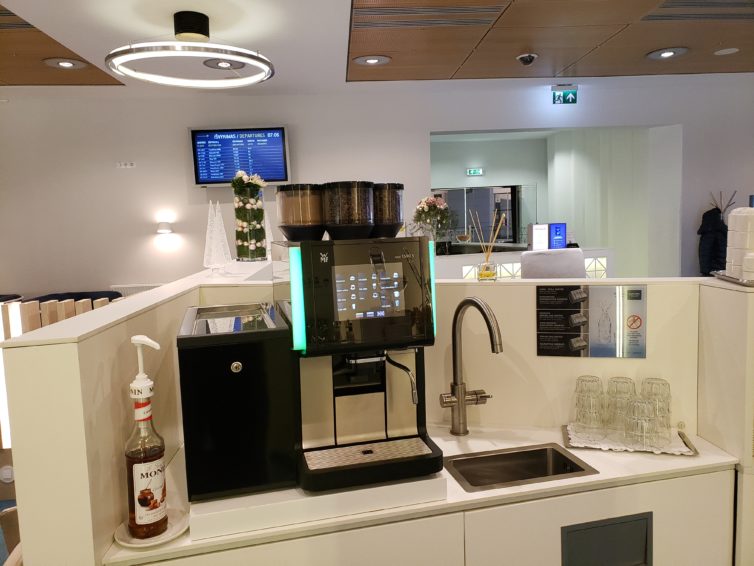 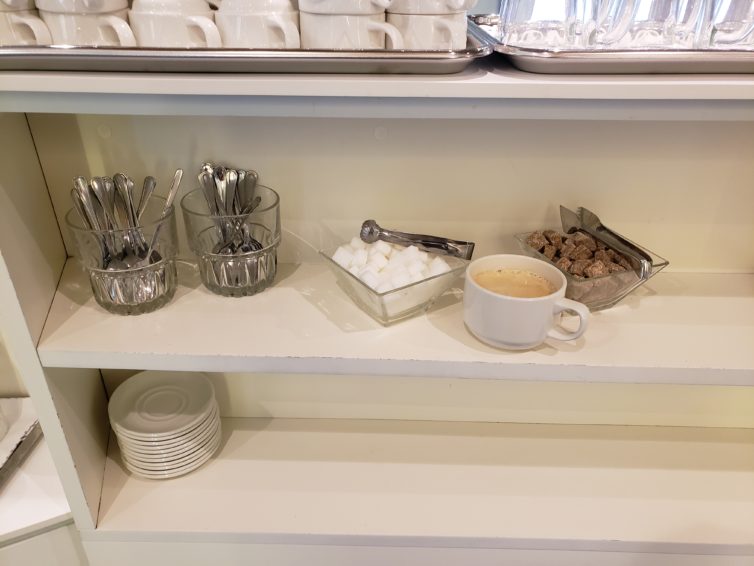 I take it with two sugars. Photos: Jonathan Trent-Carlson

There was also a spread of pastries along one of the walls. I was not hungry, and was going to receive breakfast on the plane, so I didn’t eat anything. Instead, I just grabbed some candies for later and made my way to a chair to enjoy my coffee. I had time for a quick refill, but had to chug it as boarding time was near. 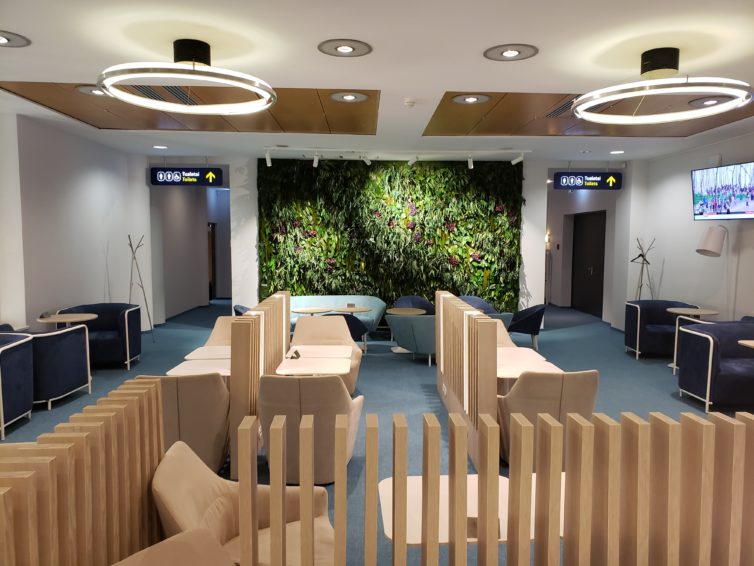 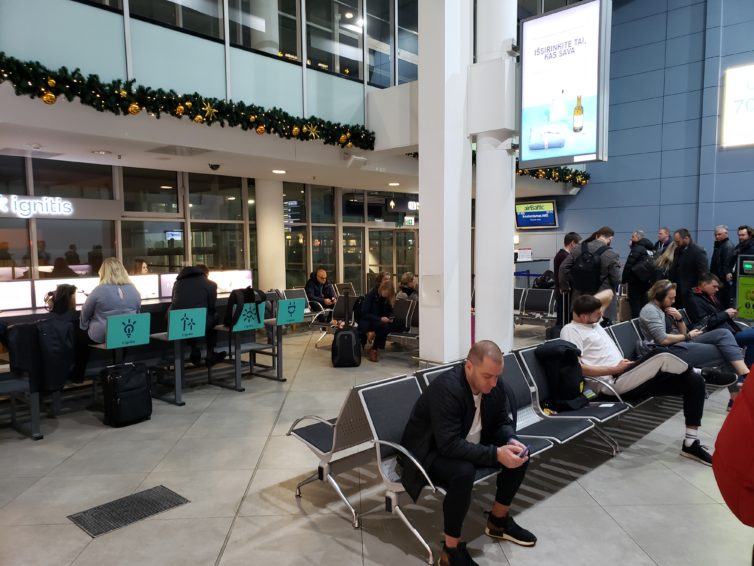 The gate area at VNO was smaller and less chaotic than at AMS. The boarding process was similar to most airlines in the US, with everyone crowding the gate area waiting for their group to be called. Being in business class, I could have been one of the first to board, but I had arrived later due to being in the lounge and just took my place at the end of the line.

As I walked down the jet bridge, I noticed that our plane had a special livery. AirBaltic has three A220-300s with a special livery, using the flags of the three Baltic nations of Estonia, Latvia, and Lithuania. The plane I was about to board sported the Estonian flag livery. As I stepped off the jet bridge and into the plane, I noticed that the door mat still said “C Series,” on it, but the fuselage had “A220-300” stamped beside the door. 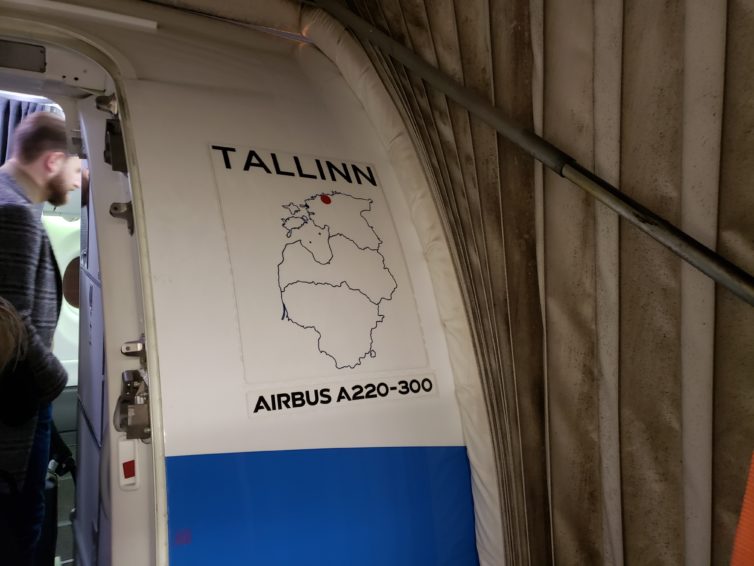 This airBaltic A220 sports a livery to honor the nation of Estonia. Photo: Jonathan Trent-Carlson 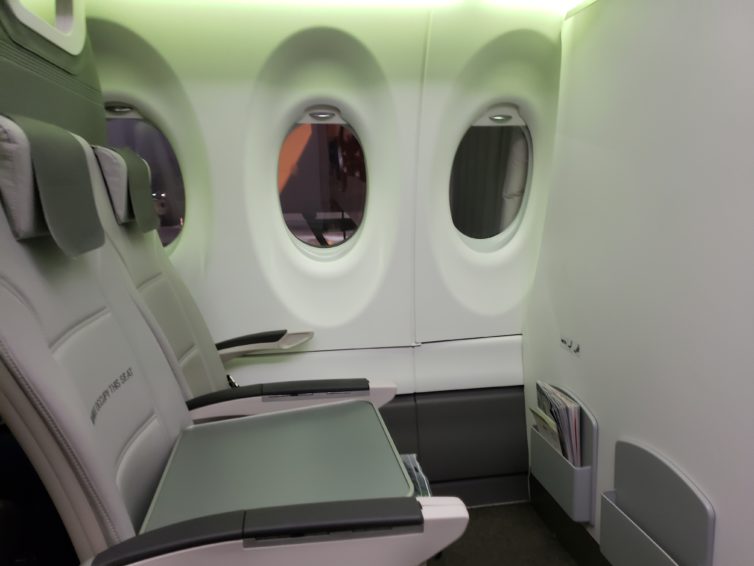 In business class on airBaltic, seats are physically blocked to ensure everyone has space. Photo: Jonathan Trent-Carlson

After I took my seat and everyone had boarded, the safety demonstration began. A pre-recorded voice asked us to follow along, “even if you are a frequent flyer and know this all by heart.” After the demonstration was over, the flight attendants closed the curtain between business and economy class. They also offered me a newspaper, and I selected the Financial Times. I was the only one in business class, and the closed curtain gave me a feeling of flying in a private jet. The leg room was less than the exit row seat I had in economy. 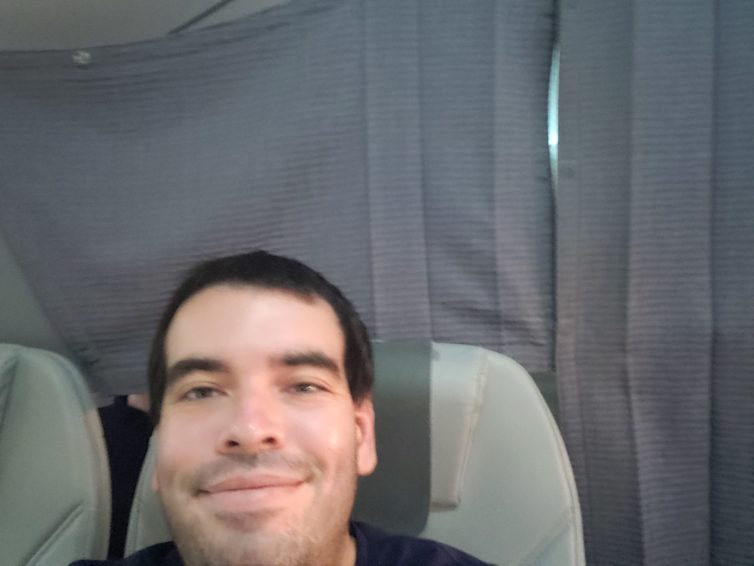 The closest I’ll ever get to a private jet experience. The only one in the business class section of the A220.

Once we had reached our cruising altitude, the flight attendant asked if I would like anything to drink. Early in the morning, the only drink I desire is coffee. The coffee was served in a nice mug, white with a small, patterned green stripe opposite the handle. This mug was kept full during the flight, and represented impeccable service by the flight attendant. 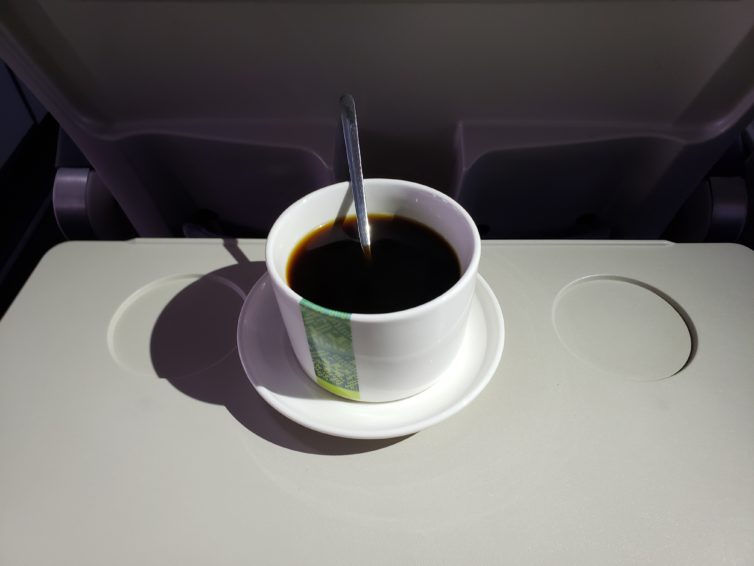 The flight attendant made sure this mug stayed full. Photo: Jonathan Trent-Carlson

The flight attendant asked when I would like to be served breakfast. Normally, my breakfast consists of just coffee. I wasn’t that hungry, and the flight attendant informed me it would take about 15 minutes for it to heat up. I decided to go on and have it prepared, even though I normally don’t eat breakfast. 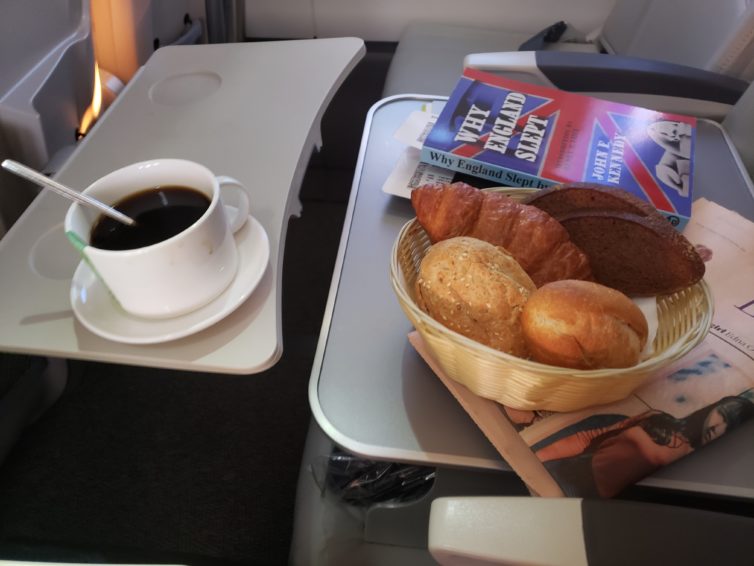 Being the only one in airBaltic’s business class meant I got all the bread. Photo: Jonathan Trent-Carlson

The breakfast service consisted of a selection of bread. Since I was the only one in business class, they gave me the entire bread basket. The croissants were delicious.

This was followed by a tray full of food. An appetizer of fresh vegetables and cheese, the main course of a chicken and cream cheese omelet, and dessert with granola, yogurt, and honey. The appetizer and dessert tasted like you would expect, but the omelet was delicious. When it comes to serving a hot breakfast, airBaltic and Air Canada are among the best in my experience. 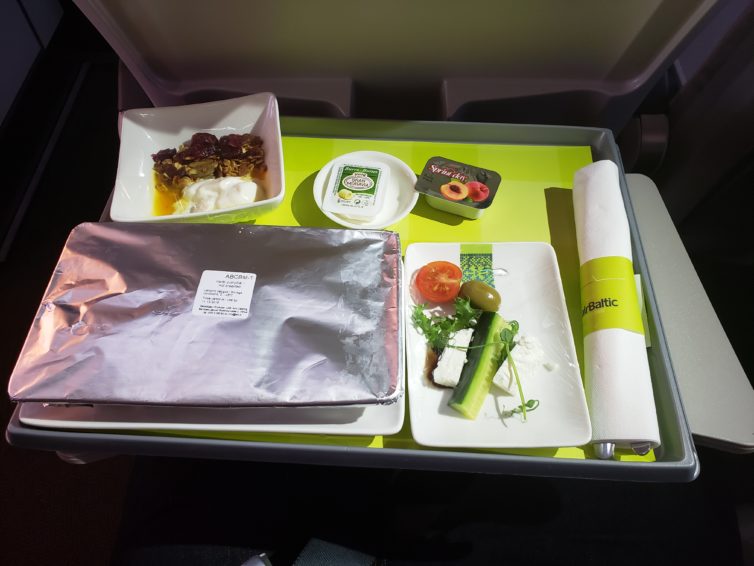 The breakfast presentation, with the omelet wrapped up like a present. The quality of the food was like an unexpected but most welcome Christmas present. Photo: Jonathan Trent-Carlson 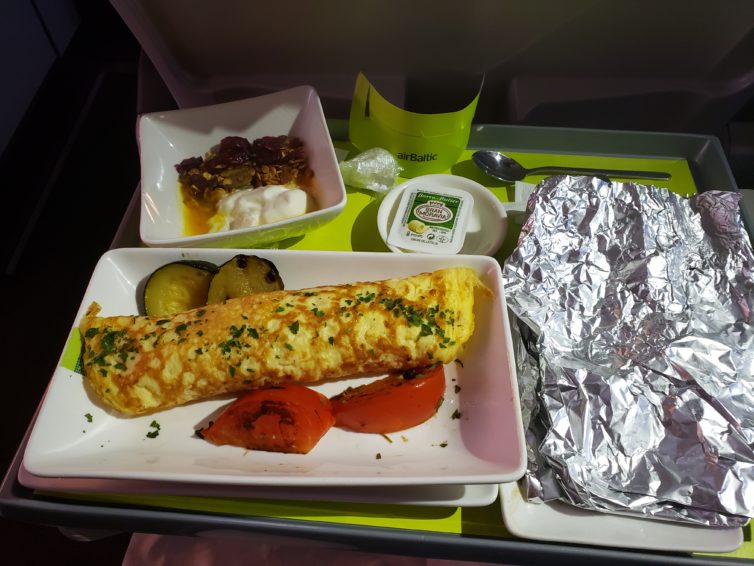 The omelet. It was delicious! Photo: Jonathan Trent-Carlson

As I was finishing my breakfast, the flight attendants began service to the main cabin. As on the initial flight to VNO, they made a couples passes through the cabin to sell various items. The first pass was to sell coffee, breakfast items, and snacks in the main cabin. The second pass was to sell perfumes, colognes, and souvenirs. Like on the first flight, the screens advertised the items for sale. The rest of the flight was uneventful. My coffee mug was kept full, and my book kept me entertained. We landed at AMS about two hours after takeoff. As the plane pulled into the gate, another airBaltic A220 was parked next to us, with the Lithuanian flag livery.

The forward door opened, and I deplaned, making my way to the KLM lounge to wait until it was time to board my next flight, onboard a KLM 787-9 Dreamliner to JFK. 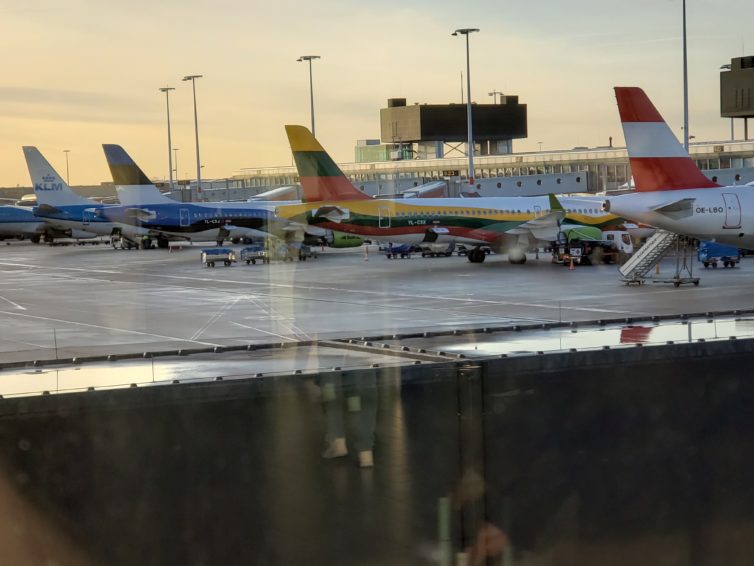 As I walking to the KLM lounge, I turned around to snap this picture of airBaltic’s A220s. These are two of the three planes that have a special livery, the third features the flag of Latvia. Photo: Jonathan Trent-Carlson

Overall, airBaltic is a great airline for a budget carrier. Passengers who value legroom should definitely try to get a seat in the exit row. Those who want additional space can purchase the option to keep the middle seat empty. If flying works up your appetite, then business class is the way to go. Either way, your experience is sure to be more enjoyable than other budget options flying around Europe.

The A220 itself is a great airplane. Whether airBaltic, or Air Canada, it will have a more spacious feel than smaller regional jets and enable mainline service on multiple routes served by regional contractors. Fun fact: airBaltic was actually the launch customer for the A220. In the future, airBaltic is planning on flying an all A220 fleet.

Uncharted Territory: AirBaltic’s Airbus A220 From Back to Front
Flying During Corona – Closed Concourses and Empty Mega-Hubs
3 Comments

I would like some information on how I can work for this airline as a flight attendant?

I would start here ,at the airBaltic careers website.

Let them first pay to custumers
What they should pay under their fligths cuncelation….