Regular AirlineReporter readers likely know by now that I am a Southwest Airlines loyalist. No, not every flight I take is with Southwest, but indeed, most are. There are many reasons for my loyalty which I think I have done well to document over the years. But with each piece discussing my loyalty to the LUV airline, I get comments, tweets, and emails urging me to take my loyalty elsewhere. The perennial argument typically focuses on a chance at upgrades, and, in general, feeling “rewarded.”

Any given year I typically fly just enough between my day job, leisure, and AirlineReporter gigs to renew Southwest A-List. Like so many of my frequently flying cohorts, by the time Q4 hits I’m often in panic mode, forecasting upcoming travel and ensuring I’m on track for status renewal. Because of this there typically isn’t much wiggle room for me to experiment with other carriers.

This year has unfolded differently. By September I was well ahead of schedule for renewal, with multiple upcoming trips sure to push me over the mark. Sadly A-List Preferred was not in reach. For the first time in years, I didn’t have to worry about renewal and had the opportunity to start revisiting some of the other carriers with more regularity. But was there any incentive to? And who might I focus on? My backup airline is typically Delta, my favorite of the legacies. I fly them a few times per year already so I likely wouldn’t learn anything new. What about United? As a Lifetime Titanium perk, Marriott Bonvoy granted me complimentary United Silver status. But United is my least favorite airline… 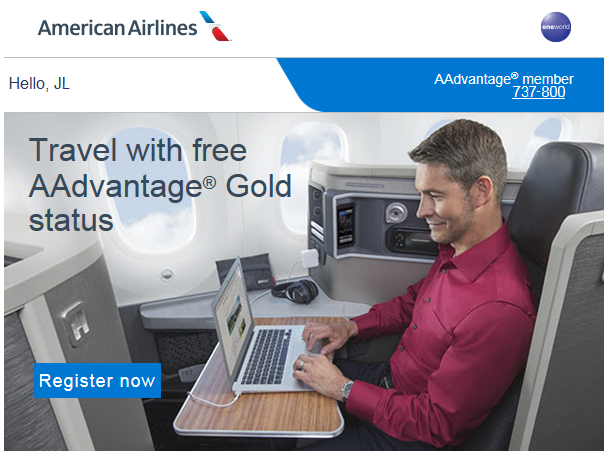 I want to be upfront here- I do not believe American Airlines offering me a gold trial had anything to do with AirlineReporter. My AvGeek wife and fellow Southwest fan received the exact same invite a few weeks earlier. Additionally, these sorts of promos seem pretty standard as airlines flight for loyal flyers. The airline doesn’t share what the magic sauce is to trigger these, but I would venture to assume that our trip to fly the MD-80 one last time (in Main Cabin Extra) is what got us on their radar. Perhaps they assumed we were “premium” flyers ripe for poaching? 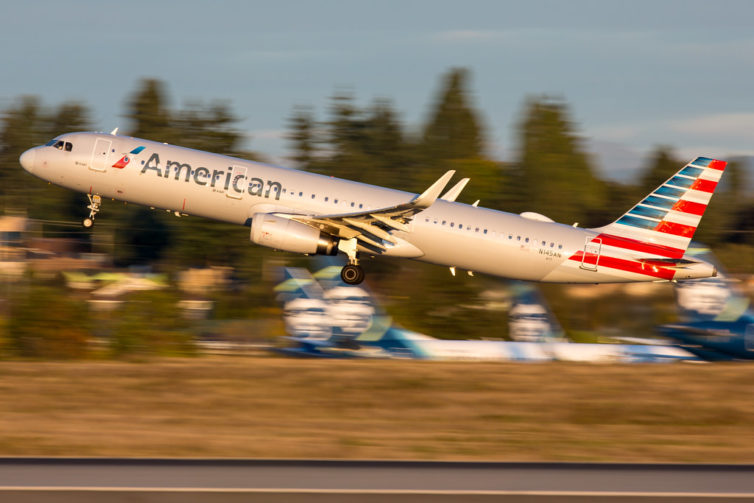 An American A-321 seen at golden hour. Photo: Jeremy Dwyer-Lindgren

My offer was pretty straight forward. I would be granted provisional gold status for roughly three months. The promo included ten 500-mile upgrades just for registering. And, if I could meet an EQD and EQM challenge, I would unlock gold through 2020.

I haven’t paid American Airlines much attention in recent years. With some room to experiment with other airlines, I happily registered and started with booking a trip to San Francisco to cover the Exabeam conference.

Stay tuned for future pieces in the series as I reflect on my travels as I fly American Airlines as a gold elite member.

If you are loyal to Southwest you have to be loyal to Boeing like me.

So you will never try any other carriers Airbus…..

Thanks for reading! Most of my #AvGeek life Iâ€™ve been a Boeing guy but as Iâ€™ve aged (and flown other carriers) Iâ€™ve come to accept Airbus and the other guys. These days I really donâ€™t care, unless itâ€™s a CRJ or 145 which I try to avoid. Alas, itâ€™s hard to â€œdoâ€ AA and avoid thoseâ€¦

Said another way, should Southwest add some diversity to the fleet, thatâ€™d be OK in my book.

Southwest Airlines is unquestionably my preference for all flights whenever possible. A better title for the article would be that you are â€preparingâ€ to test American Airlines. I look forward to actual results as opposed to the teaser that this article was.

I was AA Execplat for 15 years and then left them for SWA about 7 years ago. I’ve never looked back.

AA is so poorly run these days (so I read), but I dropped them in 2014, because the loyalty program lost its value to me. I could never use the points for reasonable award redemptions … which is tough to take when you’re doing over 120K butt-in-seat-miles. As AA raced to the bottom with the small lavs and less-legroom seats, etc, etc, it wasn’t hard to ‘not look back’.

For SWA, it’s hard to beat the value/usability of the points, Companion pass, and flexibility. I feel like I’ve got full flexibility when I go on vacation….an endless pile of points that I can use without outrageous redemption values. A really fair deal….and one that I take advantage of all of the time.

Thanks for reading! Excellent perspective, I appreciate you taking the time to comment. You make completely valid points and I expect this may foreshadow my own findings. That said, Iâ€™m not fully switching teams, just experimenting for the sake of a diverse experience.

Best of luck to you. I received the same trial for gold status with aa. I flew twice, not being able to use any of the upgrades because the system was so full of everybody else they gave those trials to. After the experiences of those flights I emailed their customer service, and vowed to never cast a shadow on their jetbridge again. Don’t regret it at all. I’ve had my ups and downs with United, but I feel I get the best mile for my dollar traveling with them.

I was execplatinum on as I left them for Southwest. I haven’t looked back. They matched my status and have big seats. They endorse exit row safety. I trust them. Iade a website dedicated to unsafeamerican.com I will never fly them again.

First impressions are lasting impressions. In January of 1967 I was flying from Syracuse to Clevland on one of the old prop planes. As we took off from Syracuse they started serving a beautiful BREAKFAST of OJ and waffles and sausage, then I was asked if I was flying standby and I said yes, they yanked the breakfast away, no breakfast for standby. I flew home on leave 7 months later on AA and asked the gate agent if standby would receive lunch and I was told yes. While lunch was being served I was told no lunch for standby military. I know this was 52 years ago, but I still remember as a young GI how AA treated me twice. SW is my airline

Starving an active duty GI is not the best of customer service. I too had one of those experiences many years ago, but it wasn’t on American Airlines.

Good luck trying to use any of those 500 mile upgrades. I’m Gold-for-life and have been for like 15yrs. About 6 or 7 years ago I bought 10 of those 500 mile upgrades for a roundtrip DCA/PHX/DCA trip. I was only able to use half as I couldn’t get upgrade on 2 of the 4 flights and I’ve never been able to use them since…with Gold status, you’re only eligible for confirmation if seats are available 24 hours prior to a flight, and with Plat. and Exec. Plat. folks eligible WAY further out than that…well…they’re pretty useless, especially living as I do now in a hub city (PHX)…too many of those higher-tier peeps who get the upgrades before us lowly Gold’s. That’s my only real complaint about AA though (aside from the fact that those purchased, unusable 500 mile upgrades are non-refundable!!!!), they are my airline of preference…needless to say having Gold status for LIFE is a major reason!!

AA lost my business years ago. I was in uniform with my wife and four month old daughter. We had just arrived in the US on a very long flight from the middle east. They announced boarding for elderly and those with small children. The gate agent refused early boarding to us. I was in uniform with a baby. The baby never cried from PHL to DFW.

Thank you sharing this informations

Looks nice, but I have a prefer for Quatar Airlines

AA is undoubtedly excellent, but as discussed above, the service standards have been dropped a little. And AA is loosing it’s historic reputation now a bit. You also must go through this fact. As per the official figures, the profit is $769 million last year which is almost 75% rise from previous figures of $437 million. This increasing need will be resulting in recruitment of 400 pilots on board. They will divide equally between Alaska Airlines and Horizon. Also, about 300 in-flight attendants, approximately 1000 passenger service agents, 450 ground staff along with nearly 100 technical supporting staff and some other positions will be fill this year in 2020. This is quite a very big figures since the commissioning of this Alaska Air. Possible posting areas will be Seattle and Portland and some of them on the less crowded airports.