SDF may not immediately come to mind when considering airports of particular significance in the aviation enthusiast (AvGeek) community.  However, as home to the UPS WorldPort, the nerve center of UPS worldwide operations, the airport sees UPS freight birds with commonality as one might expect Southwest 737s at Midway. Any average airport might see a few UPS movements per day typically in the mornings or nights; SDF sees hundreds all throughout the day. For this reason alone, a trip to SDF is worthy of addition to the #AvGeekToDoList. 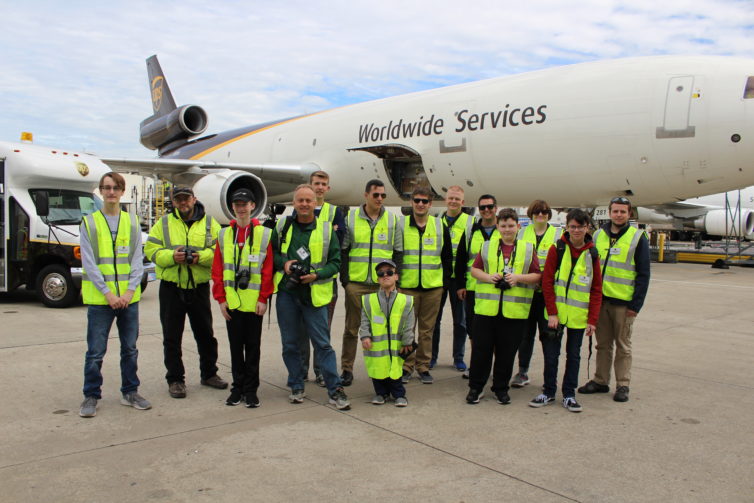 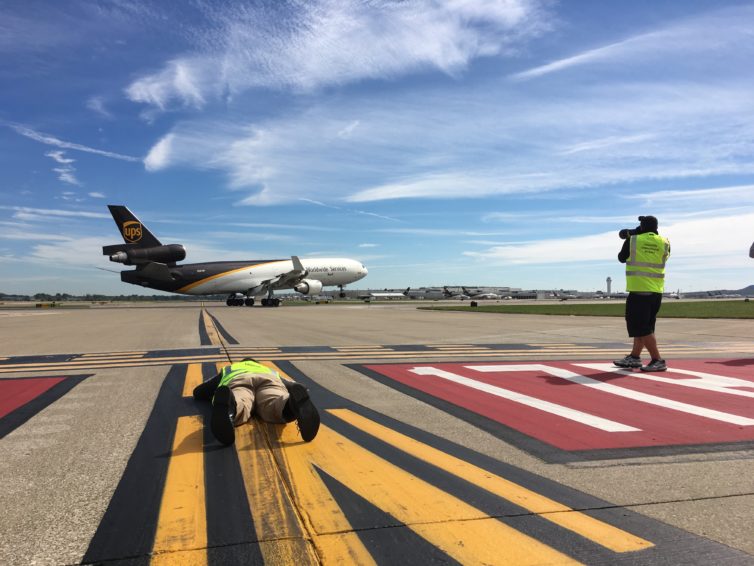 By now I hope you are on board with why SDF is a AvGeek/PlaneSpotting destination of note. But how is SDF’s airport community engagement unique? Somewhat recently, new leadership was installed across the operation. The airport is taking a new, more friendly and inviting approach. Inspired in part by the success of NYCA’s successful #SpotLAX events, SDF has committed itself to periodically opening the gates and letting AvGeeks get up close and personal with aircraft. The events are simply called #SpotSDF, wherein folks are invited to spend the day networking and PlaneSpotting from the field.

I recently connected with Anthony Gilmer, SDF’s Director for Marketing & Air Service Development. He happens to be one of the masterminds behind recent spotting community-centric efforts.

We hope to grow it into at least a quarterly event and something that spotters across the country would come to town to experience. [Author’s note: I did this!] The best way for those outside SDF to get involved is to follow us on social media and watch out for when we post about future events. We completely embrace the AvGeek community, as many of us at SDF are AvGeeks ourselves. Spotters are always welcome here.

Good things are happening in Louisville. Keep them on your radar, friends. 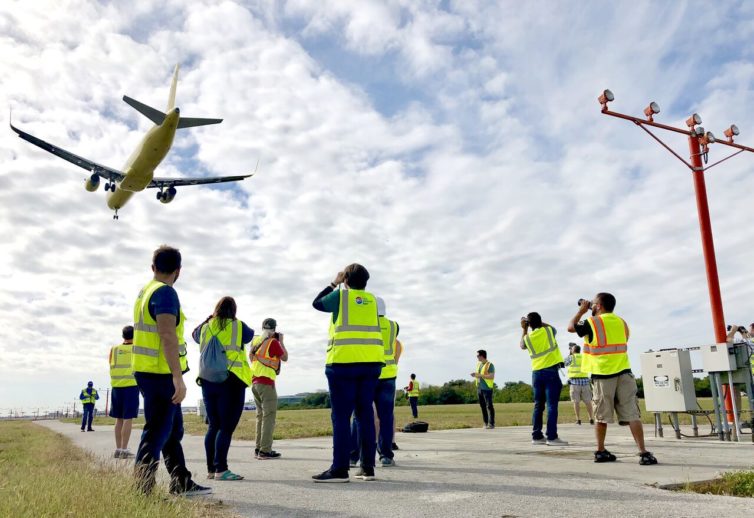 Tampa has long been known by the AvGeek community as being friendly to PlaneSpotters. TPA scores well on the diversity and “interesting” scale, with a nice mix of traffic from all over the world.

TPA has begun hosting events and opening their doors to local enthusiasts as well. In addition, TPA hosts a Facebook group called ThePlaneSpot with close to 1,000 members. The group is a bit restrictive in that posts must be approved by the hosts. However, the fact that the airport has proactively sought to create a space for enthusiasts is impressive. The group sees high activity where local enthusiasts network, engage, and share photos which TPA sometimes features in their social media campaigns.

The Tampa community is one that has long embraced PlaneSpotting. Indeed, the airport’s CEO is a self-declared AvGeek and plane spotter. I reached out to Ashley Iaccarino, TPA’s Communications Coordinator, who read me into TPA’s airport community engagement efforts. The airport first opened their gates to spotters last July. They have since hosted another event and plan to continue to pull from ThePlaneSpot and other areas to try to rotate participation. The AvGeek community down in TPA seems to be well engaged with the local police force, which also is reported to be comprised of aviation enthusiasts. 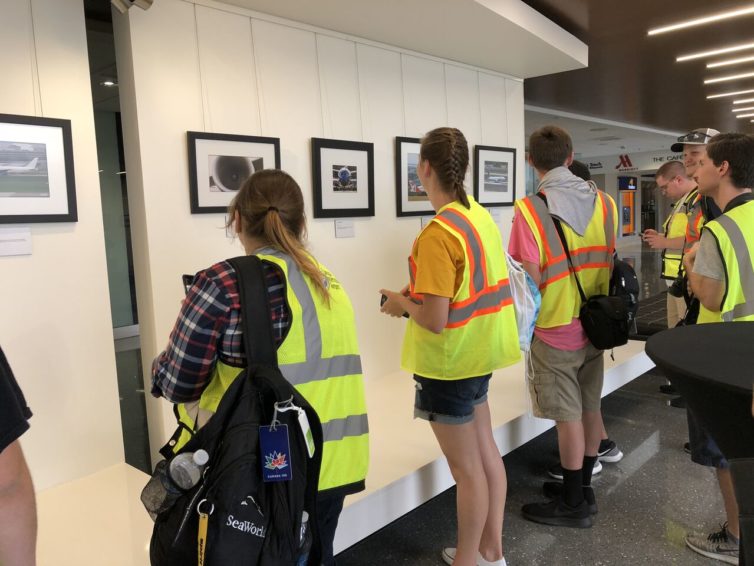 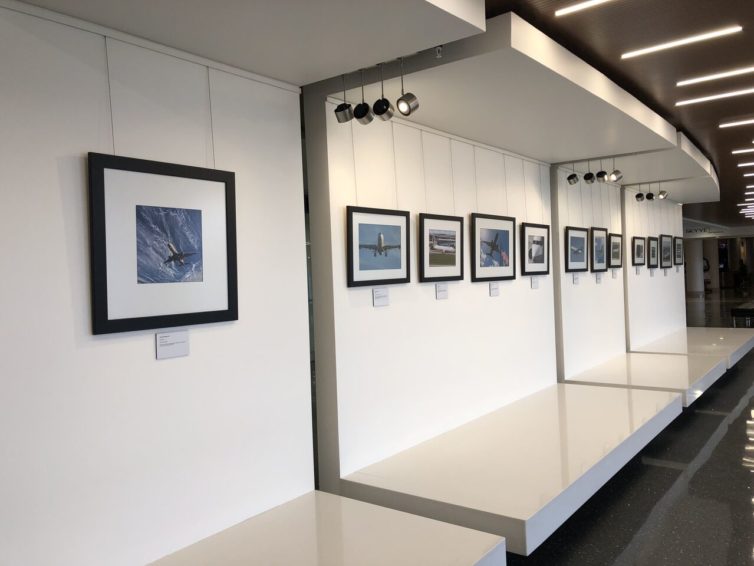 A selection of AvGeek art on display in TPA’s gallery – Photo: TPA Airport.

For one event, select works from those in attendance were printed in high quality and put on display in one of TPA airport’s public art galleries. This particular display was between the main terminal and the airport Marriott. The exhibition came as a welcome surprise to event attendees. While the display was up for an extended period, it came down last month. Twenty works of art were featured.

Tampa seems to be on to something with their approach to airport community engagement; other airports should try to recreate this in their own communities.

Airports have always been magnets for aviation-inclined and even the random observer. In today’s security-oriented society, it is easy to overreact and implement harsh and burdensome policy regarding plane spotting. There is a balance to be struck in inspiring aspiring aviation-inclined youth, accommodating hobbyists, and maintaining general security. It is a known fact that the more friendly eyes you have, the stronger the security. Louisville and Tampa have found solutions that work for their communities. These are not the only accommodating airports, but ones that have pushed the envelope particularly hard and are looking to establish real relationships. And for that, they deserve praise.

Are your airports friendly to the enthusiast community? If not, perhaps use this article as a nudge. If yes, tell us in the comments what airport community engagement practices they have which you find to be value-added.

Flying Like A King In Finnair’s A330 Business Class Throne Seat
Dash-Ten Out of Ten: United’s 787-10 Inaugural From SFO to Newark
11 Comments

Over the years here at GRR the airport board and administration have actively pursued community engagement. We have an excellent viewing area which was recently expanded to include “real” restrooms, a covered picnic area, new picnic tables, and expanded paved parking. It’s extremely popular to say the least. As our air traffic numbers continue to rise, there’s more and more to spot.

YVR has done some great work as far as community engagement is concerned. Their “Spotters Picnic” has become a great event for enthusiasts and people passing by!

That being said they can definitely improve in certain areas. I don’t know why airport security seemingly insists on making enemies of the spotters. It’s amazing that they feel the need to ask us what we’re taking pictures of. Blows my mind everytime

TPA police still harass plane spotters. Hopefully one day the airport will enlighten it’s own police force that harassing spotters isnt good for business. A more fair way of selecting spotters to go on these secret tours would also be nice as this is a publicly owned airport. Everyone should have an equal opportunity to go on the tours and not just the friends that mr. Valentine picks.

RDU has a nice aviation park with playground equipment, viewing area and ATC on speaker for everyone to hear.

My home airport is dying a slow death from airline mergers and Connecticut state bureaucracy. Don’t even roll down your window and take a cell phone picture at BDL or you’ll be harassed almost instantly.

Great article. I’m a Board member of ORD Airport Watch, based in Bensenville IL. Our group is well-received by the airport as well as the businesses in the surrounding communities. We actively work with the airport authorities as well as law enforcement to ensure our members can enjoy their hobby.

Dulles airport has been amazing to us spotters. Besides occasional ramp tours during special events (organized via social media so everyone can attend them), MWAA police is nicer and they stopped harassing spotters. The airport understands that we are providing free advertisement on countless of websites and on social media. I’m happy to read that SDF is spotter friendly now! Time to start planing trip from Washington DC to Louisville for some quality “heavy” spotting 🙂

I bet our friends at SDF would love to hear of a trip just for spotting. Be sure to reach out and say hello, maybe the planets will align!

ORD Airport Watch has several members that spot at SDF while on vacation or just as a road trip.