These were my first two flights on a CRJ-200. While I enjoyed the dual cabin configuration of the much larger CRJ-900, the -200 was pretty cramped for my 6’1’ 200+ lb frame. Tucking my laptop bag under my seat meant playing footsie with my seatmate, but on a full flight, this was my only choice. The flight was at least long enough for the cabin crew to pass out snacks and coffee. 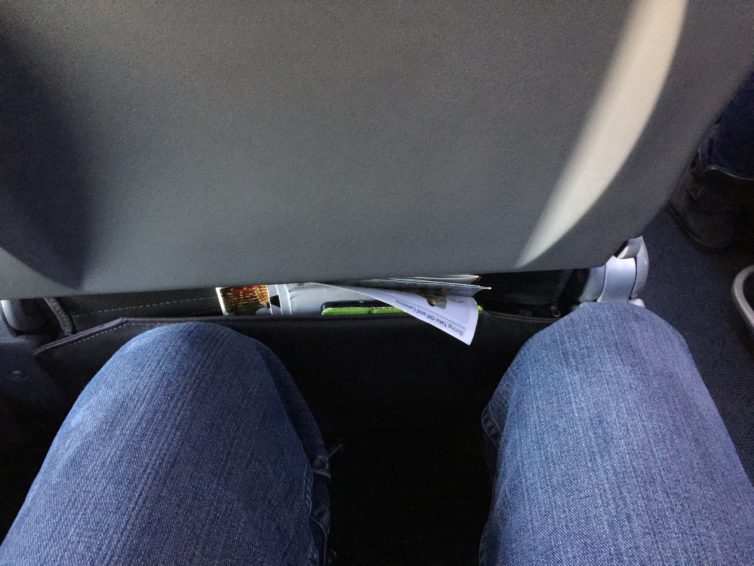 After a civilized breakfast and a mediocre, overpriced Bloody Mary at O’Hare (seriously, what kind of savages put a lemon and lime in a Bloody Mary, but not a celery stick?) I made my way onto my ride to Boston. The economy flight from Chicago to Boston was on one of American’s older 737-800s, replete with creaking drop-down IFE screens playing some mind-numbing selections of NBC’s ’œfinest’ sitcoms. Tip for flying domestic on American: bring your own devices, unless you’re very sure you’re going to be on a newly configured aircraft. More on that later. 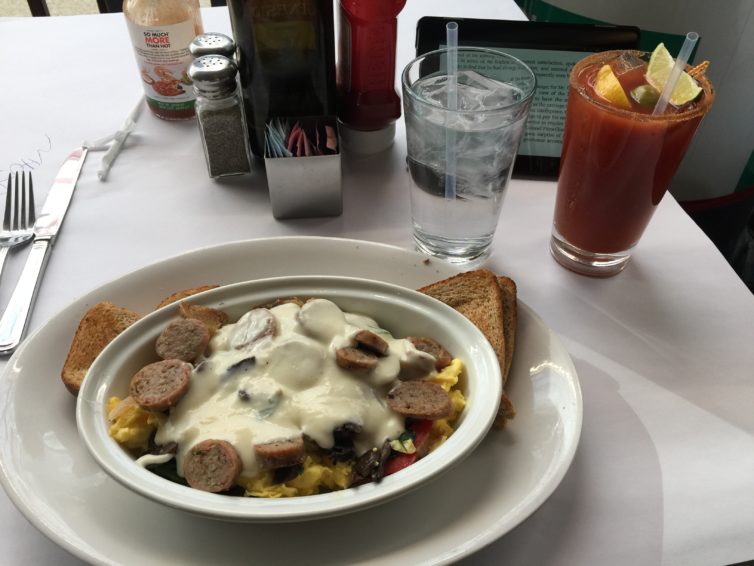 At least the meal was good. Overpriced, but good.

After a long, but extremely enjoyable conference, it was time to head home via the longest side route I’ve ever booked. Weather systems can be pretty unstable in early April, a fact emphasized by my needing to coach my wife through starting our snow thrower for a surprise April storm while waiting for my flight to depart Boston. I could have really tempted fate by cutting my connections closer, but felt like I was pushing my luck as it was. 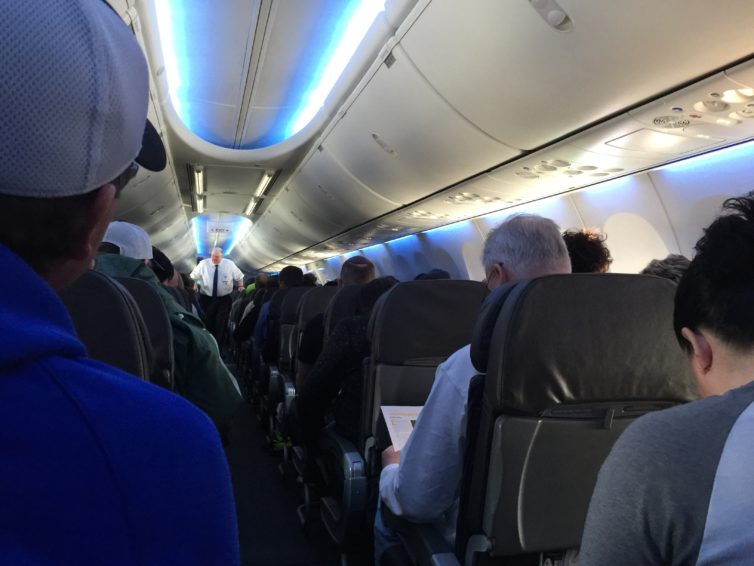 I really like the Sky Interior, even in the back of the plane

The first flight of the day was Boston to Charlotte, on a very tired ex-US Airways A321. American says they plan to upgrade the cabins on these aircraft in the next couple of years, but for now they seem to operate them on high-density short-haul routes. This was, unquestionably, the most underwhelming First Class experience I’ve ever had.

On a two-and-a-half-hour flight, I didn’t expect a gourmet three-course meal, but I do have to point out that Delta’s regional partner manages to serve a full lunch on a three-hour flight in a CRJ-900. On a lunch flight that left before 1:00 pm local, all American would muster for the sixteen of us in First Class was crackers, grapes, and cheese, with a bit of chocolate for a chaser. At least the cabin crew kept my drink full. 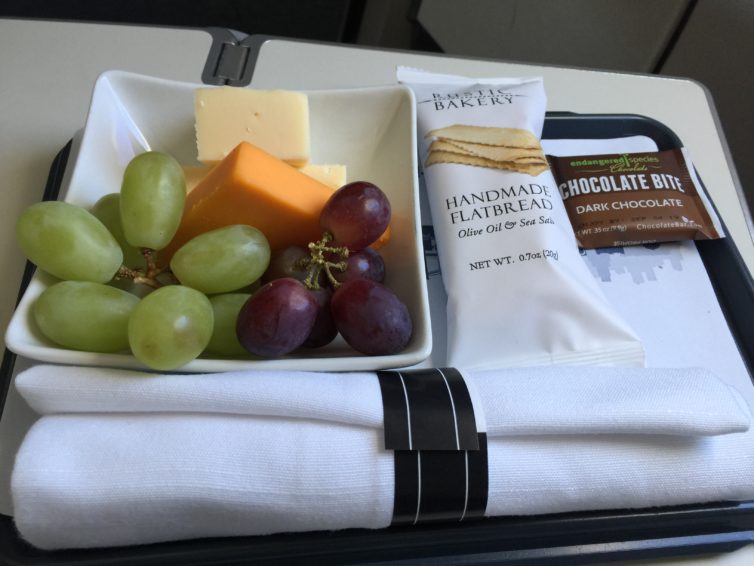 Somehow, this is a First Class meal

Having accidentally left my book in my laptop bag, which was stuffed three rows back in an overhead bin, I had plenty of time to contemplate the IFE options available on the A321. Zero. This particular aircraft didn’t even feature the creaky drop down screens of the older 737-800s. American makes a big deal out of their integrated, free Wi-Fi entertainment options available to anyone with their own device. That didn’t work either. Despite a reasonably new Apple iPhone, I couldn’t connect to anything beyond American’s basic web portal. There’s supposed to be a button in American’s app that allows users to connect to the IFE options directly from there. While I consider myself reasonably proficient at working with software interfaces (it is my job, after all) I couldn’t find the entertainment options. In short, my in-flight entertainment options boiled down to the included flight magazine, and the window. And most of the Eastern Seaboard was overcast. 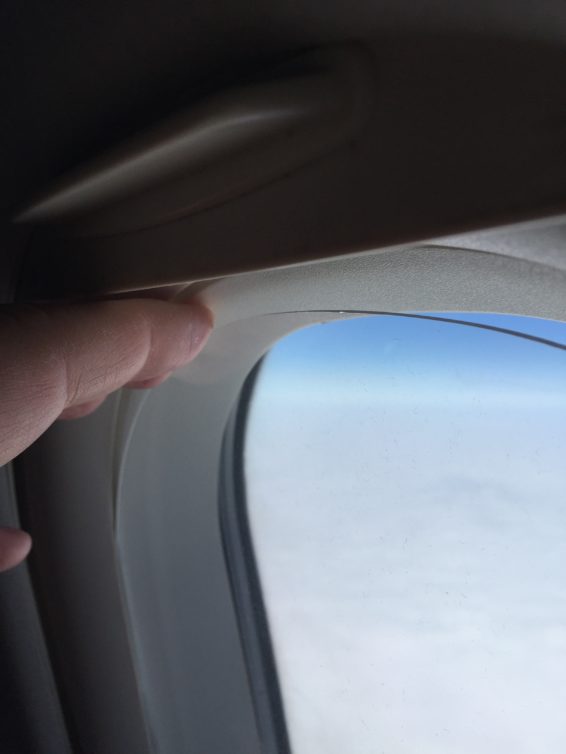 This is perfectly safe, but still not something you want to see

Arriving on time at Charlotte allowed me to easily make my connection, and complete my trifecta of visiting all three U.S. airports with questionably inappropriate three-letter designators. Boarding my second flight of the day felt like a breath of fresh air. The Charlotte to Chicago 737-800 must have been one of the last ones ordered by American. The psychological difference that the Sky Interior makes in feeling like you have more headroom is hard to explain, but it’s definitely there. And the screens! Each seat had an individual IFE screen loaded with enough movies and games to keep even the pickiest of people happy for any flight within North America.

My favorite part of the IFE was the synthetic cockpit view that gave a faked representation of the view from the front office. However, as a gamer, I had to at least check out a few of the game offerings. The remote control for the IFE has a neat trick where one side works like a TV remote, while the other side flips and contains a D-Pad and buttons for use with the included games. The game selection isn’t anything spectacular, largely consisting of popular mobile apps such as Angry Birds, and brain games like Sudoku. A partnership with Nintendo, Sega, or Atari would do wonders to at least bring in some classic, recognizable games; however, as something to keep kids occupied when their Kindles run out of power, the games are certainly adequate. As a game reviewer, I’ve certainly played worse. 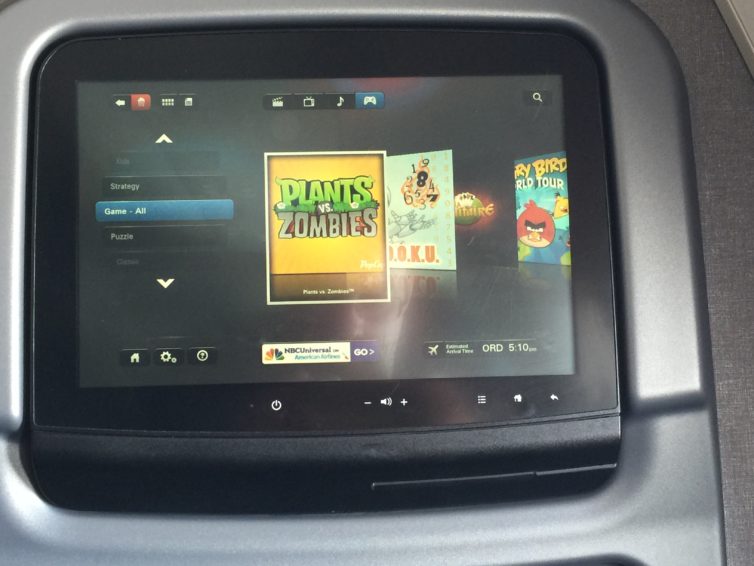 Probably the nicest built-in IFE I’ve ever played with

I have no comments or pictures of the snack served on the two-hour flight. That’s because there weren’t any. I’ll give American the benefit of the doubt and say that maybe the cabin crew did a snack pass while I was napping, but considering that the cabin crew was fantastically attentive to the levels of my drink, I doubt I would have missed it if they did.

A couple of hour layover at O’Hare allowed for some planespotting before shuffling onto another Air Wisconsin CRJ-200 for the final leg home. More of the same from the previous week, though with a surprise reminder from the tired flight attendant that it was against federal regulations to open your own bottles of alcohol on board the flight. I hadn’t heard that one before!

The biggest issue I had with American on these flights was the wild inconsistency of both their fleet, and their product. The A321 I flew on was old and creaky ’“ that can’t always be helped, but seeing a finger-sized gap between the top of the inner window and the fuselage of the aircraft while sitting in Seat 1F doesn’t inspire warm feelings of confidence. The 737-800 was so new that it practically still had that new plane smell, but the 737-800 I’d flow on my outbound leg hadn’t received any such cabin upgrades. Not having any idea of what you’re getting on a flight makes it difficult to plan personal entertainment choices. Add to that a Bring-Your-Own-Device (BYOD) app that just plain didn’t work. Aside from the complimentary alcohol, the food service had me seriously question why I’d bothered to upgrade from economy at all. 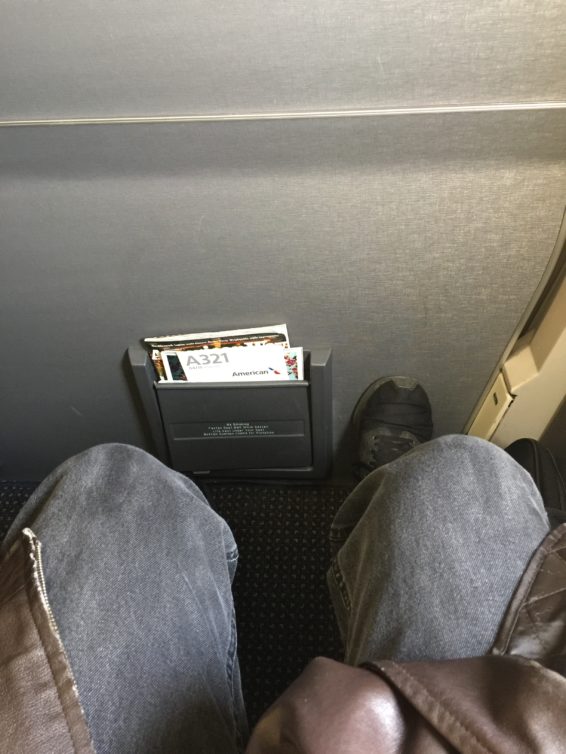 Bulkhead seat was poor planning on my part

Running single-class CRJ-200s as a feeder to my home airport doesn’t help either. It’s not that I didn’t like the little jet, but given that Delta runs mainline service to their Minneapolis hub, I’m much more likely to choose them in the future, even if it means paying a slightly higher price than American.

None of this should reflect poorly on the cabin crews, however. On every flight, particularly in First Class, the flight attendants were fantastically attentive. One item in particular stands out ’“ on my flight from Charlotte to Chicago, the combination of lack of sleep, long travel day, insufficient hydration, and overly generous alcohol consumption had conspired to give me a massive headache. With my ibuprofen bottle tucked in the belly of the aircraft in my checked luggage, I made a slightly desperate ask of a flight attendant. His response put me forever in his debt: ’œI can’t give you any, but if you should happen to come to the front galley in a couple of minutes and find an open, unattended bottle and a glass of water, you can help yourself.’ Way to put people first!

Really, the simple fact is that I can’t justify the price of a First Class upgrade on American’s domestic product. The service upgrade just isn’t there, I can’t upgrade my entire trip, and the price difference between them and the competition just isn’t enough. I just might have to be a little more careful with my TSA approved carry-on bag of ’œin-flight amenities.’

CORRESPONDENT - SOUIX CITY, IA. Aaron is a blogger, game streamer, and software test engineer currently living beneath the traffic pattern of South Dakotaâ€s busiest commercial airport. Heâ€s been obsessed with aviation ever since his first flight at age four, and can frequently be found on his Harley re-enacting the motorcycle vs F-14 race from Top Gun with the ANG F-16s flying from FSD.Â

I didn’t realize that had changed. Looking at Wikipedia’s entry for Air Wisconsin, it says that they changed over to only being a carrier for United at the end of March. I guess I must have caught one of the last Air Wisconsin CRJ200s under the American Eagle brand then! That’s kind of an interesting footnote, because you’re right, booking a flight out of FSD on American now shows that I would be on either a CRJ-700 or a CRJ-900 operated by either SkyWest or Mesa and branded as American Eagle.

I call that a plus, because both those birds have at least a small First Class section.

I am curious, what are the 3 airports with questionable codes?

That would be Charlotte, Pensacola, and Sioux City. 🙂

Props to that flight attendant!!!

And yes indeed, as “Michael” said above…props to that F/A for your ibuprofen!!! I find AA cabin crews to be excellent, especially the legacy US F/A’s.

Oh man, how could I forget about FAT? I”ve flown out of there too, which was actually my first First Class upgrade experience.

Best part of that was sitting in my seat with a Bloody Mary in my hand, listening to the sweet music of a pair of transient F/A-18s take off while we were boarding.

It”s the consistent mediocrity of flying in the USA that startles. I can remember when nobody did it better than you guys. That was some time ago.