When the Air Italy brand launched earlier this year, they announced their goal to disrupt the Italian market, and create a â€œcredible alternativeâ€ for Italians. From their home base of Milanâ€“Malpensa Airport, Air Italy intends to offer both short- and long-haul routes. The airline will shortly be launching flights to the United States, with a daily service to New York (begins 6/1) and four-times-per-week service to Miami (starts 6/8). The next planned long-haul destinations for Air Italy are Bangkok and Mumbai, with service start dates yet to be announced. 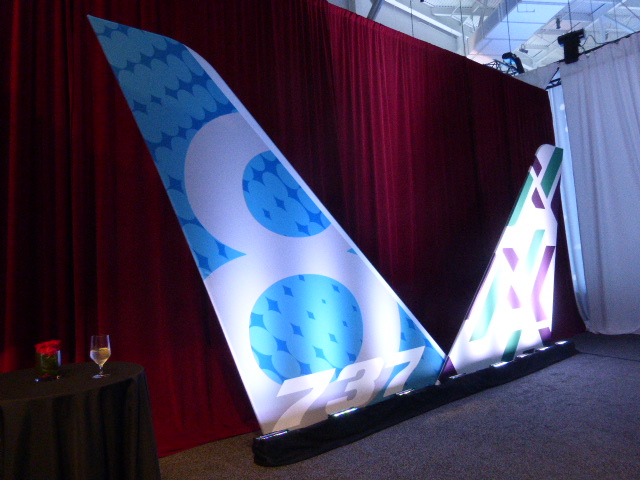 Boeing sure rolled out the Red…er Maroon Carpet for the delivery – Photo: Colin Cook

This aircraft is the first of 20 737 MAX 8 aircraft that Air Italy will receive, with a total of eight of the type to be delivered this year. The plane is laid out with a total of 186 seats in an economy and premium economy layout. While there is a premium section, the cabin is basically entirely economy, as the premium economy section features the same seats, only with the middle seat blocked out. This is a pretty common trend throughout European short-haul routes, with carriers such as British Airways, Air France, and Lufthansa offering a similar configuration.

When Mr. Al Baker was asked how Qatarâ€™s investment in Air Italy is different than Etihadâ€™s investment in Alitalia, I knew some fantastic sound bites would be coming. He started by saying that he wanted to talk â€œabout successes, not failuresâ€ (nice jab there), and proceeded to boast about how well Qatarâ€™s investments have performed. They have invested in IAG in Europe (parent of British Airways, Iberia, Aer Lingus, Vueling, and LEVEL), LATAM in South America, and Cathay Pacific in Asia. Mr. Al Baker went on to say that Italy does not presently have a strong airline, pointing out that Alitalia is in bankruptcy receivership proceedings, and again committed to making Air Italy a dominant airline within Italy. 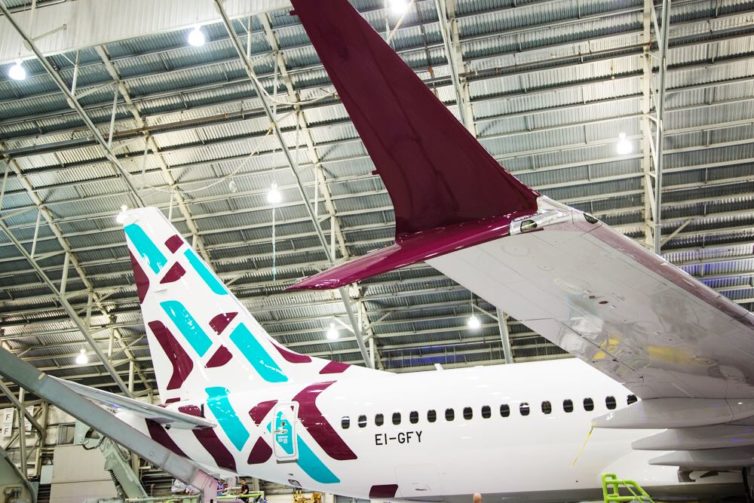 Air Italyâ€™s connection to Qatar is quite apparent, as their livery features the same maroon used by Qatar Airways – Image: Air Italy

Air Italy has a very aggressive expansion plan, and they certainly seem to know it. In addition to the 20 737 MAX aircraft, they also have 30 787-8 aircraft on order, all to be delivered by 2022. Their ambitious growth plans include a goal of carrying 10 million passengers annually, within five years. For reference, Alitalia carried an estimated 22 million passengers in 2017. Until the Dreamliners start to arrive, Air Italy has leased five A330-200s from Qatar, with the plan to return the Airbus planes and become an entirely Boeing operator. 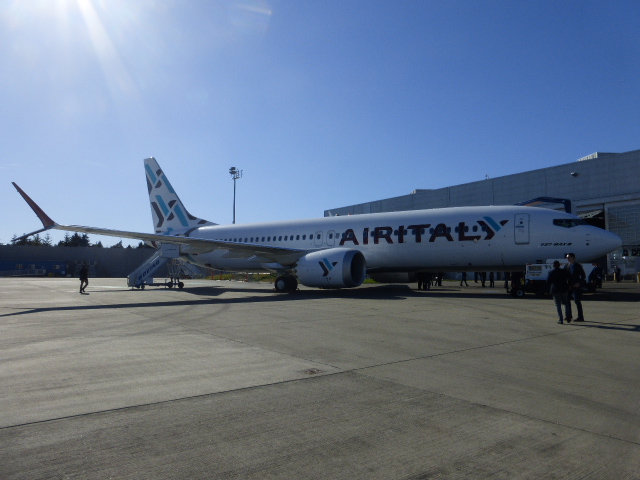 With such a massive expansion push, it will be some time until the airline makes a profit. When asked about profitability, Mr. Al Baker said the priority is to establish the airline as a major carrier first and foremost. He said that they are determined to be a great success, and are not immediately concerned with making a profit. He went on to say that the airline plans to create a profit sharing program, whereby employees receive 20% of the profits. While thatâ€™s great news for employees that they plan to offer profit sharing, it will likely take several years for that to materialize. 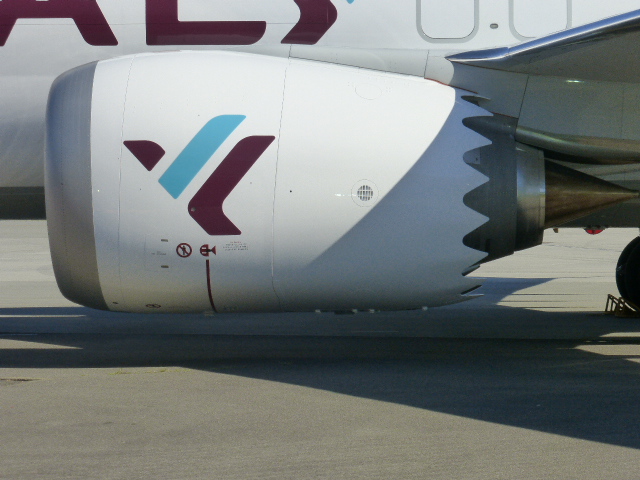 The engine on the 737 MAX is noticeably bigger. And comes with the awesome chevrons like the Dreamliner. – Photo: Colin Cook

Mr. Al Baker provided another awesome sound bite when he acknowledged that he and Qatar Airways can be tough to work with. As part of his comments, he said â€œIâ€™m sure you know that we are a very difficult customer.â€ That remark resulted in more than a few chuckles around the room, as Qatar has historically been rather picky about their aircraft deliveries. Last year, Qatar refused to accept aircraft from Airbus, as they reportedly didnâ€™t meet Qatarâ€™s standards. Boeing’s Senior Director of International Communications & Media Relations, Bernard Choi, did his part to smooth Mr. Al Bakerâ€™s comment by commenting â€œQatar is not a difficult customer, they just know what they want.â€ Nicely done Boeing. 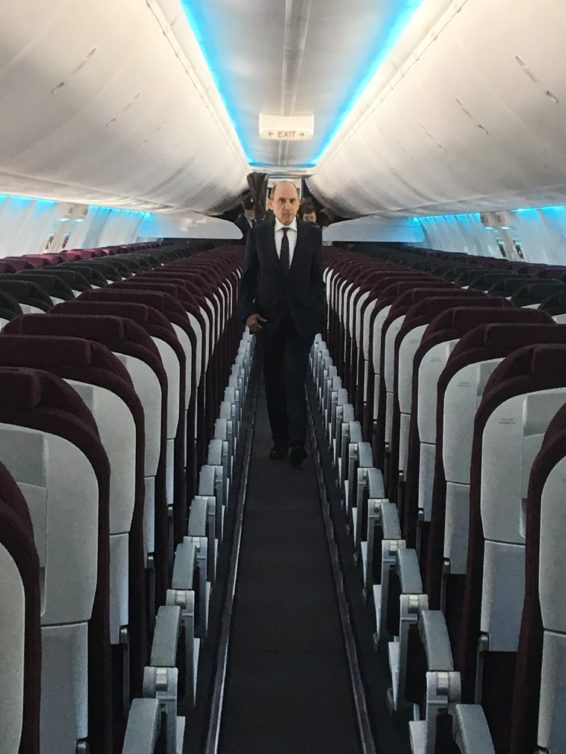 Following the delivery ceremony, we had the opportunity to go on board the 737 MAX and check it out for ourselves. Kudos to Boeing and Air Italy for giving us nearly an hour to explore both the inside and outside of the aircraft. I found the interior to be very similar to the 737 Next Generation series, which makes sense, as Boeing wanted to maintain much of the same commonality with prior 737s. The seats seemed to have approximately 31 inches of pitch, which is also fairly standard. While a typical AvGeek would likely know they are flying on a MAX, the layperson would likely just see it as another 737. 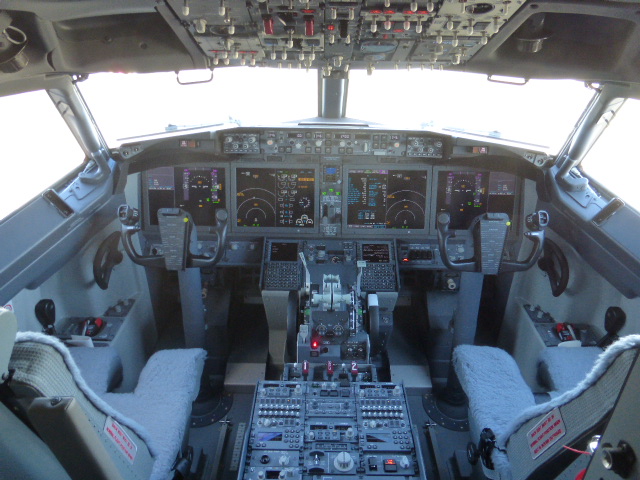 Flight deck on the 737 MAX. Only real difference from 737 Next Gen is the large display screens. – Photo: Colin Cook

It was clear throughout the event that Air Italy is committed to growing their brand and presence across the world. With the troubles of Alitalia, there is an opportunity within the Italian market for Air Italy to become more than a niche carrier. The airline is certainly not bashful about the opportunity, and stated their desire to become Italyâ€™s number one carrier multiple times. Their biggest difficulty will be to gain traction, and be able to fill all the aircraft they will be receiving over a short time period. If they are able to execute on their strategy, there will be another solid option for air travel within Italy and beyond. Itâ€™s clear that all stakeholders including Air Italy, Qatar Airways, and 51% owner Alisarda, are extremely committed to making the airline a success. We wish them luck and would definitely consider flying the airline in the future. 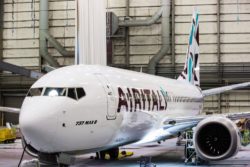 Nice angle on this beauty – Photo Courtesy of Air Italy 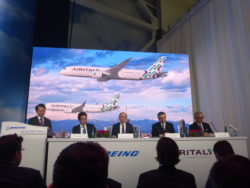 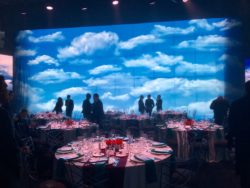 It’s always a classy affair when Qatar Airways is involved. Hint: There’s a 737 behind the clouds! – Photo: Colin Cook 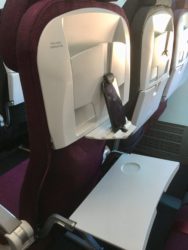 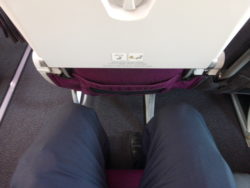 Leg room might be a little tight for longer flights – Photo: Colin Cook 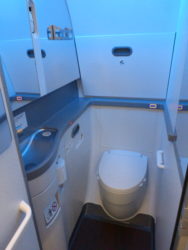 The lav seemed to be normal size. Unlike some airlines that are installing tiny lavs on their 737 MAX – Photo: Colin Cook

https://www.airlinereporter.com
Come Fly With Me, on The Delta A350, Domestically!
Alaska Airlines’ new 737-700 freighters provide “lifeline” for many Alaska communities
2 Comments

That cabin would certainly send me in search of another airline.

The foremost reason for that Mr. Al Baker said the priority is to establish the airline as a major carrier first and foremost. He said that they are determined to be a great success, and are not immediately concerned with making a profit. He went on to say that the airline plans to create a profit sharing program, whereby employees receive 20% of the profits.