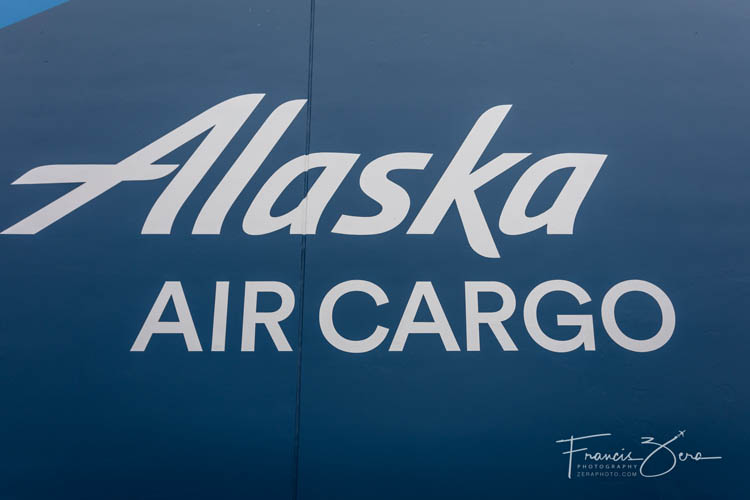 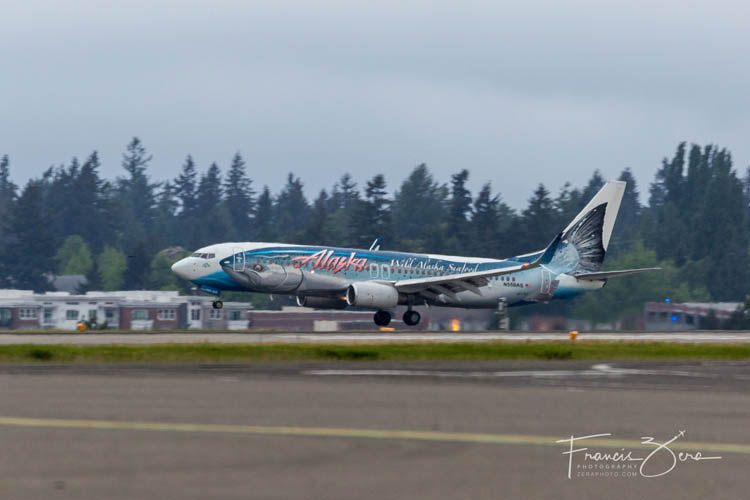 We have touchdown for the flying fish at SEA!

We arrived to the Alaska Air Cargo facility at Seattle-Tacoma International Airport (SEA) a bit before 6:00am. The 737 carrying the fish was scheduled to arrive at 6:30am, but it already looked like it might be delayed. That was okay; they had some coffee there and I always enjoy chatting with airline folks. Soon I heard that the Salmon-30-Salmon would be the aircraft flying the first fish to Seattle. Awesome.

This would be a new one. A few years back, they had the first generation Salmon-30-Salmon sitting on the ramp for photos (pre-beard, more hair, and younger me in front of it with CEO Brad Tilden in 2009), but this would be the first year for the salmon plane to be flying the first salmon. So meta. 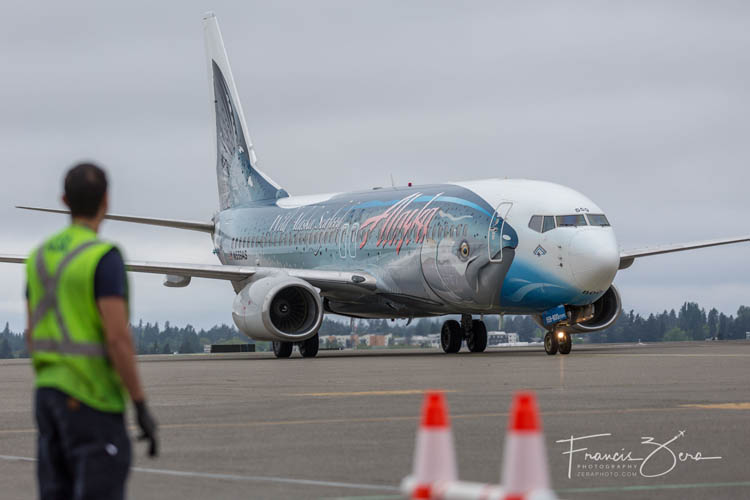 The arrival of the Salmon-30-Salmon

Soon it was time to be lead out to the ramp to set up for photos for the arrival of the Copper River salmon. It is a beautiful bird… er fish.

It didn’t take long for the 737 to park and the red carpet to be rolled out. The front door was opened and the captain came out and held the first massive fish in the air. 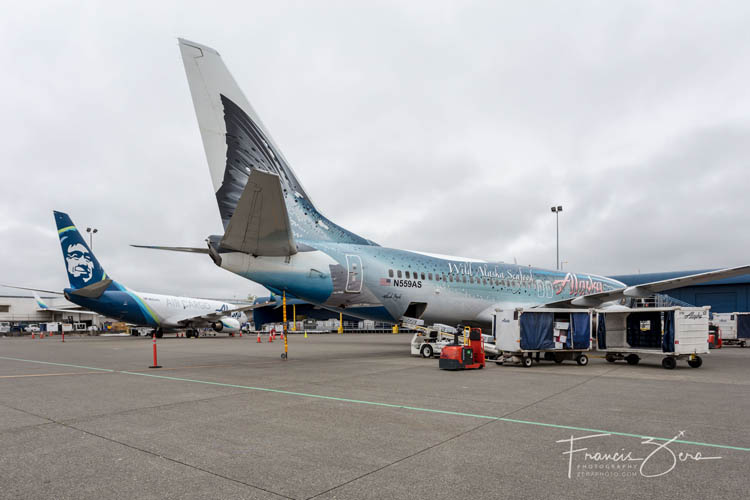 Sure. The fish IS impressive, and the event was there to celebrate the fish, but Francis and I were hoping to hang around the flying fish a bit longer (aka the plane).

It didn’t take long before Francis found his way playing with the fishy cargo coming off of the Salmon-30-Salmon! Makes sense — the guy digs cargo opsÂ and it not afraid to get in the middle of it (safely of course).

From afar it is beautiful, but getting up close, you can see all the smaller details, like the speckled winglets and scales on the fuselage. This is one of my all-time favorite liveries and even with the gray sky, it still seemed to sparkle! 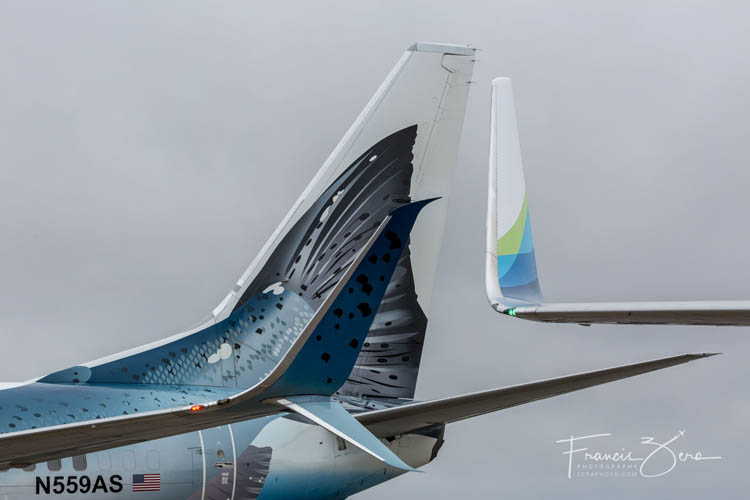 At the tail end of our Salmon-30-Salmon exterior tour (see how I related that to the pic above — yea, I know, funny stuff), I was asked “did you also want to check out the 737-700 Freighter?” Oh heck yes!

At last year’s event, I was able to take a nice tour of the 737-400 Combi that delivered the fish and two years ago, I actually flew on the Combi to follow the fish back down to Seattle (omg, that was awesome). So, I was very excited to add the first 737-700 to be converted to a Freighter.

The 737-700 is not a large aircraft, but when converted to a Freighter it looks like it holds its own. If you have more interest in learning about how Alaska Airlines uses this aircraft, then please check out Francis’ recent story:Â Alaska Airlines’ New 737-700 Freighters Provide “Lifeline” for Many Alaska Communities. Great info and plenty more pics. 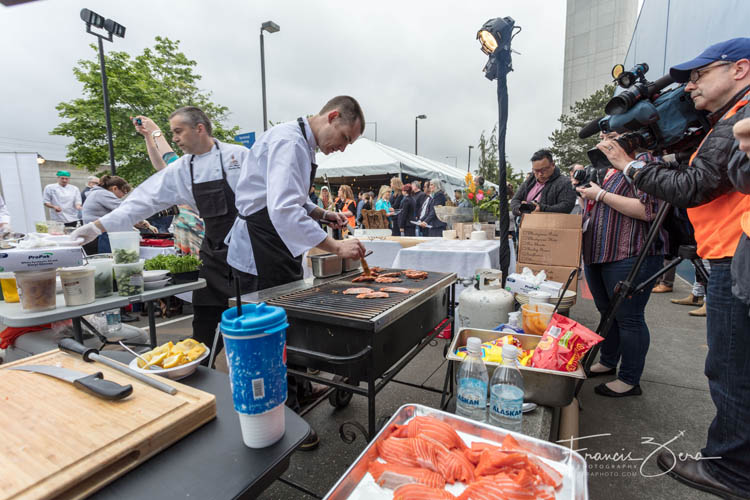 Ohhhhhh right… the event. We almost forgot with all the great airplane action going on. We were told that we probably missed the start of the cook off and I was totally okay with that. I think the others with us were too. Hey, we still had plenty of time to watch, smell, and taste. In the end, Chris Bryant, executive chef ofÂ WildFin American Grill was chosen as the winner. I have to agree, his fish dish was the most delish!

We didn’t get the name of the gentlemen with that super sweet Alaska Airlines holiday sweater, but he was one of the guests that won it. Lucky guy! Looking forward to next year, which will be the 10th – amazing how quickly time flies!

Fishy falls for it EVERY year…

With the 787-10 Vistara will be able to offer services to any destination in Europe and Asia and almost all of Australia and Africa. It is unlikely that Vistara poaches on its parent, Singapore Airlineâ€™s turf, and operates to Australia in the near to medium term, though we cannot rule it out. The gulf and Thailand markets can be served by single aisle A320s. The 330 seat capacity 787-10 will be well suited for dense routes like