Air Canada’s Signature Suite, its newest lounge at Toronto Pearson International Airport (YYZ), officially opened on December 1.  The Signature Suite creates an environment that makes it easy to forget you’re in an airport. Those eligible to access the lounge can receive complimentary beer, wine, champagne and signature cocktails. Complimentary food will also be available; passengers will be able to dine a la carte from a menu created by Vancouver-based celebrity chef David Hawksworth.

I arrived at T1, Air Canada’s main terminal, and was met by event staff to be checked-in. Since I was not flying that evening, I required an escort after passing through security. The first security officer escorted me to a departure point where I was driven by Air Canada’s chauffeur service between the domestic and international gates. 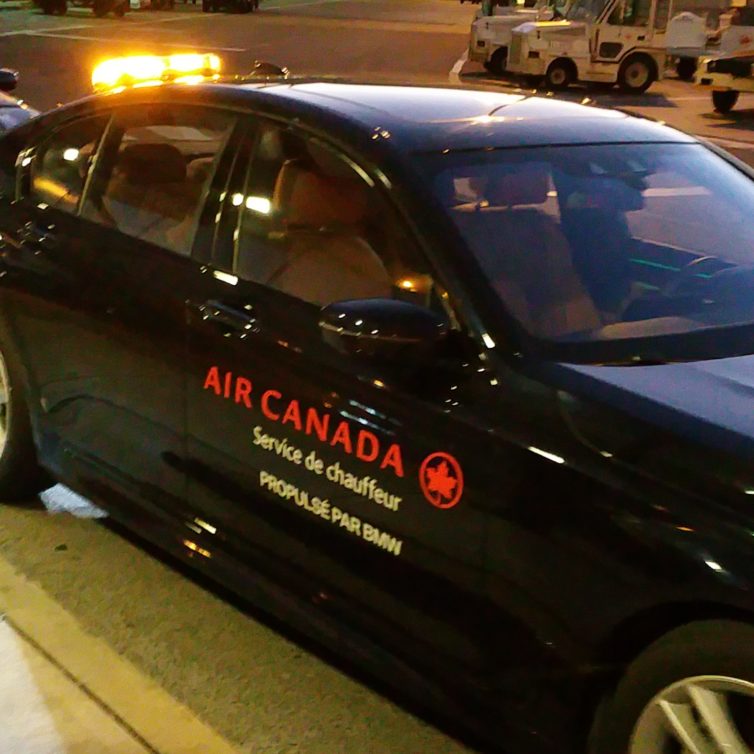 Air Canada offered media members its chauffeur service to transfer us from the domestic gates to the international gates at T1, where the new Signature Suite lounge is located – Photo: Jonathan Trent-Carlson

The driver made their way around the terminal building, giving great ground-level views of the various planes in Air Canada’s fleet. When we got to the international gates, I was escorted up to Air Canada’s Signature Suite.

After passing through the entrance and checking my coat, I immediately forgot that I was in an airport. The walls had overhangs to distract from the vaunted terminal ceiling. A chandelier in the middle of the central room kept my focus inside the lounge. There were also various areas that surrounded the main room, where the bar was. 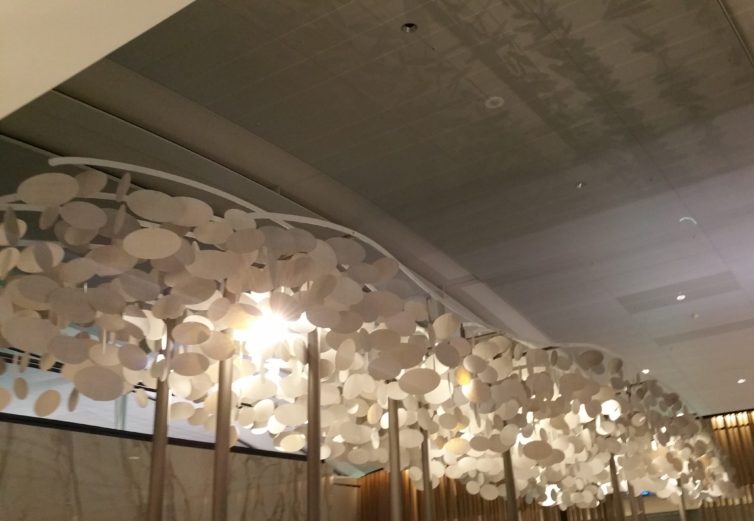 This Cloudscape Chandelier by Toronto design firm Moss & Lam helps you forget you’re in an airport terminal. However, if you do look up, it casts interesting shadows on the ceiling – Photo: Jonathan Trent-Carlson 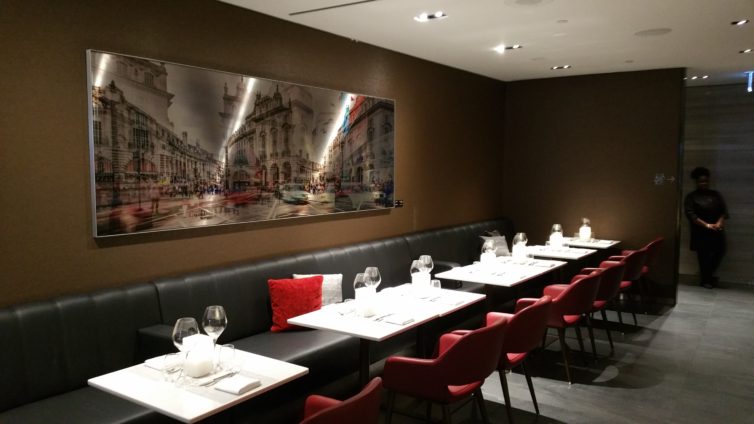 This is part of the dining room behind the bar in the Signature Suite. The picture on the wall, of Picadilly Circus, is by Montreal artist Nicolas Ruel. – Photo: Jonathan Trent-Carlson 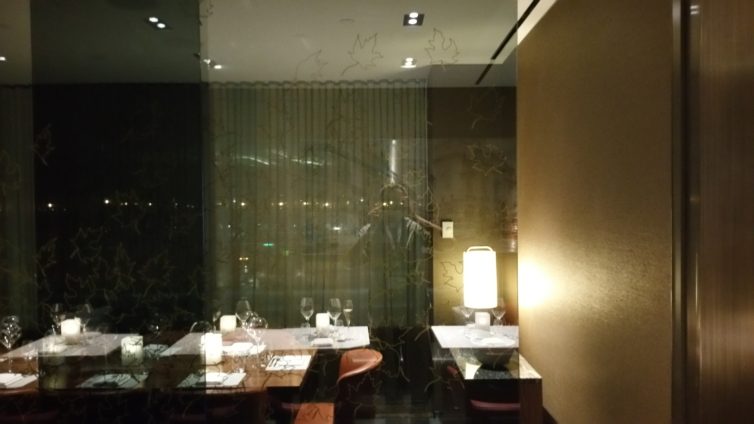 A sliding glass door with bronze inlays of maple leaves blowing in the wind. This helps passengers who may need or want an extra bit of privacy. – Photo: Jonathan Trent-Carlson

After wandering around and checking out the various rooms, it was time for a drink. Passengers in the Signature Suite will have their choices of complimentary beverages. These include 10 different beers on tap, including a rotating craft beer.  You can also choose a glass of wine from Canada’s Niagara region, or champagne. Signature cocktails are another offering, and for my first drink I chose the BlackBerry Royal. 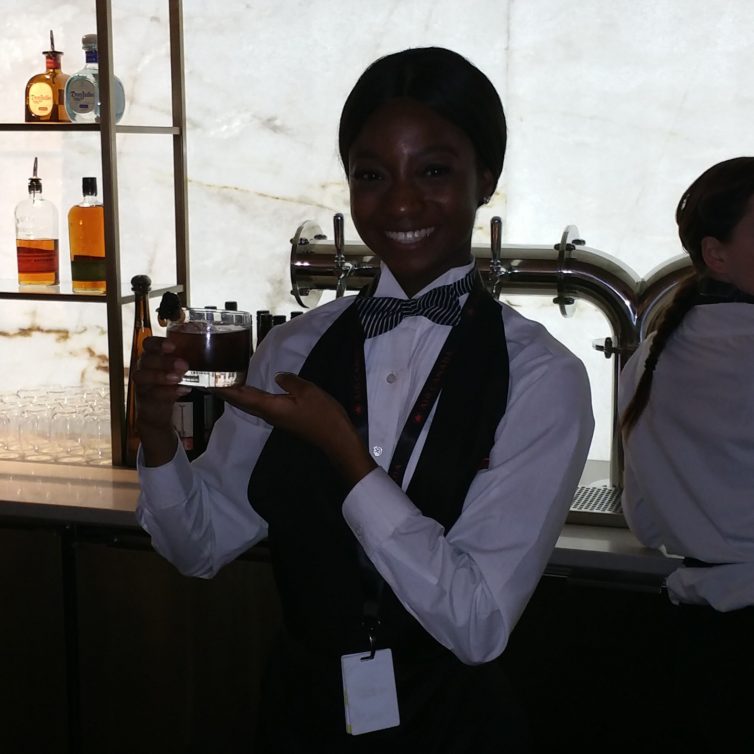 Canadian Rye and maple syrup combine with vanilla and muddled blackberries for an exclusive treat. Pictured is the artist who created this drink, Alfreda Addy. – Photo: Jonathan Trent-Carlson

With my drink in hand, I ambled over to a table and started talking with some of the people involved with creating this lounge. First up was Chad Clark, operations director with the Hawksworth Restaurant Group. Based in Vancouver, celebrity chef David Hawksworth worked with Air Canada to design the menu for the lounge. For this event, the menu items were arranged buffet style for us to sample (my recommendation: the split pea falafel). 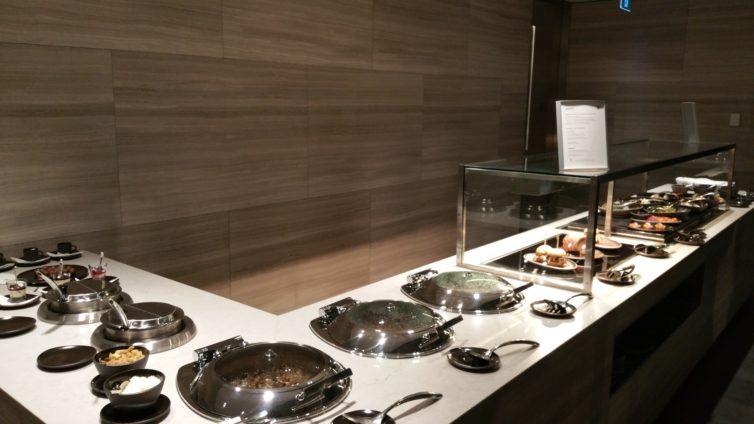 The full menu was displayed buffet style for the event. Per Andrew Macfarlane, the buffet will feature grab-and-go items for passengers who don’t have much time. Those with longer layovers can order complimentary food from the a la carte menu. – Photo: Jonathan Trent-Carlson

Clark mentioned how they wanted to showcase not only Canadian fare, but also Asian-inspired options for travelers to or from destinations in the Far East. At this time a server offering hors d’oeuvres came by and handed me a sample of Korean fried cauliflower. 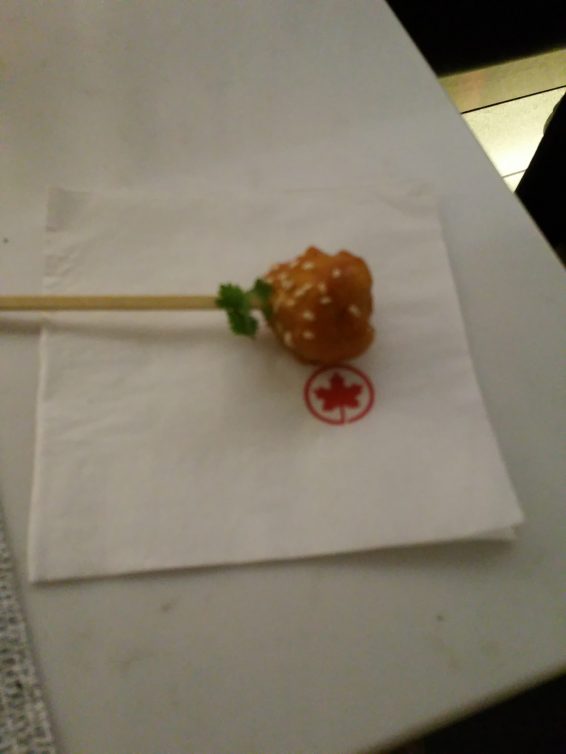 Korean fried cauliflower, one of the many hors d’oeuvres that will be offered to passengers – Photo: Jonathan Trent-Carlson

After I finished my food and conversation with Clark, next up was Gavin Lynch. Hailing from Ottawa, Lynch was the creative genius behind the mural on one of the Signature Suite’s walls. The mural is of a winter scene in a pine forest. However, Lynch threw a creative curveball into his work. Rather than painting branches with green pine needles, he instead used other colors to represent the branches and pine needles. Lynch stated that it took him over six weeks to paint the mural. 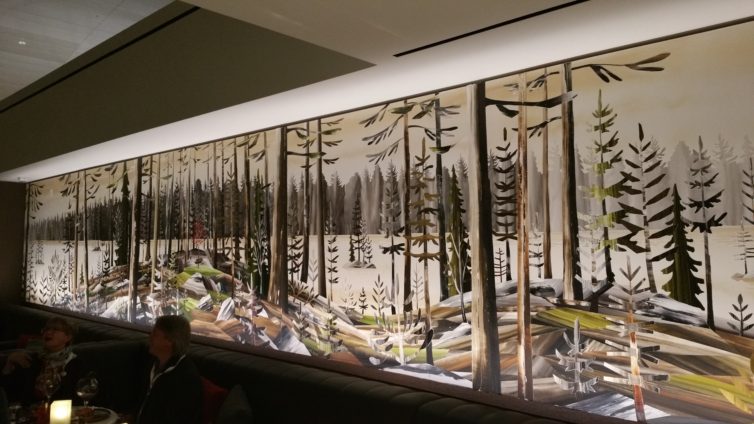 Gavin Lynch’s mural on one of the walls of Air Canada’s Signature Suite – Photo: Jonathan Trent-Carlson

Once Lynch had moved on to talk to others, it was time to order my second drink. This time I had the Muskoka Maple. This drink has Bulleit bourbon, maple simple syrup, fresh pressed lemon juice, ginger ale. It was garnished with a lemon wedge and a sprig of thyme. 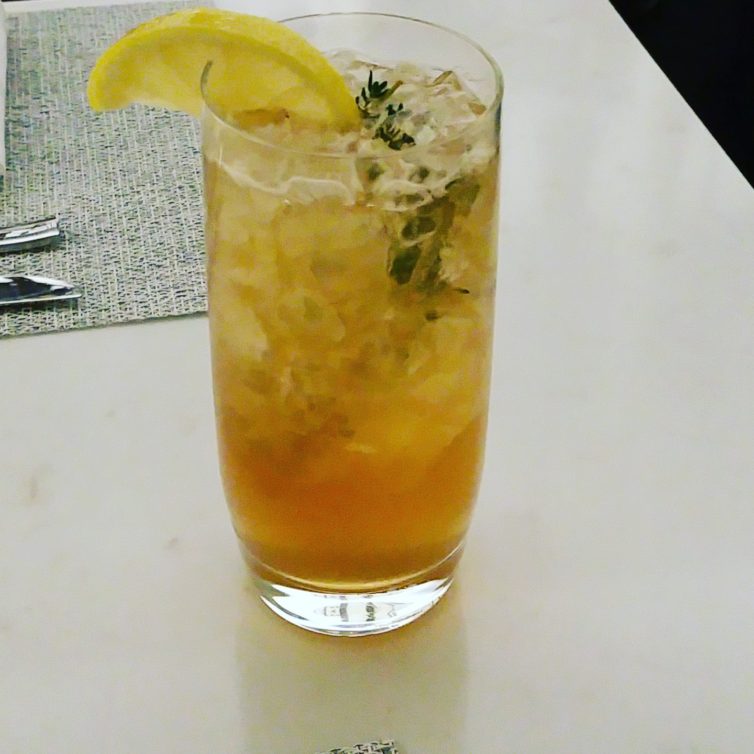 As I was sipping on my drink, Air Canada Airport Product Design Manager Andrew Macfarlane walked by and I was able to sit and talk with him about the lounge.

“Air Canada’s goal is to become a top-ten global carrier,” Macfarlane stated. “When you look at those top ten global carriers, those are the Cathay Pacifics and Emirates of the world, and we benchmark ourselves against them. We ask ourselves what does a business class customer desire. What do we need to do elevate that customer experience?” 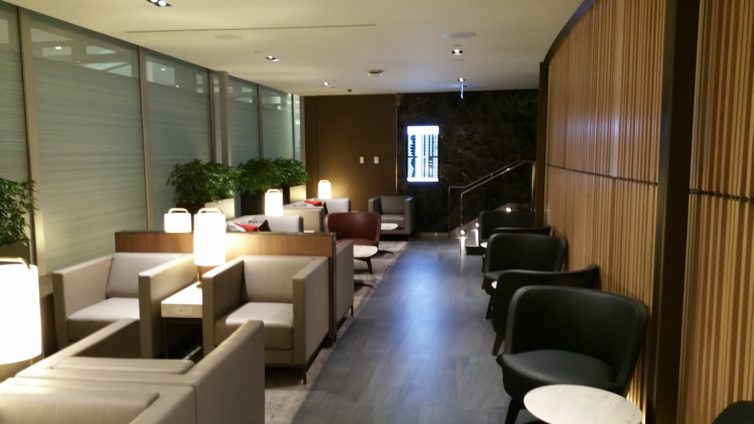 This room off to the side provides a quieter place to work or relax. The consoles all have power outlets to charge your devices – Photo: Jonathan Trent-Carlson

He went on to mention that Cathay Pacific has five different tiers of lounges and that was the inspiration for Air Canada’s Signature Suite. “What you will find here and what you are seeing here tonight is a full service, five-star-restaurant dining experience. All our staff is very attentive to a customer’s needs and wants, but as well as to notice the fine details. Some of those fine details might be if a lady orders a cocktail, and she has lipstick on, they are to also offer a straw. Or if you drop your servlet they are to offer you a clean one even before you know you dropped it.”

I then asked about showers, as I noticed there were none in the bathroom area. Macfarlane explained that those desiring a shower will be escorted to a shower area, and if it was full they would be placed on a list and escorted when their name was called. 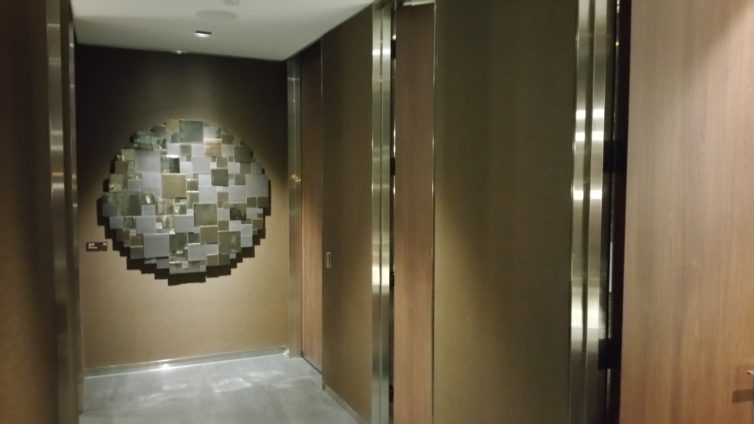 The bathroom area consists of several individual water closets. For those wanting a shower, a lounge worker will escort that passenger to a different area. – Photo: Jonathan Trent-Carlson

Macfarlane added that in Air Canada’s quest to become a “top ten” global carrier, they are using strategic advantages to capture additional market share. Nearly everyone in the U.S. flying to Europe or Asia is going to fly over Canada, and Air Canada’s Toronto hub is centrally positioned for many of those flights. The hub features U.S. Customs pre-clearance, so passengers continuing on to the U.S. from an international flight from Asia or Europe can clear customs and their flight to their destination will be considered a domestic flight. The biggest secret, that the airline wants to make known, is that you don’t have to recheck your bags to your final destination, like you would if you were passing through JFK or Atlanta. These competitive advantages are why the airline is aggressively expanding into the U.S., in order to capture more market share. 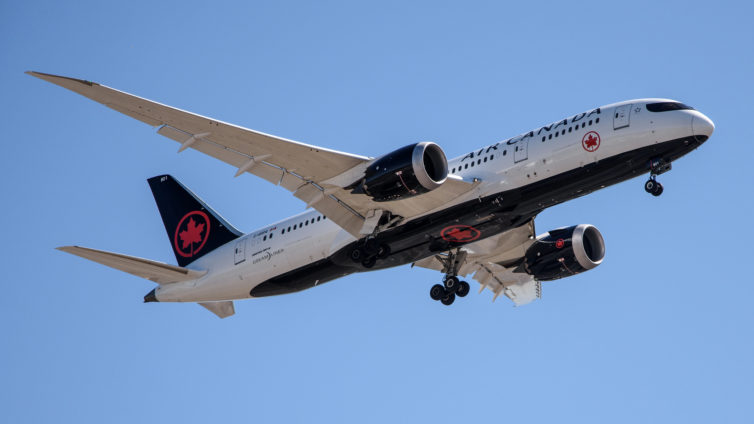 So who can access this lounge? “This is strictly Air Canada, mainline Air Canada paid business class passengers,” said Macfarlane. So if you would like to visit Air Canada’s newest lounge, you will need to buy a business class ticket to an international destination beyond the North American mainland. Your status, flying on a partner airline, securing a ticket with points/miles, or being upgraded will not get you into the Signature Suite, though you will still be able to access Air Canada’s Maple Leaf lounges.

After I finished talking to Macfarlane, I got up from my seat and mingled with some new friends I had met earlier that evening. I then took one last look around before being escorted to a BMW (Air Canada partners with BMW) that was waiting to return me to the hotel.

Air Canada’s Signature Suite achieves what few airline lounges can do, in that it makes you forget that you are in an airport and you feel more like you’re in a five star restaurant. The fact that it is exclusively for paid business class passengers on long-haul Air Canada flights should help to prevent it from feeling chaotic like other lounges can at times. If I were forced to pick only one lounge to visit for the rest of my life, I would probably pick this one.

Note: Air Canada provide travel and accommodations in order to cover this story, but all opinions are our own.

Behind the scenes with an agricultural pilot. “It”s just good, fun flying.”
The Mid America Museum of Aviation and Transportation – SUX it Does Not
1 Comment