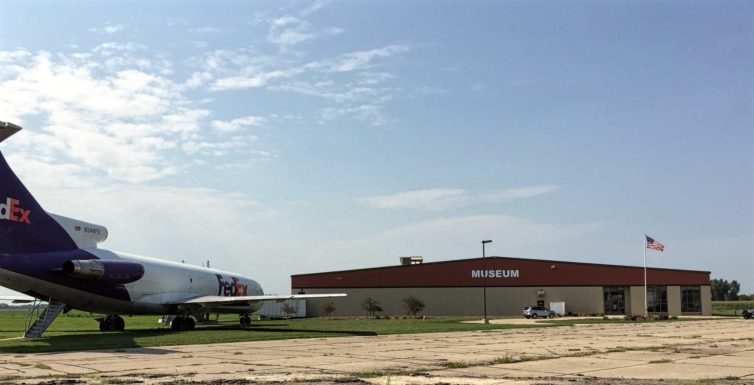 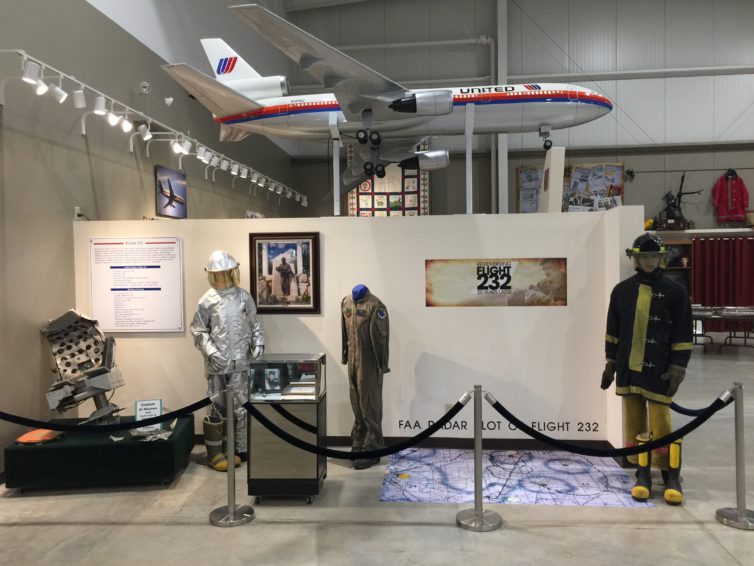 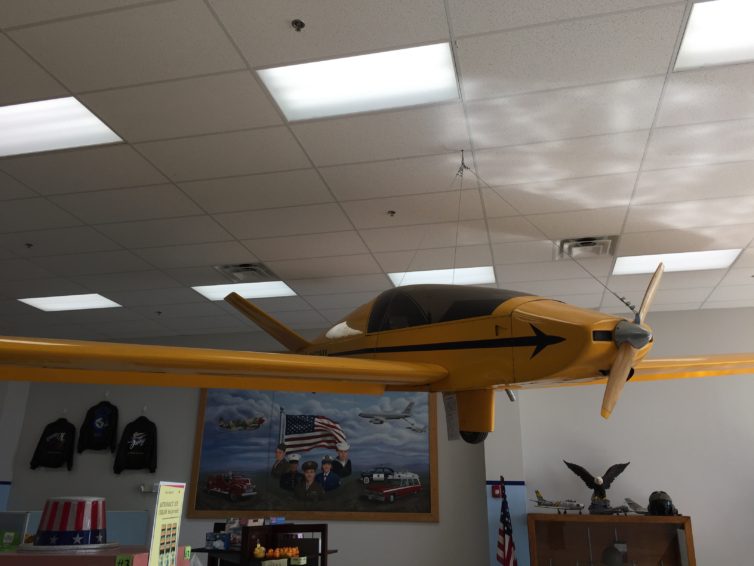 Past the turnstiles sits a chronicle of one middle American cityâ€™s largely unknown contributions to aviation history. In addition to an afternoon spent exploring both the museum and the airport, I had the fantastic opportunity to sit down with Larry Finley, Director of the Mid America Museum of Aviation and Transportation for some inside discussion about the history of the airport and the museumâ€™s collection.

Sioux Cityâ€™s aviation history dates back to the 1920s, a point that the museum works hard to chronicle. In the 1920s, Kari-Keen airplanes took to the skies of Sioux City, as a company that got started building storage boxes for early cars went into the airplane building business. By 1940, five different airlines were making regular visits to Sioux City, just in time for World War II to cause a massive building boom and create the footprint of the airport that now goes by SUX. 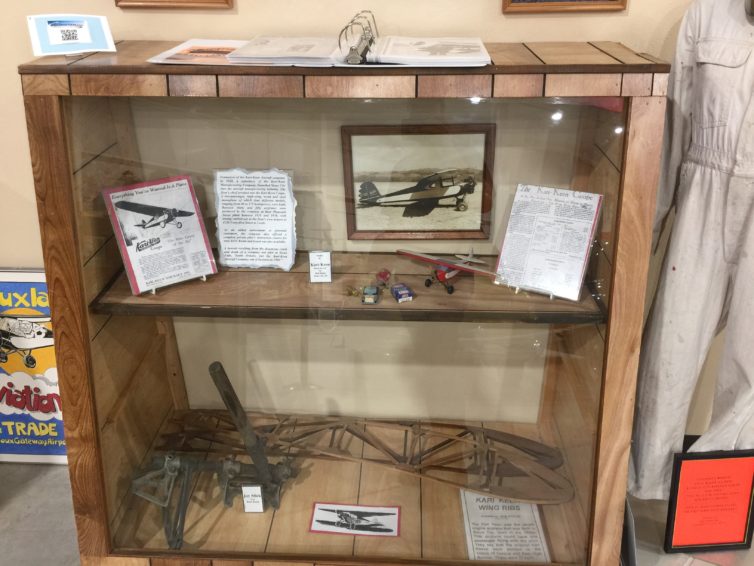 As the European theatre demanded ever more men and aircraft, Sioux City became the site of one of the Army Air Corpâ€™s bomber crew integration training centers. For four to eight weeks, crews would meet here from the various specialist schools all around the country to form into a single, cohesive unit. The Sioux City airport expanded to 10x the size, going from a 200-acre local hub to a sprawling 2000-acre facility that trained B-17 crews at first, then B-24 crews in 1943, and finally B-29 crews by the end of the war. 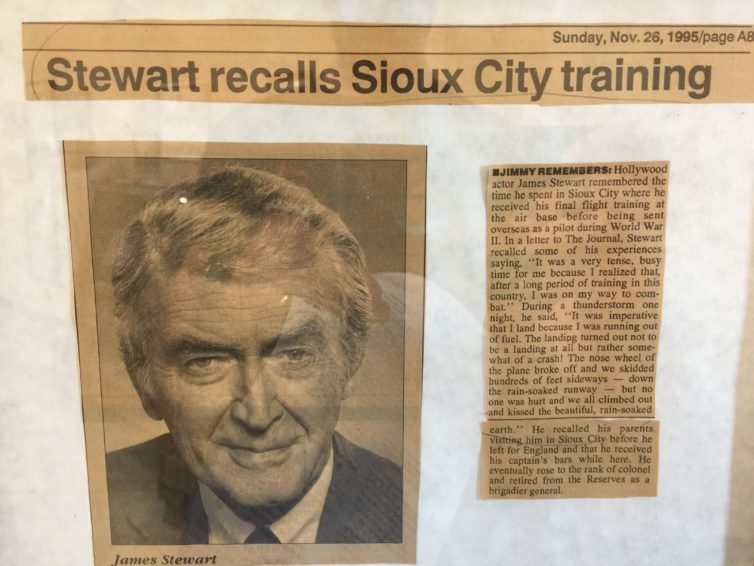 Jimmy Stewart and his crew did their integration training here – Photo: Aaron Giddings 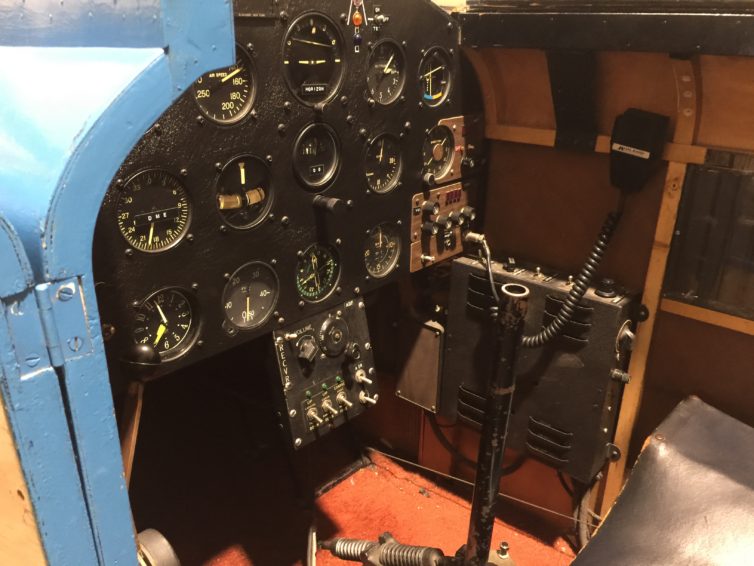 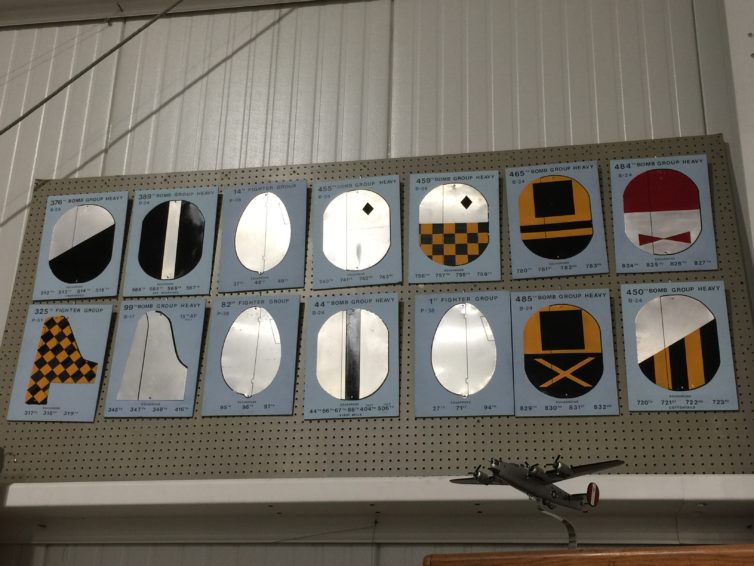 The museum has a neat pictorial of the different bomber squadrons that came through here – Photo: Aaron Giddings

In 1946, the Iowa Air National Guard formed, originally meeting in one of the airportâ€™s old B-29 hangers. Throughout the rest of the twentiethÂ century, the 174th Fighter Squadron flew a variety of aircraft, beginning with P-51D Mustangs, then F-80C Shooting Stars, F-84E Thunderstreaks, F-100C Super Sabres, A-7D Corsair IIs, and finally F-16 Fighting Falcons in 1991. During the same year that the unit began receiving their first Vipers, the genesis of the museum was formed.

Originally it was just a single building, barely outside the secure fence on the military side of the airport. When post-9/11 security restrictions made that location unusable, the museumâ€™s collected artifacts were put into storage while a suitable building could be found. The new site, safely located as far from the military section as possible, opened in 2010, sadly without the bulk of the previously stored artifacts. A pair of fires had served to demolish the majority of what had gone into storage.

What has been reassembled in the new building, however, is well worth viewing. Along with the papers and other artifacts chronicling the airportâ€™s history are a number of restored, drivable vehicles, a few operating aircraft, and some well-cared-for static displays. One particular highlight is a 1971 Chevy Camaro owned by a Sioux City local. Rebuilt and restored after three severely damaging events, the Camaro still gets taken out and run at least once a month. 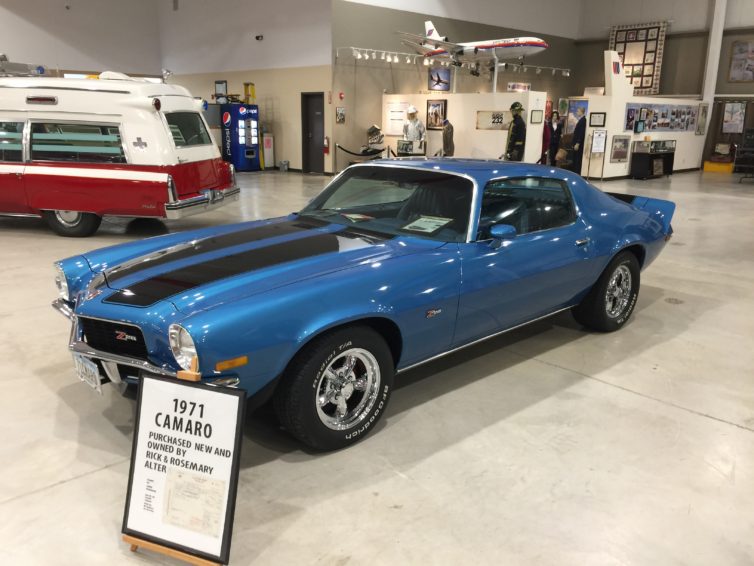 Another great sight is a mostly restored Vietnam era UH-1 Huey. Originally delivered to the museum courtesy of an Army training exercise (not the only resident to arrive that way either), their UH-1 was in pretty rough shape when it arrived. Years of volunteer work by a retired Army mechanic have paid off though, as she looks practically ready to take flight once again, if the museum could source an engine and if the Army would allow it. Barring that, perhaps a very large rubber band couldâ€¦ never mind, no one would ever believe that would work. 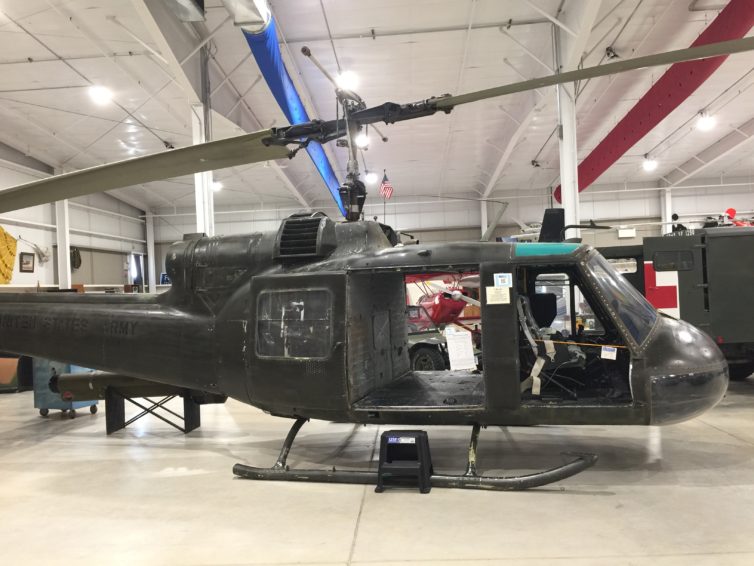 The museum also contains a section devoted to the crash of United Flight 232. The section is dominated at the top by a 1/12th scale DC-10 model that was originally used in trade shows. Along one wall is a timeline of the flightâ€™s events, along with photos and other artifacts from the crash, while the back wall contains the only mural recording all the passengers and crew on the flight who lost their lives in the crash. In addition, a video containing multiple news sources has been pieced together to give an excellent explanation of the events that day, and explains how Sioux Cityâ€™s past preparations helped reduce fatalities that day.

Sitting in one of the repurposed First Class seats that make up the video viewing area, itâ€™s difficult to not be touched by the video of that crash. Watching that footage again, at first glance itâ€™s amazing that anyone walked away from that event, much less a majority of the passengers and crew. 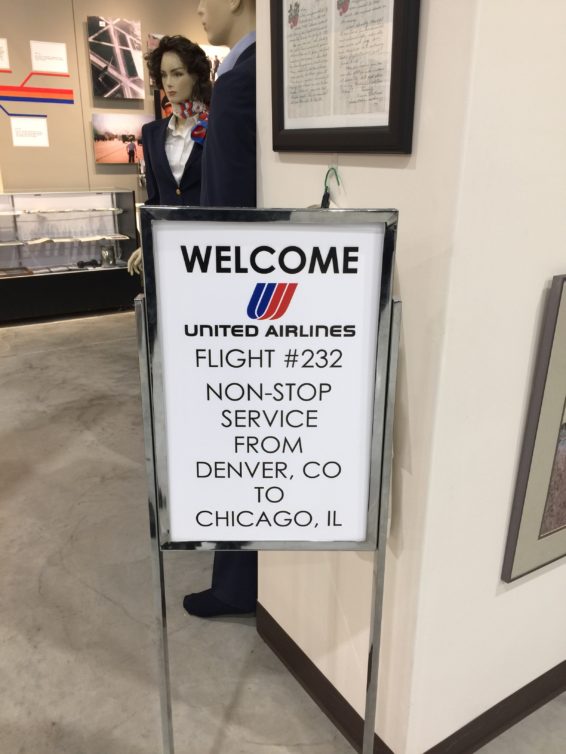 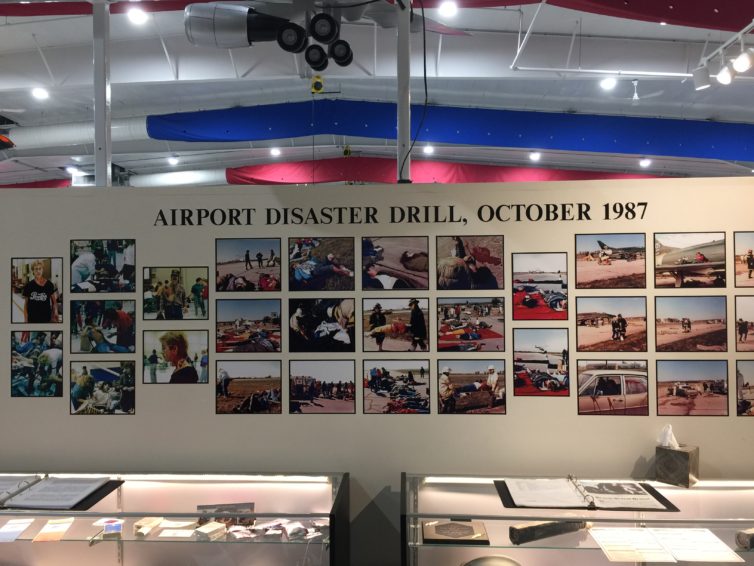 Stepping outside the museumâ€™s doors gives visitors a chance to walk to the small Flight 232 memorial located at the initial impact site. Though some of the cornfields have been replaced by a FedEx loading station now, much of the surrounding area is still farmland. It was quiet the day I visited, with the sounds of crickets and birdsongs being interrupted only by the distant roar of aircraft departures. But being outside after seeing the event records inside made it easy to orient where events happened, and visualize the chaos of the day. 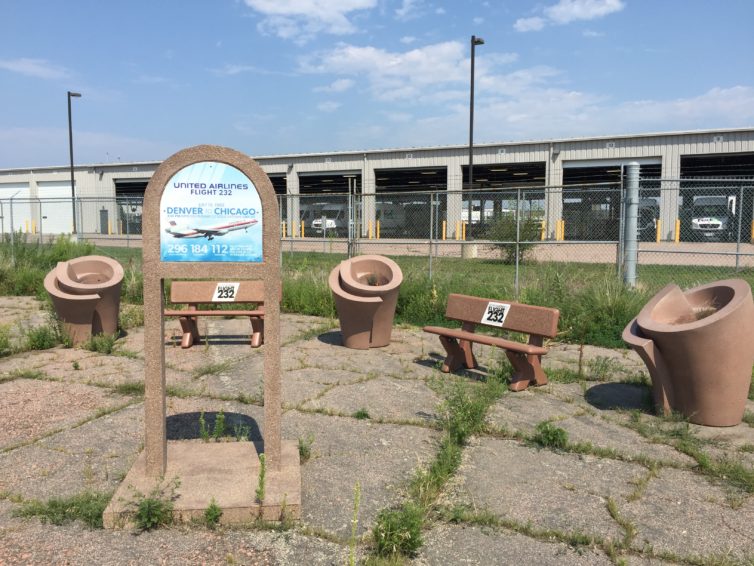 Three large aircraft are also parked outside the museum. â€œMiss Daisyâ€, the retired FedEx 727, is clearly the jewel of the group. When the passenger side of the airport modernized their jetways, the museum was able to acquire one of the ones being replaced, and set it up as a connection from the interior of the building to the inside of the aircraft. While not finished yet, plans are underway to turn the interior of the aircraft into a learning center, complete with a theater, library, and individual learning stations.

The cockpit will remain intact, as will a section of passenger seating. At the time of this writing the museum was in the process of getting the A/C units restored. Then comes electrical, plumbing for heat, and insulation. Itâ€™s a lengthy process. For the time being, the rear airstair is down, allowing visitors with a bit of imagination to stand at the door and imagine D.B Cooperâ€™s view of the world before his infamous jump. 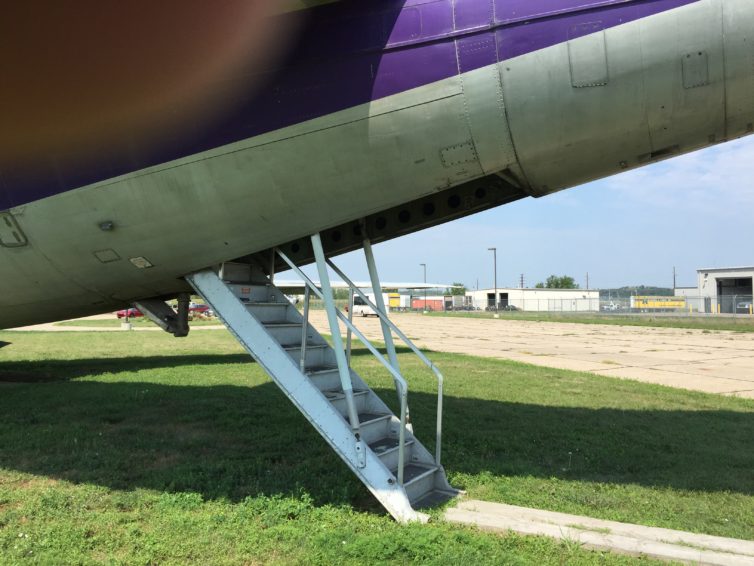 Step right up. Or down. – Photo: Aaron Giddings, Sr.

The next aircraft on the line is a C-123 transport, which, like the 727, had Sioux City as its final flight destination. A retired freight hauler, the faded interior, canvas jump seats, and intact static lines hint at stories the airframe will never tell to an outsider. 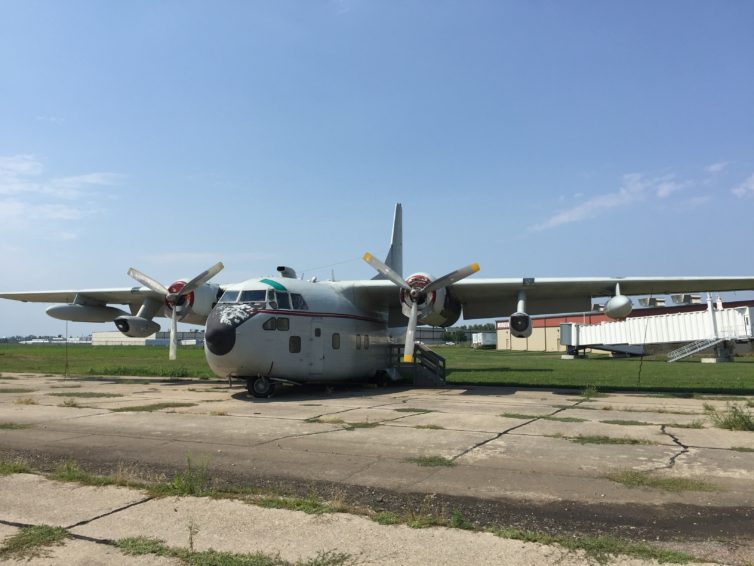 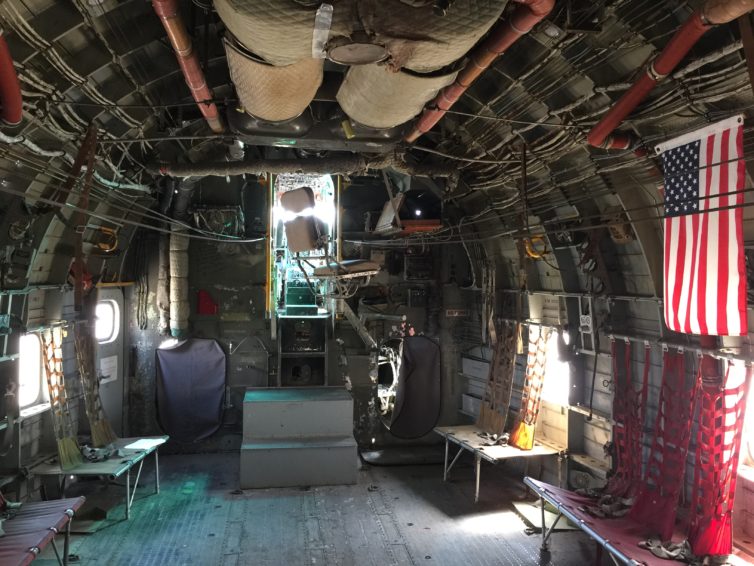 Finally, the biggest oddity of the bunch, a bulbous-nosed, twin-boom, freighter with four narrow turboprops sprouting from its high wings, and faded RAF roundels and British registration letters on its weather-beaten paint. One of only seven Armstrong-Whitworth AW.660 Argosy airframes in the world (out of an original production run of seventy-four), this aircraft is one of the two viewable in North America (with the other serving to train mechanics at Fox Field in California). It came to its final resting place by way of New Zealand, Minnesota, and Lincoln, Nebraska. The museum plans ultimately to clean out the interior, which is full of discarded airline seats and other detritus, and restore the exterior to RAF colors. 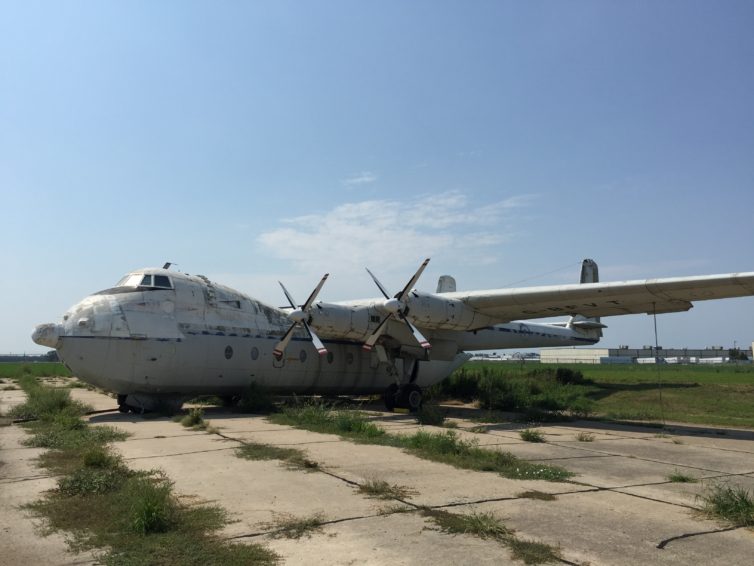 Beyond the gates of the museum, old ghosts of Sioux Gateway Airportâ€™s past can be found in a few places on the grounds. Of the hundred-plus buildings built during the airportâ€™s days as a training base, three remain. One is a large hangar, originally used to service B-17s, that now serves as the headquarters for 1 Vision Aviation, an aircraft Maintenance Repair Operation. Another is the original chapel, still in use by a local church. The third was originally a parachute repacking building, now converted to a private gun club used by members of the co-located ANG unit. 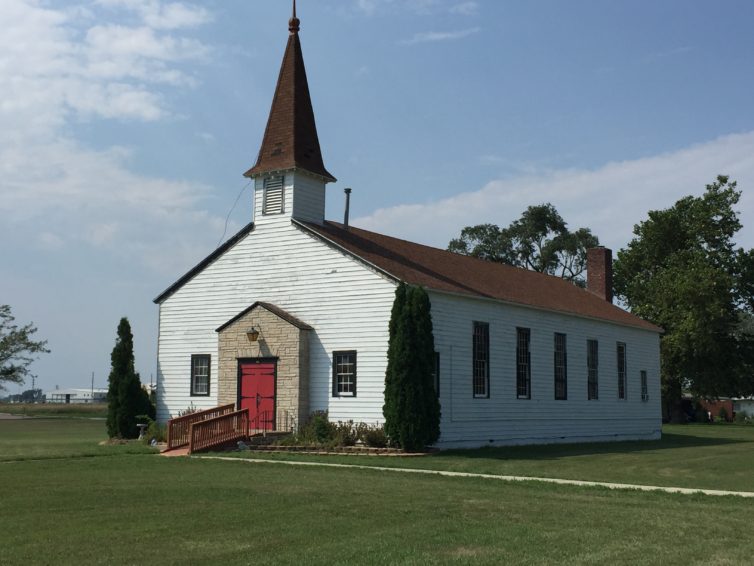 The base chapel, still home to a local church – Photo: Aaron Giddings, Sr.

Ironically, itâ€™s far easier to visit Sioux City airport by car than by air, unless one has access to a private plane. Only American Airlines (actually Envoy Air operating as American in a feeder capacity) currently services the commercial airport side, with three daily flights â€“ two to Chicago/Oâ€™Hare, and one to Dallas/Fort Worth. These are almost exclusively on Envoyâ€™s Embraer ERJ145 aircraft. Given the load factors generally associated with Sioux City, it seems unlikely that these will be replaced by Envoyâ€™s newer E175s anytime soon. 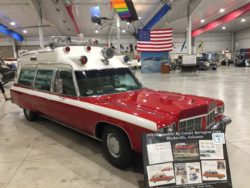 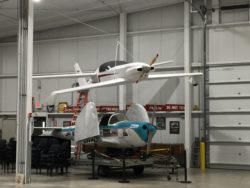 A Dragonfly hangs in static display over the Ercoupe the museum converted to a parade float. Photo: Aaron Giddings, Sr. 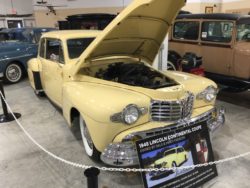 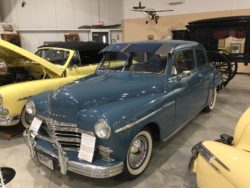 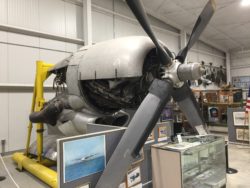 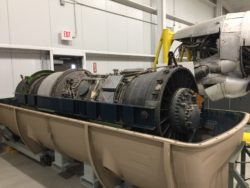 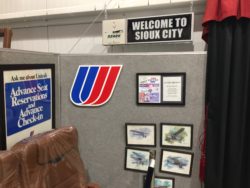 The museum also has a good amount of other airline memorabilia donated by local collectors. Photo: Aaron Giddings, Sr. 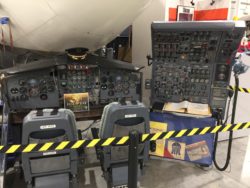 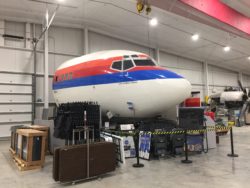 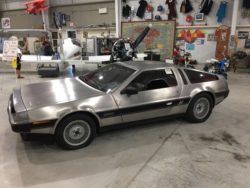 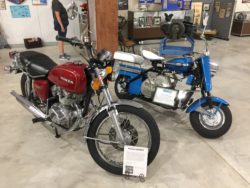 Leave it to a Harley guy to find the motorcycles. Photo: Aaron Giddings, Sr. 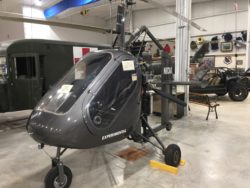 Sioux Cityâ€™s location along the Interstate 29 corridor two hours north of Omaha makes it an easy drive, and the museum, along with some of the other interesting places in the city itself (be sure to visit Palmer Candy!) make it well worth a day trip. I know Iâ€™ll be planning a return trip next spring when the sun is out, the snow has melted, and the open road is calling to my Harley.

CORRESPONDENT - SOUIX CITY, IA. Aaron is a blogger, game streamer, and software test engineer currently living beneath the traffic pattern of South Dakotaâ€™s busiest commercial airport. Heâ€™s been obsessed with aviation ever since his first flight at age four, and can frequently be found on his Harley re-enacting the motorcycle vs F-14 race from Top Gun with the ANG F-16s flying from FSD.Â

That is AWESOME! Thanks for sharing! That’s going in my bucket list… SUX … right after visting PNS and CLT. 😉

Thank you for the article! I never knew this was there. Next time I go home for a visit I am going to have to check it out!

Glad to enjoyed the article! The museum’s definitely worth a visit, and I agree – if you don’t already know it’s there, most people will just pass right by!

A beautiful DC-10 model, but youâ€™d think given the attention to detail that they would have gotten the direction of the tulip on the tail correct :/

Great eye for detail there! I don’t know how they missed that during painting, but you’re correct.

That is an unfortunate one, that I didn’t even realize. I’ve never flown into Dickinson, just ridden through there on an Iron Butt motorcycle endurance ride.

As a Huey pilot, I admire more and more every time I realize the creativity and the intelligence behind the design of UH-1 Huey. It is really amazing to fly with that machine!

I agree. That and the C-130. It’s pretty amazing that modern versions of two designs from the 1950s are still rolling off the assembly lines today!