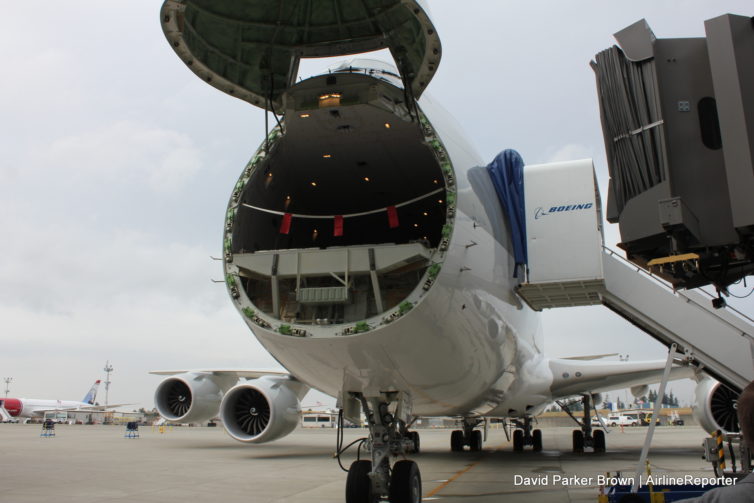 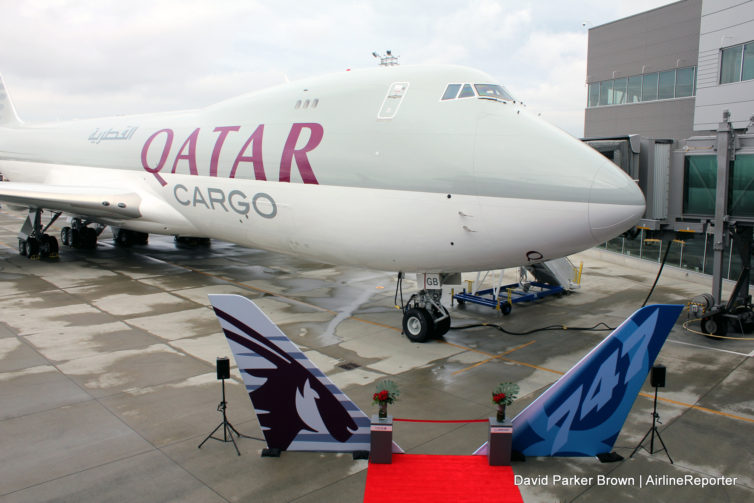 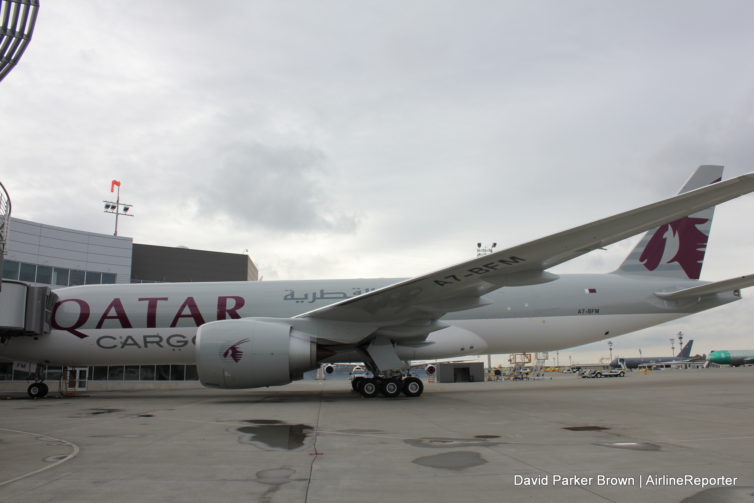 The two-engined cargo plane on the other side of the delivery center.

When I arrived at the Everett Delivery Center, the main event room had an interesting setup. Part of the room was ready for a press conference, and the other half had a bunch of tables and chairs for lunch — complete with piano. To one side was a Qatar Airways 777-200F and to the other side was the star of the party; a Boeing 747-8F. Beautiful.

After a round of photos of the plane, the press conference started. As if perfectly timed, an Emirates 777-300ER took off for a test flight. Although, few in the room seemed to notice. 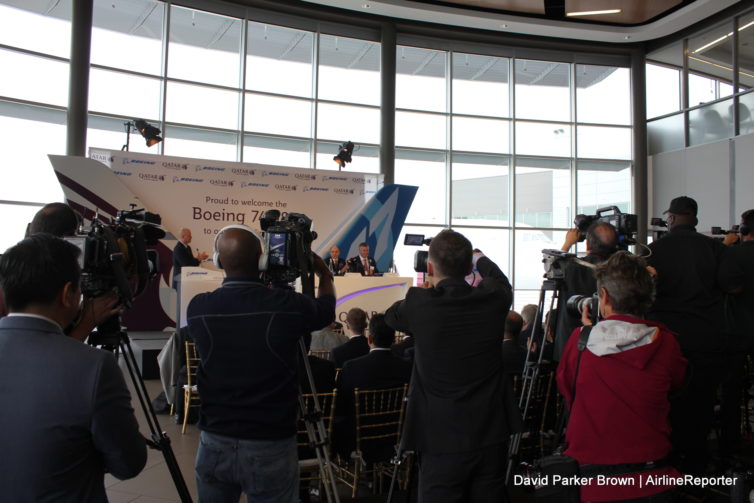 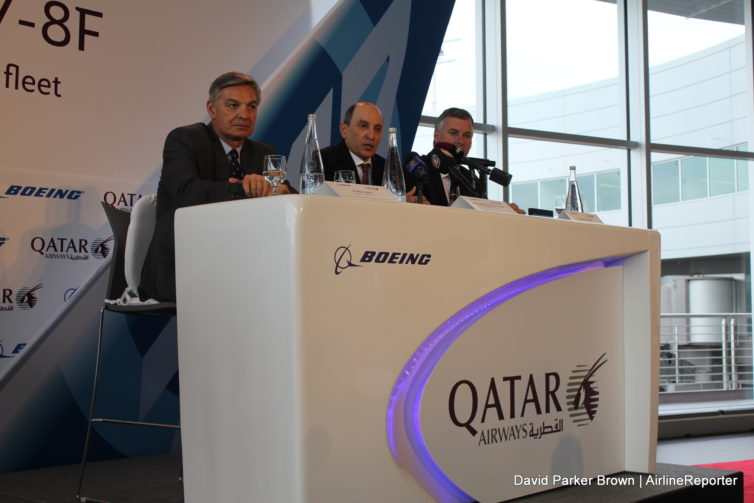 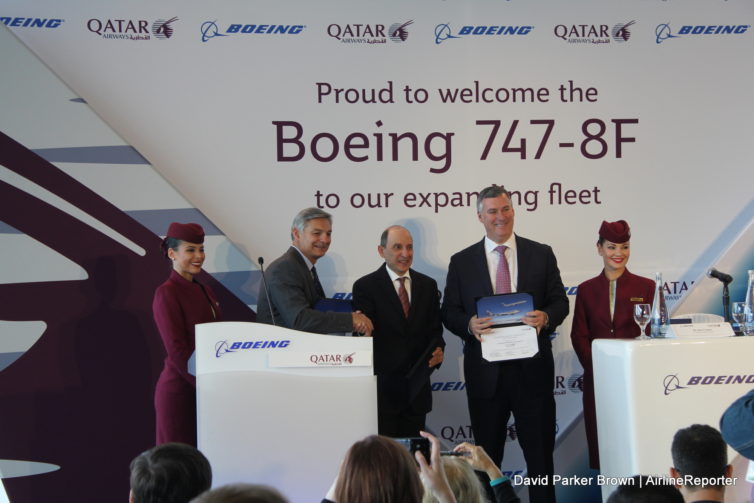 No matter how you feel about what he says, there is no question that Al Baker is passionate about his country, and his airline. However, he does seem to make some nervous.

Any time he speaks, I like to watch the airline and Boeing PR individuals to see their reactions (anxiety, fear?). You know the look. Trying to keep a smile, while also worrying about what might be said next. No question they earn their paycheck. 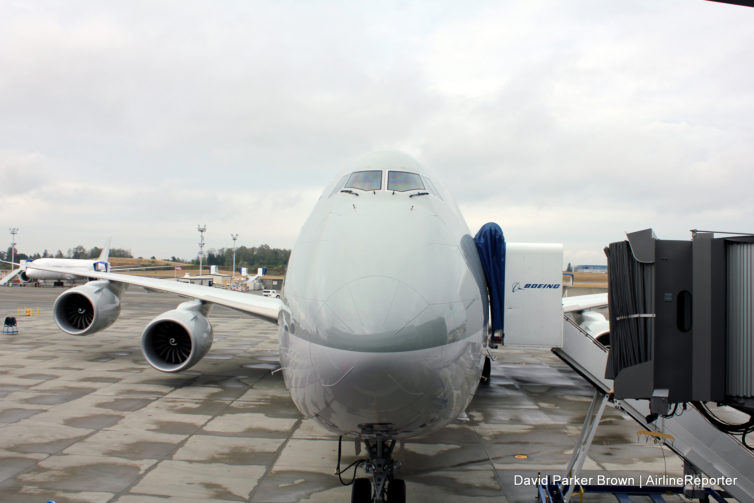 During the press conference, Al Baker was asked a political question about the recent blockade. He stated that the event was about an airplane delivery, and not politics. He was right. However, he continued to make it political, talking more about the blockade, the government subsidies, and the US3.

I sort of want to angle it back to the airplane. If you want to start a political flame war in the comments, I guess go for it. At least one person remember to talk about the cool plane, okay?! 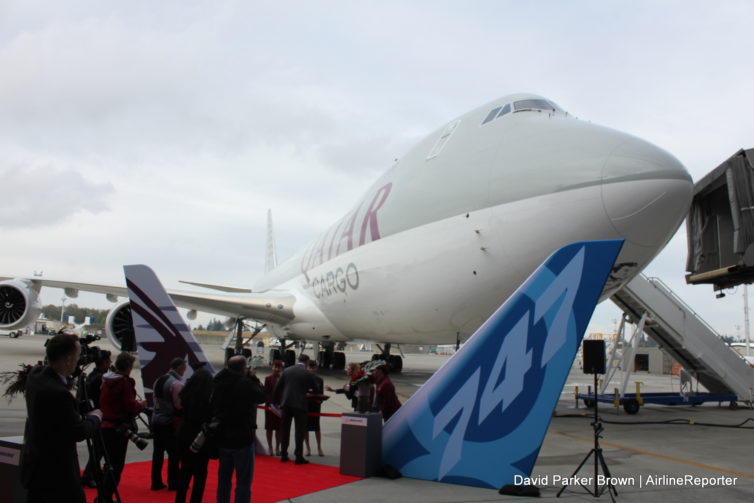 Setting up on the tarmac

The press conference wrapped up with your standard speeches from leadership, some shaking of hands, signing of papers, and then we headed down to the tarmac (yea, figured I already brought up other controversial topics, so I am going full-on and calling it a â€œtarmacâ€), for the ribbon cutting. 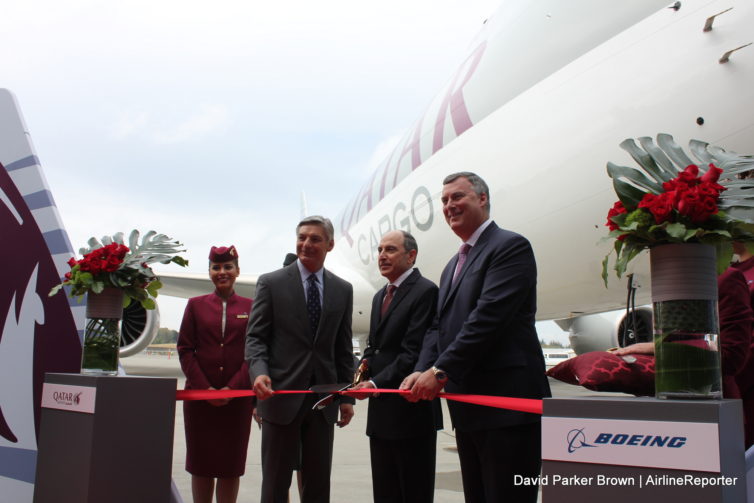 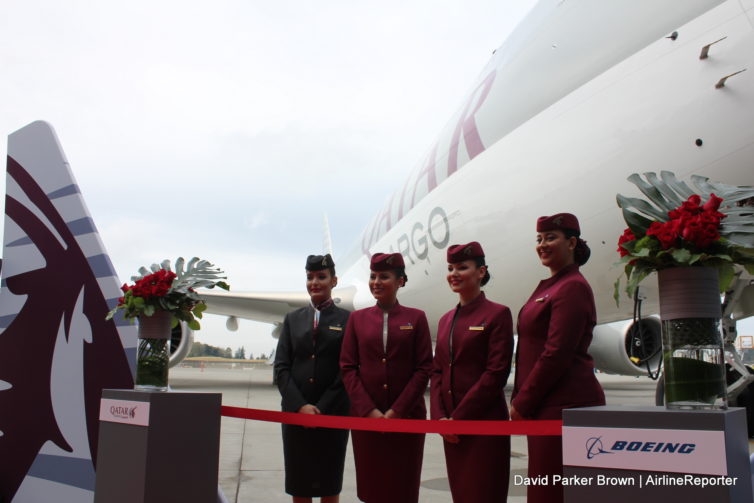 Right after the cutting I heard a noise. Hmm. Could it be? It sure wasâ€¦ the nose was lifting. 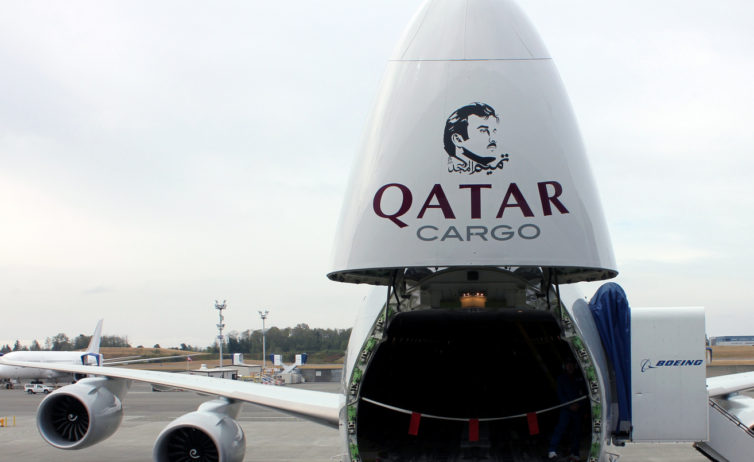 As others took photos of the people at the ribbon, I moved my way to the front of the plane. It was there that I noticed an image of a gentleman on the bottom of the nose â€“ turns out it is the Emir (leader) of Qatar;Â Tamim bin Hamad Al Thani. 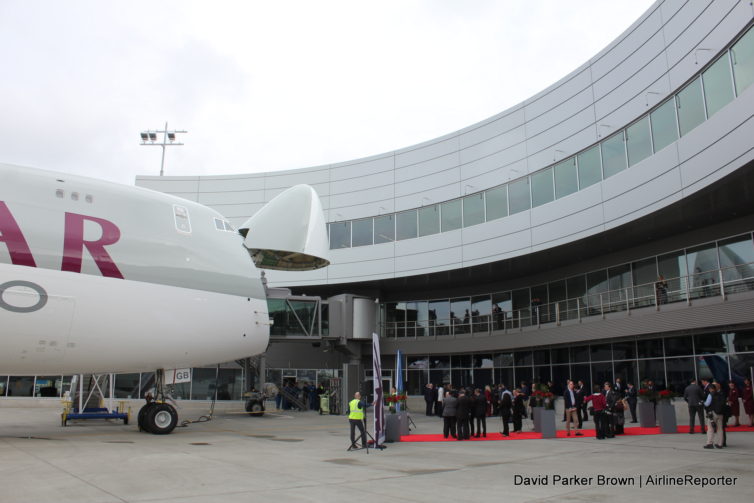 A look at the delivery center and the nose still up.

Then it was back upstairs for a nice lunch, before taking some last shots of the 747. I asked if I could go inside the plane for a tour, but no go. Checking out the inside of a 747F still remains on my AvGeek bucket list. I have the harder-to-get An-124 and Beluga, but the 747F still eludes me. 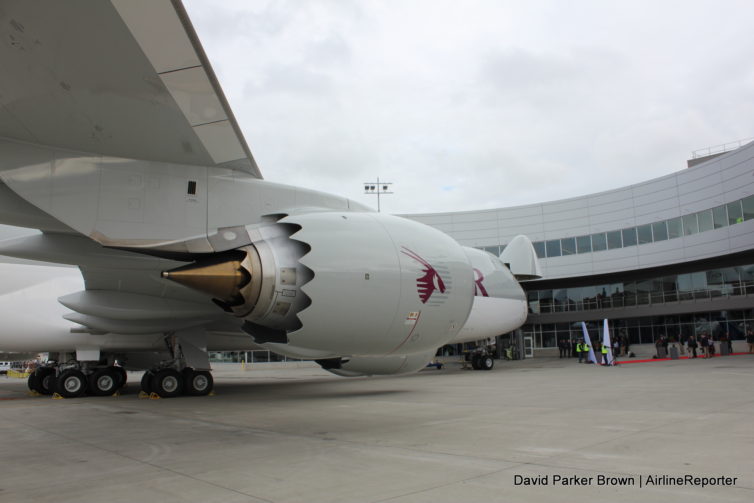 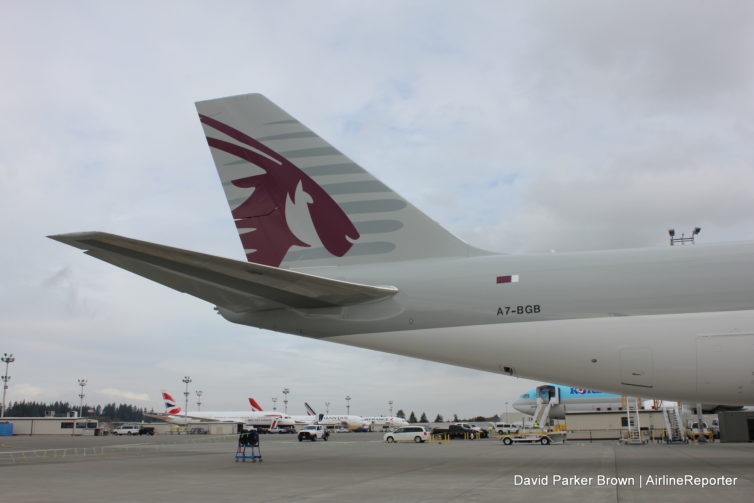 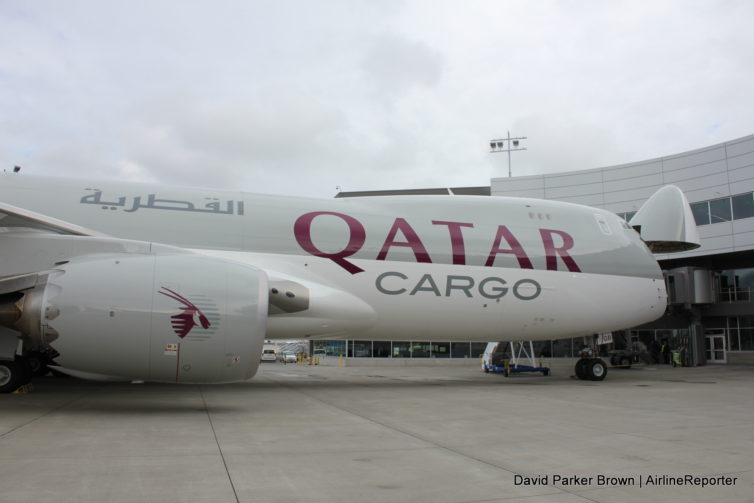 During the conference, Al Baker did mention that if his two 747s do well, he might look at another. By no means will this save the 747 from retirement, but it will delay it by just a little and I am totally okay with that.

Did Al Baker fly home in one of his new freighters?

The Queen of the Sky’s should remain in the skys

Let’s hope that lasts for quite a bit longer!

We (UPS Airlines) just had our first Dash-8 delivered this past Friday (10/7) as well!

I had never seen the front cargo door open before (except in diagrams)!!!!! Thanks!

Wow, this is the ultimate experience , well done guys you are trail blazers in the aviation industry

60 minutes had an interesting segment this evening. It appears that due to the embargo they have experienced recently, the cargo portion of the airline has become a vital lifeline. They have imported thousands of cows for milk by airlift. Many from here in Wisconsin.
I would not be surprised to see more freighters ordered in the near term.
Great article.

Now that would make a great story — cows from Wisconsin to Doha! 🙂