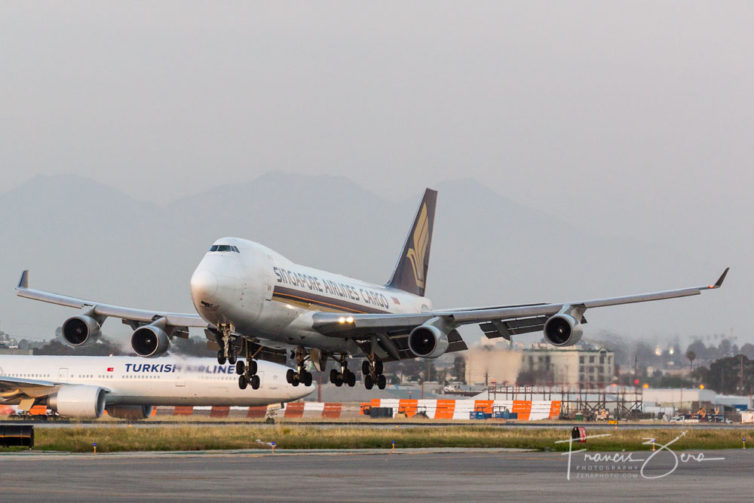 A SIA Cargo 744F, seconds before touchdown at LAX, with a Turkish Airlines 777 waiting to depart.

During my tour, I had a chance to speak with Singapore’s LAX cargo manager, and he explained that about 30 percent of SIA’s global system-wide cargo is transported by dedicated SIA Cargo aircraft. Just to destinations to the U.S., it is about 50 percent. Those are impressive percentages, but the entire cargo fleet is made up of Boeing 747-400Fsâ€” seven of them. 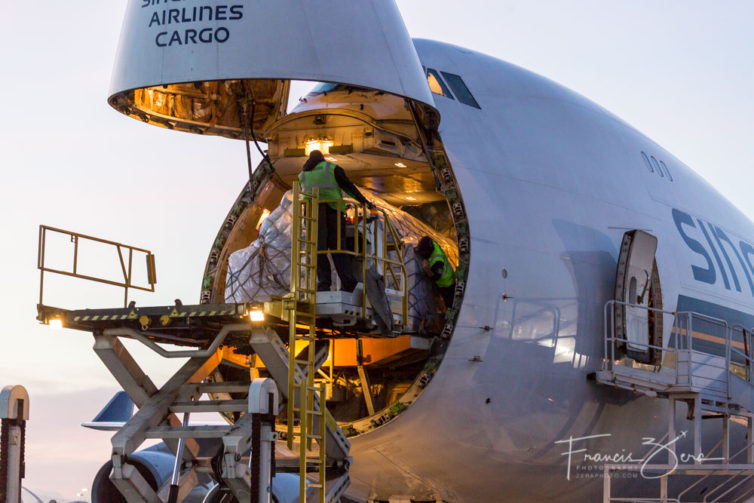 Unloading the cargo from the nose.

There are nearly 30 dedicated cargo airlines that operate at LAX today. In 2015, there was more than 2.1 million tons of air freight, valued at nearly $101.4 billion, that passed through the airport.

LAX ranks 12th in the world and fifth in the U.S. in terms of air cargo tonnage processed. This is big business. 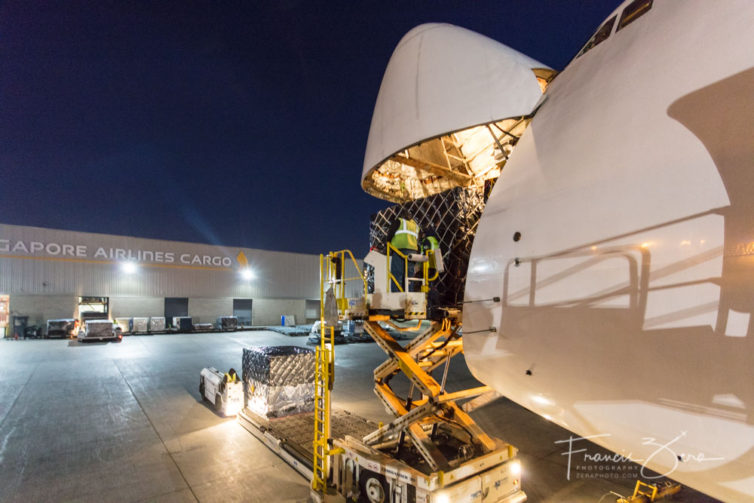 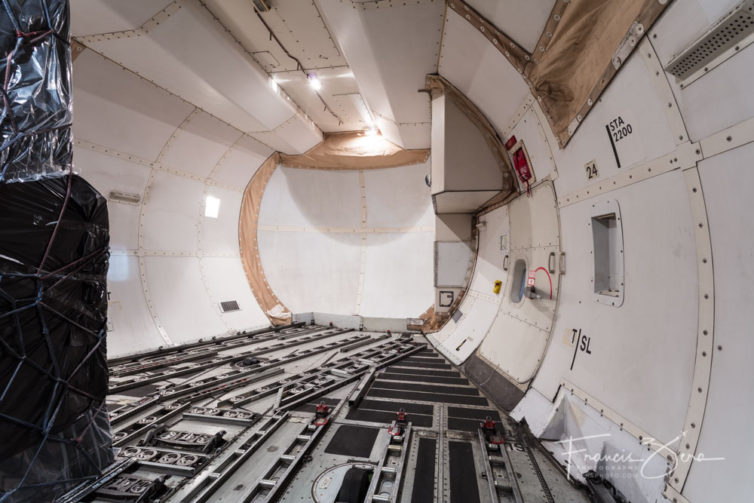 This is the aft pressure bulkhead. It gets pretty narrow back there, but there is still usable space.

SIA also owns Scoot and SilkAir. Scoot operates budget passenger flights with widebody aircraft, while SilkAir operates full-service passenger flights with narrow-body aircraft. Neither of these airlines fly to LAX, or even the U.S. (although Scoot will start Honolulu service by the end of the year), but they are a part of SIA’s bigger cargo network. 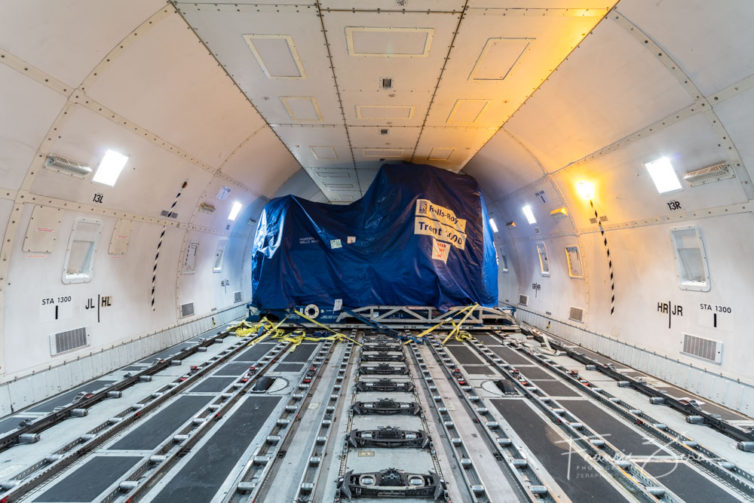 The 744F’s cavernous interior is large enough to contain a new Rolls Royce Trent 1000 jet engine. Sideways. With plenty of room to spare.

That means air freight can easily be distributed among passenger flights on SIA-owned airlines. Many long-haul passenger jets are equipped with large cargo doors and can accommodate pallet freight in the spaces below the passenger compartment, and regional jets can handle smaller items. It all offers quite a bit of flexibility for customer and the airline. 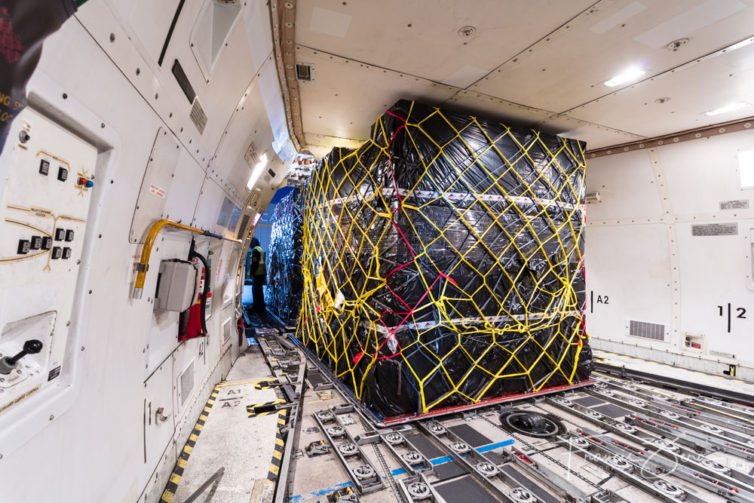 Cargo is organized onto pallets, which are moved into position inside the plane on an ingenious system of motorized rollers. Once in position, the pallets are locked into place. These pallets are being offloaded via the nose door.

“Together with dedicated freighter cargo space, we market and sell SIA Cargo as a seamless, unified brand and service,” Bradbury-Boyd explained. “Cargo is managed by the same group cargo team, using the same system platform. For example, for a shipment from San Francisco to Sydney, SIA Cargo may accept the consignment at SFO with a single airway bill, but then transfer it to LAX via truck for uplift on our freighter operating from LAX to SIN, before transferring the shipment to the belly-hold of a Scoot flight for the SIN to SYD sector.” 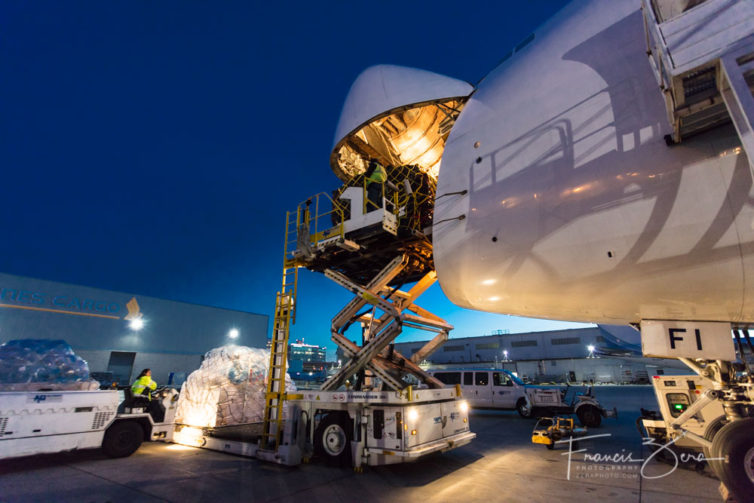 It doesn’t take many people to unload the cargo.

Back on the ramp, it’s always surprising to see how few people are needed to unload such a large aircraft – about a half-dozen ground crew used large scissor lifts and forklifts to empty the plane in short order. 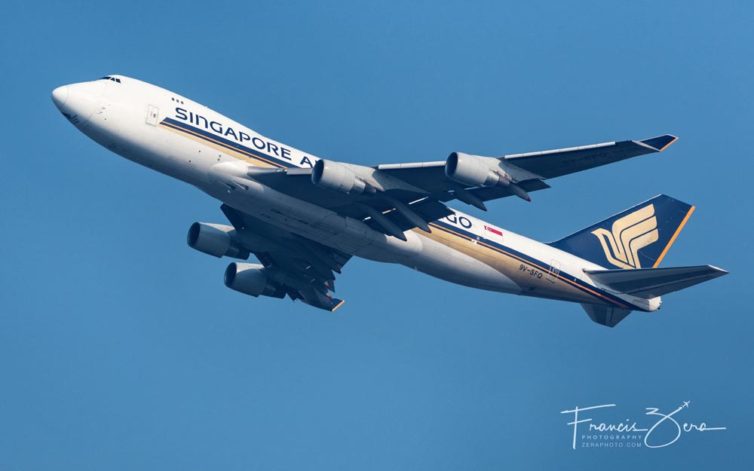 SIA Cargo also delivers cargo on an as-needed basis to airports where it doesn’t have scheduled operations. This means they’re an occasional visitor to airports that normally do not see the Singapore livery. I recently got to catch one of their 747-400Fs departing my hometown airport of Seattle. 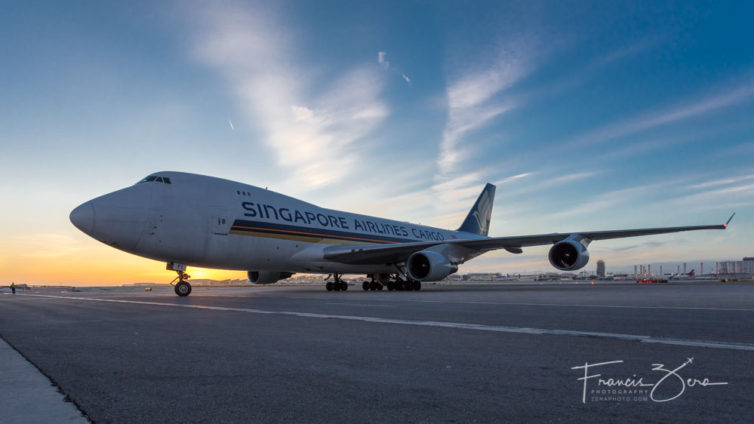 “Singapore Airlines isnâ€™t just about cargo at LAX. They also operate full-service passenger flights with widebody aircraft (i.e. the Boeing 777 and Airbus A380).”

Good catch Joe, but that was actually me on the back end doing the edits to the story that added it. I missed the memo and didn’t realize the A380s weren’t flying anymore. Super sad, but I get it!

I wonder what the upper floor on a Freighter 747 looks like – I imagine it is pretty spartan, but one would think there is plenty of room for good crew rest at least.

A factory-built 747 freighter has a small version of a standard galley with food storage, food warming, ice, a coffee maker, etc. There is also a lav (of course), flashlights and other safety gear mounted on the walls, as well as anywhere from four to six first-class style partially reclining seats. The back wall of the upstairs cabin has a door that leads to two crew rest areas. On passenger 747’s that have been converted to freighters, the upper deck is longer and may contain more seats that can recline further.

Here’s a video showing a quick tour of the upper deck of a factory-built freighter:

Sing Cargo is a prime candidate for 747-8F; to eventually replace their 744Fs. I’ve anticipated an order for quite a while!

Btw, my four flights on Singapore 380s were fabulous! The cabin of the 380 is extraordinarily quiet – even at the rear of the cabin behind the engines! I rank my Singapore flights as the best I’ve ever had – even better than my several flights on Emirates; many years ago!

The photo above with the caption of “This is the first class nose section â€” cargo style.” is labeled incorrectly. That is the pressure bulkhead wall at the rear of the aircraft. (Side note – the “black boxes” are inside that gray protrusion extending out from the upper wall on the right.)

We can see that the nose was open during loading / unloading in the other pics, and is a much larger area that has exposed insulation on the walls (visible in the other pics). There is also no sidewall door that close to the nose. The pic of the rear wall appears to have been taken while standing just aft of the rear cargo door.

*Someone* who shall remain nameless on our senior editing staff changed the caption on me. Don’t worry, he’ll get teased relentlessly about not knowing front from back as punishment. 😉

I had a pretty good idea that this was the case, Francis. Hard to mistake the two when you were there taking the pics. Then again, simply looking at the pics here also makes it rather difficult to confuse them…but I digress. 🙂

Man I hate those senior editors! A 400 word story and I think I messed up with every edit I made :).

Thanks for the great report!
Most of the AvGeek world understands that the 744 is dying (being retired) by the numbers. Few carries need that long haul capacity and even fewer can afford to fuel them. That said, the 744F remains viable on many routes. As far as I know, only three PAX carriers currently fly the 748-i and prospects for future sales are dim at best. In the same breath, the 748F is a reasonably good seller and virtually all of the backlog is for freighters; capacity and range offset some fuel costs and the 748F’s fuel costs are far less. You get the picture… The 748-i’s fuel costs are far less than the 744’s, but few carriers need that capacity and long legs in today’s market. It really IS that simple. The three that fly the 8i report being pleased, but Boeing cannot build a profitable sales program around three carriers. I do not recall how many 748i’s are in service, but the total number remains small. It remains a great airplane, much loved by the pilots who fly them. Sad. or a celebration of excellence, I do not know. I tend to think a little of both.

The simple reply to RAY got lost in the mess; it is not worth rewriting, so I’m calling a night. The only important statement was that I’m delighted to learn that UPS has become a 748F user. A Very Smart Move by UPS and yes, I hope the airplane works in their demanding application. (Good company, at least until the parcel reaches the destination city.)