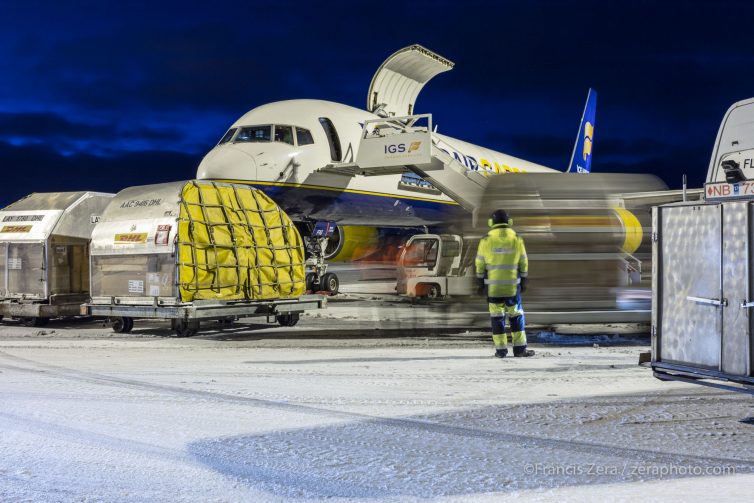 Air freight has always held a particular fascination for me; the mechanical logistics are fascinating, and, despite the fact that freight operations happen concurrently with passenger flights, many travelers don’t even notice that freight ops are happening all around them during their journey. 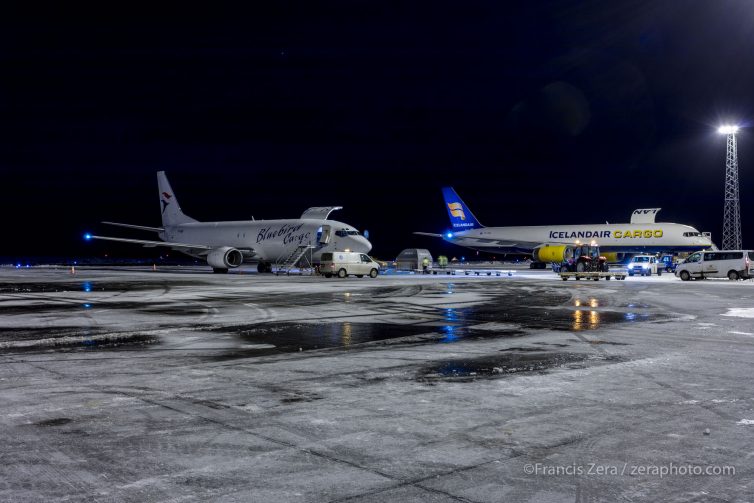 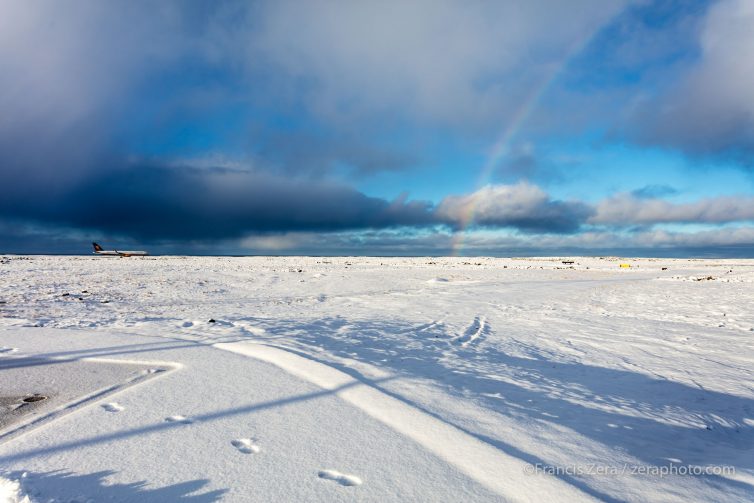 The distances between parking stands seem exceptionally vast at KEF

Keflavik Cargo Project Manager Aà°alsteinn Kornelà­us Gunnarsson said that in one month in 2015, about 2,500 tons of cargo passed through the airport. Of that amount, 1,250 tons – or about half – was carried in the holds of passenger aircraft. 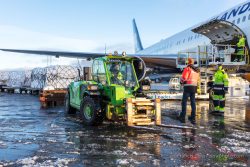 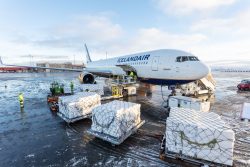 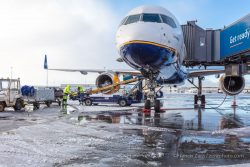 ’œIn 2008, we had 16 percent of our cargo in the passenger belly in Icelandair planes, now we have over 50 percent in passenger planes, therefore maximizing belly space, and helping the environment reducing emissions,’ Gunnarsson said. 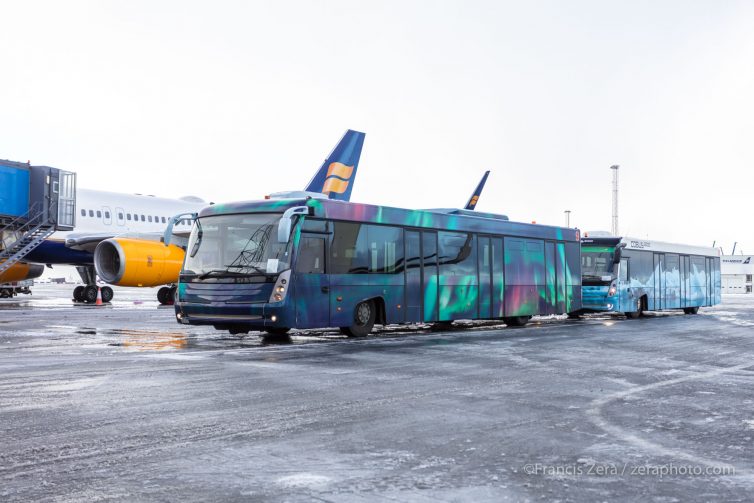 Even the shuttle buses have auroras

Gunnarsson said Icelandair maintains cargo warehouses in Keflavà­k and Reykjavà­k in Iceland; in New York City; and in Liege, Belgium. They simply rent cargo space when needed at other airports. 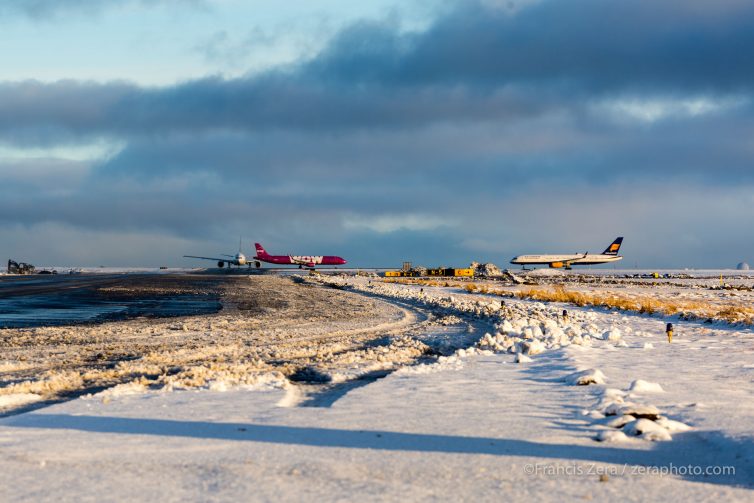 The airport is experiencing a surge in traffic to accommodate all those tourists. Budget carrier WOW Air is KEF’s second-largest airline.

According to Statistics Iceland, nearly two million tourists visited Iceland in 2015, and those visits seem to be spread relatively evenly throughout the year; there were far more tourists than I’d expected to find there in early February. 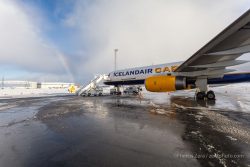 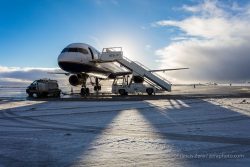 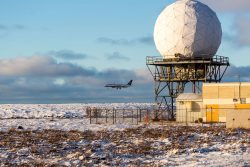 A volcanic island nation of 330,000, the country has a subarctic climate and relies heavily on imports of nearly all goods – from food and clothing to technology and industrial goods. So there are a lot of passenger flights on which to load cargo. For perspective, Iceland is a bit more than half the size of Washington state (39,682 sq. mi. vs. 71,362 sq. mi.), with a 2016 population of 331,778, compared with Washington’s 7,288,000. 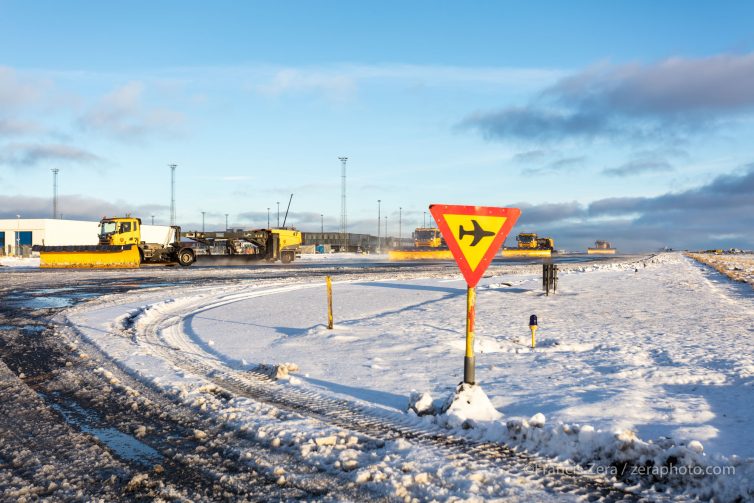 Icelandair’s operations staff were wonderfully helpful and seemed very happy to show off the airport, driving me to various remote stands where one of their 757-200F cargo planes was being loaded, to another near their warehouse where large pallets of freight were being loaded into the capacious hold of one of the airline’s recently-acquired 767s.

A Volga-Dnepr Airlines An-124 had come in while I was there, and it didn’t take much convincing to get them to drive to the far side of the airport so we could all have a good look at the enormous freighter. 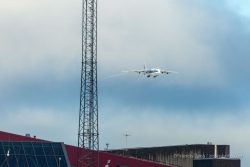 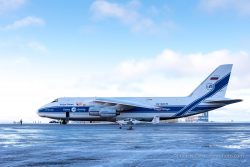 A Volga-Dnepr Airlines An124 made an appearance during our tour. KEF has a long history as a mid-Atlantic stopover point. 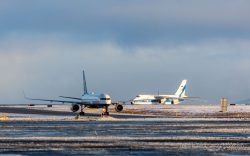 At these latitudes in early February, the sun doesn’t rise until almost 10 a.m., and twilight seems to last for hours; it’s my favorite time of day for photography, so I thoroughly enjoyed every bit of it. 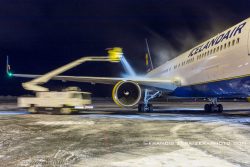 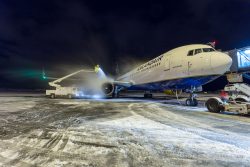 A 757-200 is de-iced in preparation for departure from KEF airport. 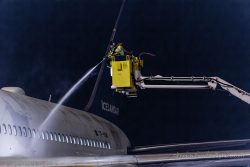 I wanted to see what cold-weather operations really looked like, and Iceland didn’t disappoint in that regard. By turns, it was windy, cold, rainy, snowy, and sunny, all in the span of a couple of hours, and the airport operated smoothly throughout. It was a lovely experience.

http://www.zeraphoto.com
Je Reve: Dreaming on the Air France 787-9 from London to Paris
LUCKY! Flying Aer Lingus Business Class on an Airbus A330
5 Comments

I wanted to see what cold-weather operations really looked like…..Should have visited ORD ramp winter of ’78-’79. Didn’t find some equipment till summer.

Icelandair’s DeLorean was in the shop, so I had to travel conventionally via a 757; sadly, no time travel for me this trip.

Wonderful photos as usual and as I have come to expect from Francis Zera!

Best Airport I have ever been through !